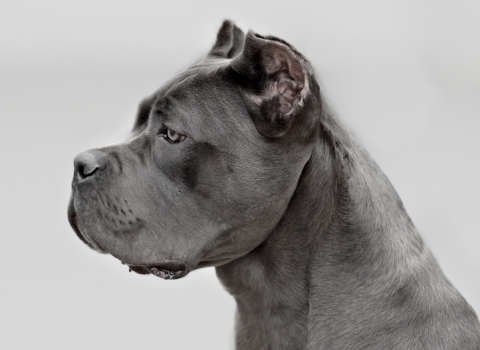 Stop, in the Name of Type

In the Cane Corso, the area where the muzzle meets the face can make or break a correct head
By
Denise Flaim

There is nothing fragile about a Cane Corso.

Except, maybe, for type.

Type, if you need to be reminded, are all those traits that, when taken together, identify any given dog as a member of a particular breed. Type encompasses both physical traits– such as proportion, coat and color – and unseen ones, including character and drive.

In Cane Corsos, as in most Molossers, the head plays a huge role in establishing type. And of all the Molosser breeds, the Corso arguably has the least consistency in type overall – and in head type in particular.

To be sure, every breed struggles to maintain type: Without clever selection, breeds inevitably drift. But when it comes to maintaining all those traits that identify the Cane Corso, this upstanding Italian breed must contend with a double whammy.

First, the Corso has a very close cousin, the Neapolitan Mastiff. While some argue the two are essential “dry” and “wet” versions of the same breed, I disagree: Photos from the 1930s of the first Corsos in the United States – owned by Rudolph Valentino, no less – depict dogs that could never be confused with Neos. But type in the two breeds can sometimes drift too close for comfort, which is why knowing the differences in head type between them – and we’re not just talking about amount of wrinkle – is fundamental.

Second, we have the reverberations of the Cane Corso’s modern “recovery.” When the Corso was reconstituted in the 1980s, a number of other breeds were used as “filler,” because there simply was not a large enough gene pool to expand the breed population without unacceptably high levels of inbreeding. Breeds that offered desired characteristics – including Boxers, Bullmastiffs, Neapolitan Mastiffs and Rottweilers – were tossed into the mix.

Most purebred dog fanciers are chauvinists, in the sense that they focus on their breed to the exclusion of all others, and Cane Corso breeders are no exception. However, in a breed as young and – let’s face it – genetically muddled as the Corso, breeders cannot afford such myopia. Almost every facet of the Cane Corso head – from eyes to stop to skull to muzzle – can be adversely impacted by influences from other breeds. Often these differences are subtle, which goes back to the point about the fragility of Cane Corso type that started this article.

In this article, we’ll look at the lower part of the Cane Corso head – the stop and muzzle. We’ll save the more complex geometry lesson – head planes and skull configuration – for the next discussion.

Let’s start in the middle of the head, at the stop, where the muzzle meets the foreface.

Several summers ago, I was fortunate enough to spend an afternoon with Anna Battaglia of Antico Cereberus on her farm in Mantova. Battaglia, in case you don’t know, raised Basir, the dog on which the Cane Corso standard is based. She instilled in me that a correct Cane Corso stop is deep – so deep you should be able to put your thumb in the depression between the eyes. This is the result of the furrow created by the Corso’s very developed frontal sinuses and the prominent arch above the eyes.

Years later, a Boxer breeder told me that their old-timers always said that when a Boxer’s stop is correct, you can rest a marble in the depression between the eyes, and it will not roll out.

The difference between these two descriptions is the key to understanding the correct Cane Corso stop.

Make like a hitchhiker, and the look at the underside of your thumb. See how it gently curves? That is the contour of the correct Corso stop. True, it is deep: If you imagine your thumb nestled in a Corso’s stop, the furrow that is so important to Corso head type would rise up on either side of your finger. 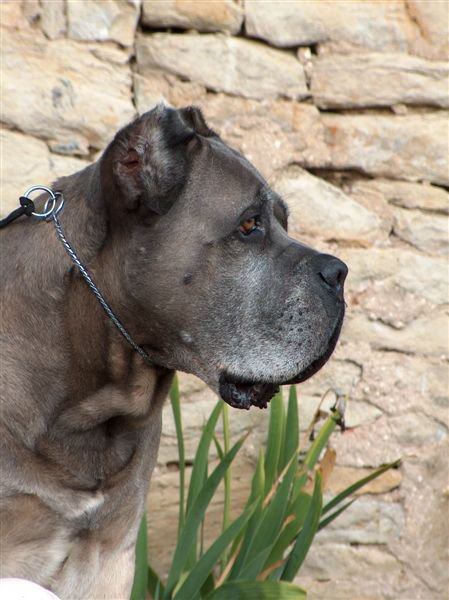 Jones, an important European Corso who has all the right ingredients as far as head type: a well-pronounced brow that creates the furrow between the eyes; a well-developed but not extreme stop; and a strong, deep and adequately long muzzle.

But the difference? In the Boxer, the tip of the nose is slightly higher than the root of the muzzle. While not dished like a Pointer, that upwardly angled muzzle creates the obstacle that keeps our imaginary marble in place.

The top of the Cane Corso muzzle, by contrast, is a straight line, parallel to the ground. With no ascending nose plan to constrain it, that imaginary marble would simply acknowledge gravity and roll off.

Let’s continue on with the Boxer muzzle, because there is another important lesson here. Central to Boxer type is upsweep of chin, in which the underjaw curves up, making it visible from every angle, front and side. This dramatic upsweep is created by multiple factors, including an undershot bite; a short, or brachycephalic muzzle that is one-third the length of the head; and a tipped-back nose, which is created by the upwardly angled muzzle that we just described.

(Those very same criteria apply to the Dogue de Bordeaux, yet another breed said to have been used in the Corso, although not as extensively. As in the Boxer, in the Dogue a broad and prominently upswept chin is a non-negotiable aspect of head type. And to prove that the Corso is hardly the only Molosser breed that has cross-pollinated, the Dogue standard disqualifies dogs with white on the head and body. Boxer, anyone?) 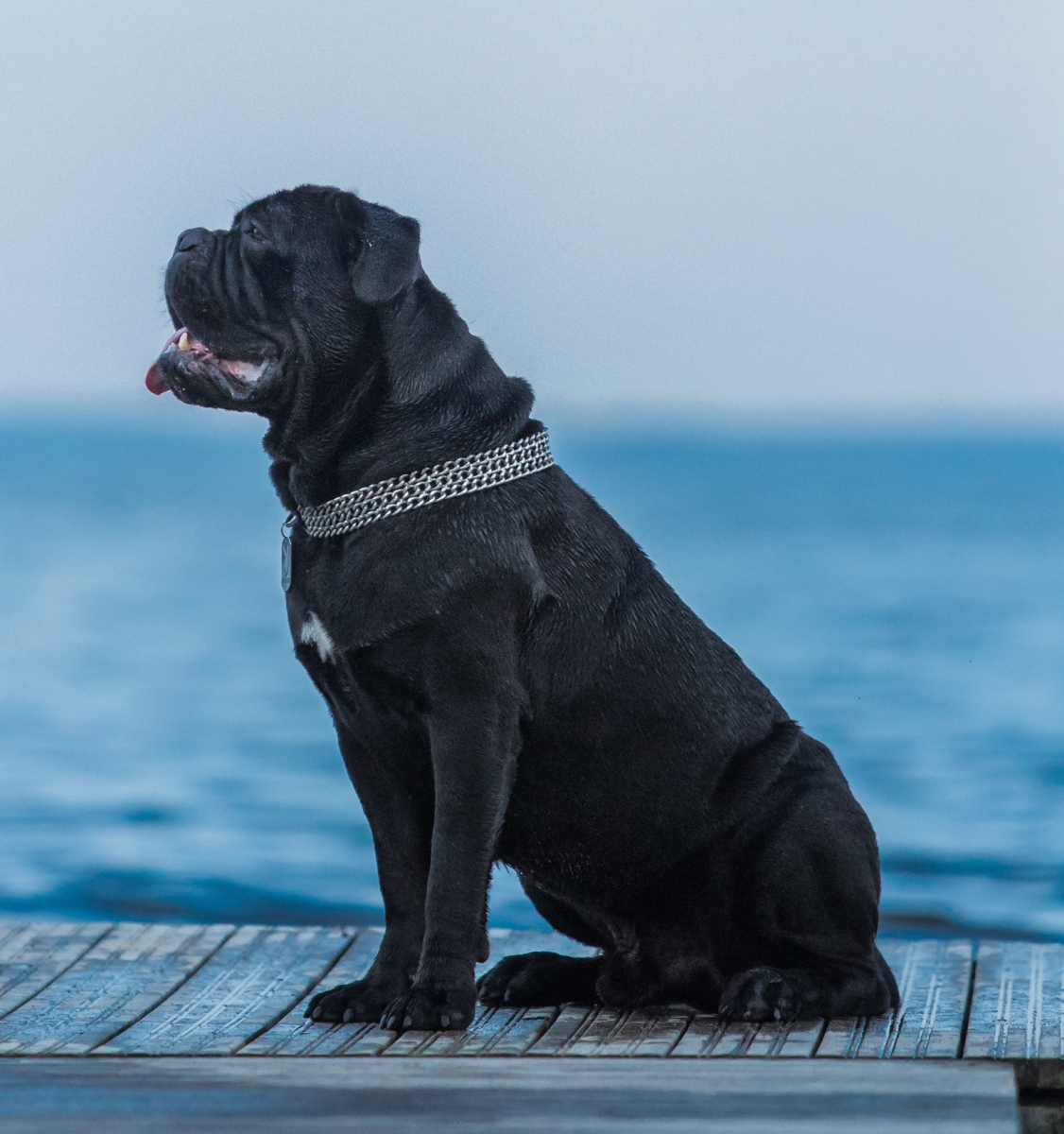 Corsos with hypertypically short muzzles can often be misidentified as another breed altogether.

Not coincidentally, Cane Corso muzzles are growing ever-shorter and more extreme. This is of course understandable, given those very undershot breeds in its background – not just the Boxer and Dogue, but also the Bullmastiff, which also has muzzle-to-skull proportions of one-third to two-thirds.

Unfortunately, when it comes to muzzle length, the current AKC Cane Corso standard is not much help in curbing these exaggeratedly short muzzles, saying only that the muzzle “reaches approximately one third of the total length of the head.” This allows for – maybe even encourages – the incorrect interpretation that the muzzle can be somewhat shorter than a third.

The Cane Corso Association of America has convened two committees in as many years to revise the current standard, and it is my understanding that both have sought to change the wording to say the muzzle is slightly more than a third of the total length of the head. To underscore this point, breeder-judge Shauna DeMoss notes that the aforementioned Basir had a muzzle that was 38 percent the length of his head, fitting that description perfectly.

I used to believe that the AKC standard for the Corso was too permissive in its acceptance of a scissors bite, even though it added the caveat that it needed to be accompanied by correct head and muzzle parameters. But DeMoss told me something from her perspective as a long-time breeder that made me rethink that objection: She notes periodically, breeding to a correctly headed dog with a scissors bite is required to keep the dogs from becoming too undershot.

So there you have it: In a Corso, you want a deep furrow between the eyes. You want a stop that is well defined as a result of those well-developed and bulging frontal sinuses and brow. You want a wide, deep muzzle that is not less than a third the length of the skull – ideally, slightly longer – and you want the top of that muzzle parallel to the ground.

(Basically, the stop, length and upper plane of muzzle and muzzle-to-skull proportions in the Corso and Rottweiler are almost identical, though the Corso has a more pronounced brow, and the skulls are completely different. Those stops that look like the dogs are wearing backward-facing baseball caps? Incorrect for both breeds.)

And let’s recap what we don’t want:

If you look head on at a Corso and you do not see a pronounced, deep furrow between the eyes, think Great Dane. And think wrong.

If you see a muzzle that looks like a compressed cupcake at the end of a Corso’s face, think Boxer or Bullmastiff. And think wrong.

If you see a tipped-back nose that is higher than the point where the muzzle meets the face, think Boxer. And think wrong.

Next, we'll trace that frontal furrow upward and take our discussion to the nuances of the Cane Corso skull. Stay tuned!

© Modern Molosser Magazine. This article may not be reposted, reprinted, rewritten, excerpted or otherwise duplicated in any medium without the express written permission of the publisher.
Fri, 04/10/2020 - 9:30pm