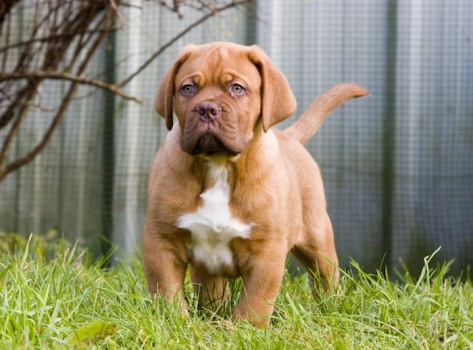 How much white is too much white? It’s an ongoing debate among Dogue de Bordeaux fanciers
By
Denise Flaim

When it comes to white markings in the Dogue de Bordeaux, there are lots of shades of gray.

The standard is the standard, of course, and both the FCI and AKC blueprints for the Dogue de Bordeaux have specifics about how much white is acceptable – and where it can and cannot be located. But when it comes to interpreting this language – and balancing it against other important, non-cosmetic qualities, such as structure and movement – things are not quite so clear cut.

As in other breeds (including many of the Molossers covered in this magazine), the Dogue de Bordeaux may have white markings, but the standard seeks to keep the color under control by limiting how much is allowed. In both the AKC and FCI standards, white is permissible on the chest and toes, though the newly revised FCI standard is more specific about the location of the white, and how severely it is to be faulted.

Jennifer Roberts of Rising Star Bordeaux in Boulder, Colo., who co-chairs the judges’ education committee of the Dogue de Bordeaux Society of America, says she finds herself in debates with judges over white at many of the club’s breed seminars. The section of the standard that AKC judges are struggling with, she says, is the disqualification for “white on the head or body.”

“The issue is the term ‘body,’” Roberts says. “Some judges say that in actual dog anatomy, the chest is not included in the ‘body.’ But other judges have argued that that is not true, that the body does include the chest.” 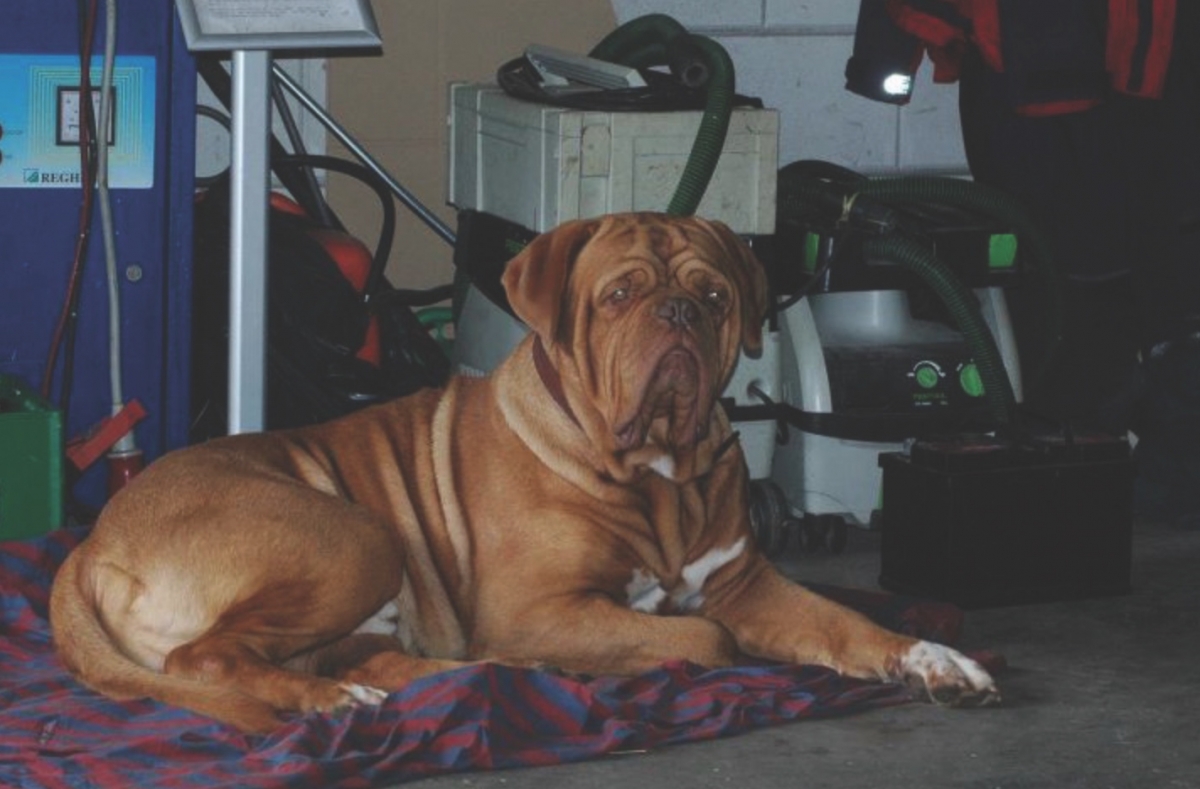 Dutch breeder Jan Dijkstra showed this photo of a 14-month-old male to a new breeder, and the immediate response was, “Wow, look at all that white.” “When I see this photo, I think, ‘Wow, what a great dog,’” Dijkstra says. “Perfect head, and I hope he moves just as good as he looks.’”

A holistic reading of the AKC standard would lead to the conclusion that the chest is not intended to be covered in the disqualification, since the standard does specify that “limited white patches are permissible on the chest and the extremities of the limbs.” Nonetheless, Roberts says, once the club is able to change its standard to clarify that language, it will. Since parent clubs can only change the standard every five years, and the Dogue de Bordeaux standard was only officially accepted and the breed recognized in 2007, that leaves at least another year of living with the current standard.

When it does embark on a revision of the standard, the DDBSA will have a template to follow. Several years ago, the FCI Dogue de Bordeaux standard was amended, under the watchful eye of Raymond Triquet, the world-respected breed authority who authored the first modern standard.

In the updated FCI standard, the language restricting white on the chest was sharpened to say limited white patches are permissible on the “forechest,” replacing the more general “chest.” Presumably, this was to address white patches that travel up the neck in a stripe, or spill across the front of the dog. The new standard also added a mention of white markings to the list of “severe faults”: “White, without interruption, on the front of the body from the forechest to the throat.”

Triquet notes that the stricter language in the standard was intended to stop the color from creeping onto the face and neck. “What we do not want,” he says, “is a lot of white patterning, like the blaze on a Boxer.”   (For his part, Triquet is also opposed to the appearance of new colors such as “chocolate,” which is also a disqualification in the new standard. The correct Dogue de Bordeaux coat has lighter areas over the shoulders, he says, and is not a flat, unvariegated color such as brown.) 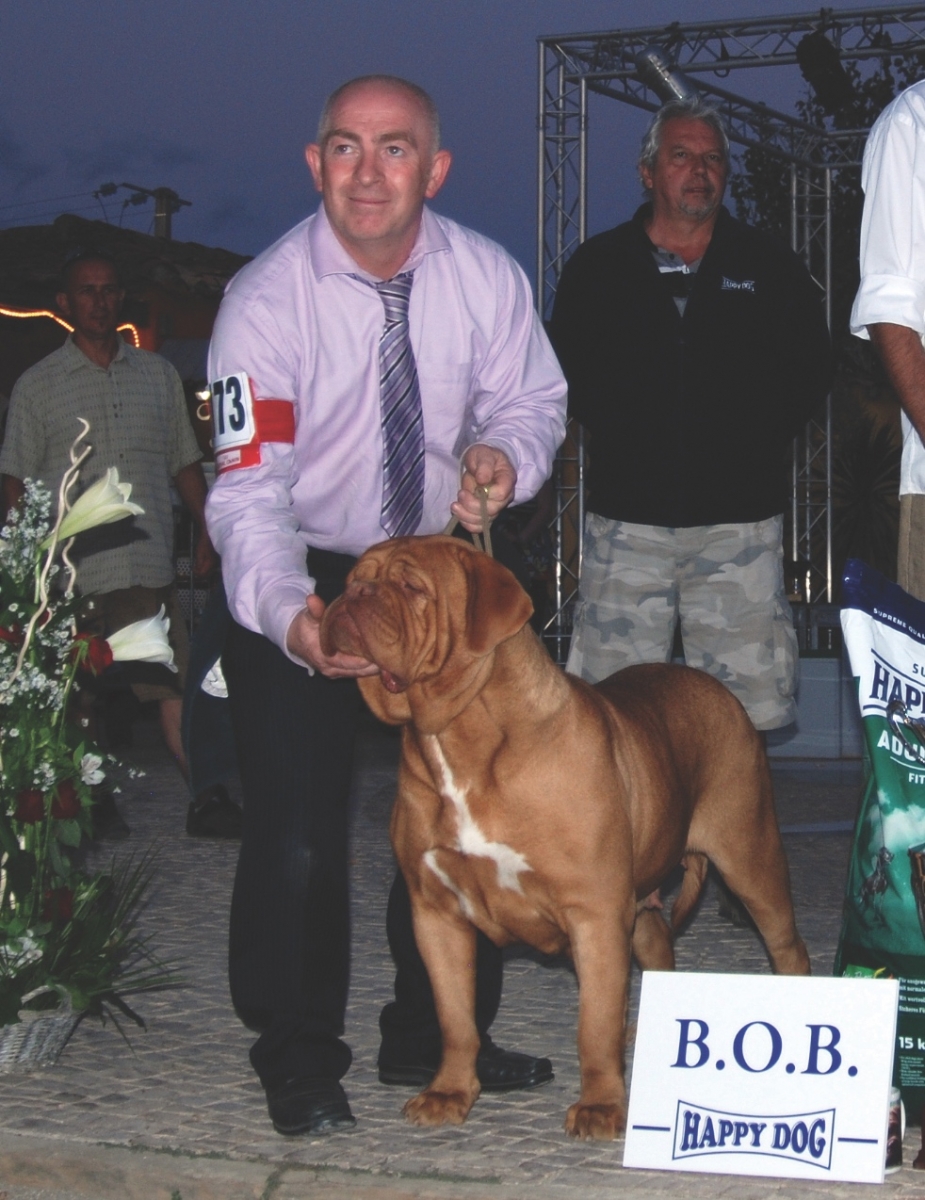 One of the winningest Dogue de Bordeaux bitches ever, Tyrannus Skyejacketed by Emberez. The angle and her drawn-up skin in this photo accentuate the white creeping up her throat. It has not stopped respected Dogue specialists from giving her top honors.

Both the AKC and FCI standards are clear about where white should end on the feet – up to the pasterns, and no more. “Where it is a gray area is the white up the chest to the neck,” Roberts says. “Several Dogues have a small of white patch on the neck, or the white goes uninterrupted up to the neck. The French have said the second is a ‘severe’ fault, but not a DQ. The white patch on the neck would be a fault, but a minor one.”

Certain lines are known to produce more white than others, Roberts says, adding that many breeders are aware of this and breed cautiously. “If you breed two dogs with excessive white, you are likely to produce puppies that have white on the head or body somewhere,” she explains. “We have seen photos of Dogue de Bordeaux litters that could be mistaken for Boxers with the amount of white markings on them. But as a general rule, the small patch on the neck, or even a large white patch on the chest is not something frowned upon. In the grand scheme of things, type, structure and health are far more important in breeding stock.”

The problem, unfortunately, is that white markings are easier to identify than more complicated traits such as correct front angulation or balance, making them an easy target for fault judges or inexperienced breeders. 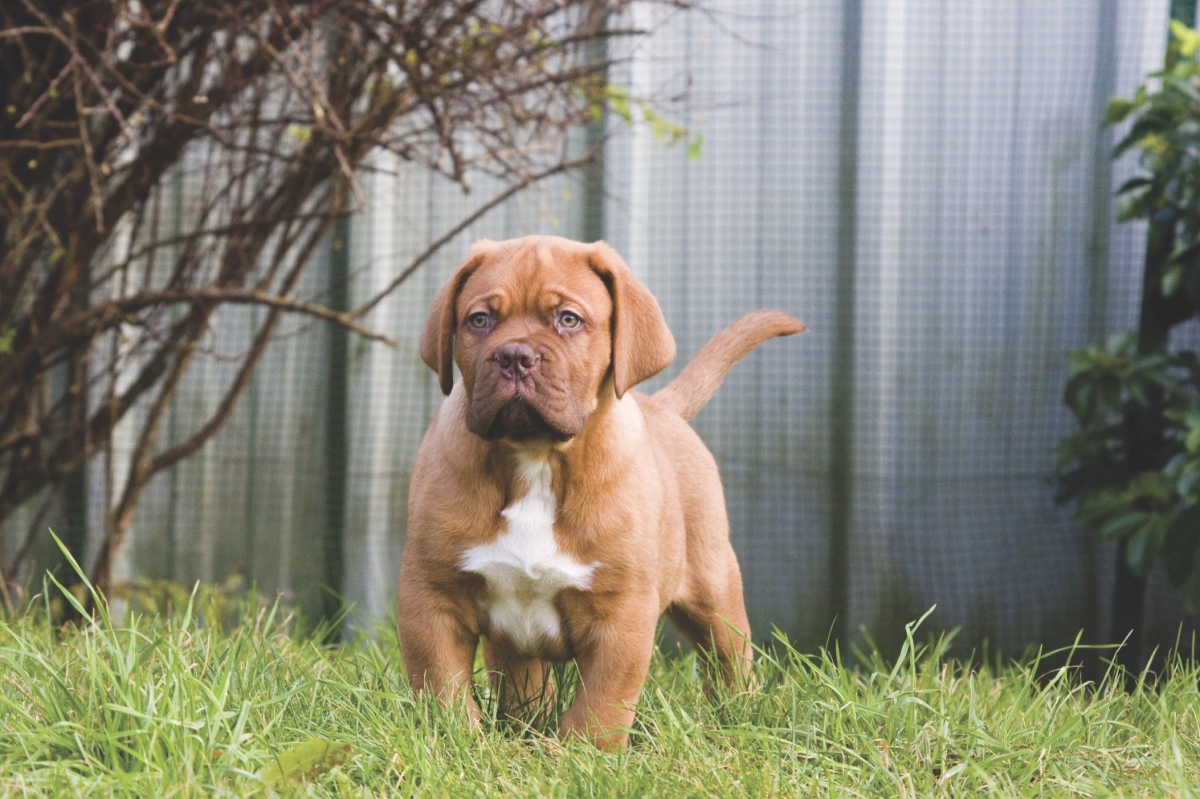 White on puppies can be deceiving. Depending on the breeder, this might be too much for some.

“It seems many people in the breed start to get crazy about the white, and with that they don’t see the quality of the dogs anymore,” says Jan Dijkstra of the De Legeane kennel in the Netherlands. “If you go to the club show in France, you’d be surprised to see all the different types there – if out of 300 dogs, there are 30 that come close to the standard in terms of type, that’s a lot.”

Before nitpicking over cosmetic issues, breeders and judges should first make sure that the dog has type, Dijkstra says, launching into a favorite analogy: “If I want to have a Ferrari Testarossa, then first it has to be build like a Ferrari and have the shape of a Ferrari. Second, it needs to have the power and speed of a Ferrari.

“A white Ferrari is still a Ferrari,” concludes Dijkstra, referring to the fact that the luxury sports car is traditionally a candy-apple “race red.” “And a Lada” – for American readers, that would be a Russian-made economy car similar to a Hyundai – “a Lada in Ferrari red stays a Lada.”

Anne-Marie Class, the well-known Dogue specialist judge from France, notes that excessive white might be more of a concern in the whelping box than in the ring. “In my opinion, even if the standard is now more precise about white, it is a question of being careful with it when you breed,” she says. “Yes, we sometimes we see examples of too much white, but not so much or so many.”

When discussing anything to do with the Dogue de Bordeaux, it is always useful to return to Triquet, who wrote about excessive white in his sought-after book The Saga of the Dogue de Bordeaux: “White on the chest is permitted but not desirable if it is too extensive,” he writes. “On the lower legs, white should be unobtrusive. Where white is to be seen, on the front of the leg, it shouldn’t reach above the carpus and tarsus (wrist and hock).

“On the back of the front leg, it is accepted that the white may reach slightly higher, for it is scarcely visible,” Triquet continues. “It occurs frequently that the white on the front of the foreleg reaches to the wrist, on the back it reaches halfway, sometimes with a small line to the elbow. It’s not what is aimed for, but if the dog has quality, it should be not excused because of this.”   For judges who find this subjectivity maddening, Triquet reminds of a favorite quote from the famous Italian judge Mario Perricone: “The judge is not a robot.”   In other words, in the end judges must arrive at a decision based on their own knowledge and sense of responsibility to the breed as a whole. And that is never a matter of black or white.

What the Standards Say

Limited white patches are permissible on the chest and the extremities of the limbs. Fault: White on the tip of the tail, or on the front part of the forelegs above the carpus and the tarsus. Disqualification: White on the head or body, or any coat color other than shades of fawn.

FCI Limited white patches are permissible on the forechest and the extremities of the limbs.Severe fault: White on tip of tail or on the front part of the forelegs, above the carpus (wrist) and the tarsus (hock) or white, without interruption, on the front of the body from the forechest to the throat. Disqualifying fault: White on the head or body, any other color of the coat than fawn (shaded or not) and in particular brindle or solid brown called “chocolate” (each hair being entirely brown).

Some judges are stymied over how heavily to penalize excessive white. These photos, provided courtesy of DDBSA Judges Education, show some different markings and to what extend they might be faulted. 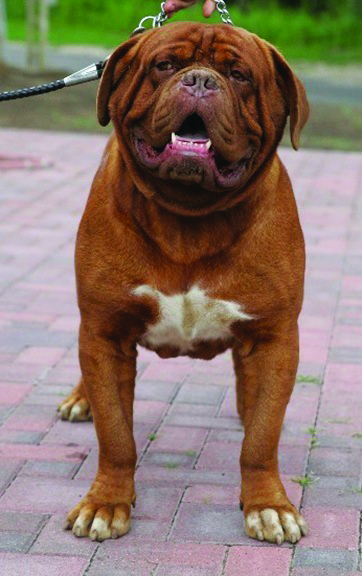 An example of acceptable white on the chest and feet. 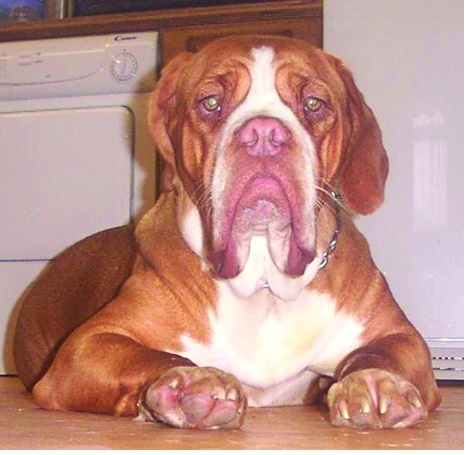 A clear case of disqualifying white. The appearance is almost that of a Boxer. 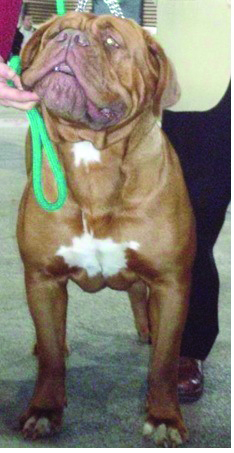 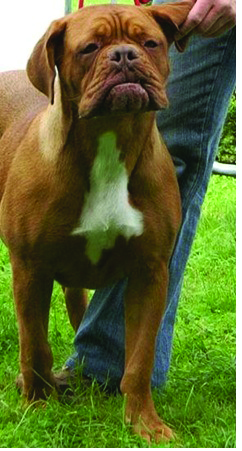 Two dogs with what is considered “invasive white.” This amount of white falls into the “not preferred” category, but certainly is not a disqualification. 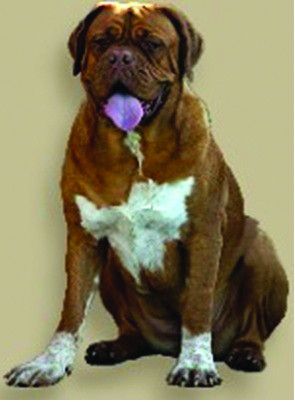 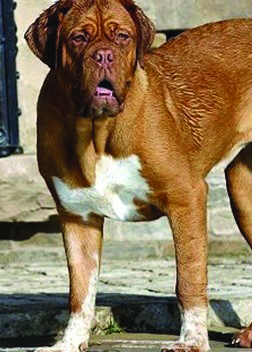 Two examples of “excessive white,” which is a severe fault.
© Modern Molosser Magazine. This article may not be reposted, reprinted, rewritten, excerpted or otherwise duplicated in any medium without the express written permission of the publisher.
Sun, 08/07/2016 - 7:54pm