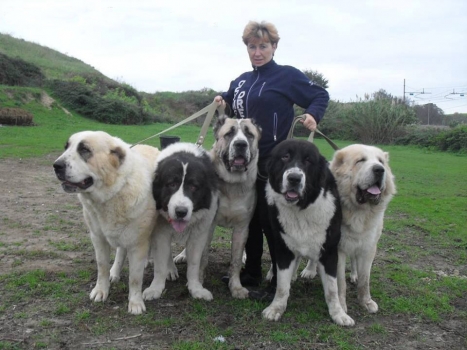 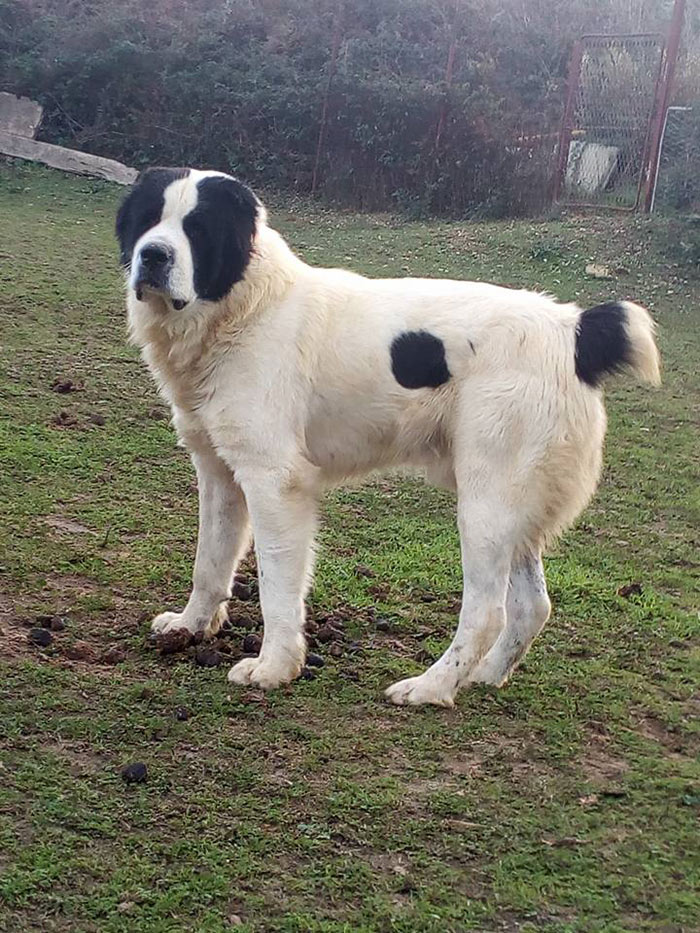 My passion for dogs started in 1982, when my uncle gave me a Collie. From that moment, I started to study that breed with great commitment. After I familiarized myself with all the bloodlines, I was asked to head the Collie club in my city.

At the time I thought that the Collie the best dog in the world, and I would never change breeds. But fate had a different plan in store.

On a university holiday in 1990, I went with my husband and friends to Turkmenistan to meet the Central Asian Shepherd Dog. At that time the breed was little known in Russia, and there were very few examples in the country.

In the capital of Ashgabat we met a fellow who promised to show us good dogs and invited us to his house in Tedgen, an oasis city in the Karakum Desert. Then he took us to the neighboring villages and to the desert, where grazing sheep were guarded by dogs. In Turkmenistan these dogs are called Alabai, which means “rich with spots.”

When our off-road vehicle arrived near the stable where the sheep were sheltered, we were surrounded by six or seven huge dogs who would not allow us to exit. We were stuck in the car until a shepherd arrived. He gave orders to the dogs to get away and invited us to take tea and have a chat.

We marveled at his dogs’ beauty, intelligence and obedience, and asked if he had puppies. He replied that in the barn was a puppy den that one of his females had dug. And so we acquired our first Central Asian Shepherd Dog. 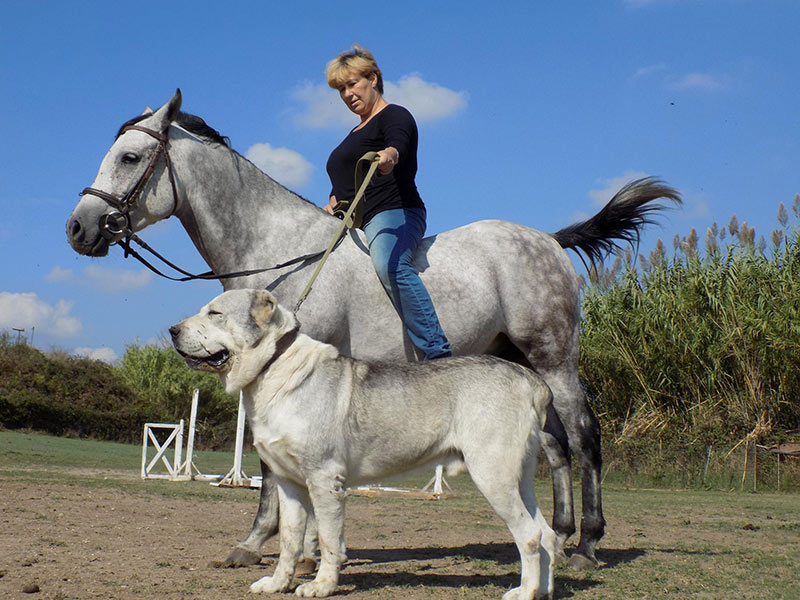 In the villages, dogs guard property, but, living on the outskirts of Rome, Italy, I need a dog who isn’t too aggressive. In the Turkmen culture, dogs should not attack women, children or animals. If the dog bites a woman or a child in the street, he is killed; if he does not guard the property entrusted to him, he will not be fed.

These types of rules mean that the breed developed its own ability to think and reason. If someone wants to enter the property, the dog blocks passage and shows his teeth. Hopefully, that is enough to deter the unwanted visitor. But if the intruder ignores this warning and continues walking, the dog attacks, slams the person to the ground and waits for the arrival of his owner. If a person retreats, the dog does not attack.

For children, Central Asians are reliable friends. One of the females we acquired in Turkmenistan guarded our newborn son without training. One day friends whom she had known since she was a puppy came to visit. As soon as they entered, she was delighted and allowed herself to be petted. We went into the living room and the dog walked away. After chatting for a while, our friends asked to see our son. I answered that he was the bedroom napping and they could peek in and see him. One minute later they came back, unsuccessful. The dog had laid down next near the cradle, and when they wanted to get in, had blocked their passage and started growling in a serious way.

I gave my uncle one of the sons of this female. One day, a repairman came to fix the TV. Only my grandmother was home, as well as that dog, who was two years old. My grandmother stepped out for a moment, and after the repairman finished his work, he discovered the dog lying in front of the door. When the man approached, the dog snarled, and refused to heed any commands. The repairman had to wait until my grandmother returned before he was free to leave.

I tell these stories to show how these dogs reason things in their own way. For them, only their owner can give orders. 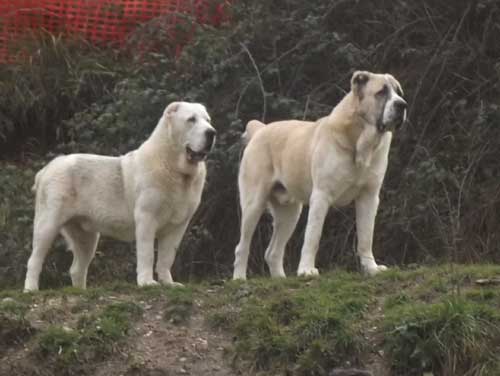 The Central Asian Shepherd Dog is a molossoid breed that was developed on a vast Asian territory, including Turkmenistan, Tajikistan, Kazakhstan, Uzbekistan and Kyrgyzstan. It is among the oldest breeds in the world. In the north of Iran, an ancient vase was found depicting a shepherd with dogs that are similar to the Central Asian dogs of today. Dating to 2000 B.C., this vase is currently located in the Louvre museum in France.

Given the vast territory in which this breed developed, it evolved in different ways, with different physical characteristics. But all Central Asian Shepherd Dogs share large size, robust bone, powerful and strong structure, and the big head with a strong muzzle. Coat length may vary, between short, medium and long, and may have different colors.

In the countries of Central Asia, dog fights are very popular. This was originally done to train the dog to fight wolves. Dogs have their ears cropped and tails docked because in battle they are severely injured. Dogs that fight well protect sheep from wolves. Twenty-five years ago in Turkmenistan, if a dog won fights, the prizes were cars and villas. A good fighter was very expensive, and puppies from him were given only to very good friends. The most famous fighter of the late 1980s and early ’90s was named Akgush. In his entire life, he lost only one fight. The blood of this male is in our kennel. 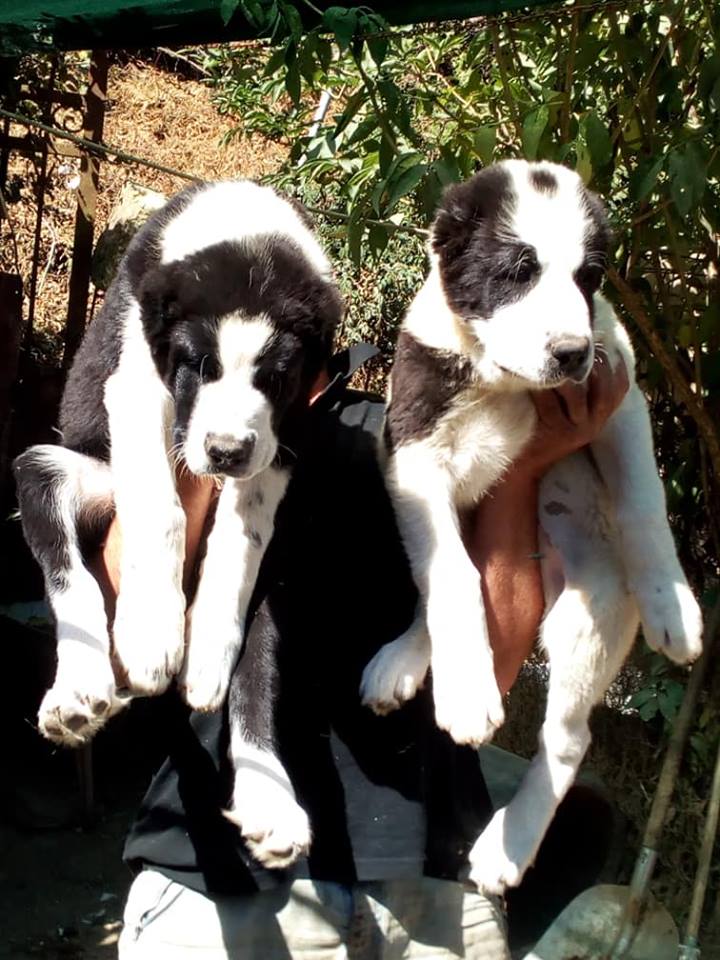 Though reprehensible to most Western dog fanciers, even today dog fights are held in Russia and Ukraine, with the goal of preserving the breed’s working qualities. There are very strict rules, and the fights are held in the presence of a judge, two assistants and a veterinarian. At any time, the referee can stop the fight. Dogs with dysplasia or heart problems are unable to fight, so this in itself becomes a kind of selection for health.

According to the FCI standard, the minimum height for female Central Asian Shepherd Dogs is 65 centimeters (25.5 inches) at the withers, while that of the males is 70 centimeters (27.5 inches). Unlike other breeds, there is no maximum height, but there are females who arrive at 75 centimeters (29.5 inches) and males at 85 centimeters (over 33 inches), but rarely taller than that.

Central Asian Shepherd Dogs have a strong and independent character. While territorial, they are very affectionate with all family members. The human represents for them the leader who must have a strong character to manage it; otherwise, the male dog in the pack will assert his leadership. A dog of this type is sometimes more easily managed a woman, as males always listen to women but not always men. Females, by contrast, can be managed even by those who don’t have experience. In the dog’s mind, women and children are those who must be protected at all costs. Puppies of this breed quickly grow very attached to their owner, seeking affection only from him, and avoiding strangers.

In terms of temperament differences between the sexes, males are stiffer but more straightforward in character. Females are softer, but more cunning. If you tell a male that he cannot climb on the bed, he will lie next to the bed. The female will stand next to the bed, and then put her head on it. Then, she’ll put one paw on it. Then, another. Eventually, she will be on the bed. 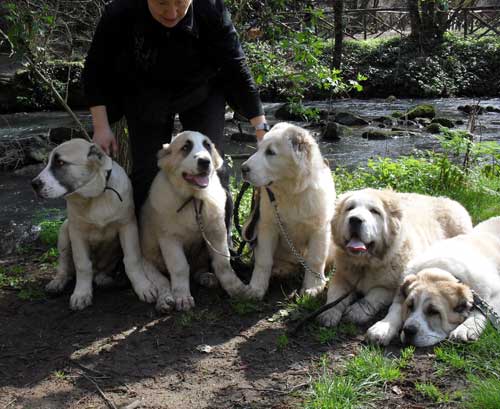 Central Asian Shepherd Dogs are relatively easy keepers, and the vast majority of puppies are not very destructive if they live inside the house. They do not eat shoes, nor ruin furniture. These dogs can live in a villa or apartment; in the case of the latter, they try to occupy the spaces where they give less trouble. Their character is quiet, self-confident, brave, calm and obedient. Dogs do not run back and forth if there is no reason to do so. Some dogs while guarding will attack without barking.

In the former Soviet Union countries, the Central Asian Shepherd Dog  is very greatly valued for these characteristics, and its popularity has grown beyond those borders.

In 2015, in our kennel acquired Caucasian Shepherd dogs. Many kennels breed both breeds, as they have a common purpose. But Caucasian Sheepdogs are more rigid by nature, and not for everyone. 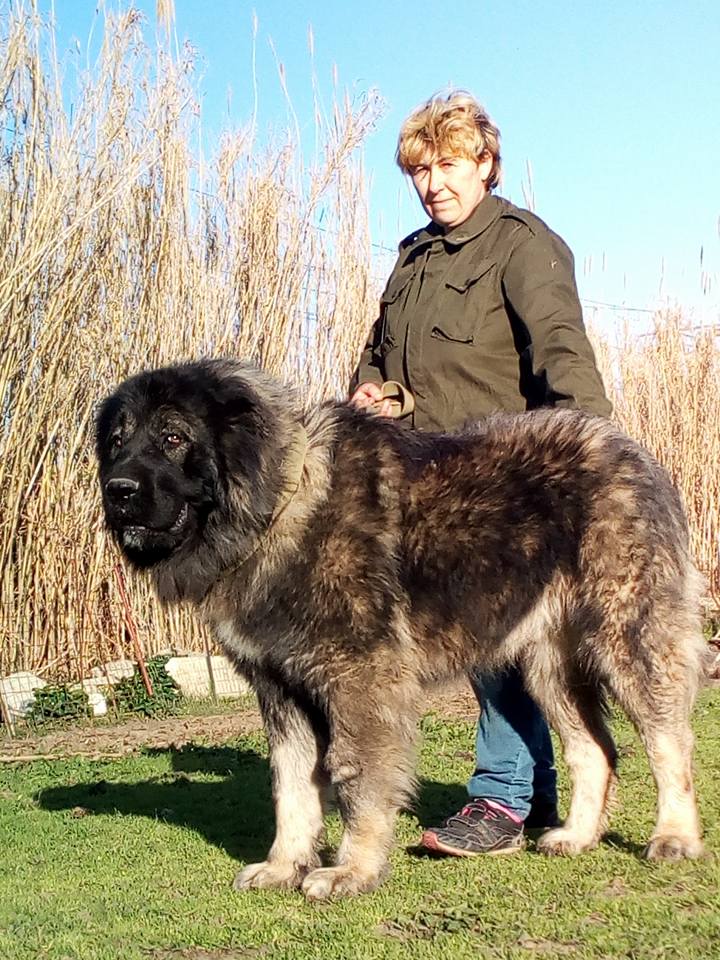 Irina Kyyanitsya is a veterinarian and owner of the Russkiy Gladiator kennel outside of Rome.

© Modern Molosser Magazine. This article may not be reposted, reprinted, rewritten, excerpted or otherwise duplicated in any medium without the express written permission of the publisher.
Mon, 07/02/2018 - 5:38pm