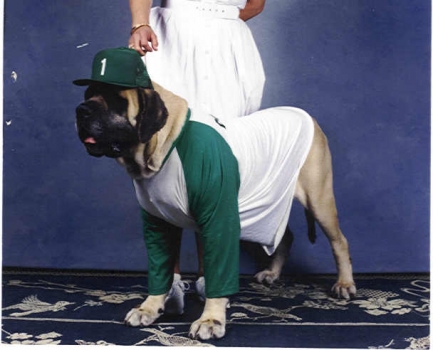 Meet Ch. Mtn Oaks Gunner, the Mastiff star of this 1993 cult classic
By
Andie Williams
Shortly after I purchased my first Mastiff bitch from Gulph Mills Kennel in 1986, I knew I wanted my world full of Mastiffs. I had plenty of room since I own a ranch, and they are such an incredible breed!
Though I had no intentions of showing, I wanted a quality bitch with a quality pedigree in case I decided to breed. Heidi’s first litter consisted of six puppies, and I kept four. 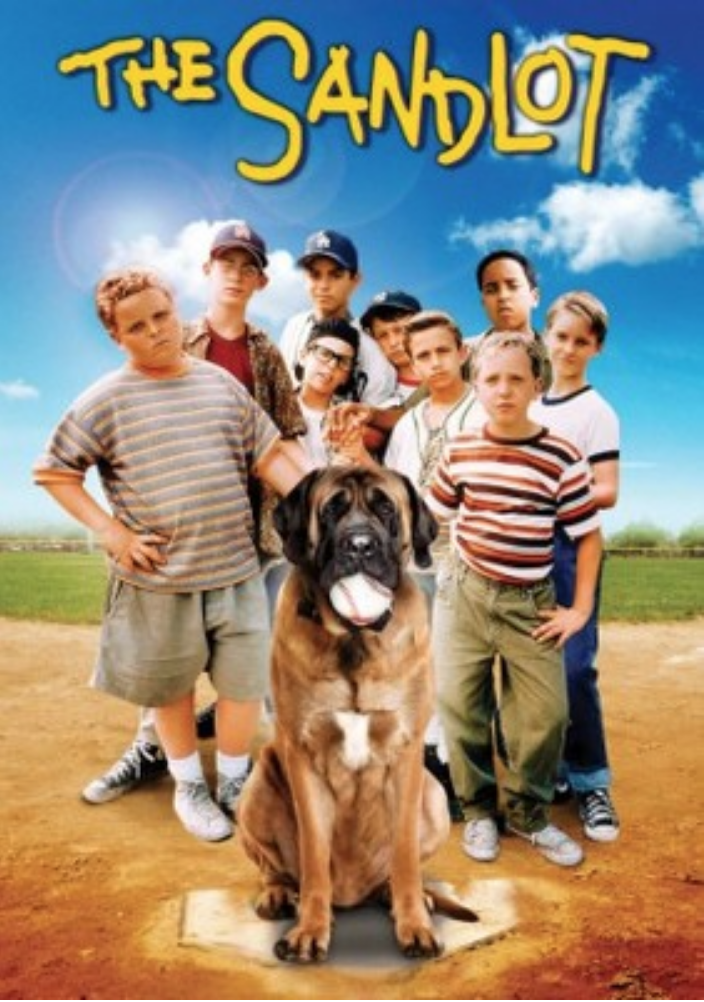 Gunner in his starring role.

Neither Heidi nor myself had been in the show ring until after that litter was born. I was invited to a “fun match.” Of course I took Heidi and the four puppies I kept. It was anything but fun for any of my Mastiffs! It was more like “What am I doing here with strangers touching me all over?” and “Take a puppy for a drag.” From that day forward, I was hooked on showing Mastiffs! I figured it couldn’t get worse.
Gunner was in my first Mastiff litter. I was so novice about raising a Mastiff litter back then. Gunner was the tiniest runt at 8 ounces, while the rest of the litter weighed over a pound each. Heidi laid on Gunner, and I had to give him “mouth to mouth” to revive him. I was almost sure he would be mentally handicapped! Though he was so tiny, he figured out how to get past his littermates to the milk supply.
As Gunner developed, his solo antics seemed to be his entertainment. He didn’t need to play with the other pups to have fun! He had such a sense of humor, and it was quite obvious when he was pleased with himself. He loved to do anything that would make noise. One of his favorite things to do was to go behind the vertical plastic blinds and wag his tail to make them rattle.
I am sure in his mind he thought the show ring was just another place to be silly. He developed the habit of sitting up like a panda bear when the judge wanted to look at his bite. He didn’t care if they looked at his bite, but he wanted to be in that position! He embarrassed me more times than I can say. In those days I wore wrap-around skirts, and he thought it was great fun to grab my ties as we went around the ring so I’d have his lead in one hand and hold my skirt on with the other.
Gunner attained his AKC Championship title at 14 months of age. He was one of the youngest males in the BOB competition at the 1990 MCOA Specialty and made it to the last cut. 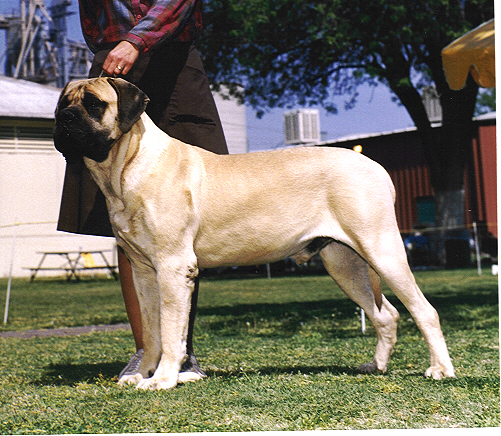 Gunner pictured finishing his AKC championship.
I received a phone call from Sheryl Harris, who was a trainer for Birds and Animals Unlimited, owned by Gary Gero. She wanted to audition Gunner for an upcoming movie. Someone had told her he would be great because he was such a funny, outgoing guy. She was arranging a trip across the country to audition numerous Mastiffs and asked if I could pick her up at the airport so she could meet Gunner. We went to a nearby park, where she played with him for a couple of hours. Sheryl said she would give me a call if she decided to use him. The rest is history!
No, I didn’t just turn Gunner over to Sheryl. I had exotics for 12 years, so I had my own movie contacts and did some checking “them” out on my own first. My favorite exotic-animal movie client told me he wished he could get Sheryl to work for him ... she was that good with the animals and her training techniques were awesome.
We agreed on a contract, as I was adamant that Gunner was not for sale. Since Gunner wasn’t a young dog when he started his movie career, I insisted that he have a “stand in” for the athletic scenes. When they started filming in Salt Lake City, there were three Mastiffs. One just didn’t work out and was sent home. The other one did some scenes, like jumping off the table after Gunner was filmed running down it. Gunner wasn’t scheduled for the “fallen fence” scene. The “stand in” Mastiff bit his trainer doing that scene so Gunner had to learn that role overnight!
Sheryl was in constant contact with me, telling me how Gunner and the filming was going. She loved working with Gunner and teaching him because he was having so much fun learning. His favorite learned trick was breaking the sugar-glass window for the movie. It made noise and he learned that in a very short time!
One early morning Sheryl called me from the set laughing so hard she could hardly talk. She and Gunner were walking to the set when he spotted a motor home just like mine. She said every bit of the obedience she had taught him went out the window. He took her to that motor home’s door, no matter what command she used! 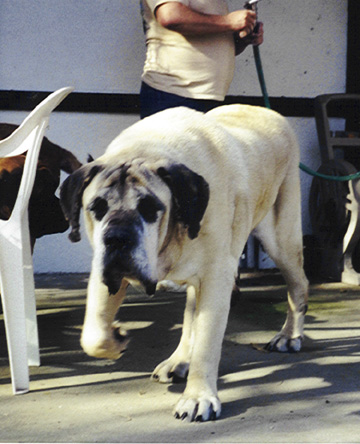 Gunner in his twilight years.
Gary and Sheryl were great to do business with, and we became friends. Gunner did numerous other movie and TV roles after the movie was finished. Any time I needed Gunner for a breeding or a show he was delivered to me. While Gunner was with Sheryl he was her house dog. We stayed at each other’s homes many times during Gunner’s transportation trips.
Would I do it again? Without a doubt, if I could have Sheryl for the trainer!
In 1993, Gunner was “showcased” at the MCOA National Specialty in Dallas, Texas. He was the first Mastiff to ever make a full-length feature movie. He was given the “never heard of” armband Number 1 and a three-foot rosette! As I took him around the ring, he got a standing ovation, and needless to say I came out of the ring in tears! Of course, Gunner knew it was all about him, loved the noise, was still doing his dog show ring antics and having fun!
Gunner lived to be almost 13 years old. I had just had his geriatric health testing done three weeks prior. Before I went to town to run errands, I gave him a “cookie” and he took it to his bed to eat. When I returned he had died in his sleep. He had a peaceful look about him, though. He had done a lot for the Mastiff breed image, lived his life touching many people with his sense of humor and personality.
His wonderful legacy lives on each time “The Sandlot” is shown on TV!
© Modern Molosser Magazine. This article may not be reposted, reprinted, rewritten, excerpted or otherwise duplicated in any medium without the express written permission of the publisher.
Thu, 06/07/2018 - 1:58pm