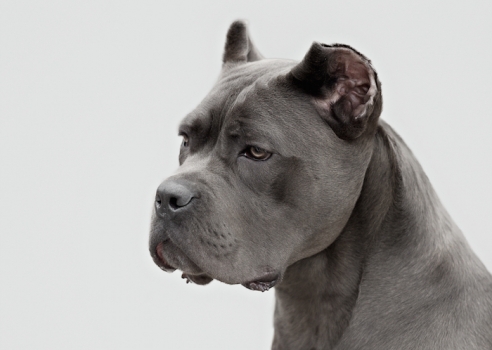 The geometry of the Cane Corso head

If you’re really into Cane Corsos — really, really into them — you know the head is a really, really big deal. So many fundamental aspects of breed type exist in the head, and if any of them fall short, breed-specific expression and appearance can be lost — or at least badly misplaced!

For months now, Cane Corso fancier Nicola Mille has been telling us about a video he’s been working on that explains the various proportions and relationships that define the Corso head. Confusion about correct head type has been exacerbated in recent months with the new FCI standard, which went into effect on January 1, 2016, creating what Mille calls a lot of “unnecessary noise” surrounding the standard change. But, he reminds, “you have only to read the original standard of [early Cane Corso expert] Prof. Morsiani to realize that the updates were precise and identical to his comments on the original standard. Cane Corso enthusiasts who were confused about the standard on December 31, 2015, are not going to be any more enlightened by the new version.”

In general, he adds, many dog fanciers and even breeders and judges lack understanding of basic concepts of anatomy and structure.

And that’s the reason for the video, which translates the standard’s words into three-dimensional images. “Drawings, after all, are the first thing you do in school,” Mille says. “The goal is not to stop at an ‘elementary school’ education in the breed, but to progress toward higher education.” The video contains comments added to the original standard by Prof. Morsiani, as well as captions that compare the new standard with its predecessor.

Click on the video below to begin. Fair warning, though: This is likely more information than most can absorb in one sitting, replete as it is with detailed canine physiology as well as more geometry, trigonometry and algebra than you likely did in your sophomore year of high school. So oil up your protractor, and let’s get started!

© Modern Molosser Magazine. This content may not be reposted, redistributed or otherwise duplicated in any medium without the express written permission of the publisher.
Wed, 06/01/2016 - 11:14pm