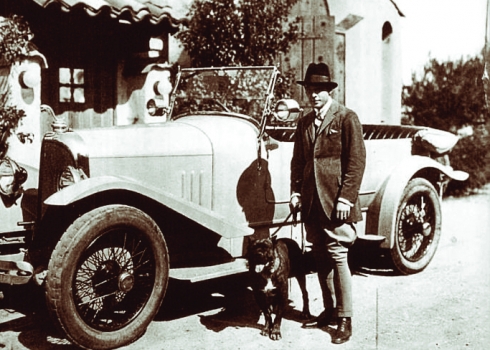 The Sheik and His Mastiffs

Did movie star Rudolph Valentino own the first Cane Corsos in the U.S.?
By
Denise Flaim As immediate as a horn honk or a doorbell buzz, the name Rudolph Valentino evokes every Hollywood-induced stereotype of the sizzling leading man.

But the famous star of “The Sheik” and other silent films wasn’t just a ladies man – he was a dog man, too.

Indeed, accounts and photographs of Valentino over his career document his deep love of dogs. Perhaps the most famous – and his favorite – was his devoted Doberman Pinscher, “Kabar,” whose specter is said to lick the hands of visitors to his grave at the Los Angeles Pet Cemetery. Valentino also owned a well-bred Irish Wolfhound, Centaur Pendragon, for which he paid $5,000; a few “police dogs,” German Shepherds with names like Marquis and Sheik; several Great Danes; “Mirtza,” referred to as a Spanish Greyhound, and so possibly a Galgo Español; an Irish Setter; and a smattering of Pekingese, relics of his failed marriage to second wife Natacha Rambova.

Except for the Galgo, all those breeds were relatively well known in the United States, and all had been recognized by the American Kennel Club by the first decade of the 1900s. But Valentino’s menagerie also included what a newspaper report vaguely called “two Italian mastiffs of rare breed,” whose names were the decidedly un-Continental sounding “Sheila” and “Shaitan.” Photographs from a photo shoot in 1925 show two handsome-headed and imposing dogs, with cropped ears, their dark coats possibly black with brindle markings. In the photo above, Valentino is flanked by the dogs at the threshold of the mansion at Falcon Lair, his hillside estate in Benedict Canyon overlooking Beverly Hills, with such marquee-worthy neighbors as Charlie Chaplin and Gloria Swanson. In another shot in front of the house, Valentino adds a prop – his beloved Avions Voison, a luxury car imported from Paris and bearing his signature cobra as a hood ornament (below). 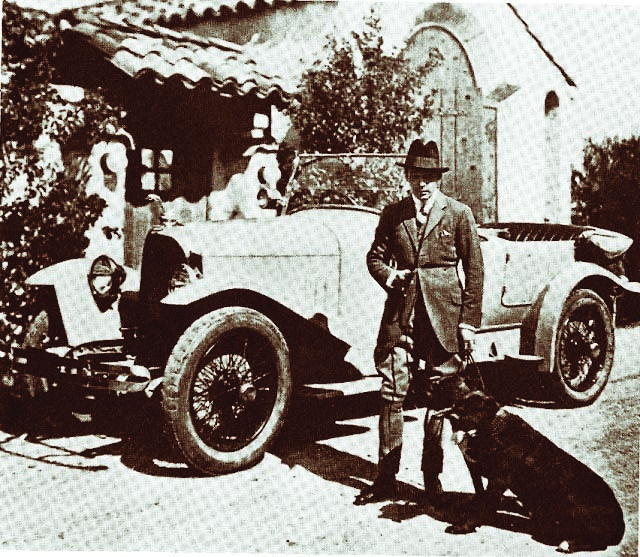 Valentino had a decided penchant for keeping large dogs. Some of this was practical: Admirers dropping in at Falcon Lair were a constant annoyance, and though Valentino had kennels for his many dogs, the two Italian Mastiffs – along with the Danes, Greyhound and Irish Setter – aided the servants “in keeping out overzealous fans,” according to the Los Angeles Times.

But owning – and being photographed with – tough, intimidating-looking dogs also helped combat the image problem that Valentino developed later in his career. Though women famously swooned at the brooding, seductive “Great Lover” – who was a dramatic departure from the very Anglo-looking, Douglas Fairbanks prototype of a Hollywood leading man – many men were threatened by Valentino’s exotic, dark good looks. The backlash manifested in media coverage that mocked Valentino as effeminate and dandyish, from his well-tailored suits with brightly colored shirts to his fondness for wearing jewelry to his slicked-back hair, copied by those who were dubbed “Vaselinos.” Valentino was an ardent fan of big dogs. Along with his two Italian Mastiffs, he kept several Great Danes and an Irish Wolfhound.

For Valentino, the two Italian dogs may have been just as much about nostalgia as masculinity. Before emigrating to the States in 1913 at 18 years old, Rodolfo Alfonso Raffaello Pierre Filibert Guglielmi di Valentina D’Antonguolla would have had ample time to become familiar with mastini; having a father who was a veterinarian (he died when Valentino was 11) also ensured that young Rodolfo was exposed to many animals. In addition to countering the growing public perception that he was a “pink powder puff,” Valentino perhaps found that his Italian-bred dogs helped assuage that ubiquitous malady of immigrants the world over: homesickness. Rudolph Valentino with “boy author” Horace Wade and Spanish Greyhound, possibly a Galgo Español, in 1925. If clothes make the man, so do the dog: The Sighthound’s elegant and lithe physique underscores Valentino’s stylish – his critics would say foppish – appearance. It is a stark contrast to his Italian Mastiff photos, to say the least.

The motivation for their acquisition aside, the most tantalizing question about Valentino’s “Italian Mastiffs” is: Exactly which Italian Mastiff were they?

Valentino was born in Castellaneta in Puglia, the region in Italy that is considered the cradle of the Cane Corso. To a knowledgeable eye, the two dogs could easily be identified as Corsos, despite the fact that it would be another half-century before the breed began to arrive in the United States in significant numbers, after Italian fanciers began a vigorous program of “restoration” of the nearly extinct breed in the 1970s. Reports of Valentino being accompanied by the dogs when he went on “solitary gallops” on horseback through nearby Griffith Park – at 4,300 acres, one of the largest urban parks in North America – also suggests a degree of athleticism and endurance trotting that would be typical of a Cane Corso.

That said, some Molosser experts would argue that the divergence of the Cane Corso and the Neapolitan Mastiff is a relatively recent development, and that early in the 20th Century, the two were so closely related as to be indistinguishable. Valentino in the 1922 film “The Young Rajah.” He rode at home accompanied by his Corsos, too.

A Los Angeles Times reporter visiting Valentino in 1924 at his first home in Whitley Heights – razed long ago to make room for the freeway – noted the “assortment of dogs, large and small, for Valentino goes in for the large canines, while Mrs. Valentino likes the small variety,” in particular Pekingese. “The star’s constant companion is a big Italian mastiff which he brought with him from Italy,” the reporter wrote. “The dog wears a hair collar which gives him the appearance of having a natural fringe around his neck.”

Though it is vague, the term “hair collar” sounds very much like the badger-lined collars worn by Neapolitan Mastiffs.

Whether they are definitively Corsos or not, what can be said about Valentino’s two Italian Mastiffs is that he valued them immeasurably. But when Valentino died unexpectedly at age 31 from peritonitis after emergency surgery, his $1 million estate went on the block – and along with it his dogs and horses. Four months after Valentino’s untimely death at age 31, his home and belongings – including his beloved dogs – were auctioned off.
“Among the many hearts that will feel the loss of Rudolph Valentino, perhaps none are more sincere than those of the many pets that are at Valentino’s residence in Beverly Hills,” wrote a Chicago Tribune reporter about her visit to the empty and desolate estate. In the kennel, “‘Drusus,’ the German police dog, paces up and down his inclosure, sensing something wrong,” and the Italian mastiffs, Sheila and Shaitan, “eye a visitor distrustfully.”
The auction was held in the courtyard of Falcon Lair on December 10, 1926. A diamond seller from New York bought the mansion and property with a $145,000 bid sent via telegram. The Avions Voison went for $2,200. And, reported the LA Times, “Valentino’s two favorite mastiffs were knocked down for $58.”
It was, to say the least, an unbefitting end for both master and mastini.
© Modern Molosser Magazine. This article may not be reposted, reprinted, rewritten, excerpted or otherwise duplicated in any medium without the express written permission of the publisher.
Thu, 09/10/2015 - 10:39pm