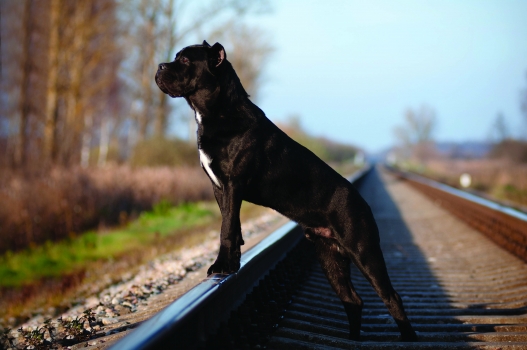 Is Cane Corso type heading off the rails in the United States?
By
Denise Flaim

Barely three years after its formal acceptance into the American Kennel Club, the Cane Corso is in crisis.

According to some longtime American breeders – who themselves are an increasingly rare breed in the Cane Corso world – a variety of factors is threatening to upend all the hard work done during the many years that the breed was nurtured, slowly and capably, outside the AKC spotlight.  From a steady influx of newbie breeders who are not inclined to accept mentorship, to a flood of weedy imports purchased under the misguided assumption that if it’s Italian, it must be better, the breed is in grave danger of losing its way, they warn.

“It’s a perfect storm that is leading us down the road to some serious problems, not just of size but also structure and even type,” says breeder-judge Shauna DeMoss of CastleGuard Cane Corsos in Cedaredge, Colorado, chair of breeder education for the Cane Corso Association of America. “We have serious, serious growing pains right now.” Ch. CastleGuard’s Roman, a combination of both rustic American and Italian lines. Born in 2001, he weighs 150 pounds and is still going strong today.

Michael Ertaskiran of Godiva Cane Corsos in Bronxville, New York, the former parent-club president who guided it through the long process toward AKC recognition, says that today the Cane Corso is “almost unrecognizable” from the breed he fell in love with only 20 years ago.

“Most examples are slight boned, thin, with small, itty-bity heads,” he says. “The Cane Corso should have a sturdy skeleton, heavy bone, substantial musculature. He should be powerful and agile at the same time, and your eye should be drawn to the head immediately, due to its disproportionate size. Unfortunately, that is now mostly a thing of the past.” The Cane Corso’s arrival on the world dog stage was, from the beginning, fraught with problems. First and foremost was how to differentiate the breed from its Italian cousin, the Neapolitan Mastiff, particularly when one could convincingly argue that the two breeds were never historically distinct until modern times, and that they essentially represent the opposite ends of the same continuum. This set the stage for the thinking that the Cane Corso should be everything the Neapolitan Mastiff is not – and allowing for a mistaken weakening of insistence on correct bone and substance.

Also, because the Cane Corso’s “reconstruction” period – in which it was crossed with other breeds in order to create a viable breeding pool – was relatively recent, the breed is not genotypically consistent, to say the least. The use of Neapolitan Mastiff and Rottweiler blood in the United States, and Boxer and Bullmastiff blood in Europe, left noticeable “drags” in each breed population.

The introduction of the Boxer into the Italian Cane Corso breeding pool produced very tractable temperaments and the desirable square jaw – but at a very steep price, says Derek Matson of Alcor Cane Corsos in Dayton, Ohio.

“The Cane Corso is a rectangular dog with heavy bone that moves at an elongated trot, with a head that is proportionately large for its body and a coat that is three-quarters of an inch to an inch long,” he explains. “A Corso should look like it can run through a wall – not jump over it.” Curt Gebers of Red Rock Canyon Cane Corsos in Las Vegas, Nevada, notes this “unfortunate” squaring up of the Corso has led to more movement faults in a breed that was ironically noted for its soundness in its rare-breed days. “The dog has to be a rectangle, otherwise it doesn’t work mechanically,” he says. And despite the fact that AKC judges are known for being meticulous on structure and movement, “I see a lot of dogs winning that are crabbing, overreaching and easty-westy.”

The Boxer emphasis is turning Cane Corso type on its head, Matson says: Corsos are becoming squarer and lighter boned, with smaller heads, smooth, slick coats, and choppy movement. “And because judges are picking that, more and more people are bringing out Boxer-proportioned dogs. Dogs that are being put up are lacking fundamental attributes of our dogs. They’re changing my breed.”

In an attempt to regain dwindling substance, certain Italian lines seem to now have a Bullmastiff influence, DeMoss notes, only to add new problems to the mix.

“Everything about a Corso is about right angles, and Bullmastiffs are rounded,” she says. “Because of this heavy Bullmastiff influence, our square heads and muzzles are getting domed stops and rounded lower jaws. Not to mention the rounding of the shoulder and rear ends.” And, of course, the Bullmastiff’s decidedly square silhouette is another gravitational pull away from the longer-cast, rectangular Corso body that the AKC standard asks for. Astra, a very large female from an old Italian line, 2002.

Particularly alarming to these seasoned breeders is the tendency toward what DeMoss disparagingly calls “pocket Corsos.” “Some of the bitches being picked by judges today are 60 and 70 pounds,” Matson agrees.

And judges should not confuse height with substance, he adds: In the breed’s heyday, a “big” Corso might be 27 inches at the withers, but would weigh 150 pounds. Today, though some male exhibits are even taller, they are nowhere near that weight – leggy, without the required substance and bone.

Proponents of smaller Corsos note that the FCI standard lists 110 pounds as the upper limit for males. But as with many breeds, that guideline is not adhered to, even in the motherland. “When Italian breeder-judges come over, do you know what they pick?” Matson asks rhetorically. “Big dogs with lots of bone and heavy muscle.”

Certainly, a breed’s land of origin holds a special place in the hearts and minds of its fanciers all over the world. But this fascination with Italian-bred Corsos –without taking the time to visit and learn from those overseas breeders – is often a perilous shortcut. Scandifio’s Sasha, a substantial bitch of more than 100 pounds from old American lines, in 2000. Her sire, Ch. Bel Monte Nero (below), was a pivotal dog in American pedigrees in the 1990s and beyond. “By and large, breeders in the United States don’t form a relationship with someone in Europe. They just want a brand name – ‘If it’s Versace, it has to be good,’” says Ron Hoser of FireHorse Cane Corsos in Chester County, Pennsylvania. “It’s all about immediate satisfaction, not taking time to form relationships and learn.”

This lack of mentoring comes home to roost in the whelping box, he adds.

“It’s really hard to breed Corsos based on phenotype. Just because you see two dogs you like doesn’t mean they’re going to carry those traits in reproduction, and it sure doesn’t mean if you put them together you are going to get the best of both of them.” Jones, a hugely influential male from the Czech Republic, is representative of the typey and correct Corsos that created something of a golden era in the breed in the late 1990s. Hoser recognizes the conundrum for judges at this juncture in the breed’s AKC history. “Many of the Corsos currently being exhibited lack the size, substance and strong head type that are the essence of the breed,” he says. “As a result, many of the AKC judges are seeing poor examples in the ring at a time when they themselves are trying to gain an understanding of proper type.”

When a correct Corso does walk into the ring in such company, he is likely so different that anyone but the most sure-footed judge is hard pressed to ribbon him.   For her part, DeMoss implores judges to read the educational information circulated by the parent club, and in particular asks all-rounders to look beyond the temptingly familiar outlines of Boxer-influenced Corsos. She encourages judges to seek out experienced breeders for a deeper understanding of true Corso type, rather than relying on the flock of professional handlers who have alighted on the breed in recent years. And she adds that they should not be afraid to withhold ribbons if an exhibit is lacking – which, at this point in the breed’s history, it might very well be.

Above all, judges should keep in their mind’s eye the picture of the dog that the standard asks for: a muscular, balanced, large-boned, big-moving, rectangular dog with the correct head that is every inch a Molosser, albeit an elegant and agile one.

The future of the breed might very well hang on it. Ch. Rivali’s Lucci de Italica Terrae, an Italian import bitch whelped in 2003 and weighing 105 pounds, is a contrast to current trends in U.S. show rings, where some bitches average around 70 pounds. © Modern Molosser Magazine. This article may not be, reposted, reprinted, rewritten or otherwise duplicated without the express written permission of the publisher.
Wed, 09/09/2015 - 3:09am