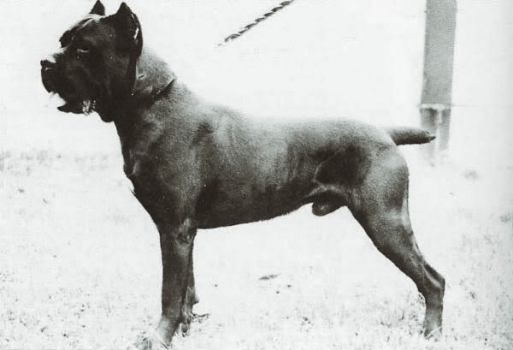 The Bible has Adam and Eve, and Cane Corso fanciers have Basir and Babak.

Whelped in 1980, Basir (and to a lesser degree his brindle sister Babak) are fetishized in the breed because they were used as the visual models for the Cane Corso standard, and were for all intents and purposes the first modern Corsos.

Basir arrived on the scene as the Cane Corso was being promoted by serious Italian fanciers, who in the early 1970s began the “recovery process” for this dwindling breed from the Puglia region of Italy. An impressive black dog, he represented the transition between the preservationist-minded breeding efforts of a small clutch of Corso lovers, and the breed’s official recognition in the mid-1990s. Above left: Basir’s sister Babak – not quite his counterpart in type, but an early template for the female version of the breed. Above right: Basir's brother Bulan was also used in breeding, and arguably had more of an impact in the whelping nox than his more famous brother did.

Basir’s litter, bred by Giancarlo Malavasi, was a linebreeding: The sire, Dauno (Aliot di Ortonova x Mirak), was a typey black dog with a powerful but athletic build, slightly undershot bite, and desirably large and well-proportioned head. Dauno’s sister, Brina, was bred to a dog named Picciut (sometimes referred to as Pisciotto, which roughly translated means “kid”), producing Tipsi. Bred back to her uncle Dauno, Tipsi produced Basir and his influential siblings, including the handsome male Bulan. Basir was eventually acquired by Fernando Casolino, who remembered the Corso from his childhood and was very active in the breed’s recovery, becoming one of the founders of the Società Amatori Cane Corso, or SACC, the Italian breed club.

From all angles, Basir was worthy of the praise and high hopes heaped on him. A black dog like his father, he measured 64 centimeters, or about 25 inches, at the withers and weighed 44 kilograms, or 97 pounds. With this moderate size he had good substance, very sound conformation and the convergent planes and shorter muzzle that are so important for correct Corso head type. Simply put, he was a well-built dog that looked like a Corso. This side profile of Basir was turned into an illustration for the Cane Corso standard. It has also been used to demonstrate the ideal proportions for many aspects of Cane Corso conformation. But as much a cause for celebration as the Basir litter was, it was also a source of frustration, as subsequent generations could not replicate its high quality, even with linebreeding, which was relied on heavily to set type. Baal, whelped in 1983, demonstrates the difficulty in maintaining the quality of the Basir litter. Baal’s mother was Basir’s sister, Babak; his sire was their brother, Aliot. In other words, a full brother/sister breeding.

A hard look at the dogs behind this much-hyped litter could have foreshadowed this difficulty. If photographs are to be believed, neither of the paternal grandparents, Aliot di Ortonova and Mirak, were as typey as their son, Dauno. But they were the combination that Basir and his siblings were linebred on. And so the seeds for the bane of the Cane Corso breeder – variability in size, substance and head style – were neatly planted with Basir and his compatriots.

It is interesting to ponder, especially today, when the Cane Corso is undergoing such a phenotypic crisis, what would have happened if the overall Corso gene pool been permitted to grow slowly and steadily, with generations of purposeful, unhurried line-breeding to solidify type. With that in place, would today’s breeders still have such difficulty with consistently producing dogs of high quality and excellent type?

Instead, the increasingly popular breed has experienced a succession of morning-after-Basir moments, crossing over to breeds such as Boxer and Bullmastiff in an effort to produce numbers and rebuild, and then having to contend with those disappointing throwbacks in the whelping box. Like the Basir generation, even the typiest Corsos might not throw themselves, or anywhere near themselves – instead simply reissuing the garbled pedigree behind them. Talk to any knowledgeable Cane Corso breeder today, and you will hear the familiar refrain about trying to regain and redirect type, as if the breed’s gene pool has become the canine version of Christine, possessed and driven by unseen hands into precincts where they would not willfully tread.

With all this gloom and doom, what is the good news to take away from the Basir story? All you need do is look at him. His sound structure and beautiful head type – including correct planes and muzzle than many of his progenitors did not offer – should be a beacon for today’s fancier.  Basir was – and is – proof that the modern Cane Corso is attainable. Getting there, however, takes hard work. Basir and perhaps to an even greater extent his typey but lesser known brother, Bulan, were important foundation dogs for pioneer breeder Malavasi. Basir and Bulan’s bloodline continues today in Italy’s Dell’Antico Cerberus kennel, which has produced its share of champions and World Winners. But as in any breed, wheedling consistent type out of exemplary but early dogs took many generations of experimentation, commitment and rigorous selection – a roadmap some of today’s breeders would do well to study.
© Modern Molosser Magazine. This article may not be reposted, reprinted, rewritten, excerpted or otherwise duplicated in any medium without the express written permission of the publisher.
Fri, 09/04/2015 - 2:18am