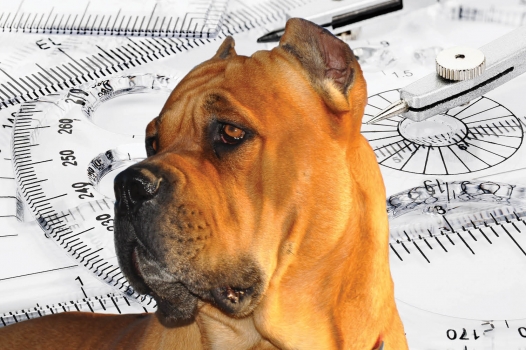 The original ENCI diagram of the Cane Corso was based on Basir (above), an early dog who was also the model for the written standard. As with all the sketches shown here, the added plumb lines, angles and measurements have been removed. In early March, the illustration at left was released by the Italian Kennel Club, or ENCI. The reaction from some fanciers was swift. On Facebook, Shauna DeMoss of Castlegard Cane Corsos, who is the education chair for the Cane Corso Association of America, called it “very disconcerting.” “It sure does appear to me that some artist is a Lab owner and doesn’t understand the correct Corso,” she wrote. The natural ear and tail reflect the new breeding reality in Italy.

Later this spring, ENCI released a revised illustration (above, shown both naturally as well as cropped/docked).

1.  The “new” dog is shorter on leg; his brisket and elbow are placed below the midpoint between the height at the withers and the ground.

2.  Another significant difference is the new dog has a shorter, or at least less defined neck. While the original dog appears taller, he is similar to the new dog in terms of his height at the withers, which is how all dogs’ height is measured. But the new dog’s shortened neck gives him a squatter appearance. (The new dog does, however, have more of a crest to his neck, which adds a bit more polish and elegance without sacrificing strength.)

The shorter neck might be due to the fact that on the revised dog, the head appears a bit smaller. The FCI standard says the neck should be as long as the head, so a smaller head means a shorter neck.

3.  The croup has changed: On the original dog, there is a slight slope to the croup before the tail is inserted. On the new dog, the croup is essentially flat, even though the FCI standard describes it as “slightly inclined” – a direct contradiction. A slightly sloped croup gives the dog more range in order to reach under himself and drive off his rear. Such mildly sloped croups are typically seen on dogs whose work involves a great deal of trotting and endurance work. The Cane Corso, as an all-around farm worker and athlete, would benefit from a slightly sloped croup.

4.  The original dog had bone that was a bit light for a dog of his size and mass. (For example, compare the feet on both dogs.) In the new drawing, his front and rear legs are heavier, arguably resulting in a dog of more balanced overall substance than the original sketch.

Now let’s see if the revised Cane Corso illustration is an improvement on the first draft:

1.  The lack of leg on the first dog has been addressed, with the newer version showing a dog that has more equivalent measurements between the withers and elbow, and the elbow to the ground. However, in the process of correcting this, the dog in the second version has acquired something of a herring gut. Compare the rib cages: In the later draft, the ribs cut up much more quickly, taking away from the all-important lung and heart room.

3.  The slight slope to the croup has thankfully been restored. Just as much as the lowered leg length, the flat croup contributed to the “Labrador Retriever” feel of the first revision.

4.  The bone remains unchanged. This enhancement to the overall substance of the dog is a welcome addition, particularly at a time when weedier, Boxer-like dogs are impacting Cane Corso type in a negative way.

5.  The dog in the second version lost some prosternum – arguably not a bad thing, since the first version looked more reminiscent of a Weimaraner!

What to make of this visual evolution of the correct Cane Corso? Critics of the initial revision should find the final draft to be a vast improvement: The Labrador Retriever echoes are by and large gone, the correct croup is back, the shortened legs are gone, and much-needed substance has been added.

Fanciers  should ask themselves whether a slightly larger head and longer neck would reverse the small degree of “stuffiness” that has crept into the illustration. And, while the standard asks for a chest that is “well developed in three dimensions” (height, width and depth), the ribcage ideally should not begin to cut up dramatically immediately after the elbow, an area where the dog in the original drawing excels.

Finally, the impact that a cropped ear makes on the overall bearing and general impression of the dog can’t be overstated. Below is the uncropped, undocked version of the new dog compared to the original – quite a dramatic difference, isn’t it? But at least the uncropped version is no longer looking like an extra from “Marley and Me.”

© Modern Molosser Magazine. This article may not be reposted, reprinted, rewritten, excerpted or otherwise duplicated in any medium without the express written permission of the publisher.
Wed, 09/09/2015 - 7:17pm