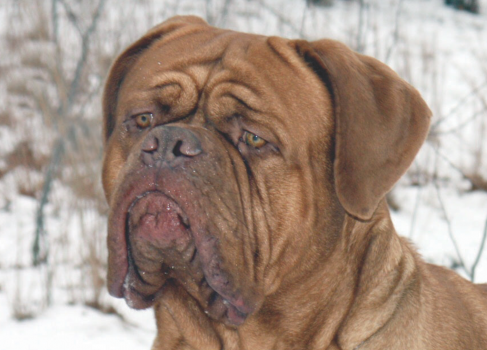 Bas Bosch is well known for placing a strong emphasis on the "chin mark" in the Dogue de Bordeaux: He thinks an upswept chin is essential for creating the Dogue's trademark "sour mug" expression. And he's even coined a little phrase about how important it is to him when he judges the breed:   "No chin, no chance."

When he was in the United States visiting last spring, I had a chance to talk to Bas about this and other Molosser musings. Below is a video of our conversation. Scroll down for a transcript of the complete conversation.

Can you talk about chins in Dogue de Bordeaux?

(Laughs) I don’t dare to talk about it anymore.

Because I came up with this phrase, used it at my seminars so often, that perhaps it’s haunting me now. But it is important.

Yeah, that’s perhaps the American version of it. No, it’s “No chin, no chance.” That sounds better. It doesn’t mean to say if you give me a chin, you’ll win. That’s a different story. But, yes, chin is important.

This chin, with a Dogue, it’s essential, and at the same time it’s the finishing touch of what literally is the French sour mug. You cannot be a sour mug if you do not have a chin. That’s for me the way it is. It’s not only chin, it’s also nose placement, it’s also this deep stop, it’s also this eye. As far as I’m concerned, a good Dogue de Bordeaux can have a standoffish eye that doesn’t need a chin to say, “Stay where you are.” But those are only the very best, the very few who have the eye that already says it all.

Is that the result of eye placement or color or shape or all of the above?

Exactly. All of them. But it should be a wide-placed eye, of course. It never should be round. It never should be bold. And of course the deep stop, with the extra quality of eyebrow, can again compared to the Bullmastiff and then this higher nose placement, this whole face is very much Dogue de Bordeaux.

What’s the criticism of you for saying, “No chin, no chance”?

Oh, because I could talk about it for quite some time. (Laughs). And so people might get the impression that’s the only important thing, but it’s not. The muzzle is really important. And a chin in a Dogue de Bordeaux muzzle is essential.   But I’ve also said that the standard has been changed, so in the past, when I came into the breed, we had more length of undershot, and now it has become a bit more mild, a bit more modest, in order not to go for hypertype, and also to use more dogs in breeding and so forth. That’s a good thing, but I do know that it becomes even more difficult to get the right amount of chin, which is still very much of the same description both before and after the standard change. If you do not have a bit more undershot, in other words, just giving a bit of space between upper and lower teeth, minimum space, it’s fine, but that muzzle, that kind of a bite never will give you the right amount of chin.

For quite a few years in the early years, I was always able to find real nice dogs with the expression I was looking for, so with the right amount of chin mark. But I remember vividly, it was in Finland, must be 15 years ago, easily, there wasn’t a dog there. And there was a bit of mediocre quality of Dogue de Bordeaux anyway, and there was one dog I really loved, but he had no chin whatsoever. That was my punishment that I had to go for him. It hurt, really, but what it taught me later on was that you should never be too strict with “This I will never accept” and “This I will never go for” and “I always need this,” because then you will make mistakes, you will lose the overall picture. And on that day, with this mediocre quality of Dogues, this dog had to win. Luckily I was able to explain afterward why I gave it to him, and I still could say, “Well, he needs more chin.”

© Modern Molosser Magazine. This article may not be reposted, reprinted, rewritten, excerpted or otherwise duplicated in any medium without the express written permission of the publisher.
Fri, 01/06/2017 - 10:10am