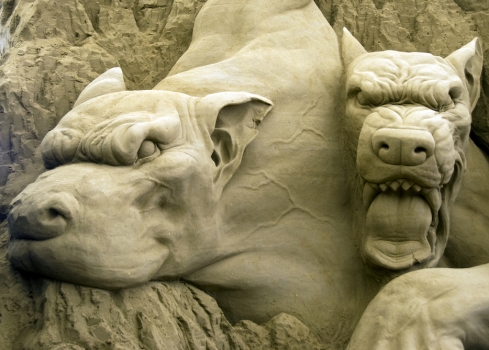 Cerberus sculpted in sand at the 2009 International Festival of Sand Sculptures, in Lido di Jesolo, Italy.

Was Cerberus of Greek mythology a Molosser?
By
Denise Flaim

You don't have to be an expert in Greek mythology to know who Cerberus was.

After all, the three-headed, serpent-tailed dog that was believed to guard the entrance to Hades – ancient Greece’s answer to the afterlife – pops up with regularity in popular culture. He’s been spotted in kiddie cartoons (appropriately, he terrorized Ponyville in “My Little Pony: Friendship Is Magic,” until someone thought to rub his belly), comic books (starting with the Thor series of the 1960s through to a cameo in “X-Factor”), video games (Final Fantasy 8, Mass Effect, Blood – the list goes on and on) and any retelling of the Hercules story (defeating Cerberus was that Greek hero’s twelfth and final labor). And, of course, there’s “Fluffy,” the drool-flinging triple-header of a canine who guarded the portal to the Sorceror’s Stone in the Harry Potter movie of the same name. 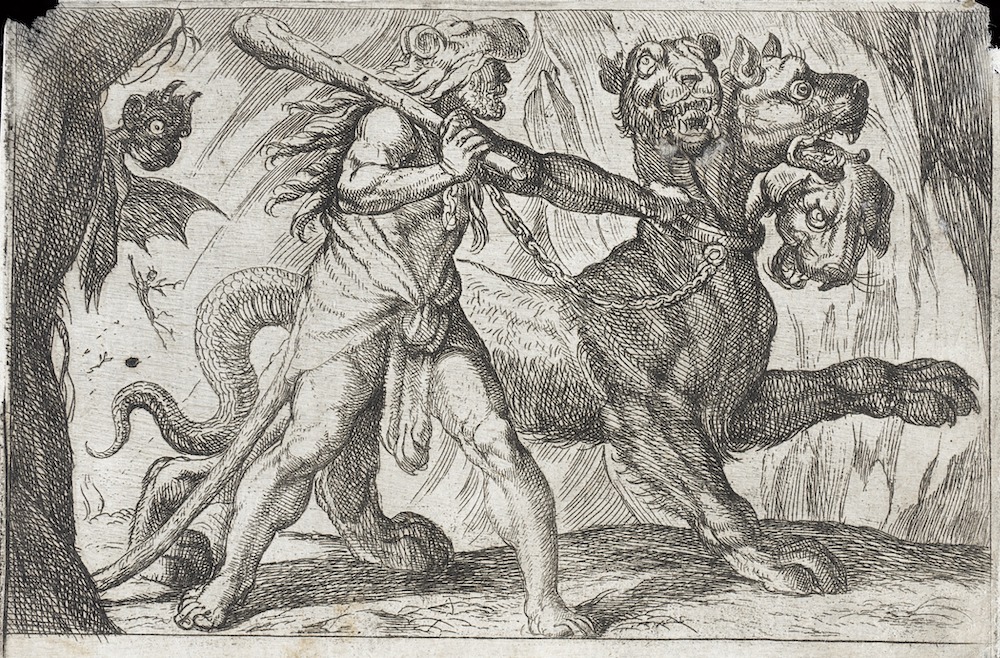 Arguably the world’s first and foremost hellhound, Cerberus reverberates in folk tales across cultures that speak of a brimstone-breathing dog of death, including Sherlock Holmes’ famous short story “The Hound of the Baskervilles.”

But what kind of dog was Cerberus, exactly?

Being that he was a mythical creature, and so photographs are in short supply, Cerberus has been depicted with various morphologies throughout the ages. With his serpent-centric pedigree – his father was Typhon, a fire-breathing, dragon-like giant from whose name we derive the word “typhoon,” and his mother was Echinda, a half-woman, half-serpent – he is frequently depicted as having a snake for a tail, or with snakes emerging from various parts of his body, including his head, muzzle, neck, back, pasterns and feet.

But Cerberus was often portrayed with lion-like characteristics as well. The Greek vase below, for example, shows a two-headed Cerberus (depending on the spirce, the number of his heads varied, from one to as many as 100) with a leonine head and a mane. 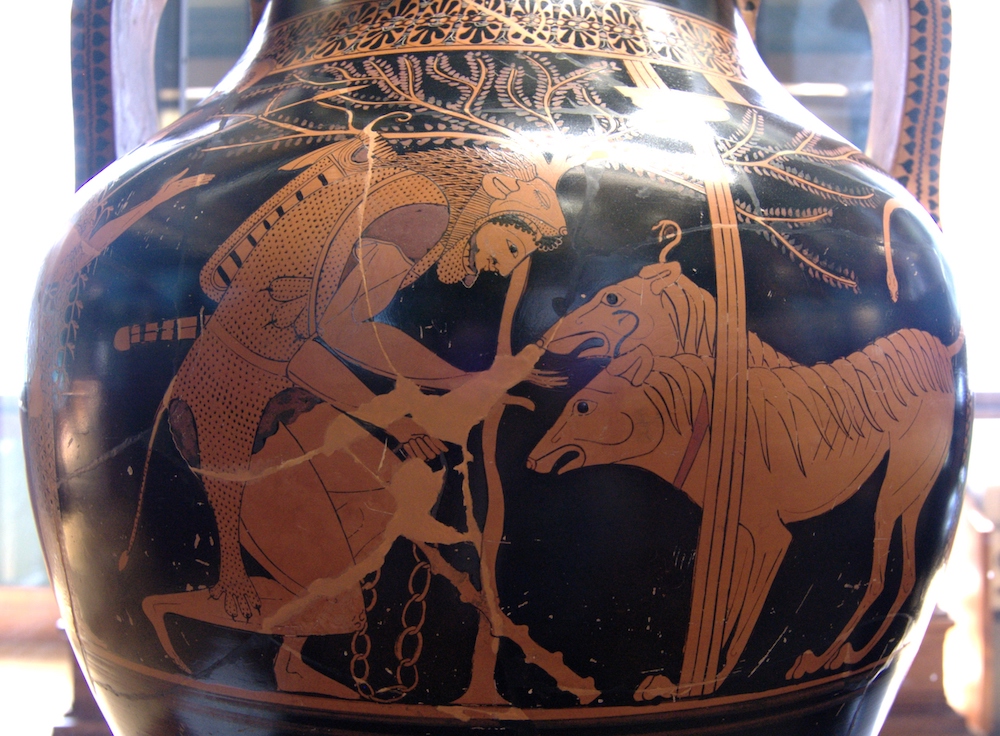 Hercules and Cerberus on a Greek amphora, or two-handled jar, dating from 530–520 BC.

The comparison to lions, of course, evokes the Molossers, especially the Neapolitan Mastiff. Cane Corso enthusiasts in particular have gravitated toward the Cerberus myth, with one high-profile kennel, dell’Antico Cerberus, incorporating the otherworldly dog into its very name.

More modern depictions of Cerberus – those of more recent centuries, that is – often depict him as a Molosser, with blocky muzzle, heavy head and cropped ears. In his poetry, the Greek essayist Plutarch went so far as to cast Cerberus as a Molossian hound, which is the origin of the modern, if arguably murky term “Molosser.” Indeed, many depictions of Cerberus evoke the image of the Molossian dog that has been immortalized in such ancient statuary as the so-called Jennings Dog. 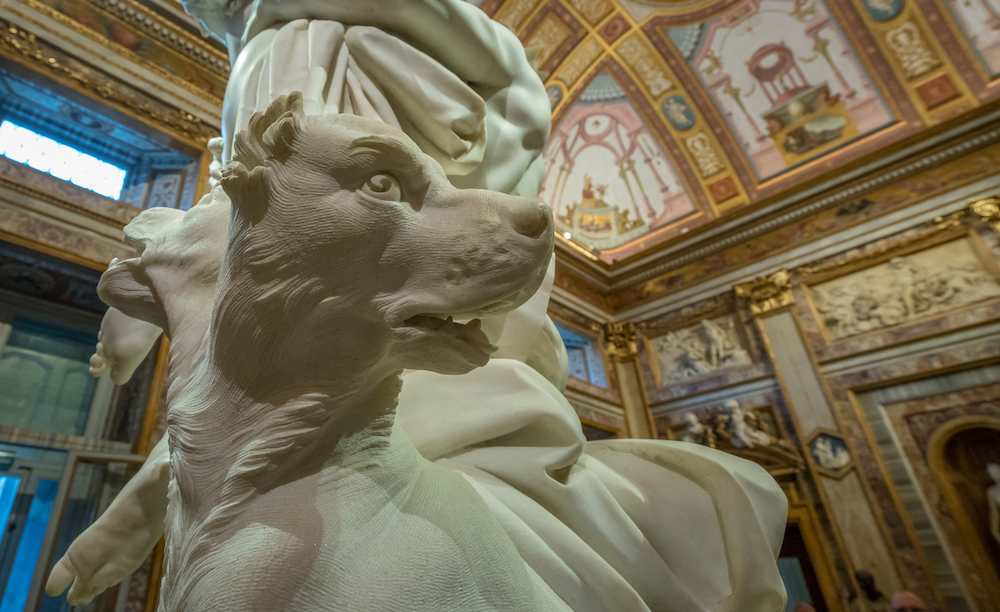 Detail of a Jennings-like Cerberus from a marble statue of Pluto, the Roman version of Hades, abducting his wife Peresephone by the sculptor Bernini. From the early 1620s, it can be found in Villa Borghese in Rome.

According to Greek legend, Cerberus subsisted on raw meat – no surprise there to the many Molosser owners who prefer to feed a biologically appropriate diet of uncooked meat and bones instead of kibble. His siblings included the many-headed Lernaean Hydra, which regrew two heads whenever one was decapitated; the Chimera, a female monster with the body of a goat, the head of a lion and the tail of a serpent. See a theme developing? 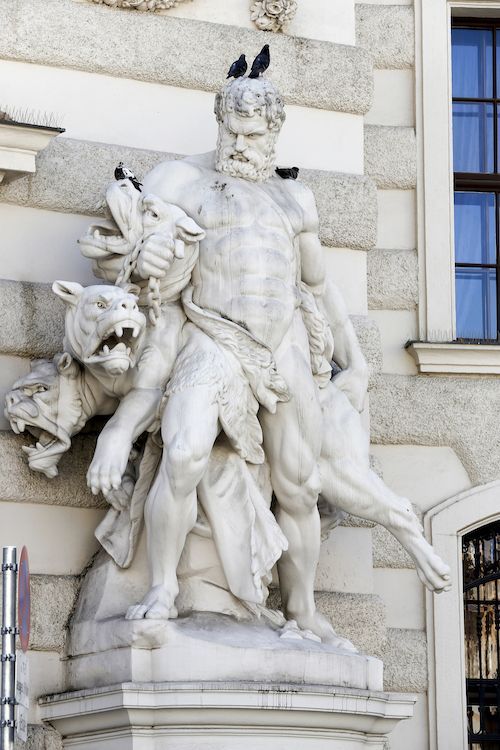 A pigeon-topped statue of Hercules subduing the ferocious Cerberus at the Hofburg imperial palace in Vienna, Austria.

Cerberus’ guarding role in the underworld role certainly sounds like one of our modern Molossers: He was unimpeachably loyal to his master Hades, who assigned him the job of securing the perimeter, ensuring that living persons did not cross the River Styx, and conversely keeping the dead from crossing back in the land of the living. But ancient writers described him as affectionate to those who belonged in his realm, noting that he “fawned over” newly arrived souls.

Folklore has it that when Hercules vanquished Cerberus by choking him into submission and brought him back to the real world, the monstrous dog’s saliva dripped on the ground and from the wet spots sprung wolfsbane, the highly poison plant traditionally said to repeal another creepy canine – the werewolf.

While Cerberus was by all accounts so fierce looking as to terrify anyone in his sights, he wasn’t exactly the sharpest knife in the box. Orpheus played music on his lyre to set the savage beast to snoring so he could seek out his dead lover in Hades; when Aeneas decided to tour the underworld, he had an intermediary toss Cerberus a spiked honey cake, which soon sent him slumbering.

© Modern Molosser Magazine. This article may not be reposted, reprinted, rewritten, excerpted or otherwise duplicated in any medium without the express written permission of the publisher.
Fri, 09/20/2019 - 3:41pm