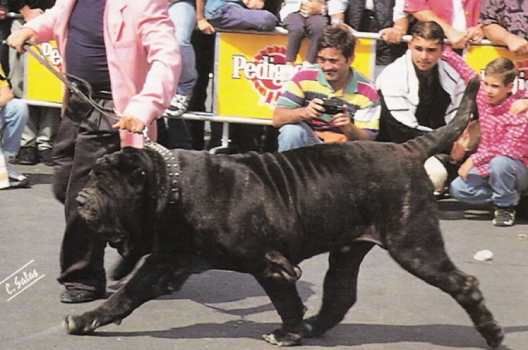 Ideally, the Mastino should trot. Pacing is tolerated ... But should it be?
By
Denise Flaim

Every dog breed is unique. But some are more unique than others.

Fitting squarely in this second category is the Neapolitan Mastiff. At first glance, there is his incredible wrinkling and his tremendous mass, both unmatched among canines. And when he moves, there is his unique gait, so fundamental that the standard calls it “a typical characteristic.”

“At the walking pace, he has a slow, loose-limbed walk, just like a bear, and the scapulae go up and down alternately,” explained Italian Mastino judge and breeder Antonio Di Lorenzo in an article on the breed. “When trotting, he becomes like a large cat with a powerful push from the rear legs.”

At dog shows, most breeds are assessed at the trot, a very utilitarian and energy-conserving gait designed for endurance, in which the dog covers the most amount of ground with the least amount of effort. But because of its sheer size and substance, the Neapolitan Mastiff can sometimes pace, a two-beat gait in which the legs on each side move back and forth together, the way a camel does. The pace is considered a relaxation gait, often utilized when a dog is spent or tired.

The Mastino Napoletano is not the only Molosser breed that paces: Indeed, the pace is the principle gait of the Fila Brasileiro, “causing a rolling or rocking motion of the thorax and hips,” according to the standard. And in the Herding Group, the Old English Sheepdog is permitted by its standard to “amble or pace at slower speeds.” But for the vast majority of breeds, the pace is a very undesirable gait. All the world's Neo standards mention that the breed will sometimes pace. The FCI standard notes that it is to be “tolerated,” while the American standard is much more forgiving, saying it is “not to be penalized,” and even listing it among the breed’s acceptable gaits (along with, somewhat inexplicably, the gallop). Nonetheless, many all-breed judges penalize pacing severely. And even among specialist judges there is some disagreement about just how permissible the pace is in Neapolitan Mastiffs.

“Some judges are excessively severe about movement of the Mastino, which in reality should be accepted, since from time immemorial it is the characteristic, effortless gait common to many heavy animals – for example, heavy horses amble,” noted Mastino expert and judge Guido Vandoni in a 1986 article. “In any case, the progress of the Napoletano should be smooth in its own typical way so that the level topline is not disturbed by erratic nor jerky movements of the limbs front or hind.”

Lions and Neos and Bears Oh My

The gait of the mastino has been compared to both the lion and the bear. In all these videos, the animals are pacing: that is, the legs on each side move in synch.

In an echo of a recurring theme on this loose-limbed breed, he too compared the Mastino at the walk to a bear, and at the trot to a lion, “even down to the movement of the shoulders and a little pigeon-toed.” When the dog does gallop – which is rare, Alessandra acknowledged – again, he should resemble one of the big cats. “All the large mammals pace when they travel large distances, especially the elephants when they walk miles and miles,” Alessandra concluded, although he acknowledged that the “preferred motion” of the Mastino is the walk as well as the trot. If a Neapolitan Mastiff paces, the judge sometimes has to differentiate between a dog who chooses this gait because he is feeling lazy and uninspired – or because he is compensating for a much more serious problem. “Sometimes they pace because of dysplasia, or because they have other health problems,” he noted. “In order to ascertain what the problem is, the judge often asks the dog to trot.”

Those who would like an unambiguous answer about pacing Mastinos are not likely to find one among the world’s Molosser experts. “We’d prefer they didn’t, but it a good one does, oh, well …” sort of sums up the conventional wisdom.

For a more eloquent description, we leave you with Rafael Malo Alcrudo of Spain, a Molosser expert and judge who points to Carnera della Grotta Azzura as an example of a great Mastino who should not have been penalized – and wasn’t – for being a pacer.

© Modern Molosser Magazine. This article may not be reposted, reprinted, rewritten, excerpted or otherwise duplicated in any medium without the express written permission of the publisher.
Fri, 08/07/2015 - 4:13pm