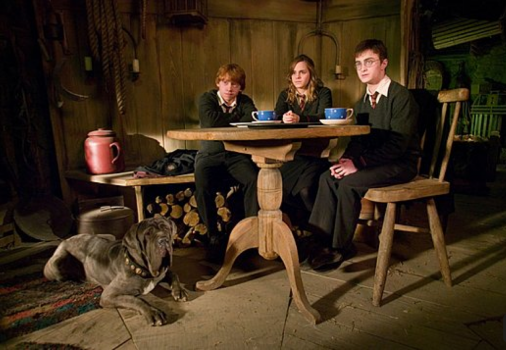 The Sphinx-like down tells you this Mastino actor was more interested in something off stage.

Like it or not, movies take creative license. And Molosser fans who are devotees of author J.K. Rowling’s “Harry Potter” oeuvre are glad they do.

In Rowling’s hugely popular books about young wizards coming of age amid metaphysical mayhem, Hogwarts gamekeeper Hagrid owns a “boarhound,” or Great Dane, who lives with him on the grounds of the wizarding school. Described by Hagrid as “dozy,” or lazy, Fang is also a slobberer. But despite his booming barks, he is also a certifiable coward, fleeing at the slightest whiff of trouble.

Presumably for greater impact, a Neapolitan Mastiff was cast instead of a Dane in the Fang role. A revolving door of British Mastini played him: Hugo, Bully, Bella and Vito in the first two movies, followed by Luigi, Monkey and Uno.

Actor Daniel Radcliffe, who played Harry Potter, said that during filming of the second film, “Harry Potter and the Chamber of Secrets,” Bella the Neo took it upon herself to become his protector, leaping in front of anamatronic spiders to ensure no harm befell him. Leave it to a Molosser to improvise.

© Modern Molosser Magazine. This article may not be reposted, reprinted, rewritten, excerpted or otherwise duplicated in any medium without the express written permission of the publisher.
Tue, 10/20/2015 - 7:56pm