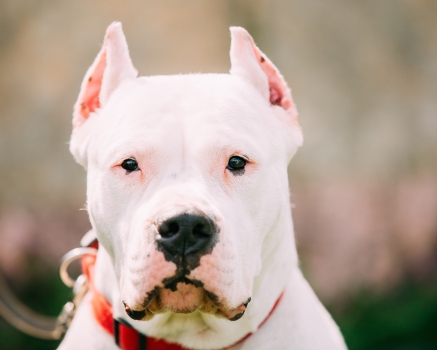 A fancier of 60 years lauds the "King of the Pampas"
By
Dr. Raul Zeballos
A marvel of genetic engineering, El Dogo Argentino was developed in the first half of the 19th Century to protect cattle from natural predators such as mountain lions and Russian boars running at large on the Argentine territory. The architect of the breed was Antonio Nores Martinez, a medical doctor who was aided by his younger brother Agustin Nores Martinez, an attorney.
El Dogo Argentino was introduced to the public by its developer Dr. Antonio Nores Martinez at the Hunting Dog Show organized by the Buenos Aires Hunters Club on the grounds of the Argentine Rural Society on September 28, 1947.
In closing his dissertation at that event, Dr. Nores Martinez held an impressive Dogo Argentino with one hand and his standard for the breed in the other. He then told the public: “If you like this dog and want to preserve it, you need to follow this prescription ...”
It was the result of a 20-year long genetic program based upon an ancestral breed, functionally known as the Cordoba Fighting Dog. That breed was a mixture of English Bulldog, Bull Terrier, Mastiff and the Alano Espanol brought by the Spanish conquerors and kept by the native people of South Central Argentina. The Cordoba Fighting Dog was used in the cruel sport common in the Cordoba Province of Argentina in the 18th Century, and eventually went extinct after dog fights were outlawed there in the early 1900s. 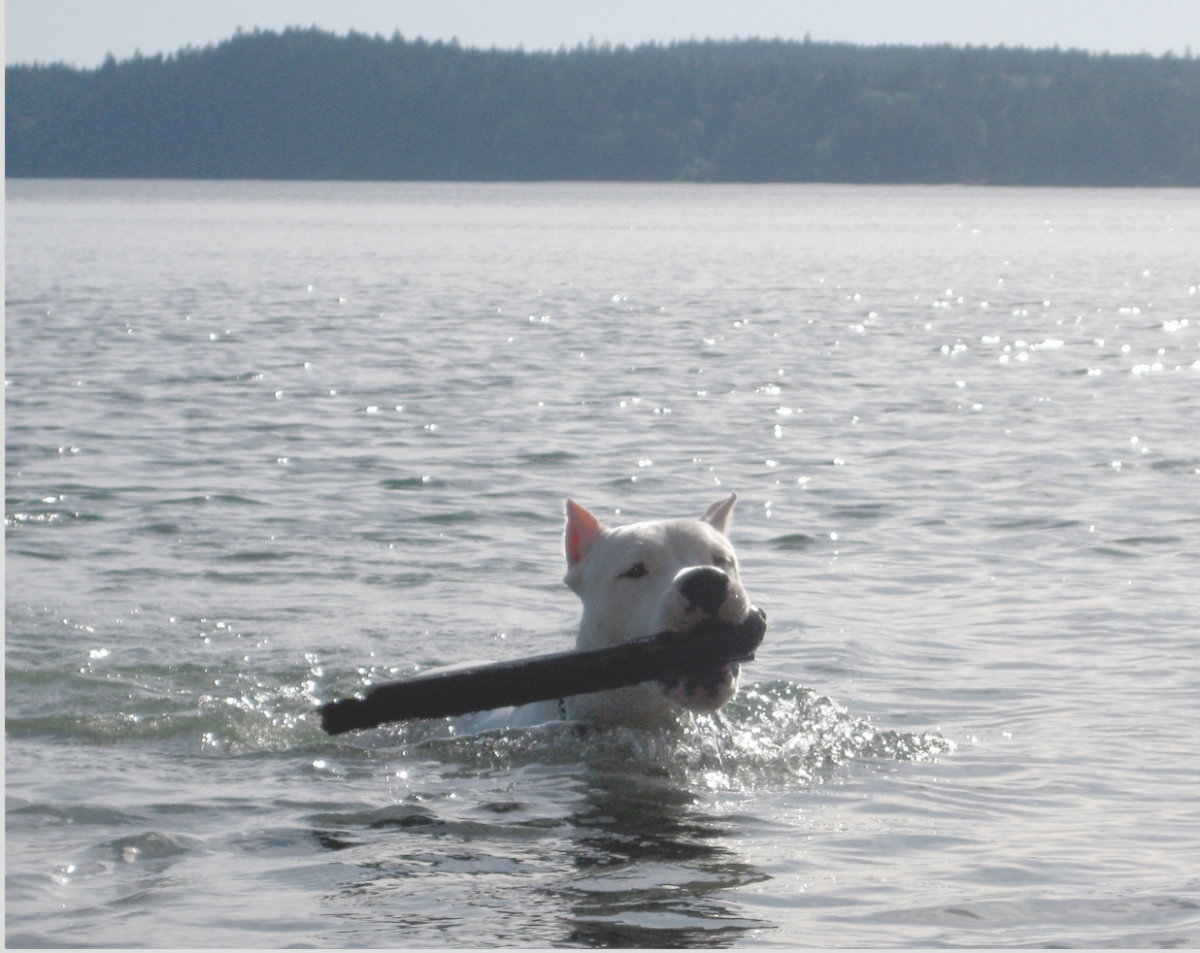 King de las Pampas swimming in the Pacific Ocean.
In Dr. Nores Martinez’s scientifically designed breeding program, the Cordoba gladiators received blood from the English Mastiff, Bulldog, Bull Terrier, Great Pyrenees, Great Dane and Pointer. He named his new breed El Dogo Argentino in a homage to his homeland.
El Dogo Argentino was conceived to be a big-game hunter, useful to mankind in the control of large predators on the Argentine territory. Yet as the Dogo became more popular, we saw his excellence in many diverse uses, such as protection, therapy, search and rescue, military, even as seeing-eye dogs.
As a youngster living in Argentina when the Dogo first made his debut, I was mesmerized by the legendary white “King of the Pampas.” A few years later, in 1950, thanks to the efforts of my grandfather, I received my first specimen directly from the creator of the breed.
The dog was named Dogo de Los Incas, my dream come true, and the beginning of my 60 years of interaction with the breed. 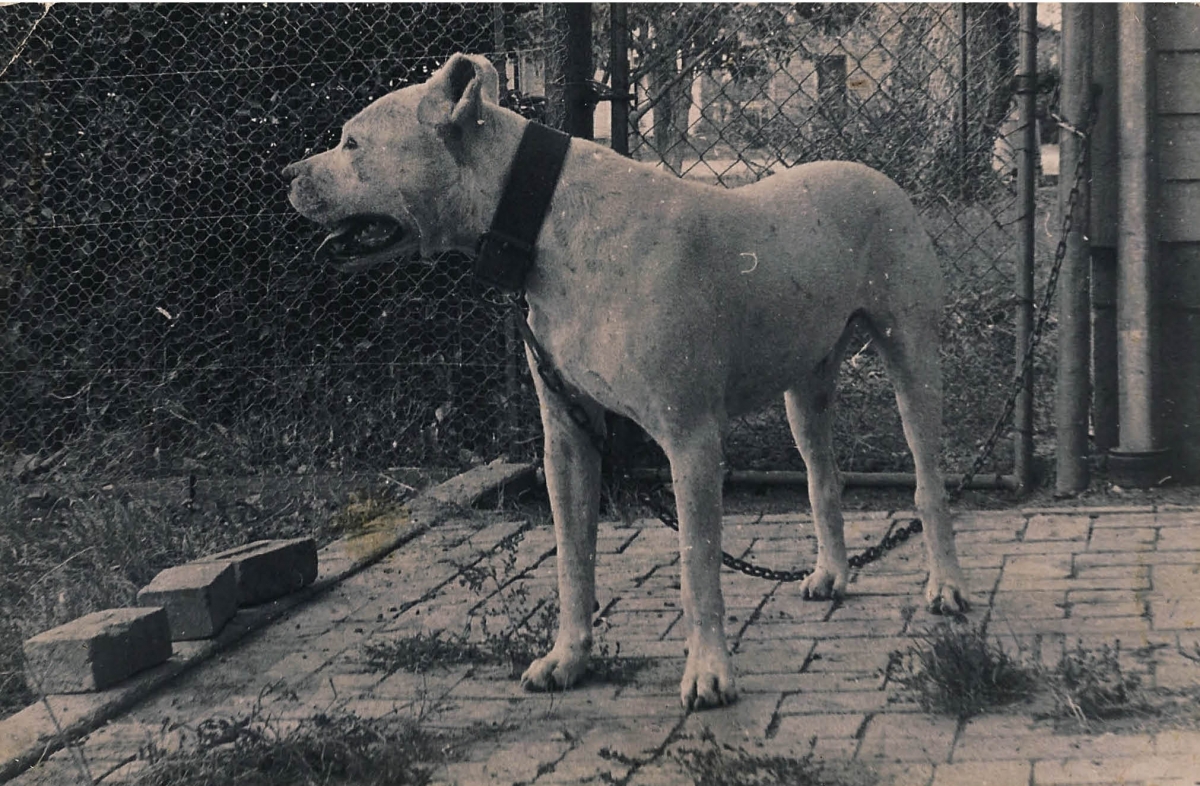 Dogo de Las Incas.
How fortunate I was to have one of these fine dogs! In those days, they were not for sale. They were what you might consider on loan. Dr. Nores Martinez could come and collect his Dogos at his pleasure, depending on his needs for breeding or hunting. Only after my devotion was proven and many personal interactions with the Nores Martinez family, the Dogos in my tenancy were transferred into my name.
Ever since, hours of my time have been spent learning the conformation, form and function of the Dogo Argentino. These dogs have their own way of teaching you their intimacies. It has been my life-long quest to keep the breed original. 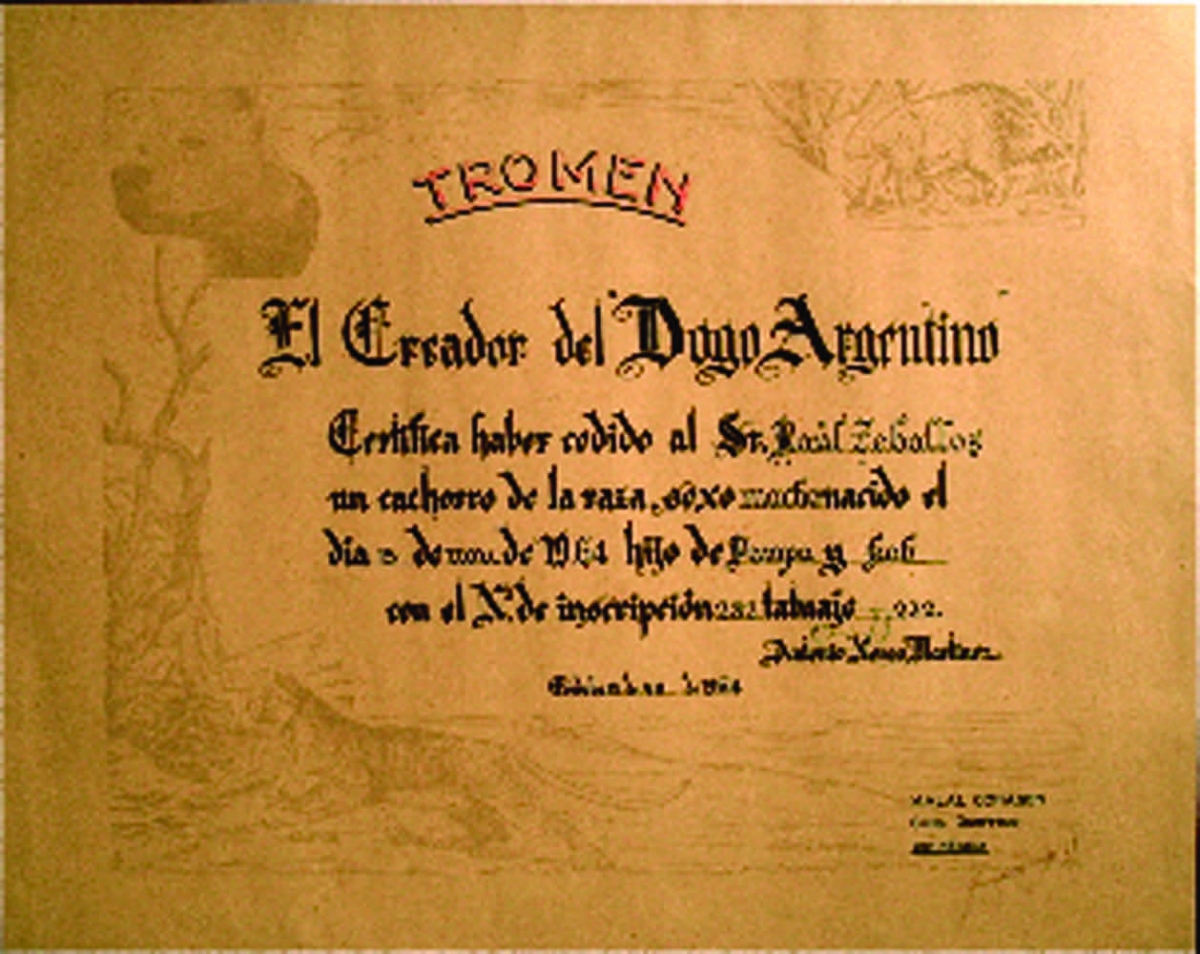 Certificate of origin for “Tromen de Las Pampas,” issued by Dr. Antonio Nores Martinez,
developer of the Dogo Argentino.
In 1966, I moved from Argentina to Texas, and in 1970 I brought six Dogo Argentinos with me (three males and three females of the existing blood lines). They were the first to come to North America.
In describing El Dogo Argentino, Antonio Nores Martinez used to say “... harmonically beautiful, within the physical parameters required to perform its duty” and “... it is the only white, short-haired dog of its size and weight, which are optimum to achieve its work.”
These statements clearly indicate that, in this breed, form follows function; that color, size and weight are basic, identifying attributes, closely related to work performance.
Developed to find, chase and struggle with large, dangerous predators, these canines must be endowed with superior bone and muscular mass. Their large, massive head is proudly supported by a thick but graceful neck that connects to a well-balanced body, which in turn is supported by straight, sturdy forelegs and strong, normally angulated hindquarters. The thick, long tail hangs naturally to the hocks and is carried in a smooth upward curve.
Well-bred Dogo Argentinos show their type and lineage at a very early age.
The massively muscled Dogo Argentino is a superb canine athlete. When in motion, he is a larger-than-life combination of barely contained explosive power and lightning speed, coupled with tremendous stamina and unbelievable agility.
A magnificent hunter of wild boar and mountain lion, El Dogo Argentino has extremely strong hunting instincts, incredible determination and legendary courage. 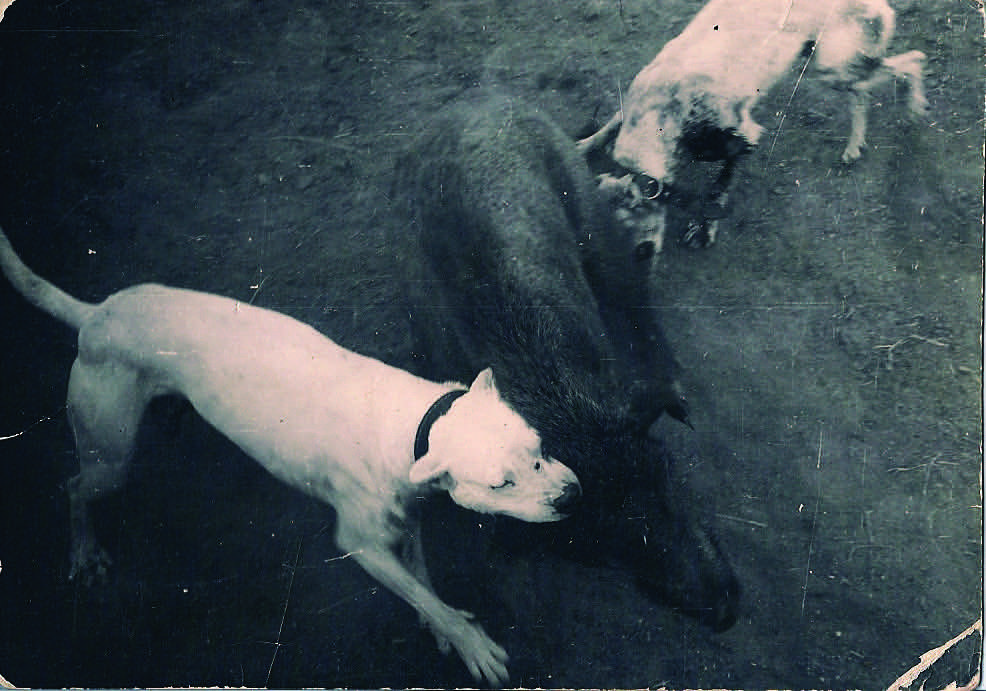 Kob de Las Pampas boar hunting.
The Dogo Argentino and the original breed standard are intellectual property of Antonio Nores Martinez and should be respected as such.
Unfortunately, this is not happening. Sixty-three years after its introduction to the public, the breed is being endangered by the profusion of standards.
Each group that incorporates the breed to their activities (registrations, clubs, etc.) feels empowered to introduce its own changes to the original breed standard. These changes include size, weight, proportions, coat color, bite, etc.
Modifications of such important characteristics change the quality of the animal’s performance in the work for which it was designed. Just to cite a few examples:
- The change in size and proportions causes displacement of the dog’s center of gravity and downgrades its balance, so important in his function and appearance.
- The increase in weight diminishes the speed and range of the dog in the pursuit of prey.
- The change from a scissor bite to a pincer bite decreases the holding ability of the dog and the life of its teeth.

Example of 7-week-old Dogo puppies.
Today at the dog shows, a diversity of Dogo Argentinos can be seen: tall, short, wide, narrow, you name it. This makes it difficult for the public, even for judges, to decide on which is the “real” type. Under these circumstances, dog shows lose their value as tools for the breeders to evaluate their specimens compared to the general status of the breed.
As a practical matter, changes in standards set elusive goals for breeding programs. It is easier to hit a static target than a moving one. In reality, it is easier to breed outstanding Dogo Argentinos faithfully following the original breed standard. I present the reader with a living example. Observe the astonishing similitude between two Dogo Argentinos bred half a century apart. 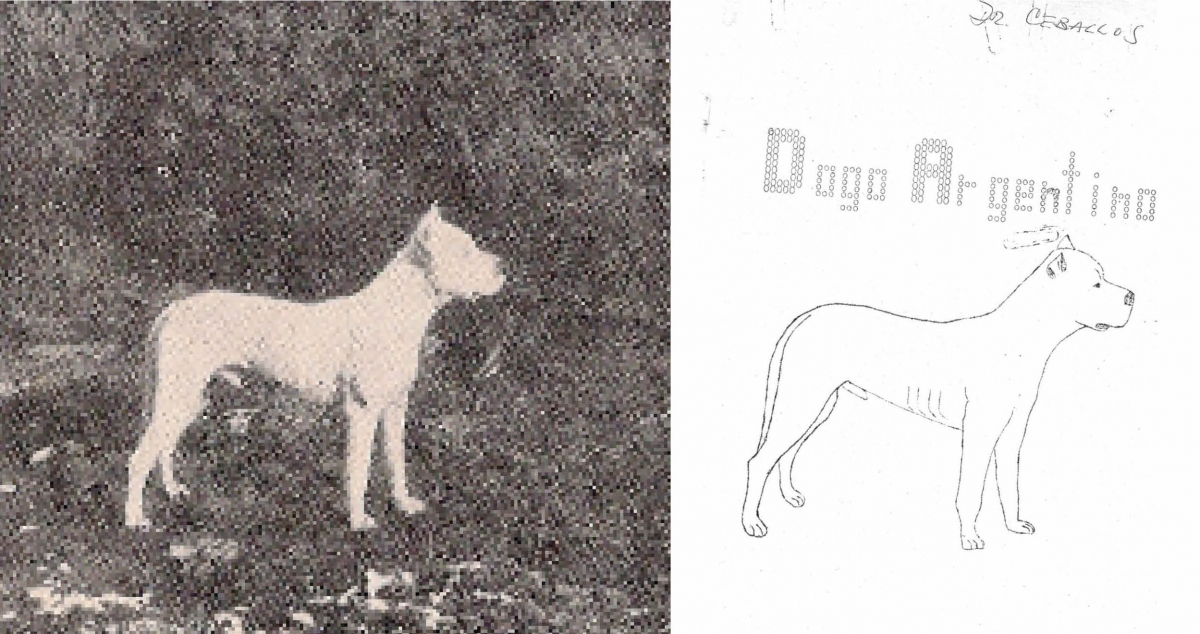 Left: Kob de Las Pampas in 1964. Right: Kob was the model for the breed-standard illustration submitted to the Argentine kennel club that same year by Dr. Nores Martinez.
On one end is “Kob de Las Pampas,” number one Dogo Argentino in the registry of FCA, also considered the ideal of the breed by Dr. Agustin Nores Martinez in his book “El Dogo Argentino” (Editorial Caporaletti, Buenos Aires, 1969). Kob was used to illustrate the breed standard submitted to the Argentine Canine Federation (FCA) by Dr. Agustin Nores Martinez with his request for acceptance of the breed as such, in 1964.
At the other end stands “Juanon de Las Pampas” (photo below taken in 2009). 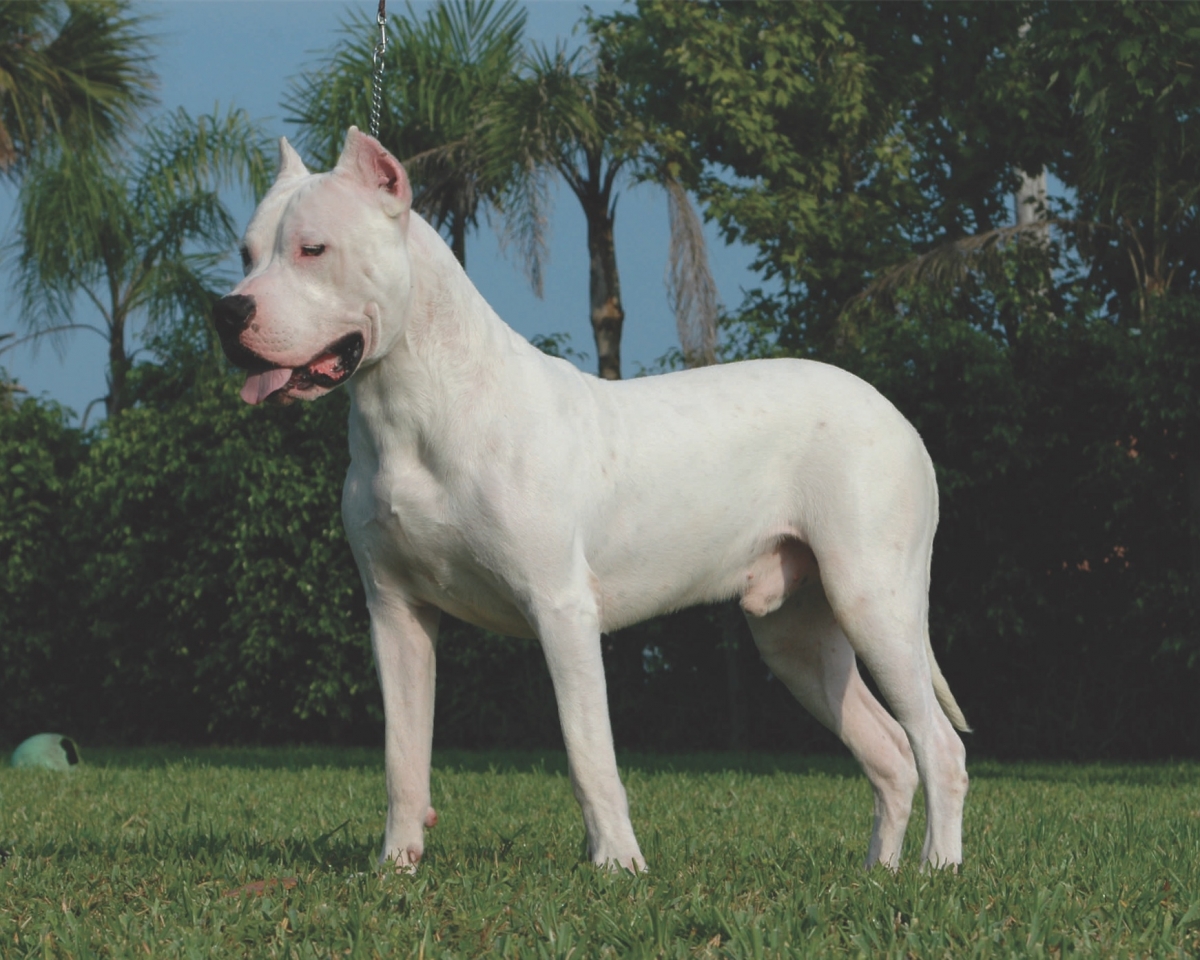 Juanon de Las Pampas.
On the functionality side, the Dogo Argentino is the only prey- and big-game hunting dog still used in these pursuits. Thus, a good specimen must have the traits for which the breed was developed. Field trials are useful tools for the breeder to protect the Dogo Argentino instinct and temperament.
I recognize that most owners are not interested in the hunting aspect of the breed. Therefore, I consider the training and use of Dogo Argentinos for different ethical applications useful to mankind to be of utmost importance for the breed’s protection. 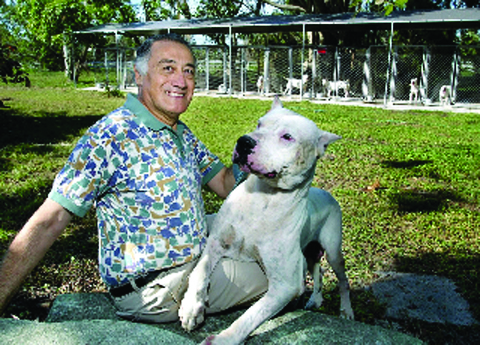 Raul Zeballos is a geologist and native Argentine who lives in Florida. He was the first person to bring the Dogo Argentino to the United States in 1970, as well as Colombia in 1974.
© Modern Molosser Magazine. This article may not be reposted, reprinted, rewritten, excerpted or otherwise duplicated in any medium without the express written permission of the publisher.
Thu, 03/29/2018 - 10:00am