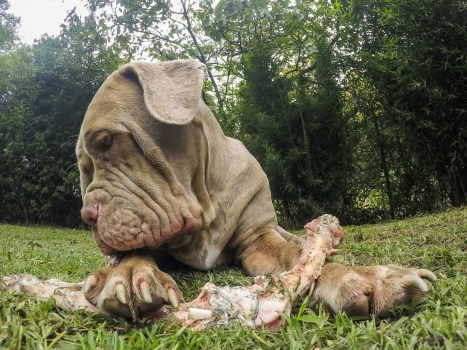 The pros and cons — but mostly pros — of naturally reared and raw-fed Molossers
By
Jennifer Forsyth, VMD
I have been feeding raw food – uncooked meats, bones and organs – to my dogs for the last six years.
After two years as a practicing veterinarian, I felt frustrated by the number of sick pets that were not getting better despite my best efforts, especially dogs that had chronic skin and intestinal problems. Then my Dogue de Bordeaux, Lily, became one of them.
Lily lost 20 pounds, had a dull, dry, patchy coat, no energy and diarrhea. Part of the problem was her thyroid, but she wasn’t getting better with thyroid medication. At only four years of age, this shouldn’t have been happening.
I took her to see a veterinarian who practiced holistic medicine, and she suggested a raw-food diet. Everything I had learned in vet school went against feeding raw meat. I was taught that feeding a dog raw meat equaled a dead dog. When Lily was sick, and I felt she was dying anyway, I thought, “What do I have to lose?”
After feeding a raw diet for several months I realized that I didn’t lose anything, but instead I gained a dog that was healthy and thriving with only minimal amounts of thyroid hormone. It was then that I decided to learn more about holistic medicine and nutrition. 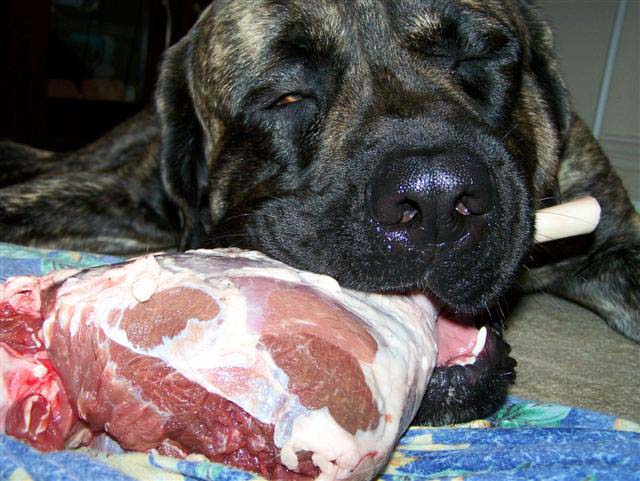 In 2004, I took Dr. Richard Pitcairn’s professional course in veterinary homeopathy. I was already using the recipes from his book, “Dr. Pitcairn’s Complete Guide to Natural Health for Dogs & Cats,” and still use them to this day. It was there that I learned about Francis Pottenger’s cats. He did a study comparing cats being fed cooked meat to cats fed raw meat. The cats who ate cooked meat developed degenerative diseases and became lazy after one generation. The second generation developed degenerative diseases earlier in life and also experienced diminished coordination. By the third generation, Pottenger was seeing symptoms that looked a lot like what I was experiencing at my veterinary practice: early-onset degenerative diseases, increasing numbers of cats with parasitism (fleas and intestinal worms), many skin diseases and allergies, aggression and personality problems, bone abnormalities, a decrease in reproduction, and shorter life spans. The most interesting thing was that when these cooked-meat-fed cats were put back on a raw-food diet, they recovered somewhat. Unfortunately, it wasn’t until four generations later that the cats recovered full health.
Beyond the benefits of feeding raw, there is also the concern about what is or isn’t in commercial pet food. At the most basic level, I like to think in these terms: Would I eat a dry pelleted food called Human Chow? If Human Chow met all of my daily requirements for protein, fat, carbohydrates, vitamins and minerals, and even if it came in different flavors, I don’t think I could do it. There is just something intuitive inside me that says, “You need fresh food.” Cooking food deteriorates vitamins, proteins, minerals, enzymes and just about everything else. I also want to avoid feeding my dogs artificial ingredients like ethoxyquin, BHT, BHA, propylene glycol, high-fructose corn syrup and food colorings.
I now have many clients who feed their pets raw food. It is rare that I come across two people who are feeding the same way. I’ve also noticed that people who feed raw are almost always certain that their way is the correct way. So I’ve decided to talk about how I personally feed my dogs and about what I think people shouldn’t feed. 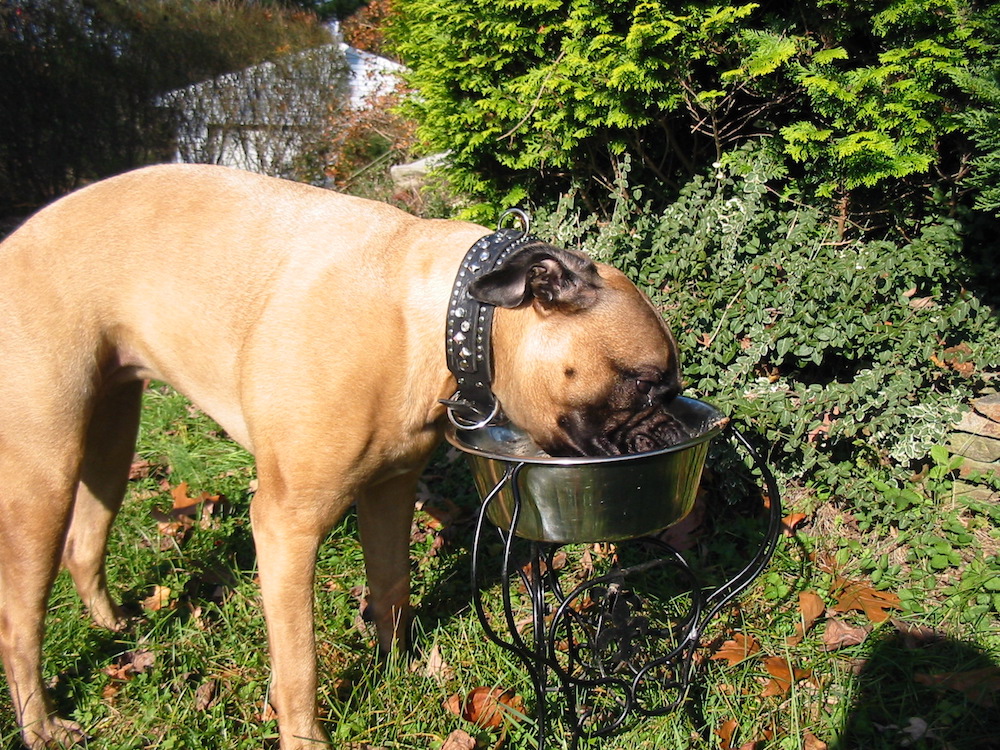 As I mentioned before, I feed my dogs food made from recipes in Dr. Pitcairn’s book.  I like his recipes because they contain high-quality ingredients and have been balanced to make sure that the amount of each nutrient meets or exceeds the minimum amounts recommended by the American Association of Feed Control Officials. These recipes do include grains.
Many people who feed a raw diet do not think dogs should be eating grains. I have decided to include grains in my dog’s diet for several reasons. When cooked, grains provide carbohydrates, vitamins, minerals and protein. Providing mostly meat and no grains can become costly, especially when feeding multiple Molossers. In this country, meats have a high level of chemical contamination like lead. Adding grains decreases the amount of chemical pollutants and also decreases my dog’s environmental impact.
For similar reasons, I don’t use bone meal. I use Calcium from the Sea (Natural Calcium) from Animal Essentials in my recipes. Unless you can obtain organically raised pasture-fed or free-range beef or chicken, turkey or lamb may be a cleaner or purer source of meat.
I do not feed raw game (like rabbit or venison), pork or fish. Game meats more frequently have parasites such as Giardia, pork can have Trichinella, and raw fish such as salmon can be infected with a nasty parasite that could potentially cause fatal salmon poisoning. I personally do not feed raw bones. I have chosen to decrease my dog’s bone consumption to decrease the levels of heavy-metal pollution in their diet. Plus, my big girls are gulpers, and I want to avoid any choking hazard. 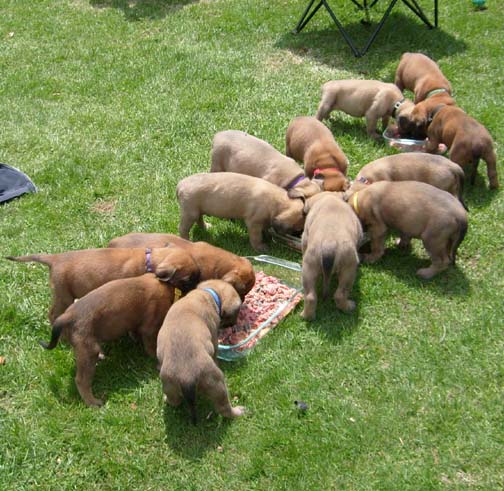 While I haven’t been concerned about bacterial contamination myself, I do think it is worthwhile to point out what many of my colleagues think is the biggest risk to feeding raw food: possible contamination with Salmonella, E. Coli and Campylobacter. There have been several reports of veterinarians who have felt that dogs became ill after eating raw food. There is also concern that even if dogs don’t get sick, they can shed bacteria in their stool, causing possible environmental contamination where people could be exposed and become sick.
When I don’t have the time to cook, I use a pre-prepared frozen raw food. I use Primal Formulas or Mixes (not the Grinds) because I like the ratios of meat and bone to produce. I have tried some other varieties that were 95 percent meat and bone, but my dogs tended to get hard, white stool. I have had people tell me that that type of stool is normal for dogs eating raw diets – it is not. Dogs should have brown stool that isn’t crumbly. The other reason I like Primal is they disclose the sources of their meats. After the pet-food recalls, I was shocked to learn that where a manufacturer obtains its meat and packages its product is propriety, or private, knowledge. As a consumer, I demand to know where my dog’s food came from and where it is packaged. The other benefit to Primal is that it comes in 5-pound “chubs,” or rolls, which makes it more economical than buying patties or nuggets.
While I haven’t personally used Urban Wolf and Sojourner Farms (Sojos) mixes, I do like and recommend these products to my clients who want a grain-free recipe. I especially like these for clients who come to me feeding only chicken carcasses. I do not think grinding up chicken carcasses (even if organic and free range) is a balanced diet. Both Urban Wolf and Sojos are dried mixes that can be added to raw meat to balance the diet.
If you aren’t ready to make the plunge into raw, there are great products from Honest Kitchen and Addiction. While the meats are dehydrated at a temperature where they are considered cooked, they are still minimally processed. The fruits and veggies are dehydrated at a lower temperature where they are still considered raw. Just add warm water and voilà – food. Addiction is a great option for dogs suffering from chicken, turkey and beef allergies. They have other meat options including lamb, venison and brushtail (a marsupial found in large numbers in New Zealand). There are also recipes in Dr. Pitcairn’s book for recipes that can be added to dog kibble to give them some fresh food. 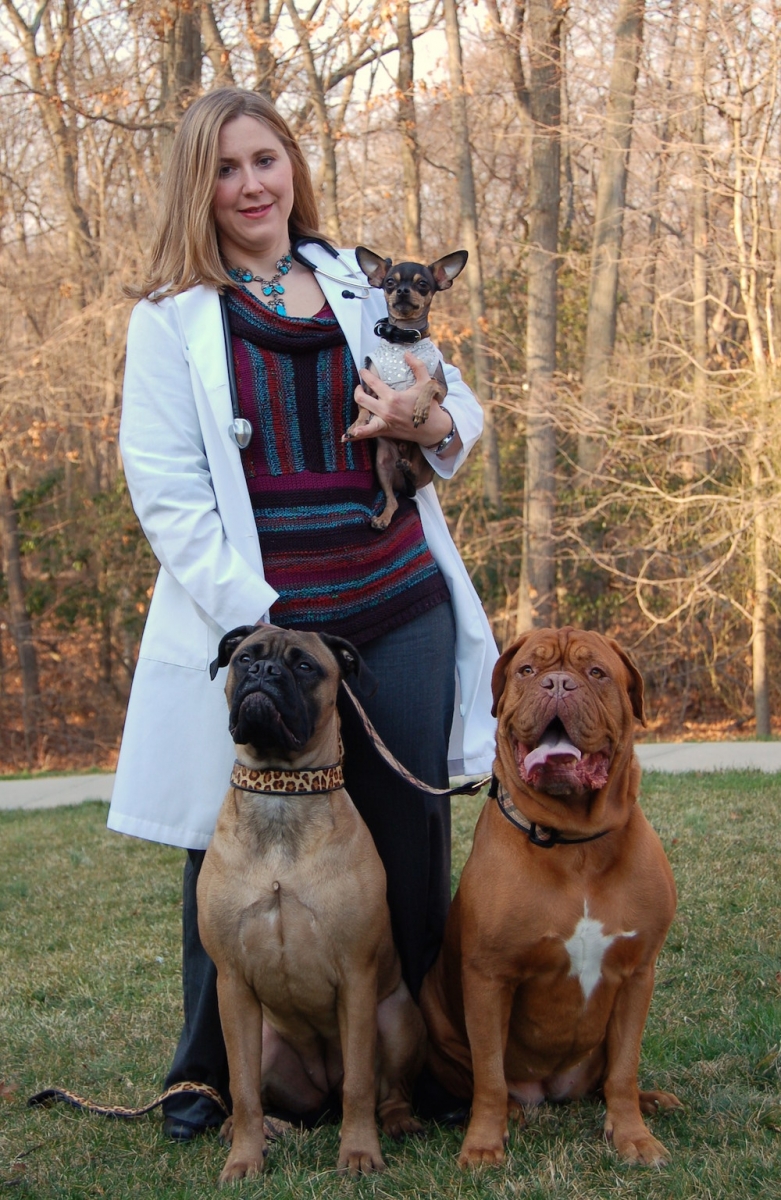 Jennifer Forsyth, VMD, graduated from the University of Pennsylvania in 2001, and practices holistic, homeopathic and conventional veterinary medicine at Bethel Mill Animal Hospital in southern New Jersey. She has a Bullmastiff, Petunia; a Dogue de Bordeaux, Syna; and a Chihuahua, Seaweed.
© Modern Molosser Magazine. This article may not be reposted, reprinted, rewritten, excerpted or otherwise duplicated in any medium without the express written permission of the publisher.
Thu, 08/09/2018 - 8:05pm