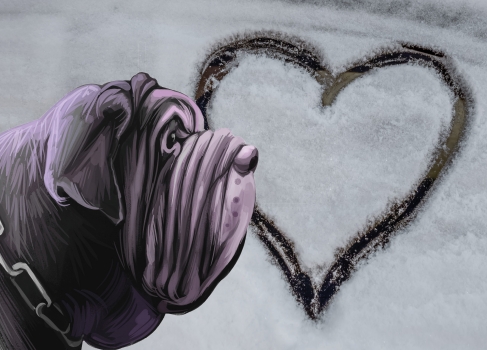 Ode to the Neo

I like Neapolitan Mastiffs. You got a problem with that?
By
Denise Flaim

Let’s get this out of the way right now:

Stop right there – I saw that. I saw that dismissive wrinkling of your nose, that roll of your eyes, and, yes, that perceptible snort. (You got coffee on your shirt, by the way, so there.)

Appreciation comes from understanding, and, conversely, disdain comes from lack of knowledge. So let me tell you what I know about this magnificent, primordial breed, in the hopes of at least neutralizing contempt into grudging acceptance. It’s about baby steps, after all.

First, semantics: Even though the breed is informally referred to here as the “Neo,” the full name is correctly spelled with an “a” as the third letter. So: Neapolitan Mastiff, never Neopolitan. Next: Throughout the FCI world, the Neapolitan Mastiff is known by its Italian name, the Mastino Napoletano, or just Mastino. The plural of Mastino is Mastini. Someone who breeds Mastini is a mastinaro. What do you call two or more people in a room who breed Mastini, besides an argument waiting to happen? They are mastinari.

Just as that Neapolitan Mastiff terminology may seem complex at first glance, so are the varying attitudes toward the breed from outsiders. The shallowest reaction is sheer revulsion, fueled by an aversion to drool. To be sure, I am always aware of incoming slingers, as Neapolitan Mastiff drool appears to be of a completely different chemical composition than that of other Molossers, developing a cement-like quality when dry. 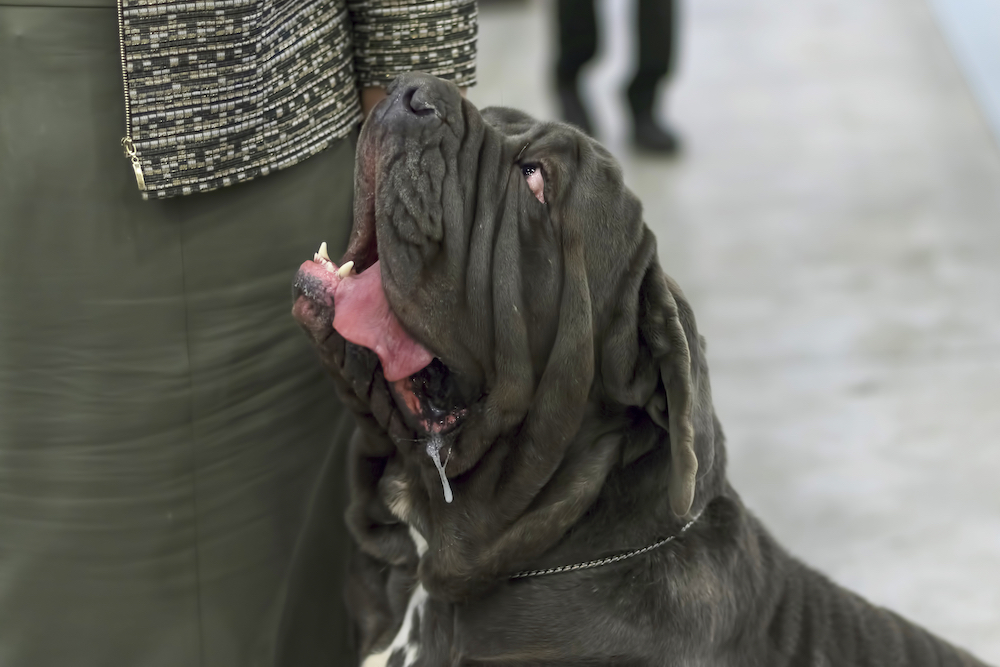 So they drool. Get over it.

Then there are those Neapolitan Mastiff critics who are put off by its aesthetics. Having never had the opportunity to see stellar examples of the breed, their impression is that of a shuffling, broken-down ox of a dog, covered with lymphatic skin that does an excellent impression of a melted ice-cream cone.

I agree with them in part: Such extreme dogs – the word used overseas is “hypertypical” – are not appealing. Neither are they correct. Neapolitan Mastiffs can be sound. They can have rear strength with appropriate angulation. They can move with soundness, albeit with the leonine elasticity that is so typical of the breed.

The late Rhoda Winter Russell, in whose honor the breed’s recent national specialty in Tennessee was held, was a Sighthound enthusiast who fell madly in love with the Neo, judging the breed’s first national in 2005. A professional dancer, she brilliantly saw the Mastino through the prism of that art form.

Sighthounds like her Salukis, she explained, are like ballet – “ethereal, uplifting, defying gravity, full of many spectacular leaps and jumps and much partnering,” as they often hunt in unison. “With their grace, beauty, structure, flowing lines and movement habits,” she wrote, Sighthounds “in many ways parallel, and are the epitome of, la danse.”

“But dance has another side, or face, one in which I also had experience – what was termed ‘modern’ dance,” she continued. “This approach was focused on the ground, the earth and, originally, a single dancer, alone, or sometimes with a surrounding supportive chorus of dancers as background.”

This, to Winter, was the Mastino Napoletano – a self-study in stillness and gravity, “and then, at times, a quietude in conclusion.”

Continuing that theme of artistic appreciation, one of my mentors in Molossers, Bas Bosch of Belgium, compares the Neapolitan Mastiff to traditional music. If the Mastiff is like an English folk song, played on centuries-old instruments like the lute and harpsichord with that typical British lilt, then the Mastino is opera, pure and simple.

“It is difficult to find a culture in Europa that is more the opposite of the English than the Italian – the country where life is embraced and celebrated, the heart speaks, shouts, where the most exuberant sort of classical music, the opera, flourishes as in no other country on earth,” he writes. “The most obvious difference – not to talk about color, that’s silly – between the Mastiff and the Neo is the amount and quality of skin. In the Mastiff it is like an English song, in the Mastino it is the opera.” 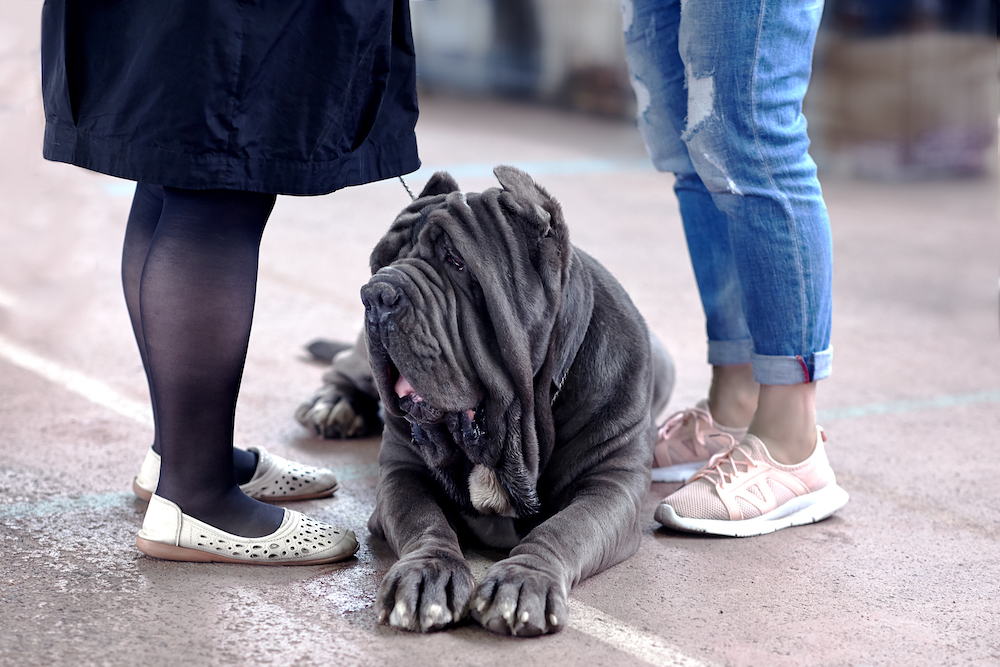 The breed can be a dividing line between those fanciers who appreciate them, and those who do not.

Since an evening at Carnegie Hall is best initiated with a pre-performance meal, here’s my own metaphor. If we think of dogs in culinary terms, the Mastino Napoletano is umami – an earthy, brothy, meaty counterpoint to the sweetness of a toy dog, or the saltiness of a terrier.

The problem with Neapolitan Mastiffs – and indeed, most of the Molosser breeds – is that their type is so amplified, so grandiose, that missing the mark is felt more keenly than in less extreme breeds. (How apt to remember both Rhoda and Bas’ metaphors here: A missed note during an aria is much more evident than one sung in a chorus.) Neapolitan Mastiffs that lacks bone and substance immediately mud-slide into Cane Corso territory; conversely, too much exaggeration, and they begin to approximate gargoyles.

This, I think, is at the heart of why so few judges are truly able to appreciate Neapolitan Mastiffs: They simply have not had the pleasure of hearing that perfectly rendered high note, as regular entries of the breed often lack both the quantity and quality that was evident in Tennessee. Only then can they appreciate the difference between a fat lady singing and Pavarotti belting out “Nessun Dorma.” 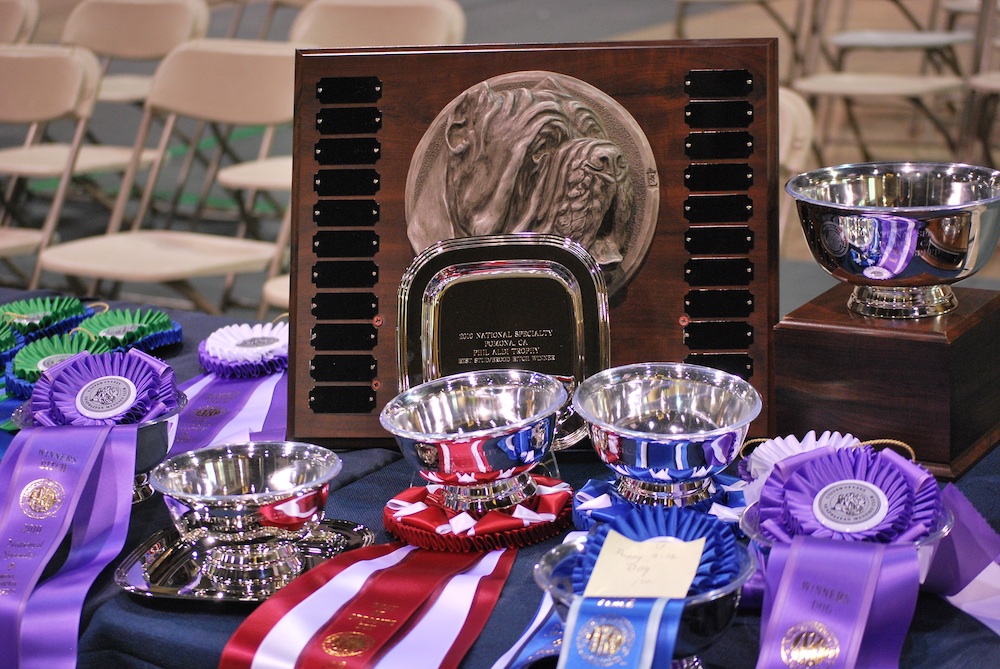 In the Neapolitan Mastiff’s early years of AKC recognition, an acronym was devised to help judges remember breed priorities – WHaM, which stands for wrinkles, head and mass. But like all shorthand, it can become problematic if those individual letters are not invested with any depth.

At the very beginning of my education in Neos I was taught that it is the quality as much as the quantity of wrinkle that matters. The metaphor that has stayed with me is that of your grandmother’s sofa: Like that dusty old upholstery, the correct wrinkles on a Mastino are stiff, rigid, durable, immobile. Not the weak connective tissue that has taken hold in the breed, resulting in thin, drooping skin that runs into the eyes, compromising both sight and quality of life.

In Europe, the judging of the Mastino Napoletano is considered to be synonymous with connoisseurship. Some of the most distinguished and respected judges in Italy – Nicola Imbimbo, Guido Vandoni, Claudio de Giuliani, Barbara Zanieri, Fabrizio La Rocca, Giuseppe Alessandra, Antonio Di Lorenzo and Massimo Inzoli, among others – are Mastino experts and some even erstwhile breeders themselves. Having seen the breed in Italy in recent years, I can say without hesitation that our best American-bred Mastini are not only competitive in their country of origin, but can and have taken top honors.

Though judges strive to adjudicate every breed with the same level of enthusiasm, there are naturally some that draw our interest more than others. While you may not go out of your way to watch modern dance, or listen to opera, or spread your sandwich bread with Vegemite, you might consider a small sampling.

© Modern Molosser Magazine. This article may not be reposted, reprinted, rewritten, excerpted or otherwise duplicated in any medium without the express written permission of the publisher.
Sun, 10/27/2019 - 4:38am