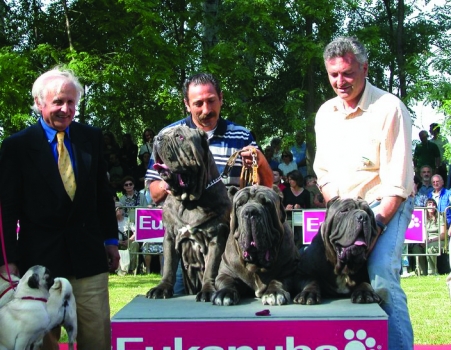 A longtime Neapolitan Mastiff breeder-judge shares his impressions and memories of the breed
Breeder-judge Guido Vandoni of Correzzana, Italy, has been the breeder and owner of many Italian and International champion Neapolitan Mastiffs, as well as French Bulldogs, English Bulldogs, English Cocker Spaniels and Miniature Schnauzers. An international FCI judge since 1975, he has judged in Europe, Asia and the Americas, and has authored books and articles on the Mastino Napoletano, Cane Corso and other Molosser breeds. In this wide-ranging interview, he discusses ideal Mastino temperament, problems of hypertype, and his favorite memories of the breed.
Tell us about the first time you saw a Mastino Napoletano.
At a young age, I found myself in Naples for the Italian army. Practically a stone’s throw from the barracks was a small breeder of these dogs, at a time when they were not very common outside the Neapolitan region. My attention was immediately drawn to the majesty of a dog that left me smitten, a classic case of “love at first sight.” 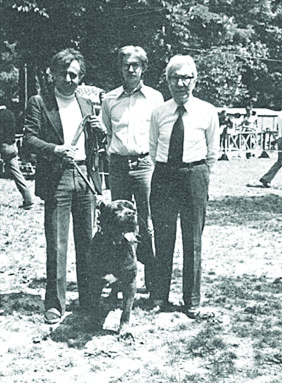 Guido Vandoni, then-Molosser Magazin publisher and judge Christofer Habig and Piero Scanziani, founding father of the breed, at the Special Show in Florence in 1979 with Best of Opposite Se, Maga del Principe.
How did you get involved in the breed?
Years later, in my new country house, I realized I was missing something to make it safe and special. I understood immediately that what I wanted was a Mastino Napoletano, and I acquired just that from a breeder in the Naples area. He turned out to be more than just a guard dog – he was an extraordinary life companion.
What attracted you to the Mastino?
I have already mentioned the majesty that made such an impression on me during that first encounter, but there was also that air of an archaic dog, almost a survivor of antiquity. And then, the dog’s history, his spread in a limited, geographically well-defined area, or, more generally, his Mediterranean essence, with the ensuing sentimental implications that the Mediterranean, as the cradle of Western culture and civilization, raises. 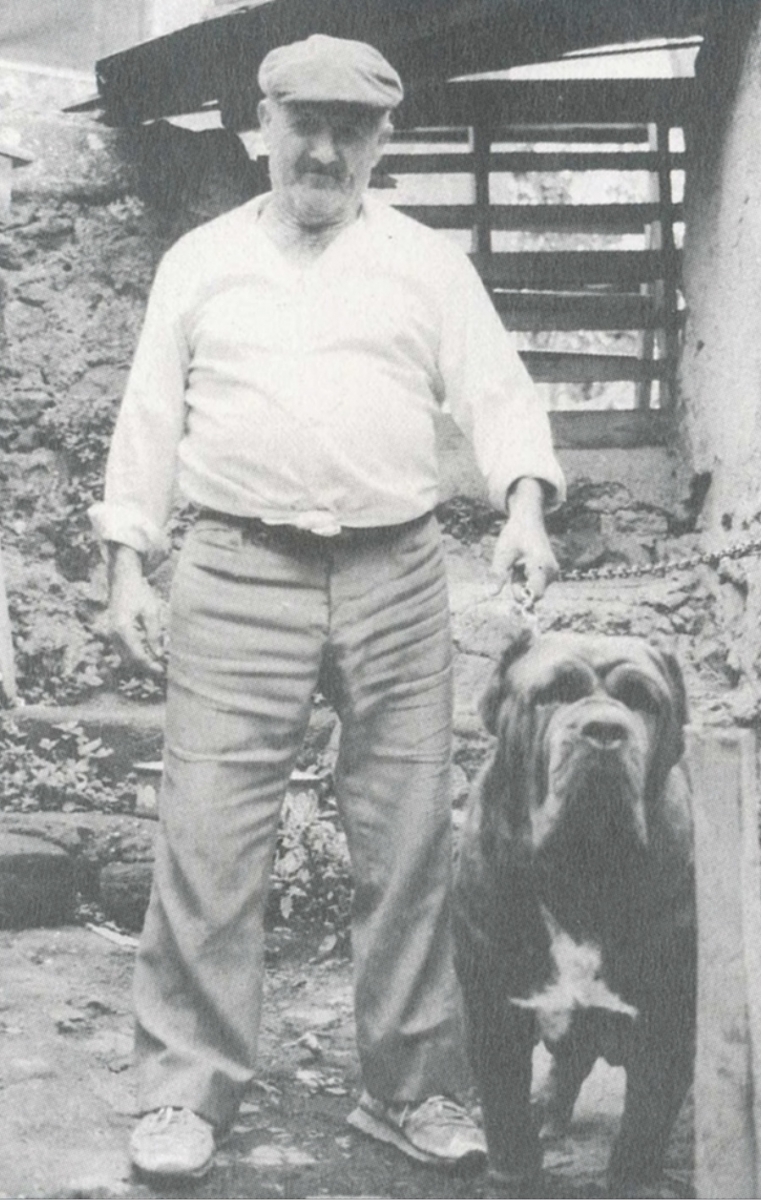 Francesco Manno. Photo credit: "Il Mastino Napoletano" by Guido Vandoni, 1992.
Who were your mentors in Mastini?
I have had the pleasure of personally knowing the “discoverers” of the Mastino Napoletano, Ruggero Soldati and Piero Scanziani, and later also the Neapolitans Don Paolino Scotti, Bilangione, Francesco Manno (owner of the mythical Masaniello, “u cane de la montagna”) and many others. Among the breeders far from Naples, I like to remember Giuseppe Benelli (del Canedoro) and that Mario Querci, holder of the Di Ponzano affix, who gave a modern look to the breed. What have they given me? It is difficult to answer, because each of them has left me something. And it is the synthesis of what each of them gave me that created my “taste” for a Mastino Napoletano of an “antique” type, but functional and in that respect modern. Among my teachers I cannot forget the judges Mario Perricone and Raffaello Mariotti, who taught me the art of looking at – and seeing – the Mastino Napoletano within the four ring gates.
What is the biggest challenge in breeding Mastini?
Breeding the Mastino Napoletano is certainly one of the most difficult things, and the richest of unknowns. By the end of World War II, only a few examples of the Mastino had survived. The recuperation of the breed has been a heroic undertaking by a handful of well-deserving fanciers. Successive generations of the breeders were confronted with diverse types. Making the breed homogenous was the first challenge. Making the Mastino Napoletano a functional dog capable of moving freely in confined spaces, as his function dictates, has been the second challenge, a challenge that continues still.
What virtues do you think are most difficult to maintain in the breed?
The virtues that are most difficult to safeguard are those tied to the majestic appearance and at the same time of the “antique” traits,” owing to the inimitable design of the wrinkles, but also closely tied to a looseness of the cartilaginous  tissue. This looseness is accompanied by loose joints. Which basically brings us back to the previous point: Keeping type with the requirement to create a functional dog.
What faults do you think are most difficult to eradicate?
In the search for a correct balance between type and functionality, one seeks to eliminate – and it is not easy, because they recur – those aspects of hypertype that express themselves in excessive loose skin all over the body and consequently in movement faults. And let us not forget the genetic health problems whose inheritance adversely affects the lifespan of our Mastini Napoletani. Serious work to control breeding stock is essential.
Those dogs that are too abundant in skin, low on leg, tending toward “zaccari” (a Neapolitan expression that describes long dogs with short forearms, which in the past were very useful in breeding to balance many bloodlines that were characterized by light bone and little type) – today they should be considered hypertypical and as such penalized at shows, even if they are useful in breeding.
What part of the standard do you think is most understood?
We could speak for hours about interpretations of the standard that are on the one hand a bit genetic and on the other contain cynological measures that do not correspond to the reality of the breed, creating confusion and differing opinions. For example, the description of body, which resulted from repeated measurements of the best and most typical dogs, is never only 10 percent longer than the height at the withers: One could safely think of approaching a doubling of this measurement. Another aspect is that of the quantity and quality of the skin, which defines type. If the judge is carried away by too much tolerance of abundance of dewlap, of loose skin on the body, he in fact betrays an important principle of selection. Because that defect is fundamentally related to abnormal hormone levels.
What is ideal Mastino temperament?
We have to consider this question in two parts: What was the character of the Mastino Napoletano, and what is it today? In the past the Mastino Napoletano was a dog who was very loyal to his family but very aggressive toward strangers and other dogs that he did not want in his territory. Conversely, today the Mastino Napoletano is a dog with very little reactivity, always still very affectionate to those in his circle, but excessively disinterested in his surroundings. I believe this is a result of selecting for temperaments that will not cause problems with authorities. Personally, I think it would be very desirable to introduce a test to adequately verify mental characteristics together with competitions of pure adherence to a morphological standard. I won’t return to the age-old question about the differences in character between dogs that guard and those that defend: The symbiotic relationship between dog and owner does not admit differences in this respect.
Who is your favorite dog of your breeding?
It has been a while since I have bred Mastini, but among the many I believe to have preferred an exceptional bitch named Itaca della Correzzana, who had correct balance between type and functionality. 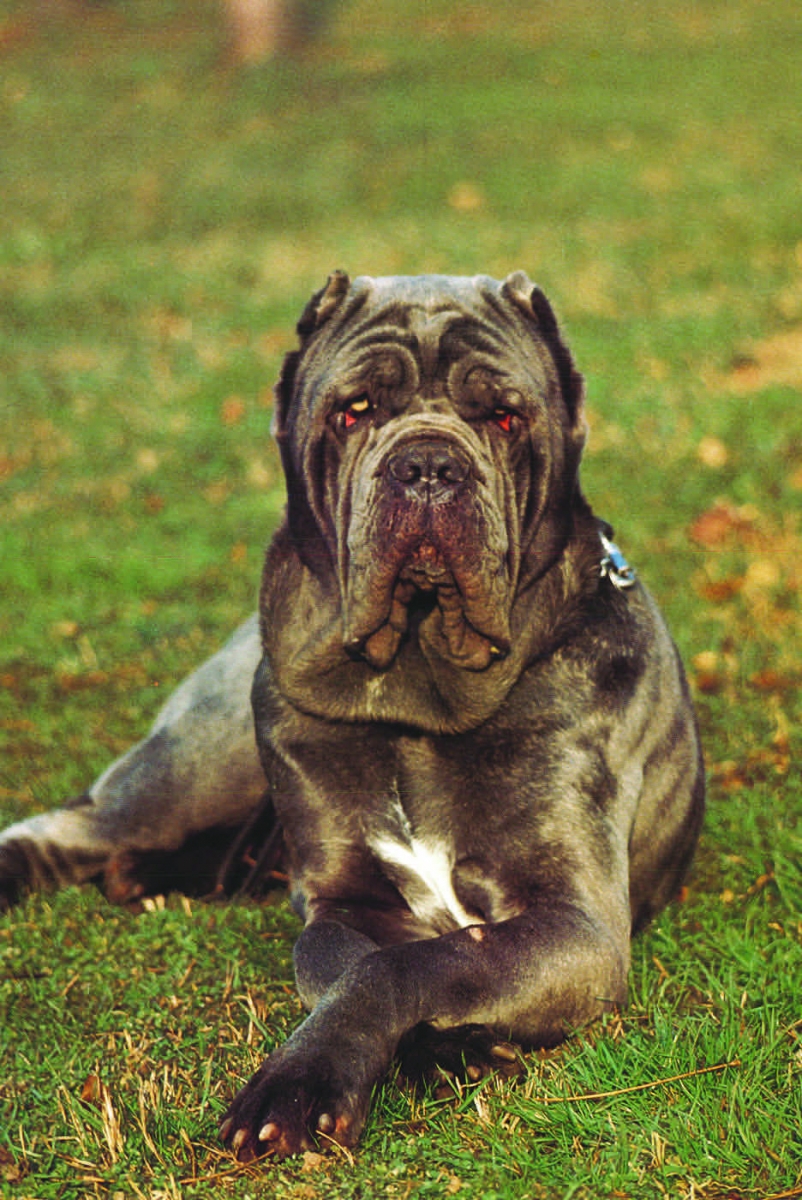 Itaca della Correzzana.
What about a favourite dog not of your breeding?
There have been many Mastini Napoletani that I wished I would have bred or owned. If I could have one of them come to life again, I would ask the genie in Aladdin’s lamp to have me find on my return home tonight Hatrim della Grotta Azzurra, but here the opinions of others would surely differ. 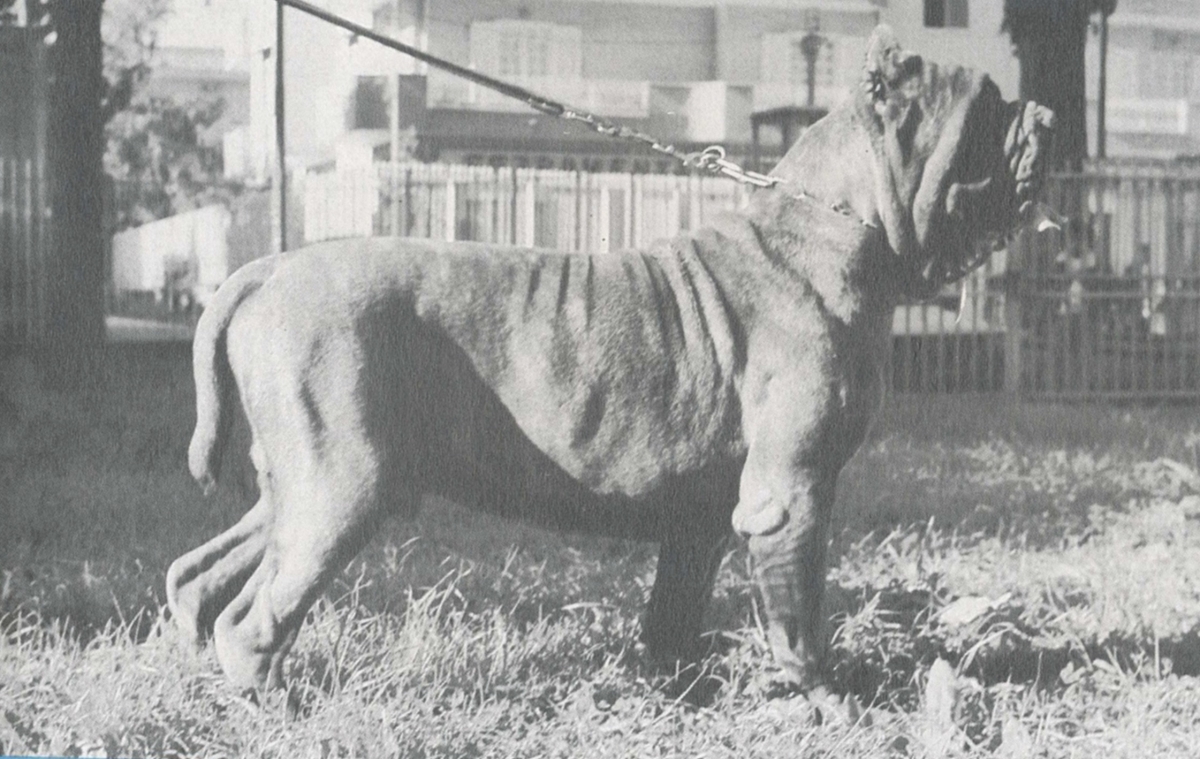 Hatrim della Grotta Azzurra. Photo credit: "Il Mastino Napoletano" by Guido Vandoni, 1992.
Can you tell us about the state of Mastini in various part of the world?
There are many countries where one finds good breeding of Mastini Napoletani. Other than Italy, in Europe I would mention some Eastern European countries, such as Russia, the former Yugoslavia and Hungary. In Western Europe, Spain has recently produced the 2009 World Champion. In South America, I will mention Brazil, Argentina and Venezuela, but also in smaller measure Peru and Bolivia. In North America, there is Mexico and the United States. Certainly, however, the representation in individual counties is too often linked to the presence of a single breeder and not to a fertile milieu of many impassioned fanciers.
What country is doing the best job of maintaining correct type?
One cannot speak of countries, but of the individual breeders located in the countries mentioned above. Certainly when there is a breed club that is efficient, organized and capable of generating enthusiasm, rivalry is suppressed. If that club is authoritative in giving guidelines for breeding and section, that country will benefit and produce positive results.
What error do Mastino judges make most often?
In my opinion, it is to allow themselves to be fascinated by certain characteristics of hypertype, and therefore address their selection in a questionable way. 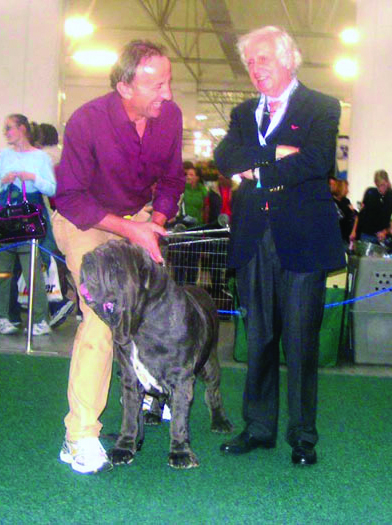 At the 2009 World Show in Bratislava with Best Bitch, Ambra del Gheno.
What error do breeders make most often?
Here the answer is more controversial. Many people breed. Few people breed well – indeed, very few are enlightened by a divine inspiration, I would say. I still feel that greater attention to selection on movement is crucial. In the past the beauty of the head was searched for too much, resulting in beautiful dogs that often were almost immobile – monuments. Today I think things are getting better.
What aspect of Mastino conformation is most difficult for judges to understand?
I think that the characteristics that are most important to grasp are, on the one hand, head type, which is understood as the perfecting of the two cubes (that of the cranium and that of the muzzle) in harmonic balance with each other, and with the correct design of wrinkles, and on the other hand, the overall balance of the body. I don’t know if these points are too difficult to comprehend, but certainly mistakes in these areas are frequently seen.
Do you have a favorite anecdote about the breed?
I am part of the world of the Mastino Napoletano, even if, as I said earlier, I am not anymore, with much regret. It was too long not to have a variety of very rich memories. It would take an entire weekend to tell them all.
Simply, I would like to go back to my first encounter with the Mastino Napoletano. When I presented myself as a young recruit in military uniform to that breeder I mentioned, like a novice dog person I asked all kinds of banal questions: How much does the dog weigh, is he good, is he bad, how much does he eat and what does he eat …?
At this final question, the unlucky man frowned and responded in a thick Neapolitan dialect: “A pizza!” To my surprise and perplexity, he showed me a bag containing the pizza crusts that he had recovered from a nearby pizzeria. That is how in those years the Mastini Napoletani that went on to be the breed’s founders were reared: Pizza at best, and the truly fortunate, chicken wings.
© Modern Molosser Magazine. This article may not be reposted, reprinted, rewritten, excerpted or otherwise duplicated in any medium without the express written permission of the publisher.
Wed, 03/31/2010 - 12:14am