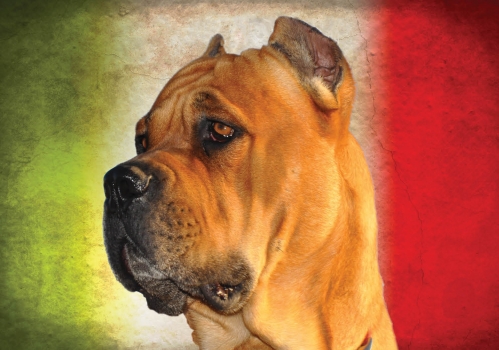 How to Speak Cane Corso (and Mastino, too)

Italy’s two Molosser breeds, the Cane Corso and Mastino Napoletano, attract legions of fanciers the world over. But some of those amatori, especially in English-speaking countries, have difficulty understanding and pronouncing various Italian words associated with their newfound breeds. Some even have difficulty articulating parts of the breed name itself. Which is, let’s face it, a bit of an embarrassing problem.

Fear not. We’ve got your back, linguistically at least. Just read (and listen to) our guide to correctly pronouncing and understanding breed-specific Italian terms, and you’ll never feel like a schemo again.

• Pronounce every letter. Unlike English, Italian does not have silent letters or other sneaky pronunciation rules. Basically, it’s WYSIWYG: What you see if what you get.

Cane Corso is a case in point. Some newbies assume the “e” in that first word is silent, as it would be in English, and so they pronounce it the same way they would the “cane” in “candy cane.” No, never. We don’t want you trying that in public.

Now that you know that you have to pronounce the “e,” you have to be sure to pronounce it correctly. English speakers find lots of ways to butcher words like Cane: Some say “kan-EE,” pronouncing the “e” as a long vowel, like “easy.” Wrong. Some try an “ay” sound, like the final syllable in Kanye West. Nope, not right either.

Here is how to pronounce Cane Corso correctly:

The “e” in Cane is a short “e” sound. We don’t have many words in English that end with that sound, but we have plenty that begin with it, such as “ever” or “end.” So, it’s more like “kan-EH.”  Here's an audio lesson:

• Don’t be so “S” happy. In English, when we want to make something plural, we just tack an “s” on to the end of the word. One dog becomes two dogs. (It works with dogues, too!)   But in Italian, things are a bit more complicated. Unlike in English, Italian nouns are assigned a gender: They are either masculine, which usually ending in an “o,” though there are exceptions) or feminine (usually ending in an “a”). When you make a noun plural, you replace that last letter: If it is a masculine “o,” you substitute an “i.” And if it is a feminine “a,” you replace that with an “e.”

When you replace the “o” at the end of both words, it becomes mastini napoletani.

It you just want to refer to more than one dog using the shortened name mastino, then the plural is mastini. As in: “You have some beautiful mastini.” (If you have trouble remembering this, think “martini,” and just swap out the “r” with an “s.”)

A breeder of a Neapolitan Mastiff is called a mastinaro.

And so now you know that a group of them should be referred to as mastinari  – not mastinaros!

(This has nothing to do with Molossers, but please try to remember this rule when you go to an Italian deli and order a panini. It’s either one panino, or multiple panini.)

With the Cane Corso, even though “Cane” doesn’t end in an “o,” it is a masculine noun, so the same rule applies, and the end result is Cani Corsi.

• Learn breed-specific terms.In both the Cane Corso and Mastino Napoletano, head type is very important. A dizzying amount of detail is given to the various planes and angles that delineate the head (not coincidentally, from each other). Mastino fanciers need to know that a giogaia  isn’t the sound you make when you gargle: It’s a dewlap, those folds of skin at the throat that are so characteristic of the breed.

You should also know that rughe are wrinkles, another important facet of breed type.

• Get the English spelling right, too. Perhaps because of an aversion to making Anglo-centric fanciers speak another tongue, the official name of the Mastino Napoletano  in the American Kennel Club is the Neapolitan Mastiff. Though the dogs are often called “Neos” for short, take note that there is no “neo” in the word “Neapolitan.” That first “a” is forever being replaced – incorrectly – with an “o.”

© Modern Molosser Magazine. This content may not be reposted, redistributed or otherwise duplicated in any medium without the express written permission of the publisher.
Thu, 09/03/2015 - 11:33pm