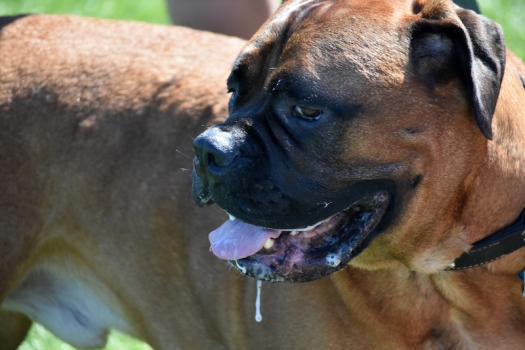 Here's how to shut off the waterworks
By
Denise Flaim

It’s a subject of constant discussion — and lamentation — among Molosser owners: What to do about all that extra, er, moisture, that these dogs produce.

After all, when you’ve got to clean up after it, drool definitely does not rule.

Here are some tips for keeping those slimy slingers at bay. 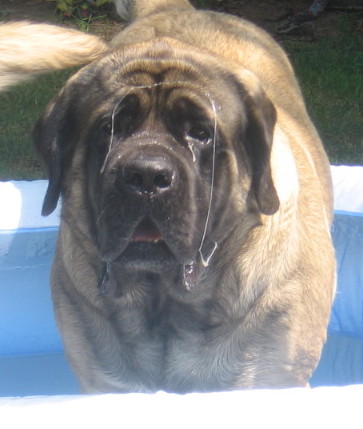 “Heat and thirst really go together,” she explains. “When a dog gets hot, it pants and salivates, caused by the need to quench its thirst and cool itself down.”

Because calm and cool Dogues drool minimally, Conway goes out of her way to keep them that way: Think “meat locker.”

“We get some very silly looks when we stop for gas in the scalding summer heat and proceed to take off our winter coats and beanies before we can begin to pump,” she laughs.

Since dinnertime is almost certain to get your Molosser’s juice flowing, many savvy owners just move feedings outside.

Outdoor water bowls are also ideal, if your lifestyle and climate permit. For indoor water stations, many Molosser owners place a shallow tray below the water bowl. (Kitty-litter boxes and boot trays work well.) There’s also a product called the Neater Feeder that has high sides to keep splatters under control. Still others prefer to keep small bath mats and even disposable carpet squares around their dog’s indoor feeding area. 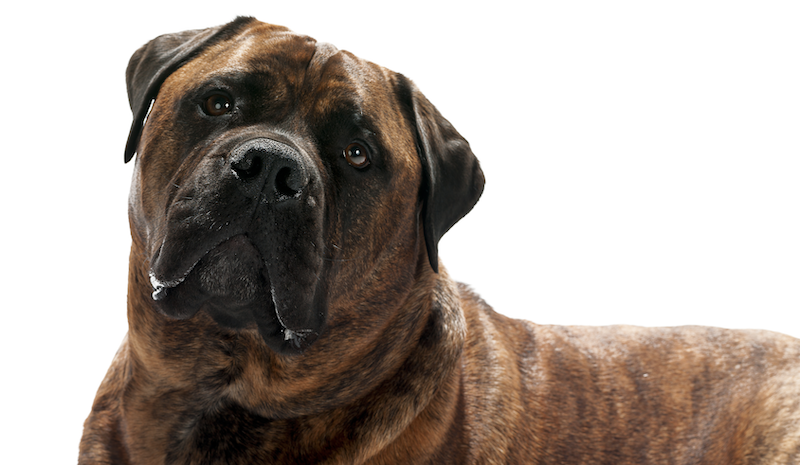 Jim Deppen of Ironwood Mastini in New Jersey says only Turkish hand towels have the thickness required for Neo drool. Garden-variety cotton towels just can’t absorb enough; they will be sopping wet after the first swipe.

Deppen buys his Turkish towels in bulk at warehouse-style stores like Sam’s Club. “Don’t even think about using microfiber,” he warns. “Water will not adhere to it.”

After drinking, Molossers benefit from having their faces wiped down. This doesn’t just stop them from becoming mobile water spigots, but in very wrinkled dogs moisture retained in the folds of the skin can lead to a sour smell, not to mention skin problems.

Helene Nietsch of Banstock Bullmastiffs in Newtown, Connecticut, keeps a bath towel next to the water bowl in her kitchen. Once the towel has mopped up enough water, she uses it to clean the tile floor.

“Add Mr. Clean, and there you have the perfect floor mop,” she says. “Usually you have four or five towels per day — pop them in the washer, and you have another set of towels ready for the next day!” 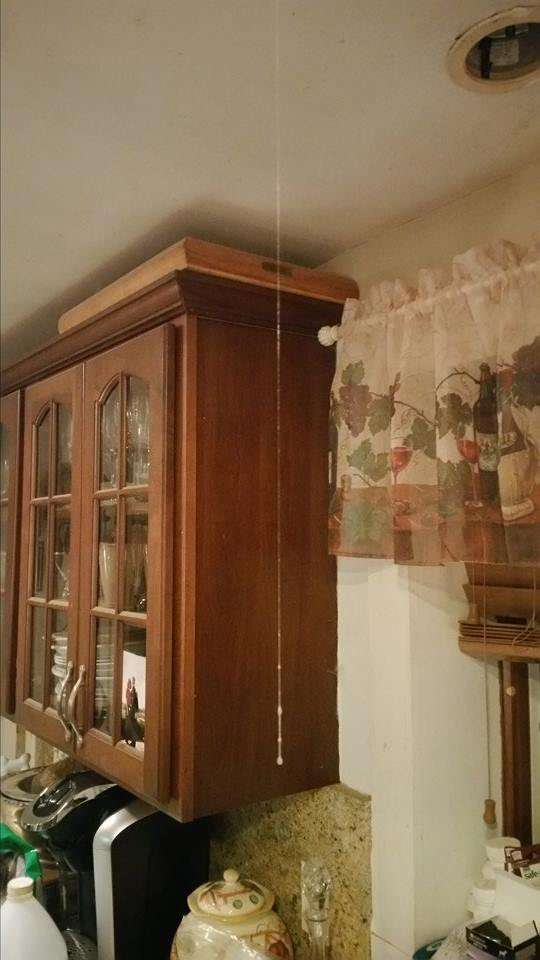 Nope, it's not a spider. Photo: Jim Deppen

Remember: They're Grossed Out, Too

Deppen notes that Neapolitan Mastiffs will refuse to drink out of a water bowl that they have slimed.

“They will starve themselves before they drink their own dirty water,” he says.

The solution is frequent water changes — three to four times a day. Though you might be tempted, do not withhold water. “I thinks it’s a precursor to bloat,” Deppen cautions. “Then they start hunting water and will bolt it down when they get it.”

Even with the most diligent precautions, it’s impossible to corner every goober: Inevitably, some will get away. Many Molosser owners swear by Mr. Clean Magic Eraser for removing slingers from walls and ceilings.

For his part, Deppen contends that Neapolitan Mastiff drool is enzymatically different from that of other breeds — “It will take the paint off a car,” like that famous soft drink, he says. If it lands on a glass table or window, he needs to use a razor blade to get it off.

Over time, saliva and other gunk can accumulate in a Molosser’s coat. Rather than fancy shampoos, Deppen uses Dawn dishwashing soap. “It gets the grease out, but doesn’t strip out the natural oils,” he explains, noting that the dishwashing liquid is also used to clean wildlife that has been compromised by oil spills.

His other must-have cleanser: Orvus livestock shampoo. Designed for bathing sheep to remove the lanolin for their wool before they are sheared, the shampoo rinses out cleanly and leaves no reside. Sold as a paste that is the consistency of coconut oil, it can be microwaved to render it into liquid form.

“Everyone in the livestock world uses it, and it gets all the nasty funk out of the Neo coat,” Deppen says. “They come out looking like Secretariat.”

© Modern Molosser Magazine. This article may not be reposted, reprinted, rewritten, excerpted or otherwise duplicated in any medium without the express written permission of the publisher.
Mon, 08/14/2017 - 11:43pm