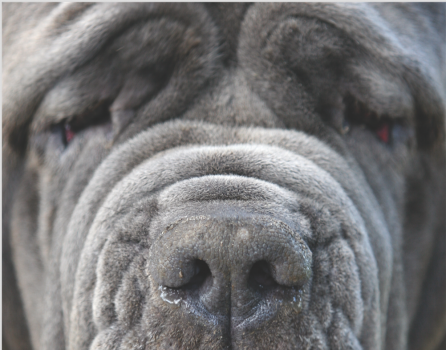 When the Neapolitan Mastiff gained full AKC recognition in 2004, fanciers were faced with the daunting job of explaining this massive Molosser to judges who didn’t have much exposure to the breed – and some of whom didn’t want it.

“Back in those days, at the morning rare-breed show under an FCI judge or a breeder-judge, you would get one lineup of dogs, and at the afternoon show on the same weekend, under a ‘regular’ AKC judge, you would often get almost the complete reverse order,” remembers Peggy Wolfe of Princeton, Kentucky, who was president of the United States Neapolitan Mastiff Club at the time.

This lack of education among some AKC judges – and their trepidation about the breed based on what they had heard of its alleged temperament – was only one part of the problem. Mastino fanciers were worried that the AKC show ring’s obsession with tremendous reach and drive and effortless movement would morph the Neo into something more refined, elegant and profoundly incorrect – the “American-style” Neapolitan Mastiff.

Enter “WHaM.” A catchy acronym that stands for “wrinkles, head and mass,” it neatly summed up some of the most important points of Neapolitan Mastiff type. “WHaM” was coined by Wolfe after the late judge Dr. Theo Kjellstrom told her the breed needed “a hook,” a one-sentence phrase that judges could easily remember and discuss ringside.

But today, some Neo fanciers are questioning whether “WHaM” has run its course, and whether that handful of letters fails to convey the “big picture” of the breed – at the expense of functionality and soundness.

Sharon Costello of Stewartsville, New Jersey, who chairs the judges education committee of the United States Neapolitan Mastiff Club, concurs that “WHaM” was put into place to prevent the Neo from “instantly evaporating into a slimmer, trimmer style dog, like the Cane Corso.” Thankfully, that didn’t happen. But instead – like that old Ann Landers dictum, “Be careful what you wish for – you just might get it” – she says “WHaM” took the breed in the opposite direction.

“There were many judges back in 2004, when the Neo made its grand entrance into AKC headlights, that were less than happy to be judging this – in their opinion – big, sloppy, poor-moving dinosaur of a dog,” Costello remembers. “I personally listened to comments like ‘Just pick the one with the biggest, sloppiest head.’ Or, ‘They really don’t have to move – just look for the one with the most wrinkles.’ The best one was made by a very well-known judge when I stopped near her chair in a Group ring. She looked at the male I was handling and said, ‘How come that one doesn’t look like it is ready for the glue factory?’”

What “WHaM” fails to convey, Costello says, is that “there is a whole dog to be judged, not just a head. ‘WHaM’ unfortunately does not speak about balance and harmony – two things a Neapolitan Mastiff should have when discussing type.”

Jim Deppen of Ironwood Mastini in Columbia, New Jersey, notes that while “WHaM” did give judges a Cliff Notes understanding of the breed, its shortcomings were soon obvious. And today, he’d like to see it go the way of the short-lived British pop-music duo of the same name. (“Wake me up before you go-go,” he croons in his best George Michael imitation.)

“Those mastinari who are dedicated conservators of the breed came to quickly resent this branding,” he says. “First, there is no quantitative value or measure associated with how much wrinkle. What size should the head be in relationship to the body? And, finally, where does the mass come from? More wrinkle is better? A big, sloppy, unsound-moving beast is what characterizes ‘WHaM.’”

Another drawback to “WHaM,” he says, is that it does not take into consideration the adolescent Neapolitan Mastiff, which should not have fully developed wrinkle, head or mass at such a young age.

For her part, Wolfe says that “WHaM” was not only “easy, memorable, and, yes, cute,” but it provided a positive channel for the “ugh” feeling some judges had when seeing their first Mastino. “We started encouraging the word ‘WHaM!’ as a better way to express that initial emotion, and things began to change,” she says. “The use of ‘WHaM’ made judges chuckle, but it also allowed them to be curious about the breed. And curiosity allowed them to listen, and then to discuss, and finally, through their own discussions, to learn.” “WHaM” often does not apply to juvenile Neos, who will acquire these important aspects of breed type only on maturity.
Rita Biddle of Eagle, Michigan, who has judged the USNMC national specialty and has worked with the club since before the breed was recognized, says she doesn’t think “WHaM” has promoted unsound or overdone dogs. “Nevertheless, it must be used in context with the other things that are important to comprehending what makes a Neo a Neo,” she says. “A Neo still has to move, and the standard is quite detailed in describing the desired movement” – slow and lumbering, with a long, powerful and elastic stride and characteristic roll.
“When I see a Neo that has ‘WHaM,’ along with that strong, big cat-like movement with long and elastic strides coming from a long push from the rear and matching extension in the front, my heart pounds and a smile comes over my face, as I know I am witnessing something wonderful, both standing and moving,” Biddle concludes. “The whole package is awe inspiring .  Such a Neo takes my breath away.”
The bottom line, says Biddle: “‘WHaM’ and good Neo movement are not mutually exclusive concepts.”
Some fanciers have suggested that “WHaM” needs some updating, perhaps adding an additional “M” to stand for “movement.” Wolfe says she didn’t include a double “M” in the initial acronym because she believed movement was derived from two other fundamental aspects of breed type already contained in “WHaM”: the essential massiveness and the looseness of the connective tissue, or wrinkle. “If you don’t fully have these two characteristics,” she says, “you will see a more normal-looking movement, still powerful and impressive, but not so much typically slow and lumbering.”
Wolfe says she has heard of lobbying for an extra “M” in “WHaM” that instead stands for “music,” to underscore the importance of harmony in the breed. She notes that when Molosser specialist Rafael Malo Alcrudo of Spain judged the prestigious Italian-based ATIMANA show in 2000, “he mentioned to the crowd that watching a Mastino was like listening to a symphony – everything should be harmonious.  In his verbal critique of individual animals he would talk about a dog as ‘having a lot of music.’”
Donna Welty of Vienna, N.J., the AKC breed columnist for the Neapolitan Mastiff, thinks “WHaM” has outgrown its usefulness, and has even struck a few discordant notes of its own by actually limiting judges’ education on the breed. “‘Why read a standard when “WHaM” says it all?’ appears to be overall attitude expressed,” she says. “Overdone type and mass are glorified by ‘WHaM.’”
Given the current talk within the breed about striving for a more balanced, athletic dog, she proposes this amendment if the acronym must stay: Make it “WHaM BAM,” where “B” stands for balance of the overall dog, “A” is for athleticism and “M” is for movement.
Whether judges’ education for the Neapolitan Mastiff involves alphabet soup or not, what everyone on both sides of the debate can agree on is this: The Neapolitan Mastiff must be a massive dog with an imposing head and breed-defining wrinkle, but it also must be sound, balanced and able to move with its characteristic leonine gait. No matter how you shorthand it, that is the name of the game.
© Modern Molosser Magazine. This article may not be reposted, reprinted, rewritten, excerpted or otherwise duplicated in any medium without the express written permission of the publisher.
Thu, 11/19/2015 - 1:38am