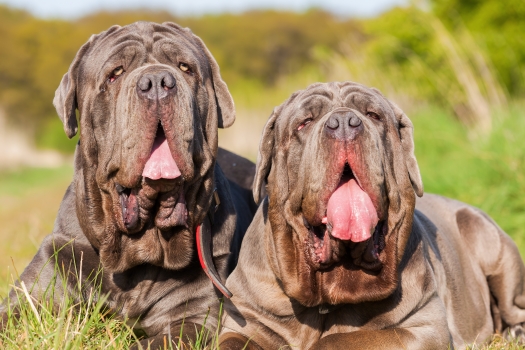 Modern Dance and the Mastino
By
Rhoda Winter Russell
"What are you doing?”
“This is not you!”
“Huh?”
These were some of the comments from friends in the world of dog shows, the fancy and AKC judging when they learned of my interest in, study of and involvement with Neapolitan Mastiffs. 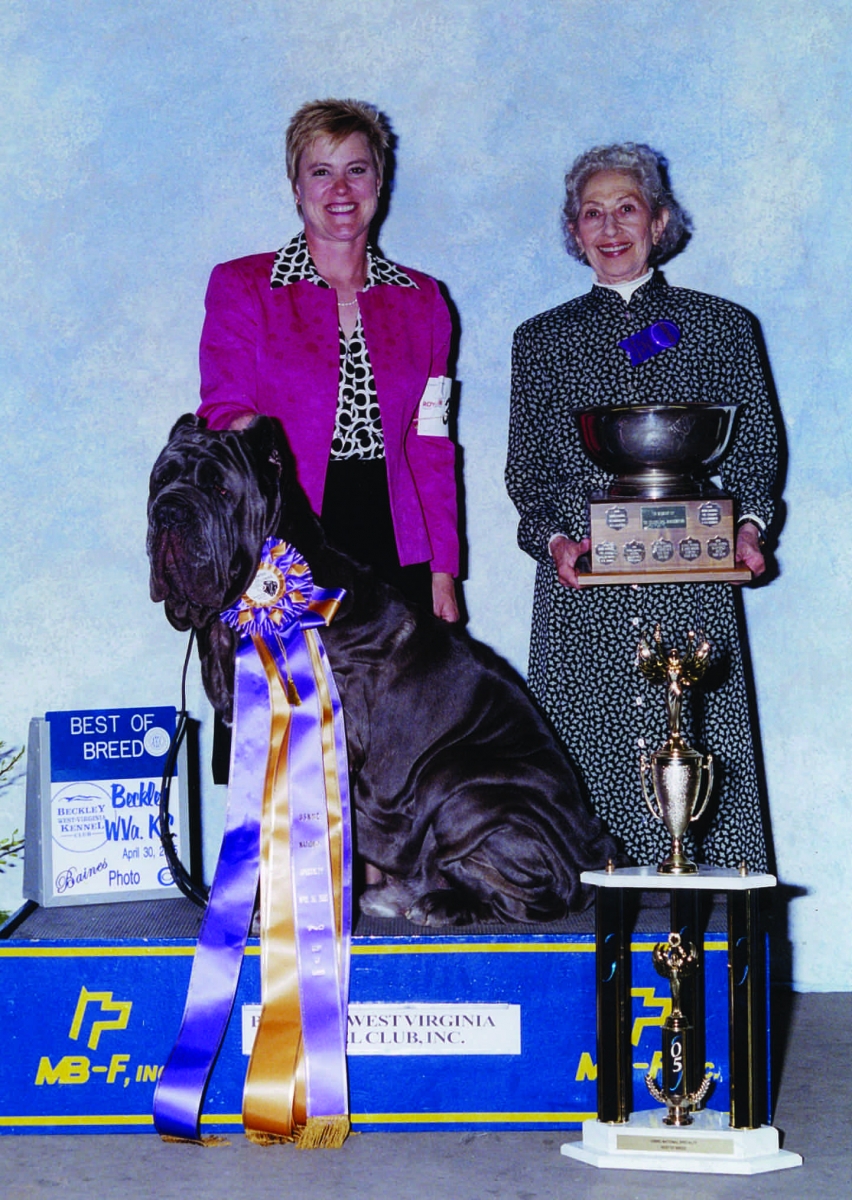 Rhoda Winter Russell awarding Best in Specialty Show to Ch. Sergio Valente of the Oaks at the first United States Neapolitan Mastiff Club AKC National Specialty on April 30, 2005. Bred by Neal McCaskell, owned by Wayne Millice and Lena Moles, and handled by Kayley Kovar, "Sergio" was the first Neo to complete his AKC championship.
Coming from my original breeds of Afghan Hounds, Salukis and Irish Wolfhounds, with a Borzoi and Greyhound co-ownership and exhibiting experience, and judging Hounds and Sporting breeds but not judging or owning any specific Working breeds, it did seem like quite a stretch. Given my careers in dance, theater, art and movement analysis, it seemed, well, far-fetched and out of character. I was assailed with “But they are so ugly!” “They can barely move,” “They slobber,” “They are scary” and “Aren’t you afraid to get near them?”
Over the years, as Neapolitan Mastiffs began to be seen and shown more often, these types of comments by judges are still out there. So perhaps I can bring a different perspective on how to view this truly unique breed. They can be much more fully appreciated … much more! 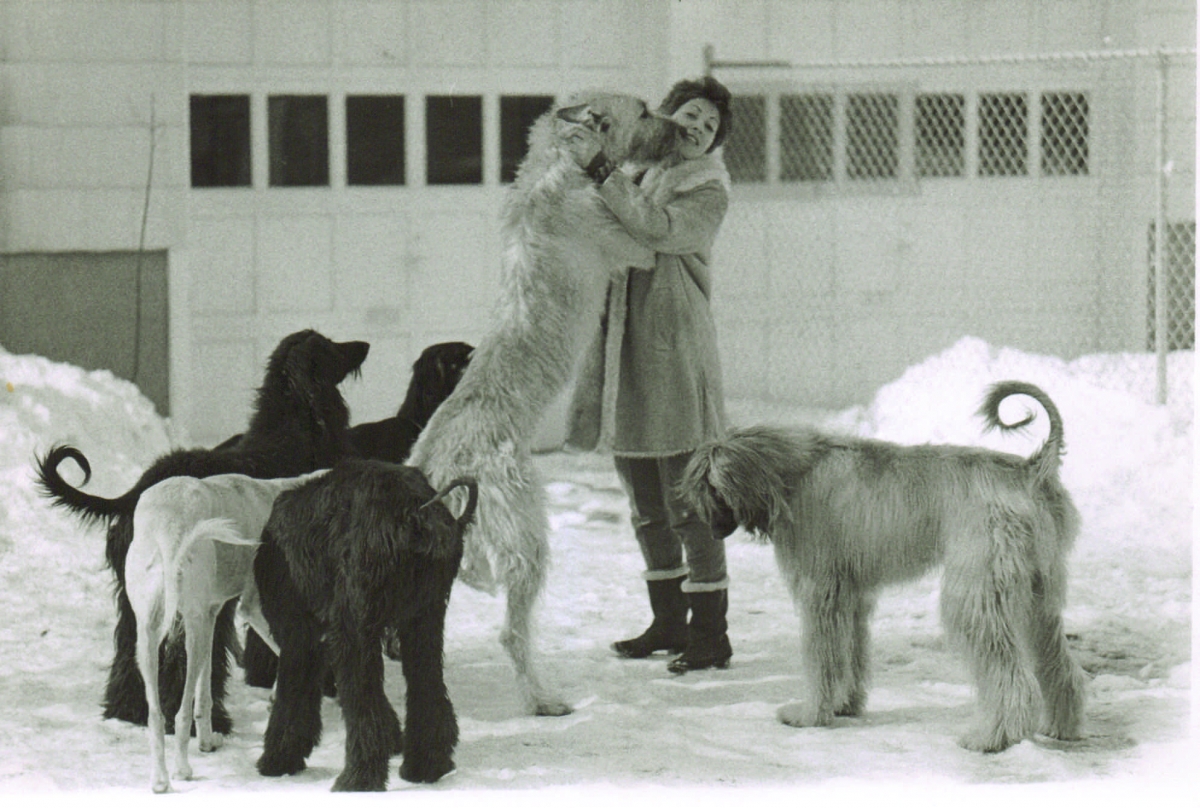 Rhoda Winter Russell with her Afghan Hounds, Salukis and Irish Wolfhound in 1969.
My first encounter with the breed was as a judge at rare-breed shows. (Sadly, these shows have literally become rare themselves, as many of these breeds have now come under the AKC umbrella.) A fellow judge from Italy explained clearly and objectively the breed history as a family guard dog whose looks were bred to astonish and take intruders aback, but who could chase if necessary. Note he said “chase.” He then explained their anatomy for quickly jumping on an intruder, even from a prone position – again, if necessary. Form really must follow function!
This all made beautiful anatomical sense, and, as a dancer, I immediately saw this as a positive. Function first and foremost to get the job done. Deter; chase if need be; and then return to guarding the home. At that show we gave a darling Neo puppy a big win, and I was hooked!
Back to ballet, which is ethereal, uplifting, defying gravity, full of many spectacular leaps and jumps and much partnering. With Sighthounds, and other breeds that hunt, many dogs partner with owners or teams to hunt, some even including boats or other animals. And so the Sighthounds, with their grace, beauty, structure, flowing lines and movement habits, in many ways parallel, and are the epitome of, la danse.
But dance has another side, or face, one in which I also had experience – what was termed “modern” dance. This approach was focused on the ground, the earth and, originally, a single dancer, alone, or sometimes with a surrounding supportive chorus of dancers as background. My study in Berlin with the greatest exponent of this focus, the German dance icon Mary Wigman, gave me another way to look at and see shapes, forms and movements in relation to gravity, the earth and ground. In addition was the use of stillness on stage, in contrast, say, to the entire body moving suddenly in any direction, and then, at times, a quietude in conclusion.
This experience, which added to an appreciation of all forms and design from what might be expected, began to open my eyes in thinking about the Neapolitan Mastiff. The parallels between that aspect of dance and this dog, who had its family around it but did its work alone, gave me a much deeper understanding and appreciation of the breed for not only what it was, but more important, what it was not. The pioneer modern soloists were viewed as strong and independent, no gimmicks or special effects – Cirque de Soleil they were not! And neither is the Neapolitan Mastiff!
So I offer this view to those currently judging the breed and to potential judges, owners and handlers: This is really a beautiful but tough, more of the earth and solo-artist type of breed. It is all functional, with every wrinkle, furrow, droop and motion carefully designed by years of breeding for total purpose, not unlike the choreography of those early- and mid-20th-Century modern dancers. Look at each exhibit as a soloist with no extraneous bells or whistles. Skin, bone, shape, expression, movement are all fused into an independent, serious, focused-on-self exhibit, doing what it was bred to do even if it breaks the mold of our more familiar and acceptable ideas and concepts of other breeds with which we have more familiarity. This is a serious dog who, while perhaps appearing bored, is to be taken seriously.
As in dance, there is a place for the long-limbed, graceful, fleet hounds, as well as those breeds that resemble more the modern approach. The Neapolitan Mastiff, with its one-of-a-kind structure and sense of self, as I see it, is this latter concept – at its extreme, perhaps, but nonetheless, a very worthy breed to judge. Approaching this breed with these ideas may, I hope, calm past reservations and concerns. And, as you make your decisions, think of each Neapolitan Mastiff taking command of center stage, alone, and holding it with great integrity and presence. 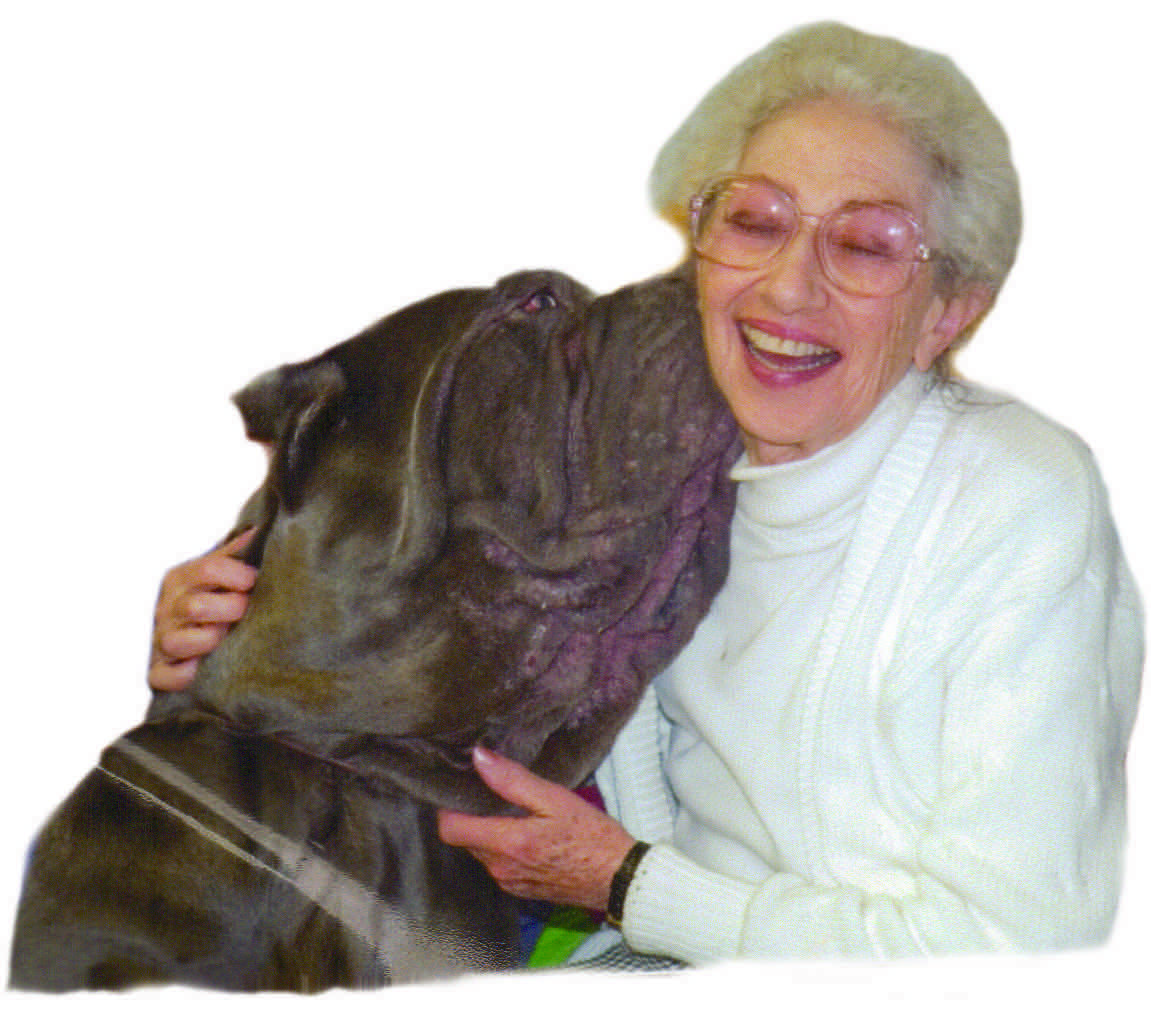 Sighthound fancier Rhoda Winter Russell of Austin, Texas, was first approved to judge at AKC shows in 1974. Her judging experience includes all-breed shows in the United States, Canada, Australia and New Zealand, and breed nationals in the U.S., including Otterhounds and Wirehaired Pointing Griffons. She judged the first AKC National for the Neapolitan Mastiff in 2005.
© Modern Molosser Magazine. This article may not be reposted, reprinted, rewritten, excerpted or otherwise duplicated in any medium without the express written permission of the publisher.
Thu, 03/29/2018 - 12:35pm