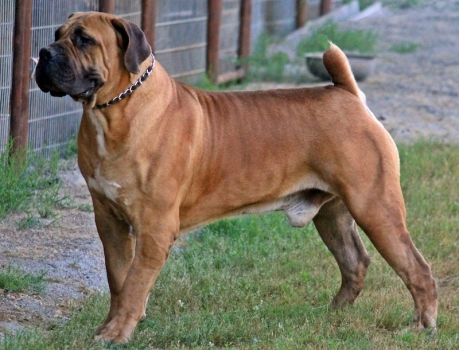 AKC-registered Boerboel must have pedigrees that pass a litmus test.

Can you get your South African-bred Boerboel registered with the American Kennel Club? It depends.
By
Denise Flaim

The first few years of American Kennel Club recognition are an exciting time for a new breed. Fanciers new and old venture into the ring (( for the first time. Historical records are made – and then often just as quickly topped. And club officers sit back with satisfaction at seeing their hard work finally come to fruition.

The American Boerboel Club, unfortunately, hasn’t had a very serene honeymoon after joining the U.S.-based registry. Not only did the Boerboel enter the American show world with type still in flux – not unusual in a function-minded breed used primarily as a working dog for much of its existence  – but a maelstrom of controversy in the breed’s country of origin has created a situation that has fractured the breed, likely irreparably.

As you can read in our in-depth coverage of the controversy, the polarization began a decade or so ago, with the introduction of black dogs into the Boerboel gene pool. Advocates of these aberrantly colored dogs – which are marketed as “rare” and fetch handsome prices overseas – have essentially taken over the management of the breed in South Africa, which permits only one organization to issue official pedigrees for export. Despite the objections of many longtime breeders and the Kennel Union of South Africa itself, as well as multiple legal challenges, the black dogs are here to stay – in South Africa, at least.

As a result, any Boerboel that has a black dog in its lineage is not issued an AKC pedigree. 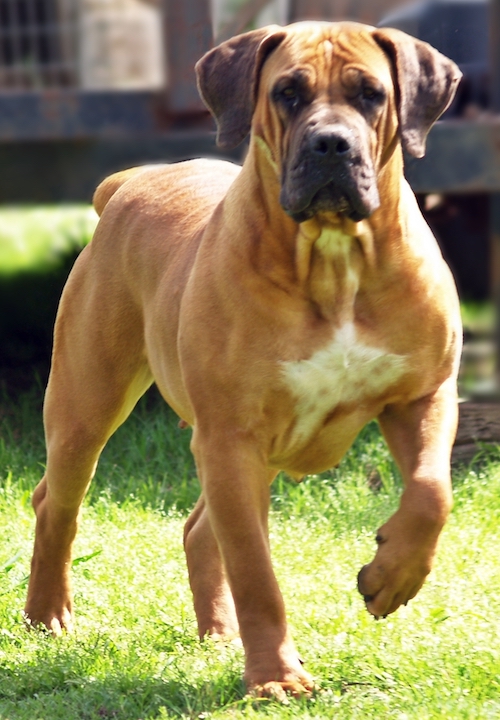 When most breeds are imported into the United States, the American Kennel Club automatically accepts a pedigree from a recognized registry or governing body, such as the Kennel Club in Great Britain or the Fédération Cynologique International, or FCI, which governs much of the non-English-speaking dog world, including South Africa. But the problem for South African-bred Boerboels is that the only entity legally permitted to issue Boerboel pedigrees – the South African Boerboel Breeders’ Society, or SABBS – is not recognized by the Kennel Union of South Africa because of its acceptance of black Boerboels. And because KUSA is the national kennel club recognized by the FCI, that means the FCI does not accept SABBS pedigrees, either. In fact, it does not even recognize the breed, as the stalemate over the black dogs stalled that process in its tracks, too.

Normally, this would create an impossible bottleneck for any breed. But the American Kennel Club stud book for the Boerboel is still open, meaning that outside, non-registered dogs can be added with the parent club’s approval.

Kerri Dale of Blue Ridge, Georgia, a founding member of the American Boerboel Club, is the person who reviews and approves all Boerboel pedigrees, checking them against databases that contain the pedigrees of all Boerboels descended from black-dog stock.

“It used to be a lot easier,” she says of the process. “Now the black dogs are getting further back into the pedigrees, so it takes some time to find them back there.”

But find them she does.

In order to submit their dog for AKC registration, owners must send the American Boerboel Club a copy of their current SABBT registration showing that the dog is registered in their name; a copy of the three-generation pedigree from that registering organization; and a DNA profile of the dog as well as a photograph.

The registration fee for non-members of the American Boerboel Club is $100 per dog; club members of less than two years are charged a discounted rate of $50 per dog.

The process of processing a pedigree can take several weeks. If a dog is deemed acceptable, then the American Boerboel Club issues a pedigree, which can in turn be sent to the American Kennel Club with the appropriate fees to formally register the dog.

The Boerboel stud book is set to close on January 1, 2020, which is the five-year anniversary of the breed’s recognition by the American Kennel Club. Dale estimates there are some 3,000 AKC-registered Boerboels to date. Whether this is an adequate number to maintain breed diversity is something the club is currently debating, as it has the opportunity to extend open registration beyond the 2020 deadline.

Dale, who can be reached at register.boerboel@gmail.com, says she is happy to consult with prospective puppy buyers to review pedigrees to determine if they will pass muster with the American Boerboel Club before they buy.

Take a moment to appreciate the irony of this situation: Because of the twists and turns of South African politics, the Boerboel is not recognized anywhere in the world but the United States, where a small American breed club is fighting a pitched battle to keep what it considers an untypical color out of the show ring and, by extension, the whelping box.

Whether they will succeed in the long term is an open question, given that the number of black dogs and their proponents will presumably increase exponentially as the years progress. But for a sliver of hope, one can contrast the Boerboel to the Fila Brasileiro, whose Brazilian breeders had a similarly divisive incursion of black dogs but were unsuccessful in keeping them out of the FCI standard. In the U.S., at least, the American Boerboel Club has kept its finger in the dyke of breed type – an apt metaphor for this native breed, which was developed by long-ago Dutch settlers in South Africa.

“Sometimes I feel like we’re salmon swimming upstream,” Dale admits. “But we decided we’re going to stick with what the founders of this breed wanted.”

And in a sport that’s all about preservation, that’s arguably worth the fight.

All photos courtesy of Amanda Viljoen.

© Modern Molosser Magazine. This article may not be reposted, reprinted, rewritten, excerpted or otherwise duplicated in any medium without the express written permission of the publisher.
Sun, 04/14/2019 - 2:40am