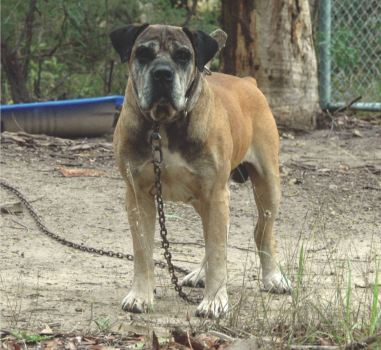 A celebration of South Africa's home-grown Molosser
By
Craig Bloom
I have been involved in breeding performance dogs for more than 20 years, mainly Australian boar-hunting dogs. The dogs scent, track, catch and hold the boar by themselves, running a couple of kilometers, often in hot conditions, before catching and physically holding the boar until the arrival of the hunter, who either catches and ties the boar live, or dispatches it with a knife.
One of my friends was interested in bringing two Great Dane males with me on one of my hunting trips, as they were originally bred to hunt wild boar – hence their original name of German Boarhound.
When we actually caught a boar, both his Danes were terrified, recoiling in horror and running away. 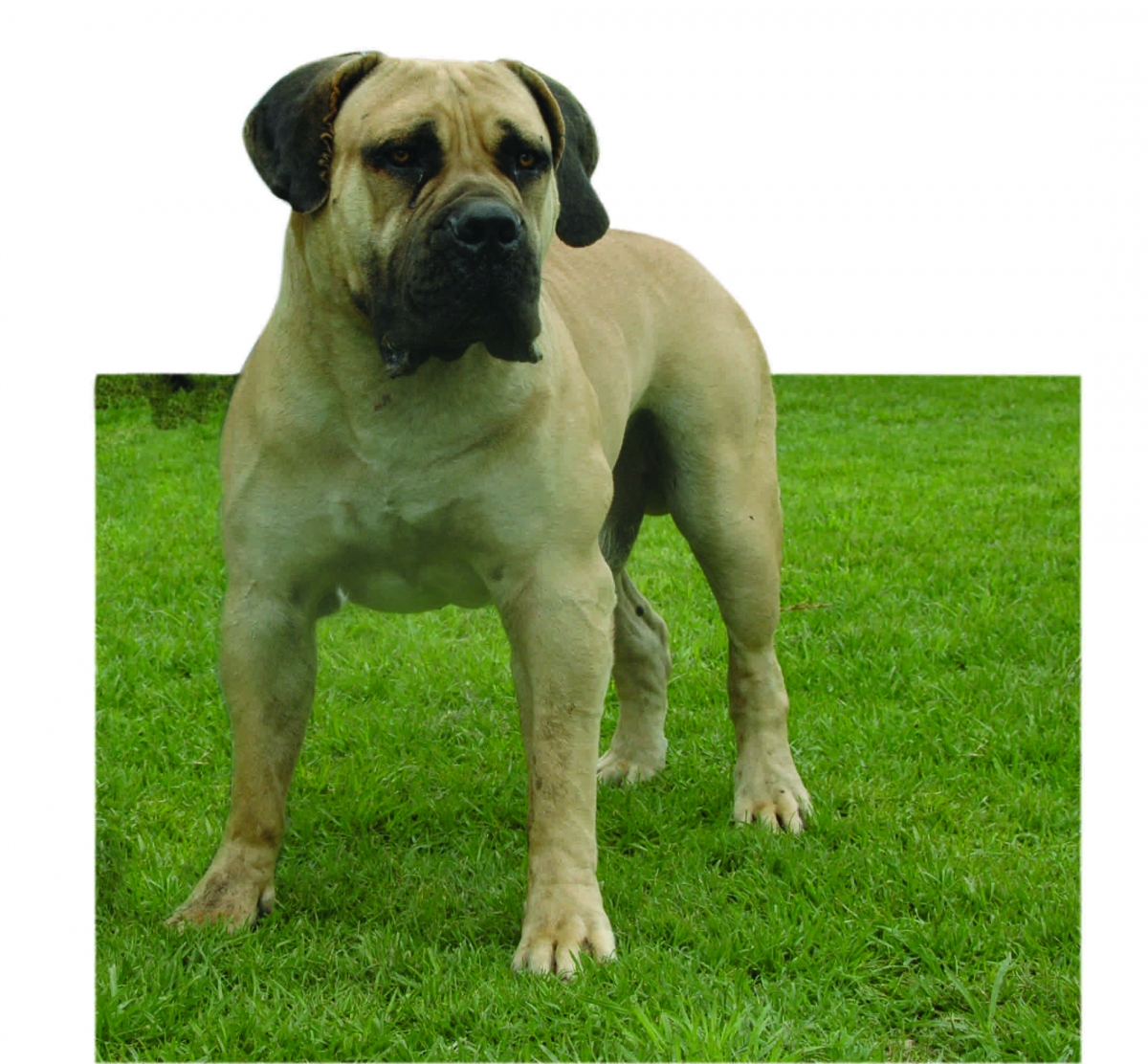 Brollocks of Spitsvuur Kennels in South Africa. A very active dog at 165 pounds (75 kg).
My friend was bitterly disappointed and could not understand how this could be. I told him to put it down to more than 100 years of show breeding, which has stripped the dogs of their instinct and function. I explained to my friend that this is the fate of most show-bred dogs. If only there was a large breed of dog that could still do its original work like the molded crossbreds that are used as my working dogs.
Soon after, I read an article on the South African Boerboel in a small rare-breed magazine. Could this really be true? Was there really such a Molosser left in the world? I had always thought such dogs extinct. Two weeks later, I was on my way to South Africa to check out the possibility: Was the Boerboel just another hollow dog, pumped up with promotional air? I was going to find out.
I was very fortunate to see some really good dogs on my first trip. The first Boerboel I ever saw was Roenard Martiens, followed by Avontuur Alfons and then his sire, Ysterberg Gogga. After viewing this trio, it was clear from their movement, posture and body language that they were in fact what they had been promoted as in the literature.
Because of my performance background, I was not interested in seeing dogs that had been kennel-bred for a number of generations. I was looking for dogs that had actually done something, or had produced dogs that had been proven in situations where the correct traits of a Boerboel were called upon and displayed. Luckily, you can still find dogs of this type in South Africa. 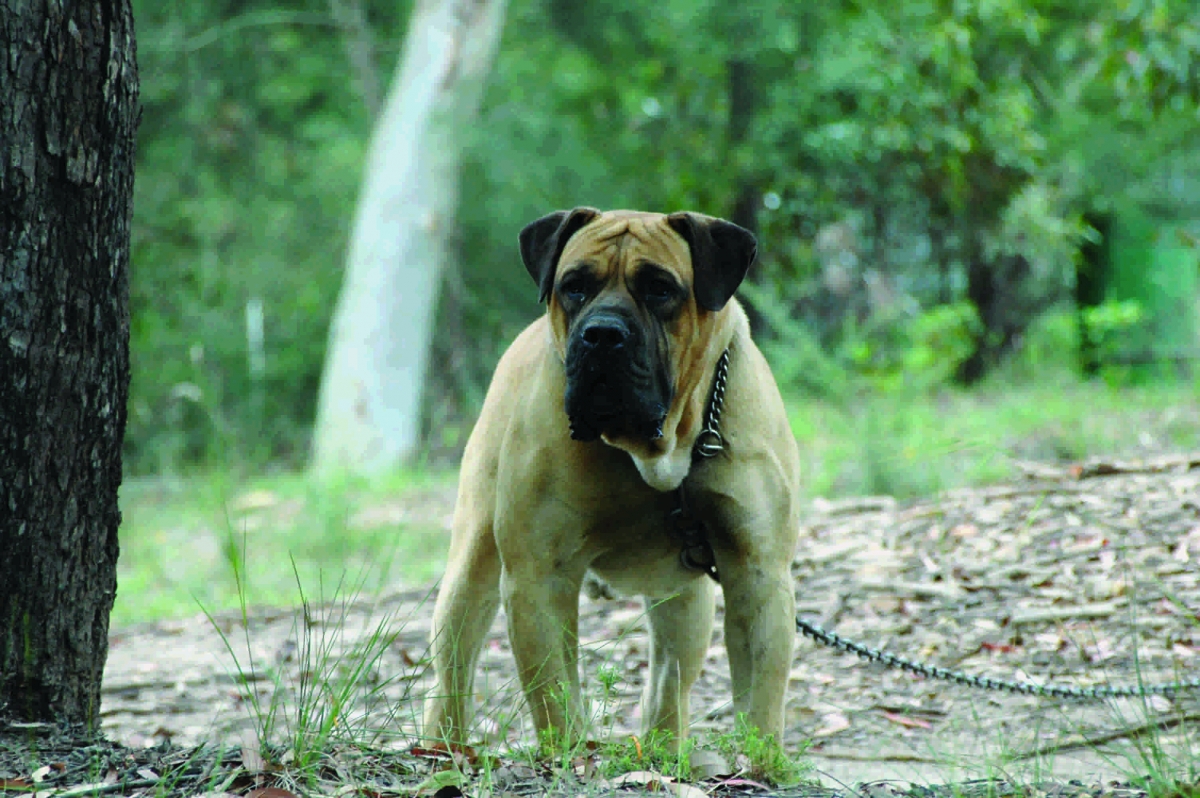 Ysterberg Sokket, pictured here at 8 years old, was a very influential dog in Australia and the United Kingdom. A working Boerboel, he was used to hunt boar, working by himself to catch and hold the boar. He was also used to track and dispatch wounded animals. He has produced many working dogs for hunting, personal-protection and herding stock, as well as many high-scoring Boerboels in the show ring

Back to the Boers

The Boerboel has an interesting history. When the Europeans first travelled to South Africa in 1652, they brought with them dogs they believed could be an asset. These dogs mostly came from the bull and bear pits of Europe – athletic, mastiff/bulldog type dogs with courage and tenacity.
Over the last 350 years, these dogs evolved with the infusion of local pariah blood and later imported dogs. The farmers and stock drivers needed many dogs to guard and help move large numbers of stock, and the dogs had to get along with each other and the domesticated beasts. Less prey drive was desirable so the dogs were not off chasing all the abundant wildlife.
Once the trekkers settled, the more desired type were not wanderers but dogs that stayed by the farmhouse and walked with the children, protecting the property and people from any threat that Africa might throw at them, including baboons, leopards and human raiders. Boerboel were walked with oxen teams while ploughing fields to deter big cats. 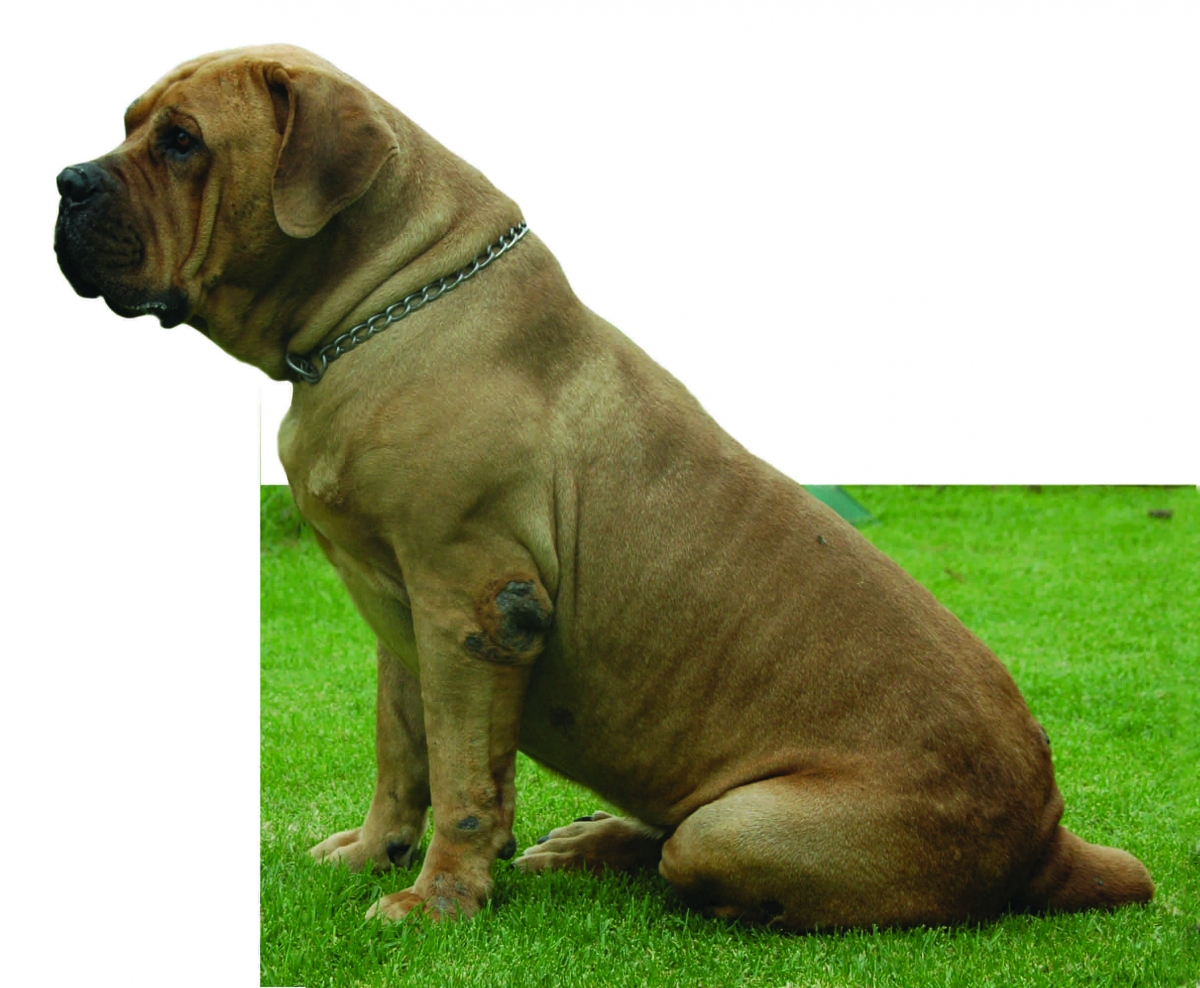 Mouzer Ysterberg Adolph, hunting bushpig in South Africa at 11 years old.
One of my friends who is a Boerboel breeder told me that over the years he has trapped 60 to 80 livestock-killing leopards. You can never catch one by more than two toes in a claw trap, so when you approach the animal to shoot it, it is wise to have a pair of Boerboel by your side. The settlers had it tough; these practical people would not feed a large dog if he did not earn his keep. I have a few individuals that eat much less than the other dogs on my yard; it is not hard to assume this was also a desired trait. The dogs had to survive without veterinary care in hard, hot conditions. Weaker animals did not prosper.
This history based on performance over broad and varied tasks tends to lead to a diversity within the breed. This is a common factor in working dogs. The same variations can be seen in working Kelpies in Australia, match weights in fighting dogs, race weights of racing greyhounds, and shapes and sizes in pig dogs. The Boerboel’s diversity came through different breeds, including the original Bulldog of the 1800s (before the Pug cross), the Bullmastiff (not the modern type, but the longer-muzzled, more driven athletes that were imported by the British for guarding the diamond mines). Some lines are believed to have infused Bull Terrier in the late 1940s and early ’50s; these dogs were also different in appearance and temperament than the modern Bull Terrier.
In the early 1980s, in an effort to recognise the Boer dog of the farms, a standard was written and agreed upon. A journey around Southern Africa was undertaken; 250 dogs were considered and 73 registered. Most of the genetics were channelled through three dogs: Lourina Mac, Donkerhoek Kaalpoort and Dopper Oubass. Few Boerboel are without one or all of these dogs in their pedigrees. 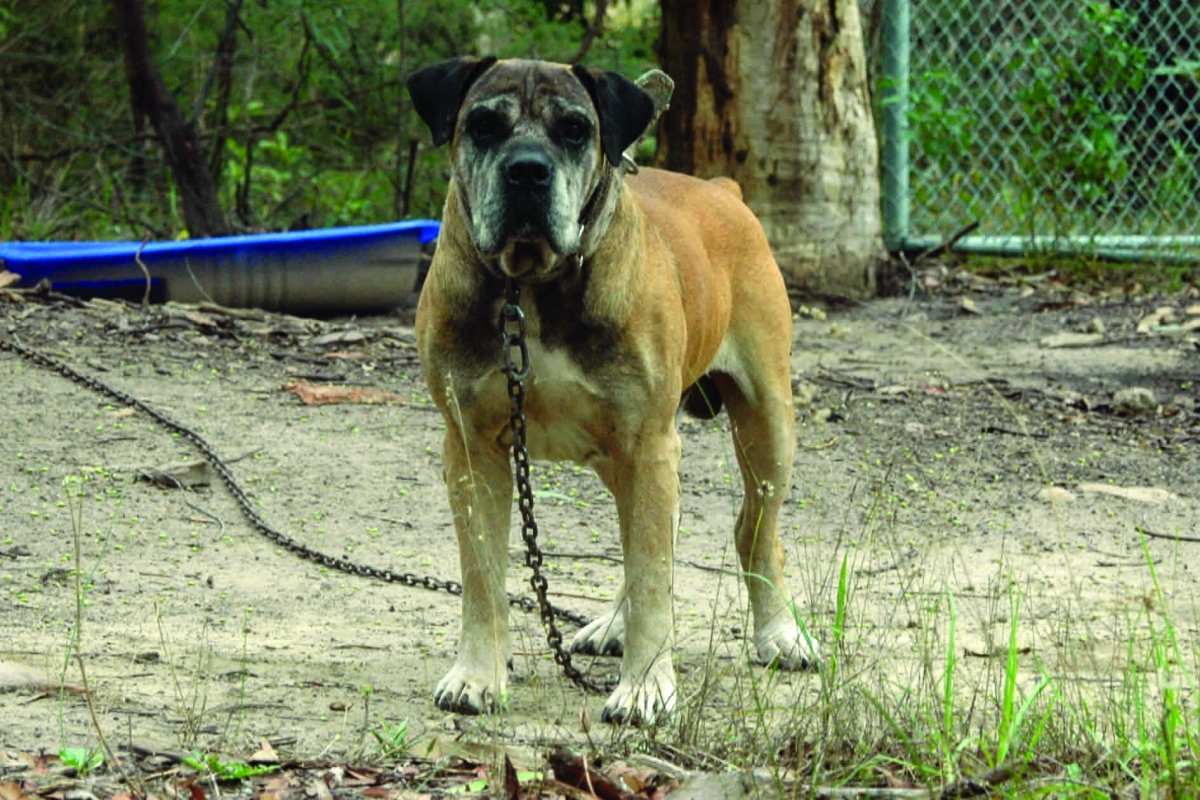 Ysterberg Laksman, just before his 13th birthday. Another influential sire, with top-quality offspring in Africa, Australia, Belgium, Netherlands, the United States and the UK.

The modern Boerboel is a powerful yet athletic dog, and still a needed working dog on many farms and homes. However, its rise in popularity in the last dozen or so years has had a detrimental effect on its working aspects: Below-par dogs are now not culled, as they can be sold for good money, usually overseas.
The Boerboel is useful at many tasks due to its influences and the way that the dog was forged. Many are decent herding dogs, good for handling touchy cows and calves, and working with stubborn stud bulls. Many can make hunting dogs. I have found that many have good noses on the ground; however, they are better at staying with the hunter, protecting him from charging or wounded animals. I have personally experienced this. Many people also use their Boerboel in personal-protection work.
Although the Boerboel is proficient at all these tasks, none of them is what he actually excels at. The Boerboel is first and foremost a protector. He excels at this due to instinct to perceive threats; he can sense the owner’s feeling toward a person or read the vibe an individual is projecting. 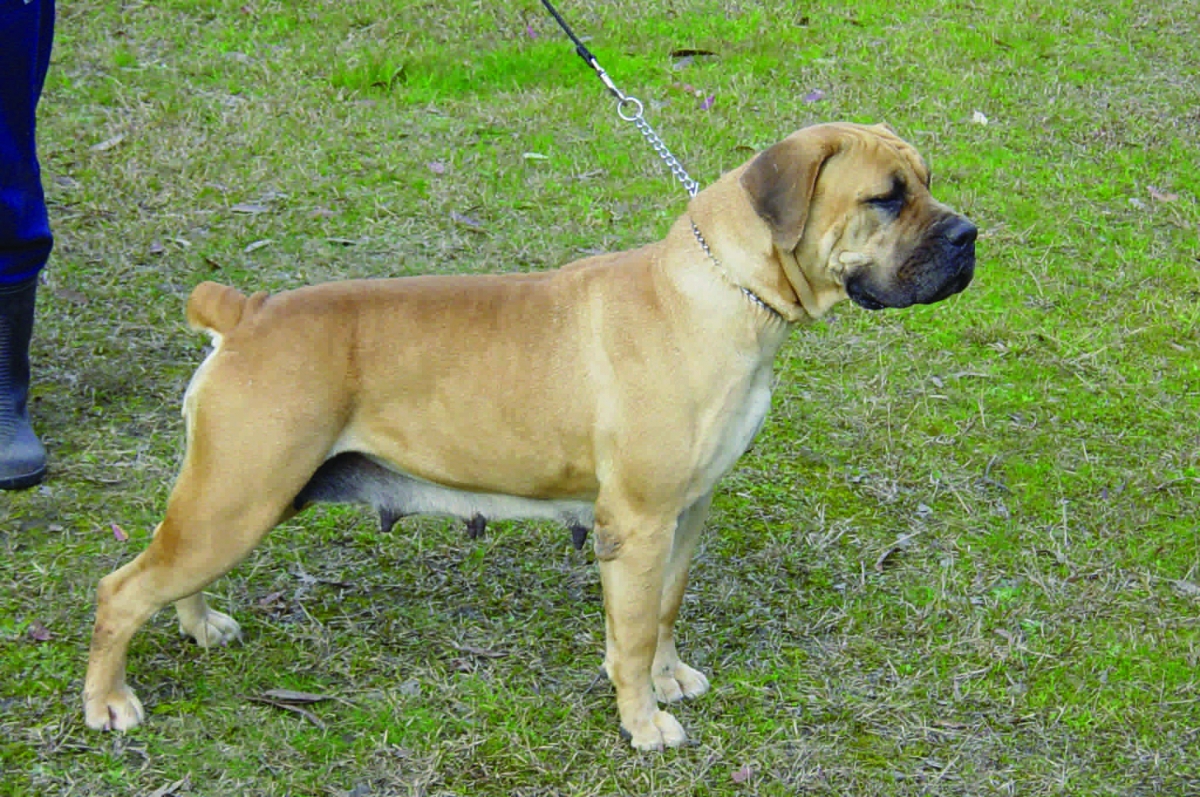 Maestro Raisa, an excellent example of a quality bitch, at about 120 pounds (54 kg). 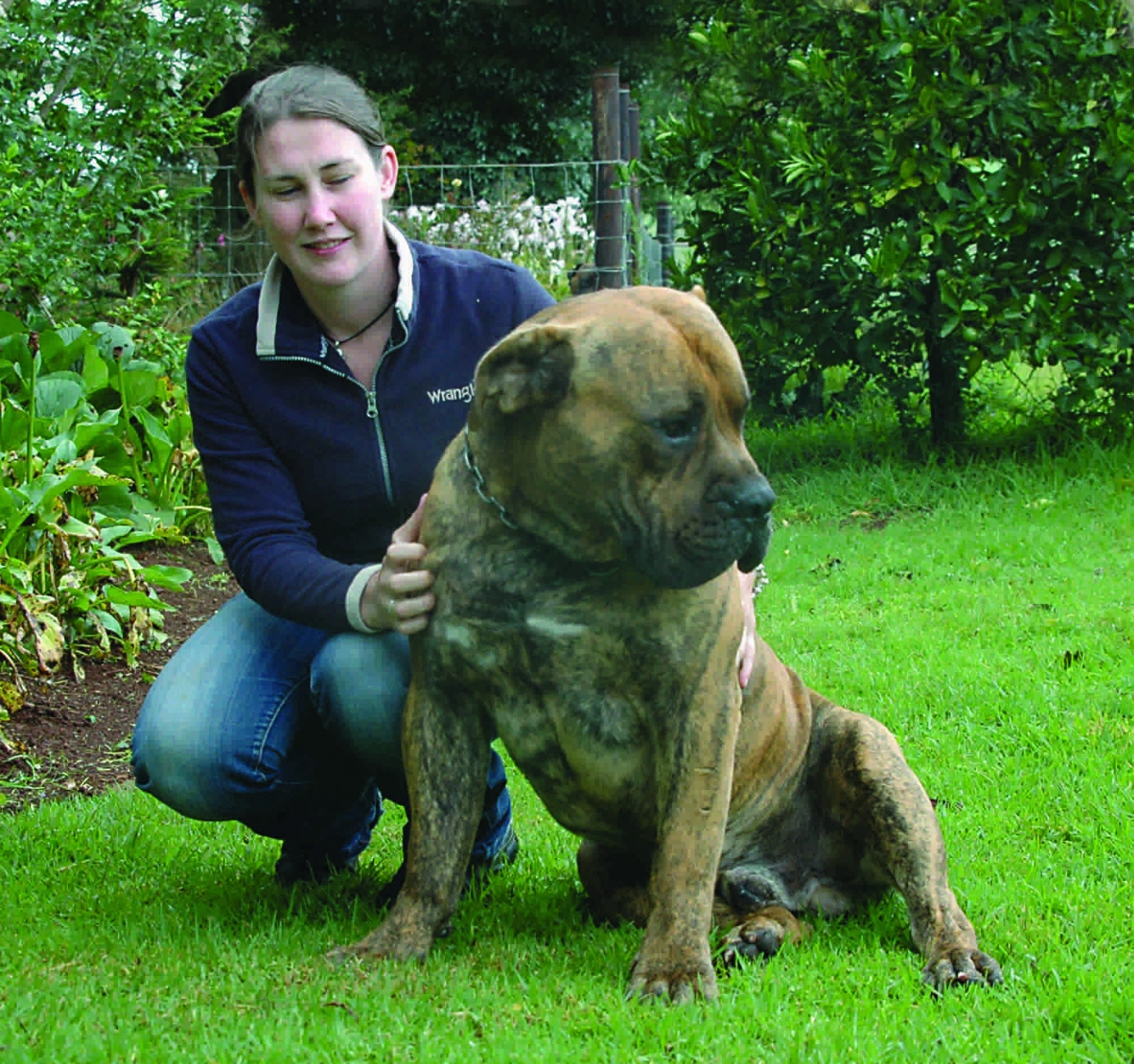 Driefontien Grootpraat at Nyamvubu Boerboel in South Africa.
The Greyhound is the fastest in the canine world, the Pitbull the gamest. The Boerboel has the most developed “threat perception instinct.” A good Boerboel will stay close to its owner, watchful without excessive barking or carrying on. I have arrived at many residences in South Africa and the Boerboel will walk up show its presence, maybe brush you as it walks by, then just move off a short way and watch.
Here is a good example of threat-perception instinct: A young woman studying at university would drop her Boerboel bitch off at a friend’s factory unit and pick her up on the way home. The workers enjoyed teasing the young woman about her guard dog, as 50 people walked by the bitch every day and she didn’t even seem to take notice. One day there was a commotion and a roar; the bitch was chasing the local druggie and thief down the driveway. She was 10 months old. He had the wrong vibe – he was looking to steal something, his intentions were picked up by the young pup and she was compelled to act. You cannot teach this to a dog; it must be in them.
The Boerboel is an imposing and capable dog. They tend to be a little hardier and longer lived than most dogs of a similar size. Bitches are usually around 50 kg (110 pounds), though I have bred them from 43 kg to 70 kg (95 to 155 pounds). Males are usually 65 kg (143 pounds), however I have bred them from 50 kg to 88 kg (110 to 194 pounds). 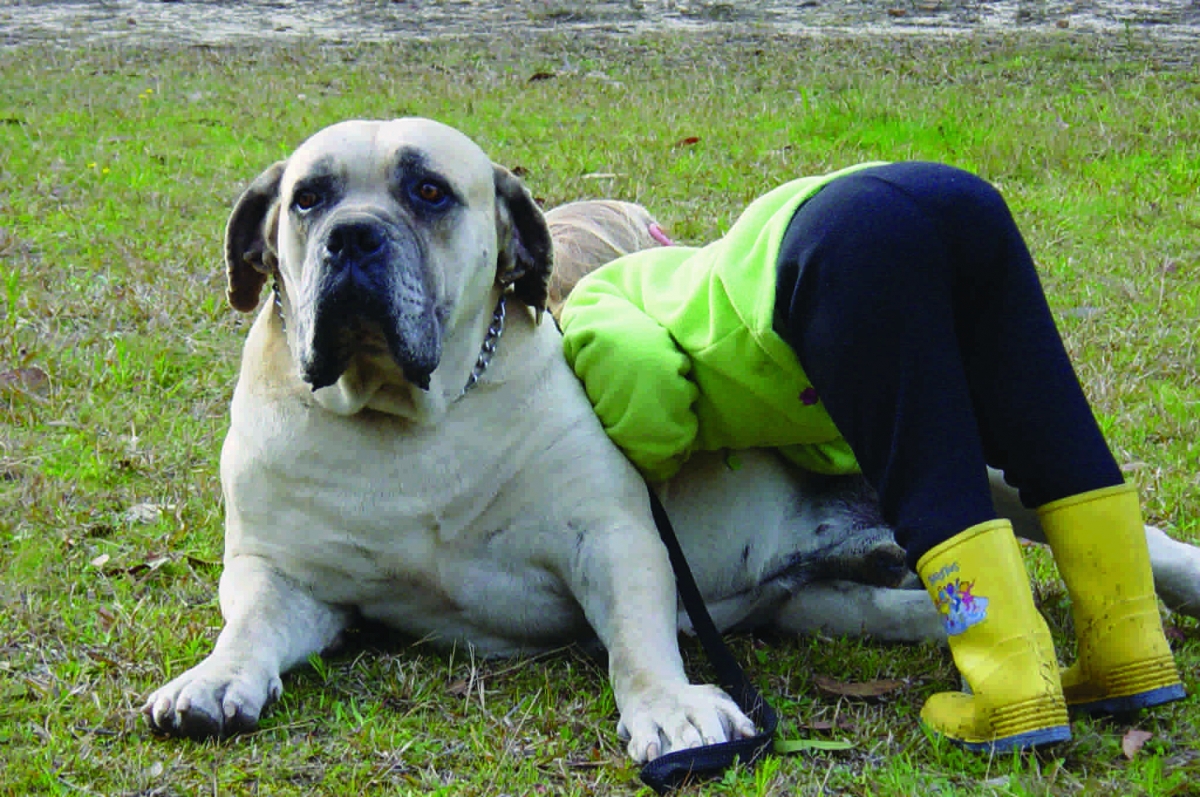 Maestro Napoleon had the correct Boerboel temperament: easygoing and calm, but confident and brave. Weighing in at 165 pounds (75 kg), he is pictured here with the author’s daughter, Chloe.
The Boerboel is one of the few large modern purebred dogs that is still actually performing its original task. A good Boerboel takes his job seriously. A dog that is nothing more than a show piece is useless in the Republic of South Africa, where there are 50 murders reported a day and crime increases every year. The Boerboel tends to be dominant, and there are a percentage of them who need strong leadership from their owners. The Boerboel is a paradox: He will throw himself in harm’s way and fight with his prodigious power, yet he will also play with and watch over young children, as on many South African farms, where the children have no one to play with other than the family Boerboel.

Craig Bloom has been breeding working Australian pigdogs for 23 years, and along with his brother is an avid and well-known pig hunter in that country. He has been involved in the Boerboel for just over 11 years, and was the first non-African to be invited to judge the National Show in 2003. He is involved in preserving the Ysterberg line of Boerboel with other breeders around the world.
© Modern Molosser Magazine. This article may not be reposted, reprinted, rewritten, excerpted or otherwise duplicated in any medium without the express written permission of the publisher.
Mon, 03/12/2018 - 6:40pm