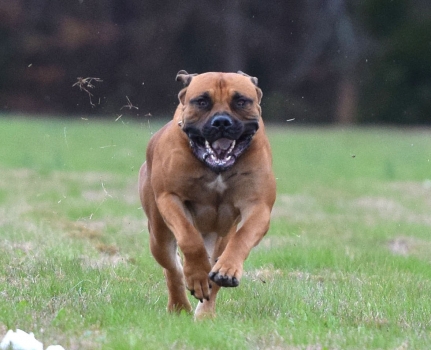 A fancier reflects on the South African mastiff’s entry into the AKC show ring
By
Eileen B. Weatherbee
I have owned and trained dogs my entire life, but it wasn’t until my first Boerboel arrived from South Africa in 2000 that I really became interested in dog shows.
In the mid-1990s, I was doing research for a family member on the Boerboel, and the more I learned about the breed, the more intrigued I became. Having had Rottweilers for many years, I thought the Boerboel sounded like the perfect dog. At that time, they were purported to be free of health issues, biddable and athletic – just what I was looking for.
When I was certain the timing was right, I began my search for a puppy, scouring the internet for breeders and joining any Boerboel chat groups I could find. This was almost twenty years ago, so technology was still lacking in many ways – there was no Facebook! Only a handful of people in the States had Boerboels, so I decided to import from South Africa.
I contacted several breeders, asking about sires and dams, health issues and previous litters. Some were responsive, while others were less than accommodating. No matter whom I spoke with, I kept coming back to an absolutely stunning male named Dopper Madala owned by Attie Badenhorst of Baden Boerboels, which is located between Johannesburg and Pretoria.
I contacted Attie, and it just so happened he had a male puppy available, by Dopper Madala out of Tessak Elaine. Attie called to speak with me about the breed and to ensure I would be a good fit for the puppy. It was then I knew I had made the right choice in a breeder. 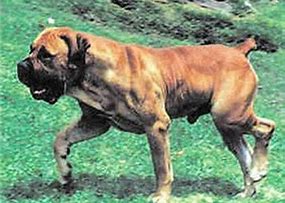 Doppler Mandala, the dog that inspired the author to acquire her first Boerboel.
We made arrangements for 13-week-old Koa’s flight. He came across the pond during a huge snowstorm, but nothing was going to prevent me from meeting this new addition! We drove four hours to Washington’s Dulles Airport after my husband finished a 24-hour shift – yes, it was a white knuckler at times, but we made it. The flight from South Africa took 24 hours, and as soon as Koa emerged from the crate, I knew immediately that I had better step up my game: He walked out like he owned the place, ready to play. I remember those huge feet and large ears with eyes like saucers staring deep into my soul.
After a quick cleanup and a potty break, we made our way back home, and it was like he had been a part of the pack forever.

A head study of Koa.
From that day on, Koa and I were pretty much inseparable. We hiked every day, and as soon as he was old enough we began obedience training at a club geared for performance events. We went everywhere together, experiencing new people, sounds and surfaces. Always the willing partner, Koa was the life of every training session. He taught me a great deal in our time together, and he got me hooked for life on Boerboels. These dogs are very smart and do best with a job. I can’t even imagine the trouble he would have gotten into if we hadn’t been exercising daily. As a guardian breed, Boerboels are not for first-time owners and require a strong pack leader.
Fast forward to 2013, when the Boerboel was still in the American Kennel Club’s Miscellaneous class, the final step before full recognition. A member of the American Boerboel Club asked if I would enter a conformation show with some of my dogs to help the Boerboel get full AKC recognition. Having always done performance events, I was a bit hesitant, but willing to give it a shot.
At that very first show, my girl Kipenzi (Darkwater Kipenzi, CM, BN, RA, RATM, HCT, CGC) took Best of Breed. I was in total shock because this was her first time out, and we had very little preparation and no experience in what to do. With an ear-to-ear grin, I decided I should give conformation showing a chance.
Kipenzi went on to become the breed’s fifth Certificate of Merit recipient. (At the time, five CM titleholders were required for a breed to achieve full AKC recognition; the number has since been increased to 10.) I learned quite a lot during our time showing in Miscellaneous – everything from what to bring to shows, how to dress for the ring, and how to move the dogs to show off their best attributes. 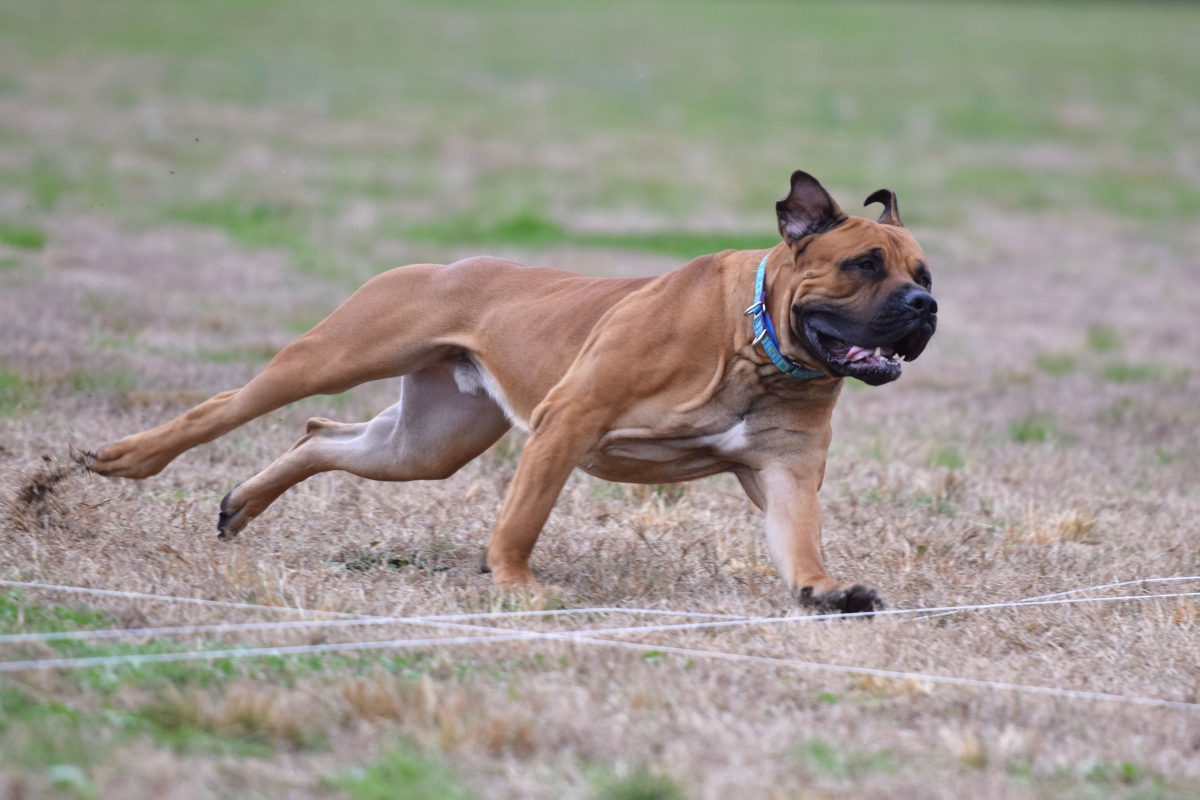 Boerboels are above all athletic Molossers. 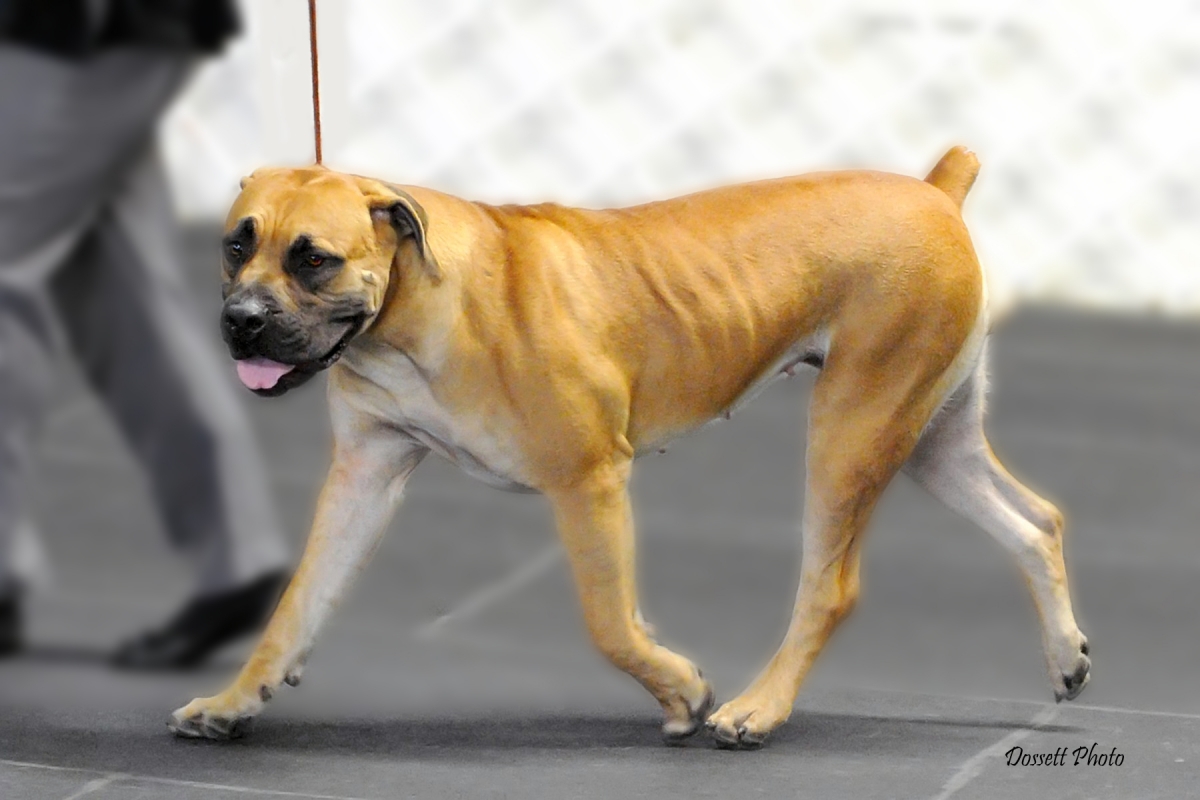 I continued to show in various venues with my Boerboels, but I waited until January 2015, when the breed became fully recognized, to come back to the conformation ring. I can remember the first show we attended after becoming “official”: Our judge was so welcoming, and after we had shown to her, she spent several minutes learning a bit more about the breed’s origin and function. I certainly understood that she couldn’t delay her judging for very long, but I appreciated the gesture of wanting to know some background on the dogs. As a new exhibitor, it gave me an added sense of responsibility and satisfaction being asked about the breed.
That first year of recognition was the most difficult: While there were many judges who expressed interest in the breed as enthusiastically as that first judge did, there were just as many had never heard of the breed, or if they did seemingly couldn’t have cared less. I have heard judges referred to the Boerboel as just a “Bullmastiff with no tail,” a “larger Cane Corso” and a dog that looks like a “Shar-Pei on steroids” – somewhat disconcerting, to put it mildly. Even now, three years after recognition, there are judges who have never laid a hand on a Boerboel, so it is a positive that more exhibitors are bringing out dogs across the country so judges are at least able to see a few here and there. At some of the larger venues, the American Boerboel Club does its best to host judges’ education.
One of the things people don’t realize is how athletic Boerboels are. For their size, they are amazingly agile. I have done tracking, barn hunt, agility, lure coursing, herding, nosework/scentwork, trick dog, obedience, rally obedience and other sports that require endurance with my Boerboels, and they are up for every challenge. There are even some Boerboels doing dock diving now, which is great fun to watch. 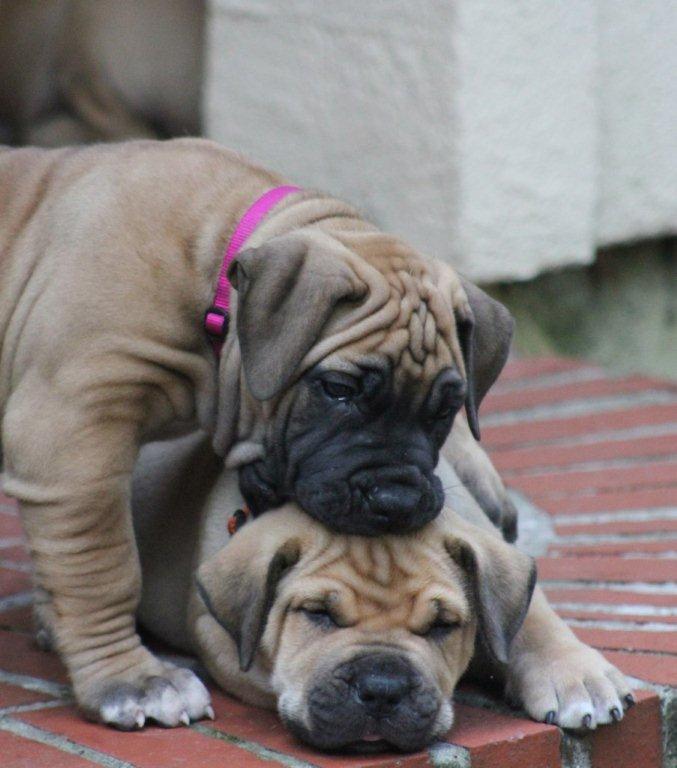 I often tell people the story of a little brindle pup I brought home and put in an exercise pen so she could safely meet the adults in the household and let me to get some chores done. No sooner had I turned around than the 3-month-old was at my heels. Thinking I must not have secured the gate properly, I returned her to the pen and checked the gate, which was still latched shut. Five minutes later, here she was again.
This time, I checked the pen from end to end to confirm there were no openings, put her back in, then snuck around the corner to watch. Yep, she was clearing the four-foot fence!
In the beginning, very few – if any – judges recognized the Boerboel if it wasn’t identified as such coming in to their ring to be judged. While I do feel people are beginning to recognize Boerboels more readily in the ring, there is still a long way to go for the Boerboel to be unmistakably identified. And I do understand a judge’s quandary when several Boerboels enter a ring and none of them look anything alike: These dogs are used for a variety of tasks in their native South Africa, which has led to a diversity of body types. This is why it is so important to be familiar with the standard. Look at the overall dog, and try not to fault-judge: If a dog has a correct head, is balanced and is a fluid mover, for example, that may be enough to let a judge forgive a topline that may not be perfectly level.
Conversely, if a dog has a disqualifying fault, take a stand and address it. The Boerboel standard is very specific on some things, one being color: There should never be a black dog in any AKC conformation ring.
As with most breeds, it is important for a dog to look like a dog and a bitch to look like a bitch. When looking at a Boerboel head, there should be no mistaking it for another breed. These are large dogs, but they are not a giant breed, and should possess fluid and balanced movement.
Temperament is huge: The standard says “aloof,” which means Boerboels should take you or leave you. Calm, stable, confident and self-assured, they should be able to distinguish a threat from the lack thereof, which means the judge should be able to examine the dog. If not, then that is grounds for excusal.
That said, one should be mindful of the Boerboel’s guardian role when approaching in the ring. As with many breeds, a lot of exaggerated movement by the judge may create a stir, and elevated voices might be concerning, as could heavy patting on the back. Inexperienced dogs might be a bit apprehensive, but they should calm down once they see there is no production being made.
Like most Molosser breeds, Boerboels do take some time to mature. The rule of thumb for females is 18 months and for males 18 to 24 months, although I have seen some dogs take up to four years to completely fill out. When they are in the show ring, it is fairly easy to spot the youngsters who haven’t yet grown in to their heads or bodies. They look like gangly teens.
While their bodies may be slower to mature, their minds are like steel traps. Without a job to do or lots of mental stimulation, Boerboels can and will become willful and destructive. But with as little as five to 10 minutes a day of structured training, Boerboels can be channeled in to great canine citizens. It greatly improves the relationship with their families and also keeps them out of trouble. 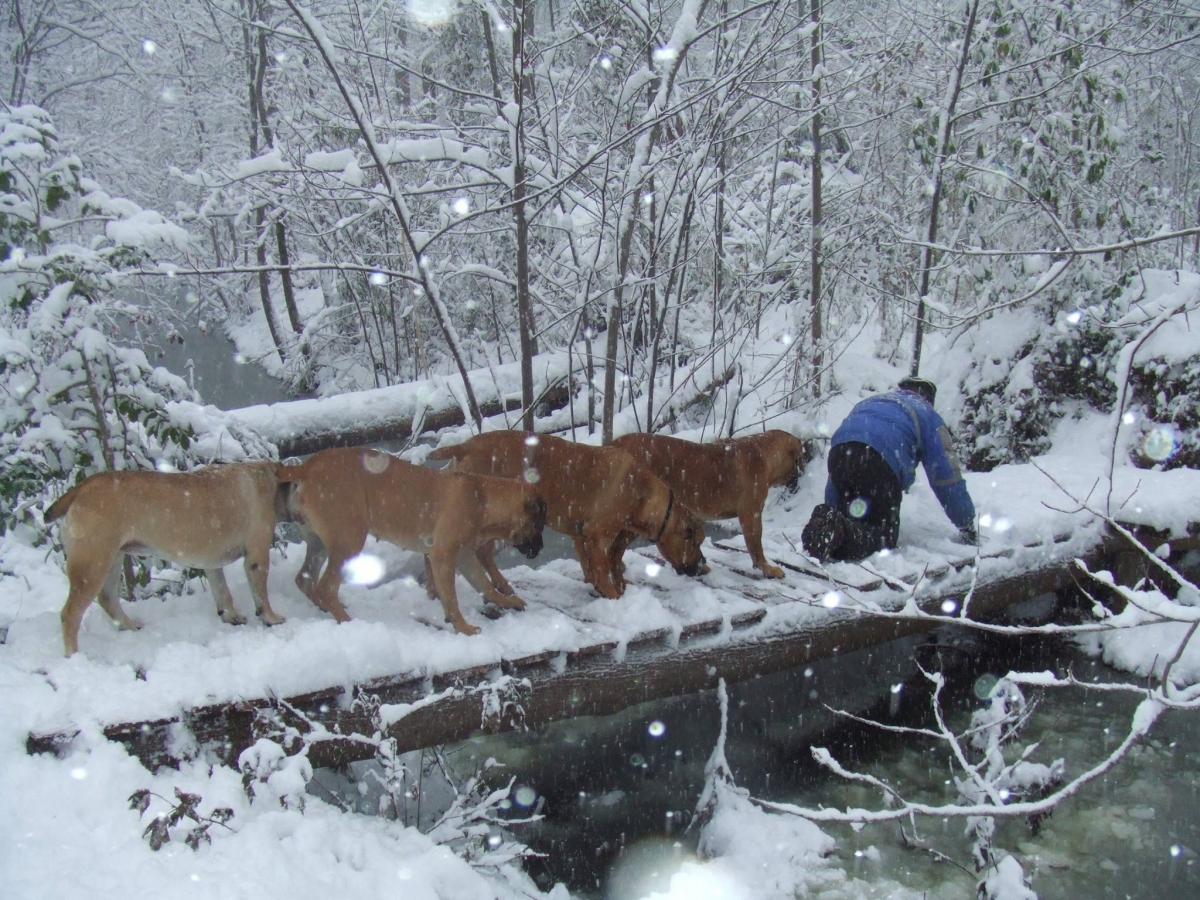 Inquisitive and willful, Boerboels are eager to help the humans they call their own.
There are several issues that continue to plague the breed. Photos from the early 1980s show dogs that were very straight in the rear, with hyper-extended hocks, a problem that persists today. The same applies to toplines: You will see some dogs in the ring who have a beautiful, firm toplines, and others who resemble the old gray mare. I believe that in the country of origin, if a Boerboel was a good farm dog and proved useful in working the farm, there was not as much emphasis placed on the structure of the dog, which allowed faults like these to persist.
Due diligence on the breeders part has remedied both of these issues somewhat but, again, the Boerboel is a relatively new breed in AKC circles, so there is continued work to do. I’m eager to watch our breed evolve here, and for judges to become more knowledgeable and enthusiastic about our special South African mastiffs.
© Modern Molosser Magazine. This article may not be reposted, reprinted, rewritten, excerpted or otherwise duplicated in any medium without the express written permission of the publisher.
Fri, 08/24/2018 - 6:44pm