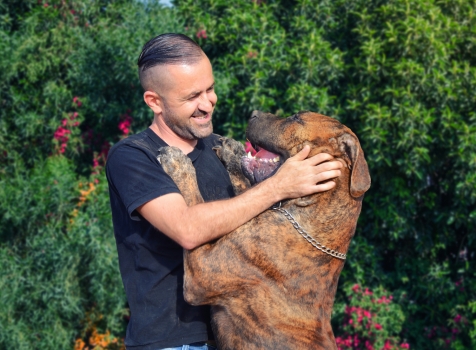 Sometimes when you are trying to figure out what you are, it helps to decide what you are not.

That is the case in so many of the Molosser breeds, which are so closely related both in terms of phenotype and genotype — fancy ways of saying appearance and pedigree, respectively — that it can be easy to drift into the lap of another breed.

Among all the Molossers, the Boerboel arguably has the most unfixed type. (The Cane Corso, another newly standardized breed, also comes to mind, though the problem arguably is not that correct type is unclear, but rather that so many breeders struggle to achieve it.) South Africa’s answer to the Mastiff, the Boerboel was – as its name, which means “farm dog” in Afrikaans, makes quite clear – bred by Boer farmers, who focused on function, not standardization. Indeed, so diverse is Boerboel type that one could convincingly argue that these dogs are still on the threshold of being a bona-fide breed, and instead are a very highly evolved land race, on a par with the Gampr of Armenia. 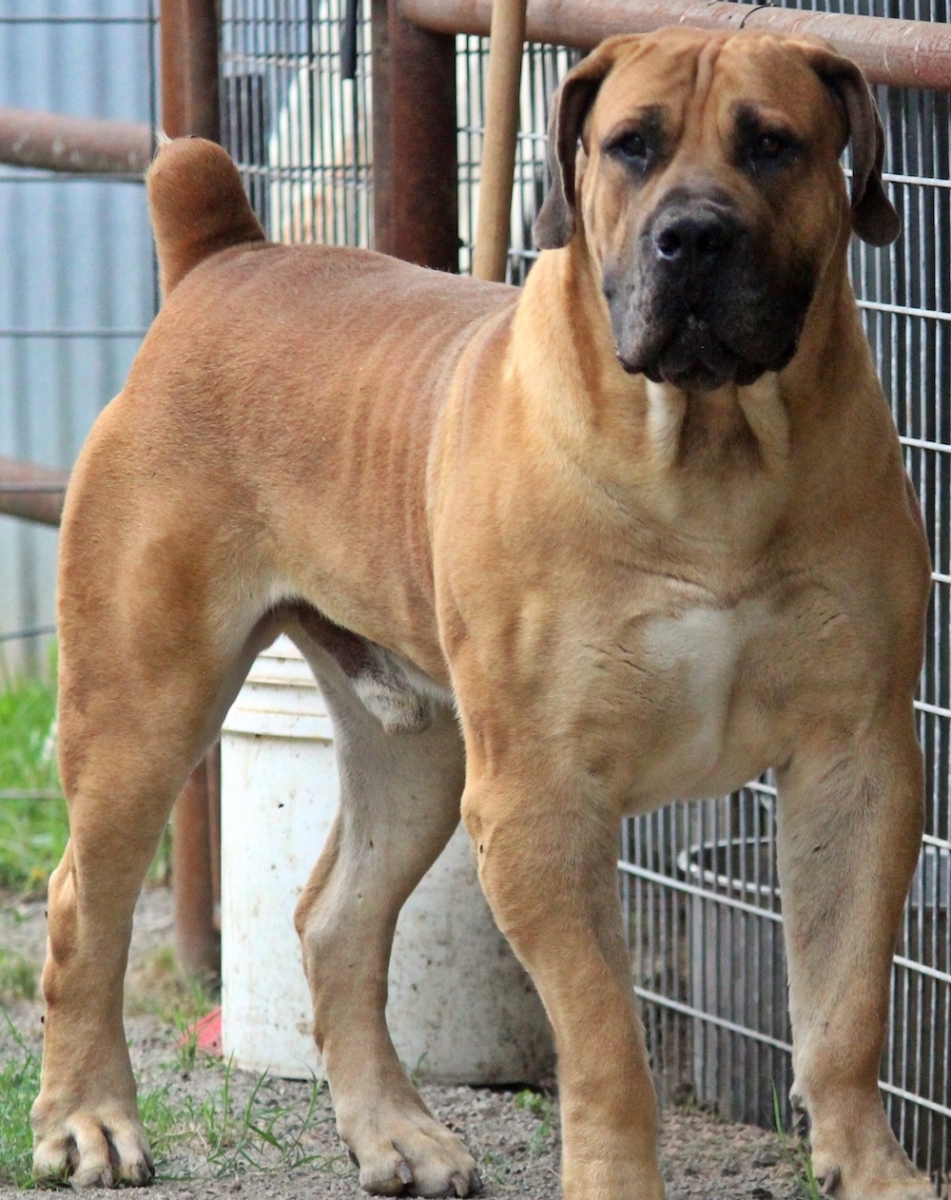 A typical Boerboel male (above) and bitch (below). Photos courtesy of Amanda Viljoen. 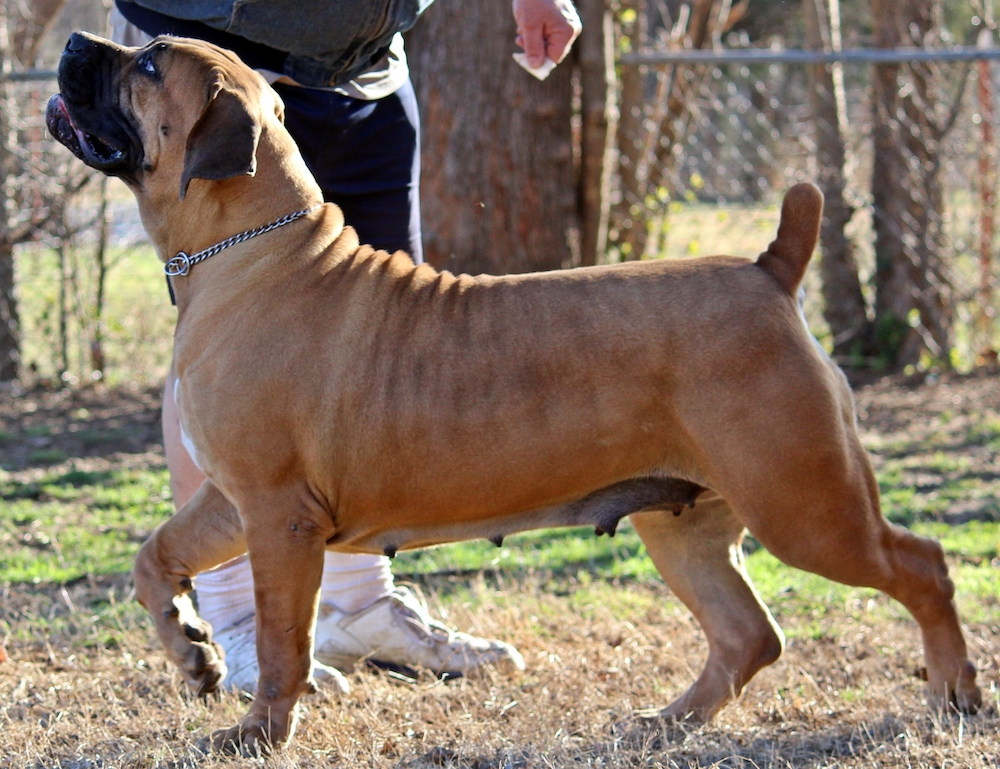 The Boers’ other homegrown breed, the Rhodesian Ridgeback, likely would have lingered in a similar cynological Neverland had it not been brought north in the late 19th Century to then-Rhodesia, where the British took over, established type and spearheaded a standard, all the better to discuss over tea. Both breeds incorporated Bullmastiffs, which were imported to South Africa in the 1920s to be an effective guard in the diamond mines, as well as longer-legged, old-fashioned Bulldogs, though the influence of both those bully breeds is obviously much stronger in the Boerboel than in the Ridgeback.

Complicating matters for the Boerboel is the current disarray in its country of origin. The lucrative market that has sprung up around black Boerboels – which have never been a historical part of the breed – has ignited lawsuits as South African courts try to sort out which entities can officially be declared its stewards. Meanwhile, the Kennel Union of South Africa, which sides with traditional breeders who do not see the black dogs as purebred, is not issuing pedigrees. And efforts to have the breed recognized by the Fédération Cynologique Internationale are similarly stalled until the mess is sorted.

In the meantime, the breed, which was recognized by the American Kennel Club in 2015, continues to progress in the United States under the auspices of the American Boerboel Club, which is working vigorously to keep dogs with black-Boerboel pedigrees out of the AKC registry. (The breed’s AKC standard accepts only the historical colors of brown, red and fawn, as well as brindling, and has made black or blue coat color a disqualification.)

Central to the American breed club’s efforts to maintain correct type across the span of an ocean is Amanda Viljoen, a native South African whose Cabaret kennel in Sapulpa, Oklahoma, is home to more than 40 Boerboels. Viljoen co-breeds with her father Lood Mienie of Wolmaransstad, South Africa, one of the few breeders still actively breeding since the start of the first Boerboel registry in 1983.

Modern Molosser recently had the opportunity to discuss Boerboels with Viljoen as well as Kate Nicholson and Kerri Dale – the three are the judges-education chair, president and secretary, respectively, of the American Boerboel Club. The discussion centered on Boerboel type, and how all interested parties – breeders, judges and puppy buyers – can get a firmer handle on it.

A good portion of the answer, as we suggested at the outset, is in amplifying the difference between the Boerboel and closely related breeds such as the Bullmastiff. (This approach worked perfectly in Helene Nietsch’s comparison of the Bullmastiff and Dogue de Bordeaux, two breeds that are sometimes confused, especially when the latter is black masked.)

Here are some of the highlights:

Bulldog continuum. One useful way to think of the Boerboel is the in terms of the “Bulldogness” it possesses in comparison to similar Molosser breeds.

On the other end of the spectrum is the Dogue de Bordeaux, which has more of Bulldog influence than the Boerboel. Unlike the Boerboel, the Dogue has a heavier front end and an undershot bite, which is what gives it the essential upsweep of chin and nose placement set back from the front of the muzzle.

From top to bottom, a study in increasing "Bulldogness": the Bullmastiff, the Boerboel and the Dogue de Bordeaux.

There are elements in the general appearance of the Boerboel – the sturdy limbs, wide shoulders and head, and dense body – that suggest this Bulldog influence. But they are tempered, always, with a nimbleness and suppleness that give the breed a much greater degree of athleticism.

To be sure, the Boerboel walks a tightrope in terms of this Bulldog influence. Not enough, and the breed begins to resemble the Ridgeback, which has a generic, basic-dog construction. Too much, and the breed gets too exaggerated and Dogue-like.

Getting Mouthy. The muzzle and bite are another area of difference between the Boerboel and his aforementioned European cousins. Neither the Bullmastiff nor the Dogue de Bordeaux should have a scissors bite. (They are instead undershot; in the case of the Bullmastiff, the bite can also be level.)

The Boerboel standard, by contrast, considers a scissors bite to be ideal. In keeping with that thinking, the Boerboel standard says the muzzle should be “slightly more than a third of the total length of the head,” presumably to accommodate the extra length that usually comes with a scissors bite. (The Dogue and Bullmastiff, by contrast, have shorter muzzles, with a two-to-one ratio of skull to muzzle.) Unlike most Molosser muzzles, which are typically blunt and of equal width from root to tip, the Boerboel’s muzzle “narrows slightly toward the nose.”

This slightly longer muzzle means that the Boerboel certainly doesn't show chin, as does the undershot Dogue. Indeed, Viljoen notes that black-masked Dogue de Bordeaux young puppies are essentially indistinguishable from Boerboel babies. But eventually the Dogue’s lower jaw begins to grow and develop it characteristic undershot curve, and appearances begin to diverge.

A comparison of heads. From left, Bullmatiff, Boerboel and Dogue.

None of this, however, should be taken to mean that the Boerboel should have a weak or snipy muzzle. Viljoen notes that the sides of the muzzle should line up with the eyes; since the Boerboel standard describes the eyes as “widely spaced,” it follows that the correct muzzle is quite broad as well.

Heady stuff. If Dogue de Bordeaux fanciers are pleased to call their dogs “pumpkin heads,” the Boerboel is not far behind. Though the Boerboel standard says the head is in proportion to the body, the breed’s bone and substance are such that the head appears quite massive – especially when one sees a Boerboel’s noggin contrasted to a human one.

Let’s look a bit closer to find other areas of difference in head type that set the Boerboel apart. In the Dogue, the stop (the area where the face meets the muzzle) is very pronounced, forming almost a right angle; in the Bullmastiff, the stop is described as moderate. In the Boerboel, by contrast, the stop is comparatively minimal, described in the standard as only “visible, gradually sloping” and “not steep.” 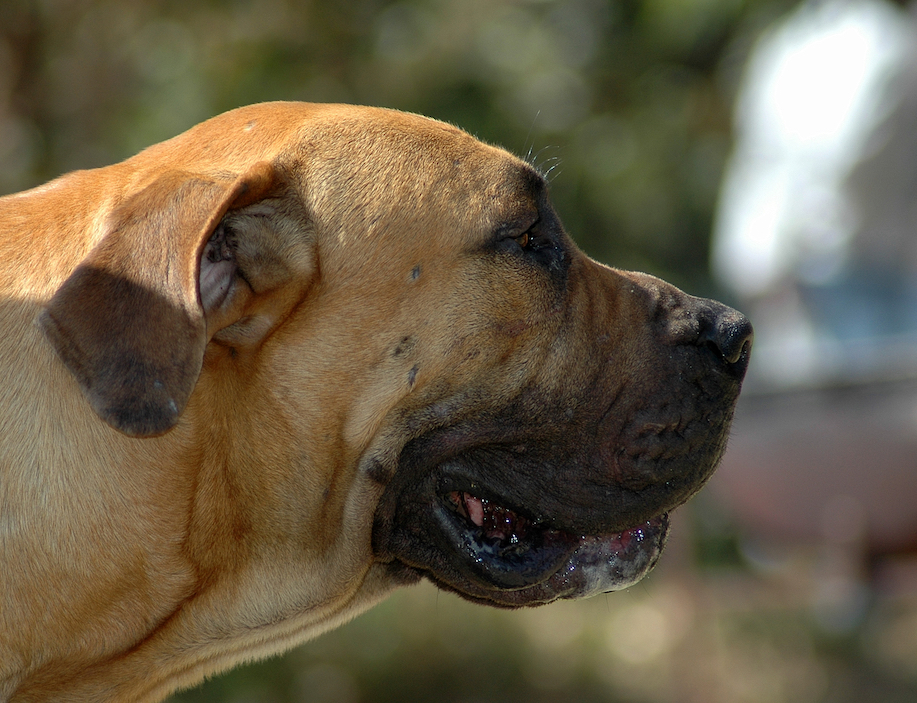 A correct Boerboel head is relatively clean, without excessive wrinkle, and, as with this dog's correct profile, the stop should not be too pronounced.

Wrinkle is another area of departure for these breeds. While a Dogue de Bordeaux should not resemble a Neapolitan Mastiff in terms of its skin folds, the breed does have furrows of symmetrical wrinkles on each side of the median groove. While you might think otherwise by looking in the Bullmastiff ring these days, that breed should not have head wrinkles when in repose; otherwise, how would it alert its handler, whose hand would have rested lightly on the dog’s head during their inky nighttime rounds, to the presence of a poacher?

As with wrinkle, we have lip: Boerboels should not have hanging lips. What’s acceptable for a Dogue (“moderately pendulous,” says the standard) or a Bullmastiff (“pendant and very deep”) is too much for a Boerboel. While the Boerboel standard says the upper lip is “loose and fleshy,” it qualifies this by saying that when viewed from the side the flews “must not extend beyond the lower level of the jaw bone.” That “must” is all important: Like its negative corollary, “never,” it signals an aspect of type that is non-negotiable.

Two incorrect Boerboel heads: The one at left is too weak, with a pointy, long muzzle and lack of fill under the eye more reminiscent, suggesting perhaps some Ridgeback influence. The dog at right unfortunately evokes a Bullmastiff, with eyes that are set too high in relation to the nose.

Heavy necking. You would be hard-pressed to find any breed with a neck as thick and strong as that of the Boerboel. The standard says the powerful, medium-long neck “forms a muscular arch,” and in the best dogs this is abundantly true. “Gradually increasing in width from the head to the shoulders,” the correct Boerboel neck is striking for both an appearance of strength and a fluidity of form; given that the breed’s body is so blocky and muscular, this only accentuates the neck’s width and power. 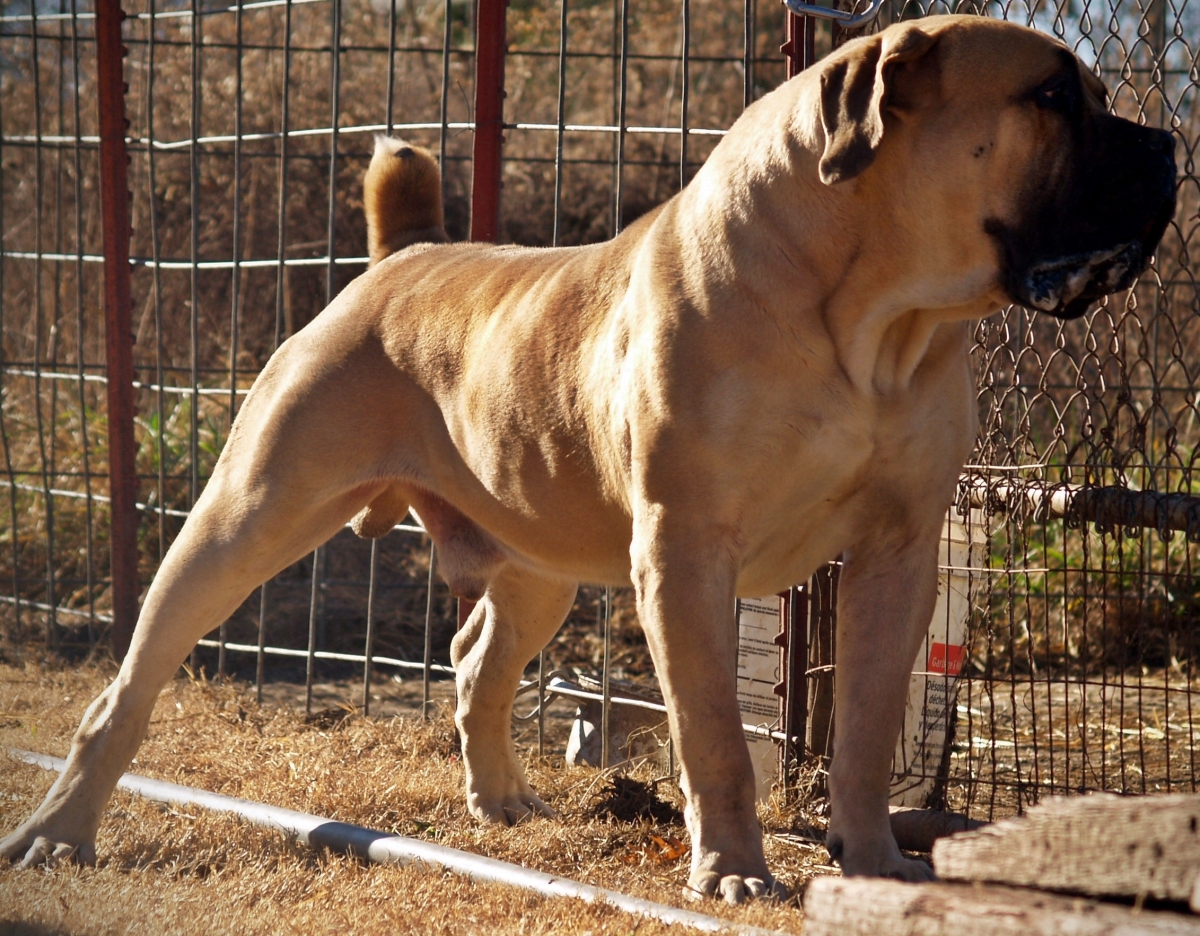 This dog illustrates the strong, heavy, arched neck that is an important part of Boerboel type. Photos courtesy of Amanda Viljoen. 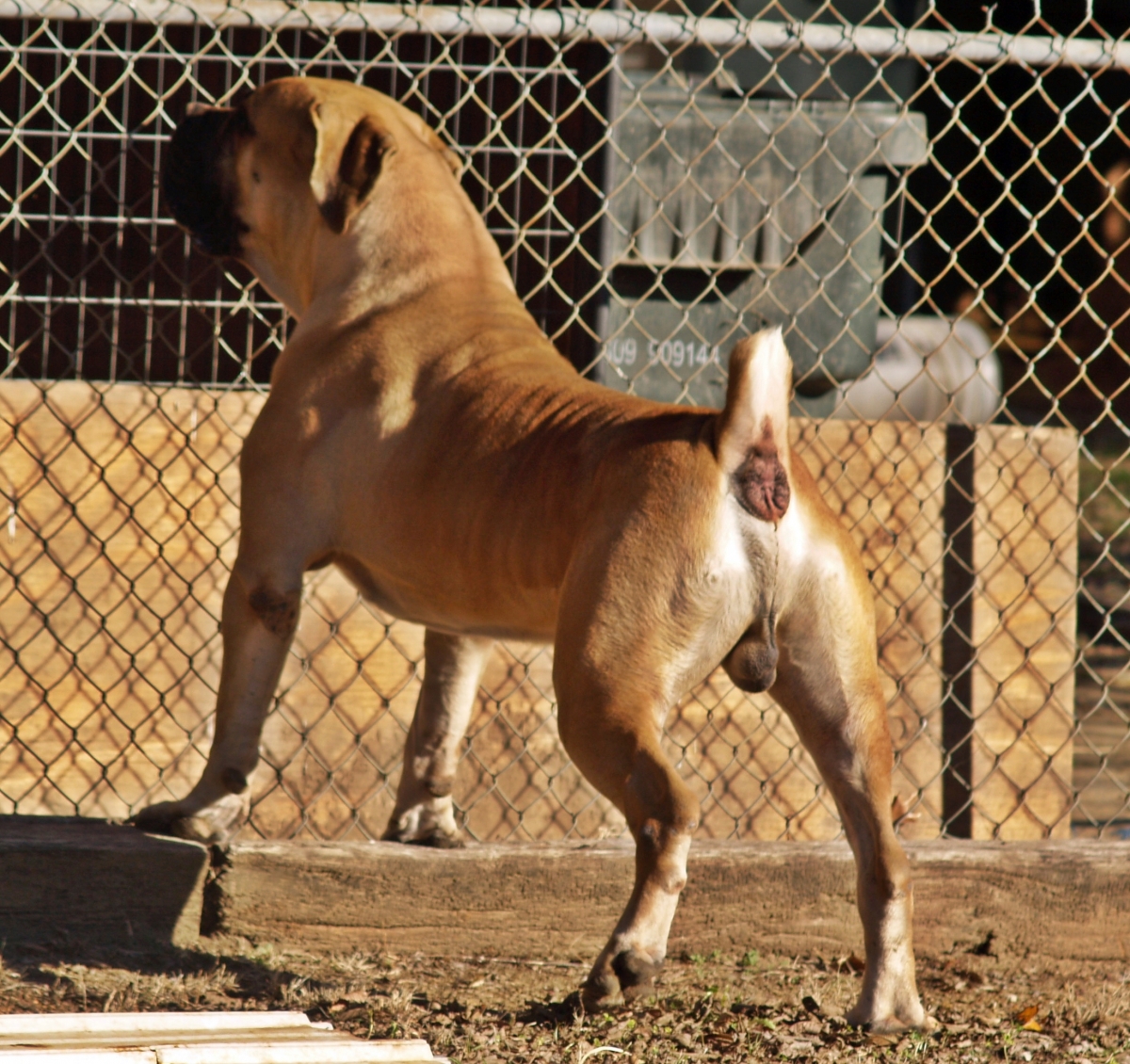 High profile. The Bullmastiff’s outline is supposed to be “nearly square,” all the better to differentiate it from its more rectangular forebear, the Mastiff. The Dogue, by contrast, is longer than tall – specifically, in the proportion of 11/10 when contrasting length and height, or 11 percent longer than tall.

Fitting nicely into our overall concept of being the middle ground between the Bullmastiff and the Dogue, the Boerboel is longer than the former but shorter than the latter. Its standard gives an ideal proportion of 10/9, or 9 percent longer than tall.

While we’re on the subject of the body, let’s talk about toplines. All three breeds are supposed to have level backs, but in reality only the Bullmastiff achieves this regularly, thanks to its more compact proportions. In both Dogues and Boerboels, which are longer cast, the toplines can be somewhat dippy, and at their worst do a serviceable impression of a hammock.

So, similarly, in the Boerboel, just because a level topline is difficult to achieve doesn’t mean breeders shouldn’t try for it. And in theory, it should be easier to achieve in the Boerboel than the Dogue, because of relatively lesser degree of Bulldog influence.

© Modern Molosser Magazine. This article may not be reposted, reprinted, rewritten, excerpted or otherwise duplicated in any medium without the express written permission of the publisher.
Mon, 04/08/2019 - 4:08pm