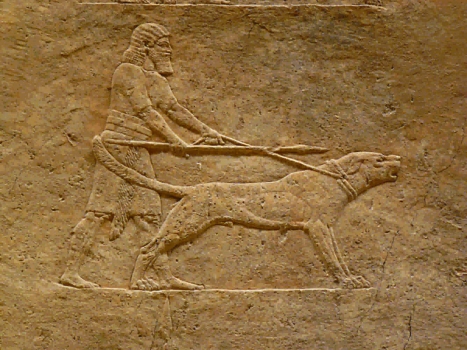 Massimo Inzoli visits Molosserdom’s Holy Grail
By
Massimo Inzoli
I  read on the Internet that the most popular vacation spot among Italians this year was London. Good Italian that I am, and since I had never been there, I decided not to ruin the statistics of this survey. So I booked the English capital for my vacation break, too.
After visiting the various tourist traps, mandatory for anyone who visits this capital, I could not leave off the checklist a day dedicated to the British Museum, which, considering it was built in 1753, surely is the oldest public museum in the world. There one can follow, through the artifacts of humankind, thousands of years of our history.
The museum is located in the Bloomsbury and Fitzrovia district, and – in a grand sign of civility intended to expose as many people as possible to culture – admission is free, with the exception of some temporary exhibits that require a fee for entrance.
I started to read the museum map in order to plan my visit, and, as I scrolled through, it jumped out at me: the section that contained the remains of the Assyrian civilization, from the city of Nineveh. That city, now vanished, was in an area that we now know as modern Iraq.
At the end of the 11th Century, the Assyrian kings built their sumptuous palaces at Nineveh: the one for Assurnasirpal II (884 - 859 A.C.); the two erected for Sennacherib, the most important of which is known as the Palace of the Southwest; and the residence of Assurbanipal to the north. The palaces of the last two monarchs were decorated with wonderful reliefs of hunting scenes and banquets. And precisely in these bas-reliefs was the reason I was so interested in that part of the museum dedicated to Nineveh.
In room 10, on the ground floor, were beautiful bas-reliefs depicting a lion-hunting scene, dating from around 645-635 B.C., which decorated the halls of the palace to the north.
Today the ancient Assyrians are mainly known for their terrible ferocity against conquered peoples, who were deported and massacred without mercy. But their interests also included the breeding of a heavy and powerful dog to be used in the hunt of various animals, particularly excelling in the lion hunt.
In ancient Assyria, lion hunting was considered the sport of kings, which embodied the spirit that a monarch of that time had to have, defending and fighting for his people.
These bas-reliefs praised the feats of the last great sporting Assyrian king, Assurbanipal. Full of action and realism, the hunting scenes stand out among the finest masterpieces of Assyrian art. They depict the release of the lions, the tracking of them, and the final kill.
What I wanted to see was the part where the lion, hit by the arrows of the king, fell and died. On the left were the guards with four heavy, powerful Molossers stationed at the edge of the arena, to ensure that the lions did not escape. Behind them a line of soldiers with raised shields and spears were ready to stop any exhibit that tried to free itself. 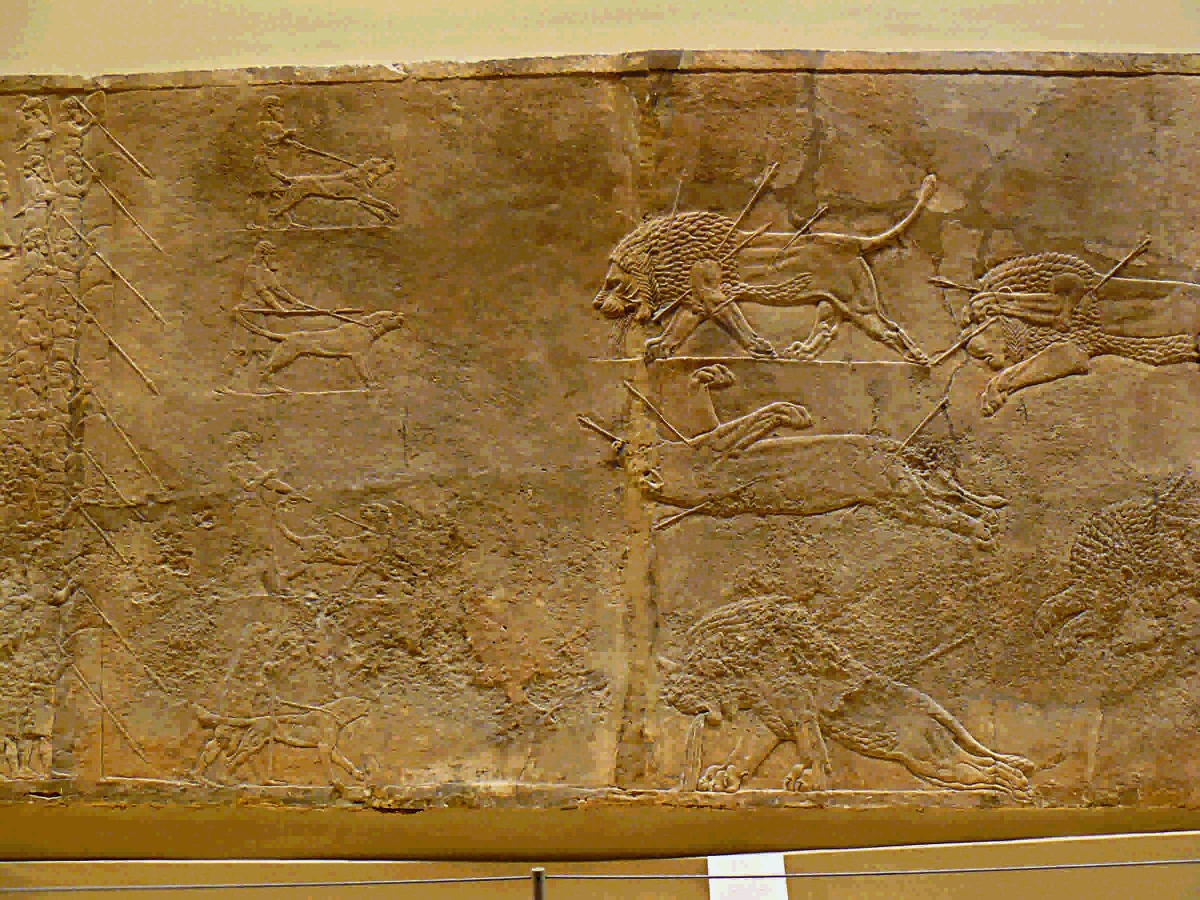 It’s useless to try and describe my emotions at the sight of these representations I’ve described. Overtaken by a kind of rapture, I started to photograph the four Molosser dogs portrayed there.
The shots were a bit difficult, because I wasn’t prepared for a museum photo shoot. The first pictures, taken with a flash, seemed cold to me, because they could not convey the depth and warmth of the figures on the marble. With a bit of good effort, I used the artificial light in the room, which in the end better captured the depth of the reliefs.
I remember with a smile the tourists walking around, wondering what the hell was so interesting about that portion of the stone, which made me spend a good hour making numerous attempts until I finally got a good shot. Immediately another tourist after me began to photograph the same section: “If this crazy man photographs it, it must be something important!”
The four dogs depicted were arranged vertically to form an imaginary line of defense. These were powerful subjects, of good and strong bone, and well-defined musculature. Rectangular in outline, they had well developed and descended chests. The heads had good volume and had muzzles that were strong and shorter than the skull. The ears were more or less short and pendulous, and the eyes seemed somewhat rounded. What struck me particularly was the development of the withers on the sculpted subjects. If the artist, who I don’t think was a cynologist, represented in the form of the dog a region so important in its efficiency, this means that it was very evident in the subject used as models, and so, perhaps, already at that time was subject to selective breeding. 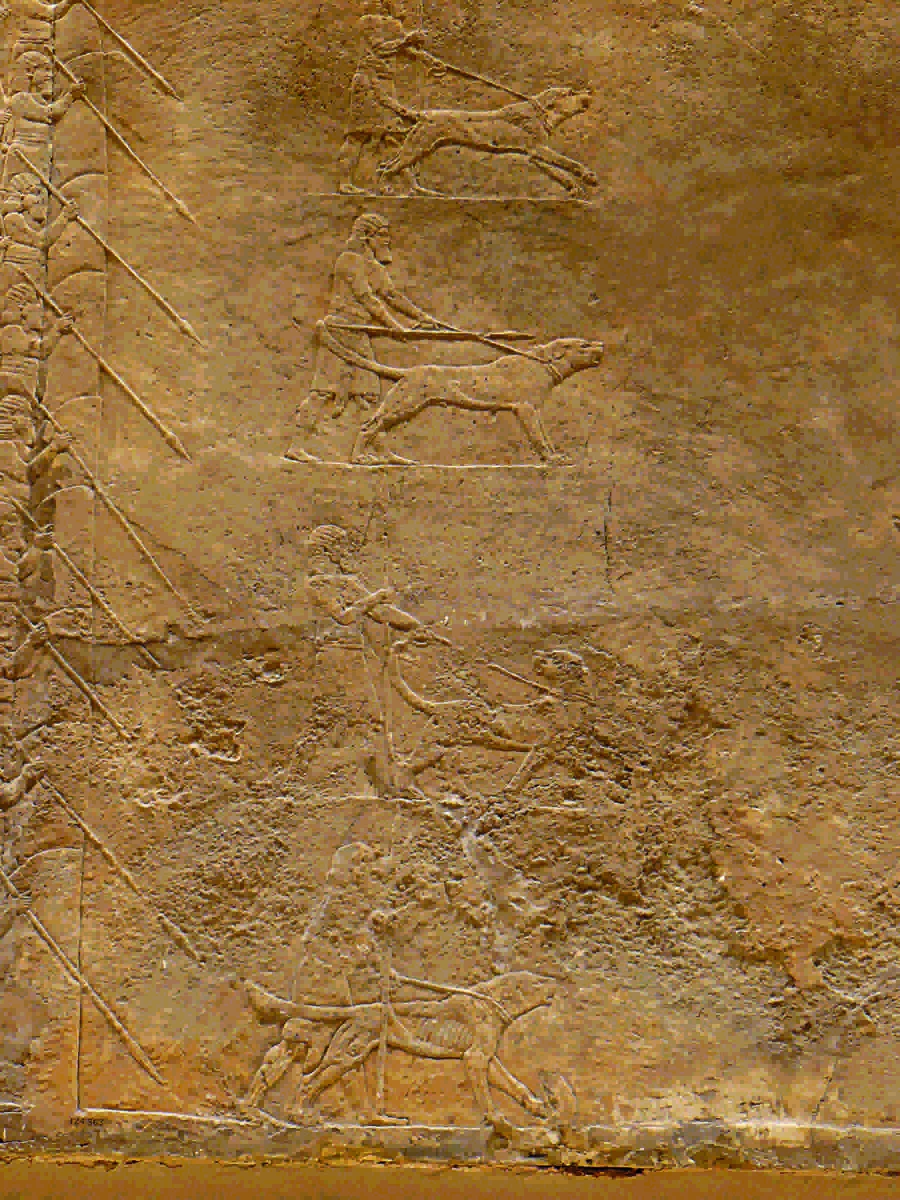 Certainly they did not know the technical reason for a long and sloping withers, but they probably intuited its utility and importance. I would make a similar remark about the feet, which were depicted as extraordinarily large and strong, with high and well-arched toes. A very thick tail completes the look of a strong and functional dog that was used for fighting. The height of these dogs at the withers was nearly half the height of the handler; assuming that a man of that time might be 150 to 160 cm tall (60 to 63 inches, or at least five feet), we are talking about a dog at least 70 cm (27.5 inches) tall. In other words, a great big Molosser! If we consider that most of the depictions of canines in ancient populations show dogs that are sighthound-like, agile and light, with long muzzles and erect ears, these for me, impassioned in general about Molossers, are precious pearls.
An unavoidable reflection comes to mind. When we as expert judges do our anatomical critiques, we highlight the importance of certain areas, so much so that we seem to overlook the dogs that are crowd favorites. The croup, the shoulders, the feet … to some these might seem to be areas of secondary importance compared to, let’s say, a head of good type (absolutely essentially in all the breeds). We are doing nothing less than pointing out, in light of the science and technology available to us, something that someone else, not stuffed with facts as we are, had perhaps understood in a more empirical way about 2,600 years ago. 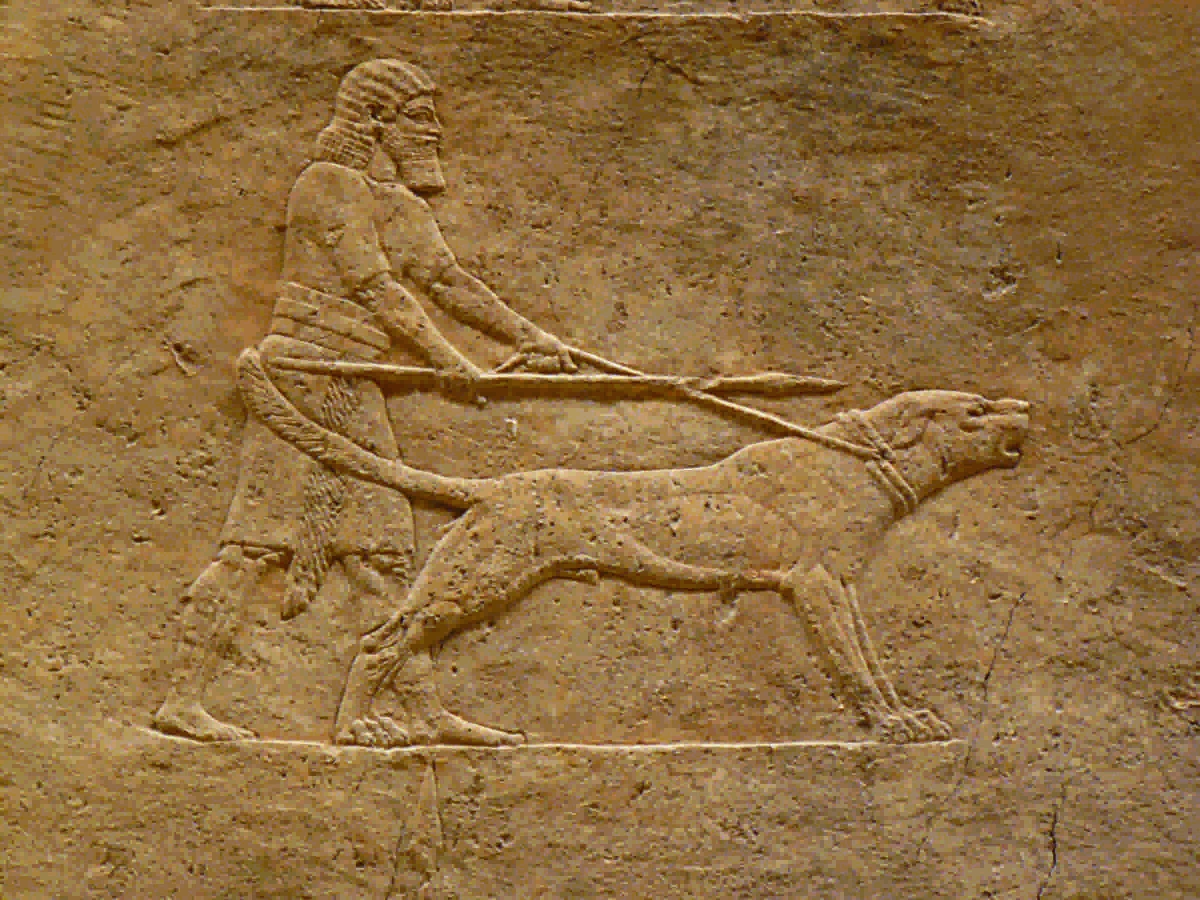 Returning home, I had only one discordant note. Thinking back over my wonderful day at the British Museum, I was reminded that that same museum houses a situla from Birs Nimrud, discovered by Sir Henry Rawlison near the ancient city of Babylon. This terracotta fragment from a deep, bucket-shaped vase depicts a slave who holds an enormous, grim-looking Molosser on a leash.
Alas, losing myself in the treasures of Nineveh, I did not have time to admire it. I need to return to London soon to do just that.
© Modern Molosser Magazine. This article may not be reposted, reprinted, rewritten, excerpted or otherwise duplicated in any medium without the express written permission of the publisher.
Fri, 03/16/2018 - 1:08pm