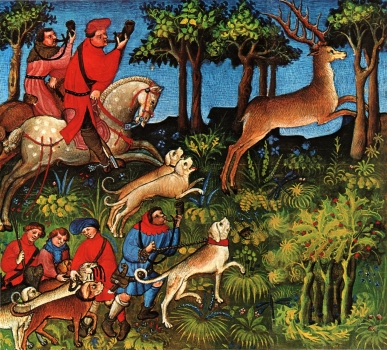 Why did English medieval law require the maiming of Mastiffs?
By
Denise Flaim

Plague-carrying rodents, thumbscrew-wielding inquisitors, overbooked executioners – there was a reason they called them the Dark Ages.

And medieval life was just as barbaric for animals – including, of course, dogs.

Among the best-known brutality inflicted upon dogs in the Middle Ages was “lawing” – in other words, a practice that made a dog “lawful,” or legally able to be kept. The laws in question were the Forest Laws of England, which were put into place under King Canute in 1016, when the royal forests were established. Essentially, they stated that any Greyhounds that lived within 10 miles of these off-limits hunting grounds had to be maimed to ensure that they would be too hobbled to chase game, in particular the king’s deer.

At first, the fast-running Sighthounds were lawed by what the old foresters called “hamling,” or “hoxing,” in which the hamstring tendons of the thigh were severed. But by the time of Henry II’s reign, in 1184, mastiffs living near the royal forests were required to be lawed as well. From that king’s medieval decree, expeditatio mastivorum, comes the term “expeditating,” which required three toes of the front feet to be amputated. (In a variation of this theme, sometimes the large pad of the foot was removed, a process that was repeated every three years.)

All mastiff-type dogs were required to be lawed, unless the owner had a special grant or charter from the king to the contrary. Every three years, an assessment of the mastiffs in a forest-bordering area was made, done “by the view and testimony of honest men.” The fine for an unlawed mastiff found in the forest was three shillings; if the dog hurt any game, an additional fine applied. English gameskeeper John Manwood described the lawing of mastiffs in his 1592 essay A Brefe Collection of the Lawes of the Forrest:

“The mastiff being brought to set one of his forefeet upon a piece of wood of eight inches thick, and a foot square: then one with a mallet, setting a chisel of two inches broad upon the three claws of his fore-foot, at one blow doth smite them clean off, and this is the manner of expeditating mastiffs.”

Technically, expeditating only stipulated that the nails be removed “(“by the skin”), but the process inevitably took off a portion of the toes, as well.

The severity – and permanence – of this anti-poaching remedy underscores just how valuable the king’s hunting lands were considered by the aristocracy.

“Rich people – the king in particular – were very protective of hunting preserves in Europe, especially in England, where space is more limited,” explains Mike Loades, a British-bred and California-based historical consultant, author and documentary host, though he notes that the term “forest” was used quite loosely in those times. “A forest was not necessarily a place with trees. It was simply a type of royal hunting preserve, which could be heathland or moorland – basically, a place under royal protection with regard to hunting. And anybody found hunting there was a poacher.”

Dogs, of course, were the ultimate poaching machine. The large dogs of medieval England were mastiffs with a decidedly small “m” – true working dogs with more streamlined bodies and stamina at the gallop. Loades says that in addition to the large, short-faced dogs that telegraphed the modern Mastiff, medieval Englishman also kept Alaunts, another type of catch-and-hold dog that was built for more speed.

“They were quite athletic dogs, what they call the running mastiffs,” he explains. “They were really in the mold of a Dogo Argentino – they didn’t have a brachycephalic head, and had a longer muzzle and the ability to run fast enough to bring game down.”

“Orpheus, Eurydice and Aristaeus” by 15th Century Italian painter Jacopo del Sellaio tells the story of this ancient Greek myth. The white dog pictured is similar to the Alaunt type dog that would have been present in English homesteads in the Middle Ages.
Whether it applied to mastiff or Alaunt, the purpose of lawing was obviously to disable the dog so that he could no longer perform the “catch” portion of his job description. The dog could still continue to perform his “hold” function, acting as a guardian of home and perhaps flock, but ceasing to pose a threat to wild game. Later kings, in particular Edward I, decreed that harvest men could not bring even their lawed mastiffs into the forest; instead, smaller dogs were permitted to accompany them to protect the working man’s coat and dinner.
Historian Andrew Miller, an instructional associate at DePaul University in Chicago who publishes mainly on gender and masculinity, says that lawing had a powerful psychological component as well.
“It was a way of expressing power for the Normans,” who invaded England with the aptly named William the Conqueror in 1066, he explains. “The Normans were a very small minority of aristocrats, knights basically, and they subdued the Anglo-Saxon population through terror and violence.
“The quintessential stereotype of what it meant to be a man in the Middle Ages would definitely be riding on a magnificent horse with a falcon on your wrist and a big pack of braying hunting dogs behind you,” he continues. “Just the very fact that you were allowed to tool around with all that stuff and of course that you could afford it meant that you were somebody.”
The Normans were descended from the Vikings, who had such a strong affinity with their animals that they were often buried with their horses, but who also had a cultural proclivity for amputation and maiming across all species. And because animals were so closely associated with their owners, they were often their symbolic surrogates in various rituals.
“The Normans were ... pre-occupied with their own manliness and were much more open to using punishments such as castration and blinding than other medieval Europeans as they saw it as a way of destroying and emasculating their enemies,” Miller says. It was the Normans, for example, who introduced the custom of cutting off the tail of an enemy’s horse as an act of humiliation, with the first instance recorded in England in 1071. Sometimes, they took off the ears and lips, too.
“Lawing certainly intensified under the Normans in 1066, throughout 11th and 12 centuries and into the 13th,” Loades agrees. “I can’t recall reading about it later than that.”
Miller says that that trajectory of lawing in medieval England “makes political and social sense,” if you understand your British history. The practice spiked dramatically with the mutilation-happy Normans, and then began to fade with the reign of Henry III in the 13th Century. Strapped for cash, that monarch sold large tracts of the royal forests to raise funds, and the growing influence of the newly recognized, if still amorphous parliament gave commoners the ability to affect legislation.
Though the Norman focus on mutilation and amputation thankfully ebbed, what stayed in full force was the English appreciation for the animals that contributed to their subsistence and survival. The mastiff continued to be an integral part of the fabric of life, eventually over the decades evolving a definitive form – and a capital “M.”
© Modern Molosser Magazine. This article may not be reposted, reprinted, rewritten, excerpted or otherwise duplicated in any medium without the express written permission of the publisher.
Tue, 03/29/2016 - 12:28am