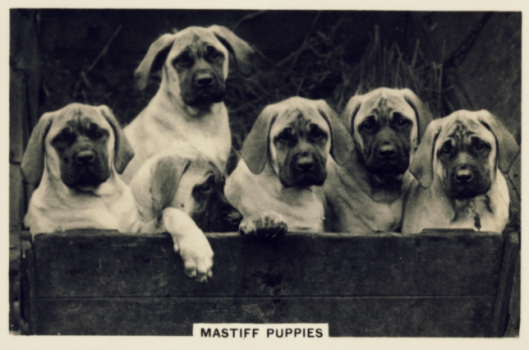 Blast from the Past

(Reprinted from the 1937 annual report of the Old English Mastiff Club. While today some of the advice is outdated — no one recommends feeding onions — the practical, hard-earned experience of these hands-on breeders is well worth revisiting. — MM)

In response to many inquiries, members have been kind enough to send in the following hints on diet which they hope may be of help to prospective Mastiff owners.
At six weeks old. Six meals a day, consisting of two of raw scraped beef, about two ounces at a time, with a little brown bread or small meal, slightly scalded with a dash of boiling water. The rest of the six meals to consist of Milk Food with the addition of a pinch of Calcium of Lime Phosphate, or Virol, and, once a day half a raw egg.
At eight weeks old. Five meals a day. Meat increased gradually to four ounces at a time, and in addition to the items given at six weeks, the puppies may now have milk puddings, junket, brown bread soaked in gravy, or boiled rice in gravy, and a whole egg at a time.
At three months old. Four meals a day, the meat having been gradually increased to ¾ lb. at mid-day and again in the evening.
At 8 a.m. and 3 or 4 p.m. a milk meal or milk and egg may be given as before. A large bone, and a hard biscuit should be added to the diet as soon as the puppies are able to enjoy it. Parish’s Food and Cod Liver Oil, well shaken together may be given, and fresh vegetables, especially onions, swedes, and tomatoes are beneficial from this age onwards.
At five months old. Three meals a day with 1 lb. meat in the morning and again at night with a milk meal at 2 p.m. Biscuits, meal, or bread should of course be increased in quantity and all the bone-making foods continued. If any sign of rickets should appear, meat should be increased, starchy food stopped, orange or tomato juice, marrow out of bones, and egg-shells crushed to a fine powder added to the diet.
At nine months old two meals a day are sufficient, and the puppy is now fed as an adult. A meal of hard biscuits is suggested in the morning and up to 2 lbs. of meat at night. Eggs and milk are much appreciated at any age. Hound meal and gravy are added to the meat, or a porridge made with maize, oatmeal and bran is sometimes used.
The quantity of meat and other food required will be found to vary considerably according to the constitution of the dog and the amount of exercise it gets.
Beef is the meat most recommended, but if the frozen variety is used, it should be thoroughly thawed before feeding. Well boiled paunch, or fish can be given as a change and liver is always acceptable and is very good for the blood.
As a general rule, puppies should not be taken [for] long walks under six months old, but after that the more walking a Mastiff has, the better he will be.
© Modern Molosser Magazine. This article may not be reposted, reprinted, rewritten, excerpted or otherwise duplicated in any medium without the express written permission of the publisher.
Fri, 03/16/2018 - 1:12pm

Spanish Mastiffs being presented in the show ring.

Handle With Care
Showing dogs is a challenge, and even more so when the dog at the end of your lead is super-sized. Five Molosser handlers share their tricks of the trade.