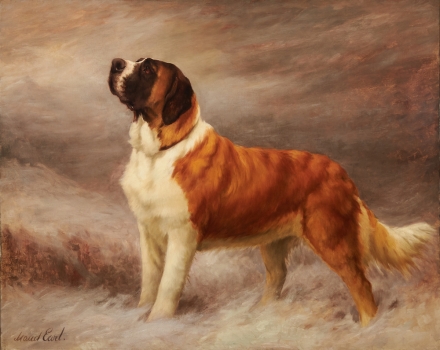 I appreciate both dogs and art, conversant enough in their intersection to know that Maud Earl wasn’t the character Beatrice Arthur played in that eponymous 1970s sitcom. And yet, I ruefully admit I never found my way to the AKC Museum of the Dog in St. Louis, where it resided for almost three decades.

Apparently, I was not alone in my inability to undertake the pilgrimage. Inspired by the famous real-estate aphorism – location, location, location – the American Kennel Club has relocated the museum to the corner of Park Avenue and 40th Street, just a brief stroll from Grand Central Station.

That Manhattan location – which also houses the AKC’s new fifth-floor headquarters – will certainly provide foot traffic: In Missouri, the museum drew fewer than 5,000 visitors last year; that many arguably pass its new midtown digs in just a matter of hours. And technically, the move is a re-relocation: When it was first founded in 1982, the museum was in the New York Life Building before heading west four years later. 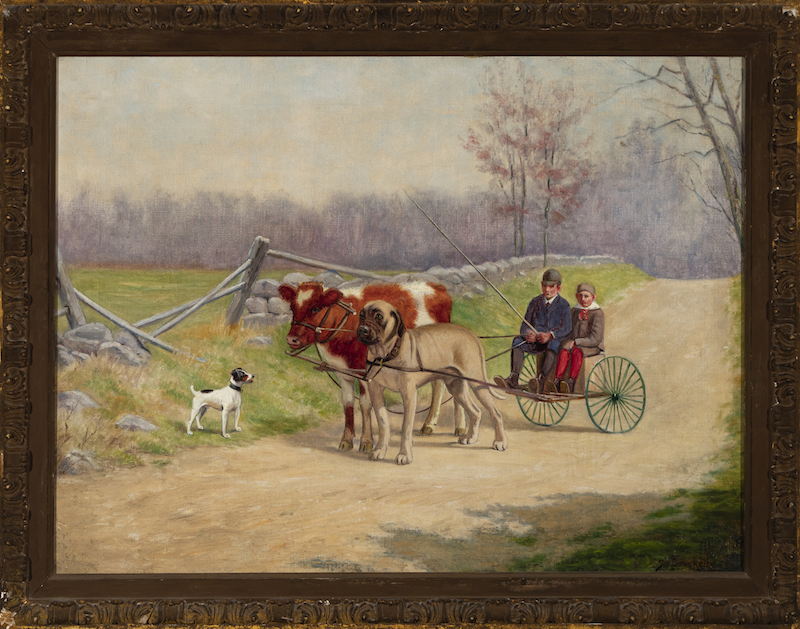 By Manhattan standards, AKC’s newly arrived canine collection is bite-sized: The city’s largest museum, the Metropolitan Museum of Art, covers some 2 million square feet of exhibit space; in comparison, the AKC’s 11,000 square feet is about the size of the Met’s roof-top bar. But as dog breeders know, quality always trumps quantity. And here the AKC collection shines, bejeweling the airy, two-floor space with works that are nothing short of iconic.

And many of them, it turns out, are Molosser-centric. 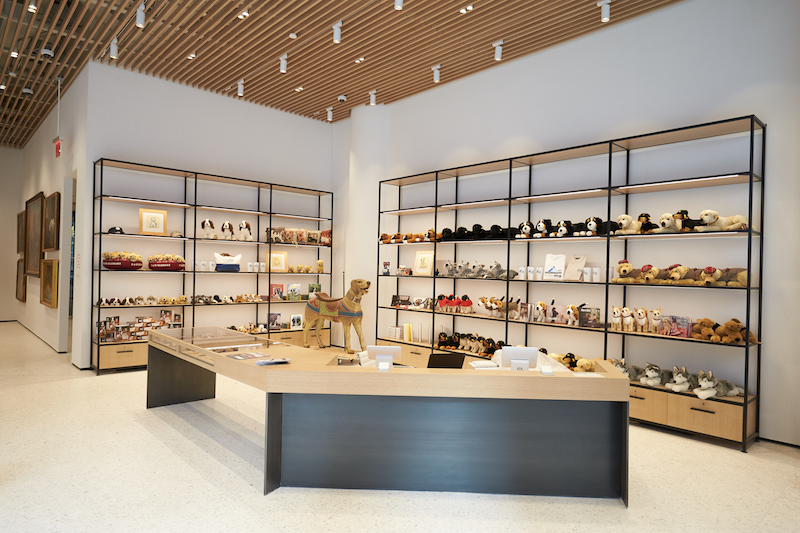 AKC Museum of the Dog gift shop. Note the Mastiff carousel figure in between the two shelves: Named "Queenie," she was carved in the late 19th Century by Charles Looff, who also created the first carousel in Coney Island, Brooklyn. Queenie was donated by the late Mastiff maven Marie Moore. 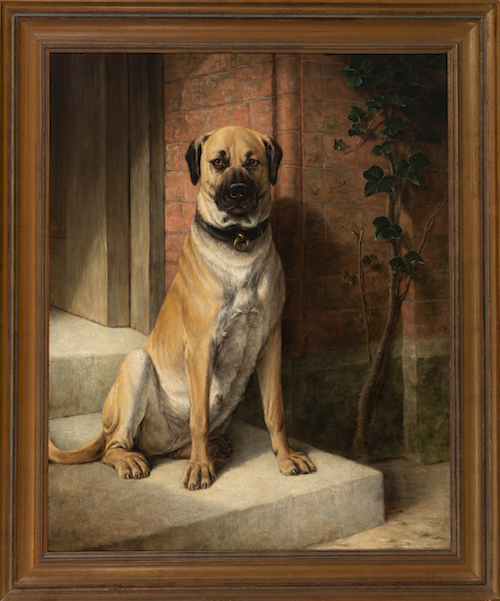 The museum’s executive director, Alan Fausel, notes that in the move to Manhattan, the museum pared down its collection to about 1,700 pieces. Some breeds were overrepresented, in particular Mastiffs and Bulldogs, with 360 and 200 objects, respectively.

The sheer scale of Mastiff art should not be surprising, as the collection includes a number of donations from the late Marie Moore, who helped re-establish the breed in postwar America. Collecting on an epic scale ran in her family, it seems: Moore’s uncle was the world-renown collector of Native American art, George Gustav Heye, on whose collection Washington’s National Museum of the American Indian is based.

Some of Moore’s pieces are absolutely priceless. Consider “The Poacher” by Richard Andsell, which depicts a forerunner to the modern Mastiff – or a prototypical Bullmastiff, depending on your breed allegiance. The mammoth 1865 work, which once dominated the entryway of Moore’s Virginia home, now hangs on its own wall on the museum’s first floor. It is intentionally mounted slightly above eye level – all the more to impress, with the grimaces of both human and canine interlopers and the estate dog charged with foiling them. 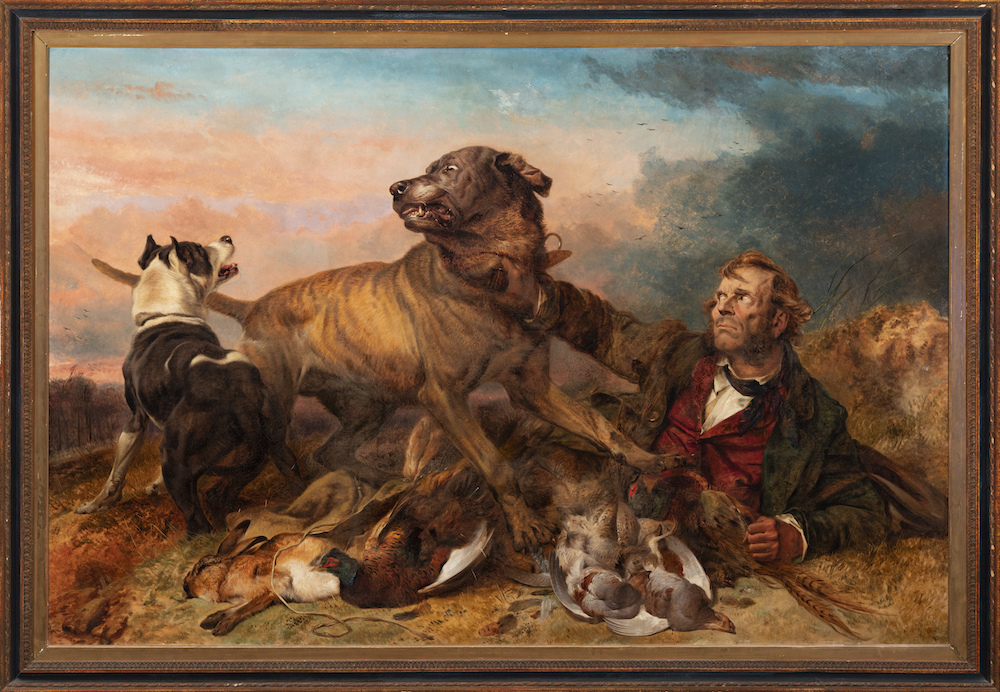 Fausel says the paintings on the museum’s grid-walled first floor were selected with a focus on their “monumentality,” and that’s certainly the case with Maud Earl’s “I Hear a Voice.” Unleashed from the kennel club’s previous mahogany-paneled offices on Madison Avenue, where it hung in the main lobby, the 1896 oil depicts a stunning Saint Bernard bitch against a blustery sky, her nose pointed skyward and her attention subtly diverted to the distraction that is the painting’s title; she doesn’t need one of those clichéd casks around her neck to communicate her role of imminent rescuer. (Irony alert: The model for the painting was a British show dog named Frandley Stephanie who presumably was never in eyeshot of the Swiss Alps.) 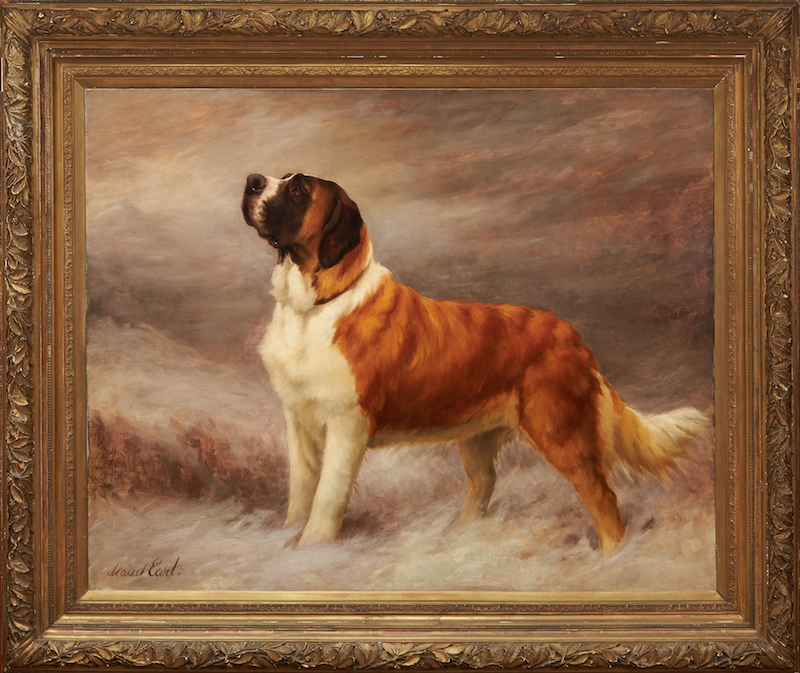 “I’ve sold many Maud Earls,” says Fausel, who oversaw Bonhams’ fine-arts department in New York and presided over its annual dog sale, “and I’m just now beginning to understand how subtle she is, how good she is. She really captured the spirit of the breed.” 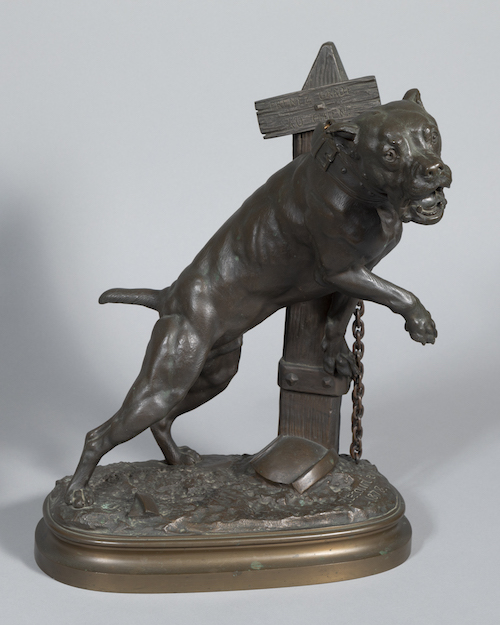 That said, breed identity was an amorphous concept when some of these great works were still wet dabs on the canvas. For example, the deliberately vague title of 1839’s “The Two Dogs” by Sir Edwin Landseer deftly sidesteps the label on its reverse, which identifies the pair as a Deerhound and Mastiff, despite the latter’s tricolor coat and Foxhound overtones. You can just hear the howls of protest should it be identified that way, even though Mastiffs and hounds were traditionally crossed centuries ago.

Modern museums are increasingly interactive, and the AKC Museum of the Dog has found plenty of opportunities to harness technology. On a downstairs wall, the names of benefactors crawl by on a digital display, from the heavy-hitter Best in Show donors at $10,000 a pop to the Blue Ribbon givers who paid for a $60 membership. Upstairs, near the library, which offers a sampling of general breed books (fear not – the AKC library proper has moved upstairs with its corporate offices), the “Meet the Breeds” table allows users to drag breeds into a virtual “dog house” to learn more about their appearance, origins and attributes. And even before they set foot in the museum, visitors encounter digital dogs in a sort of electronic frieze on the museum façade: There, silhouetted canines run, jump and trot, tempting even the most jaded New Yorkers to actually look up. 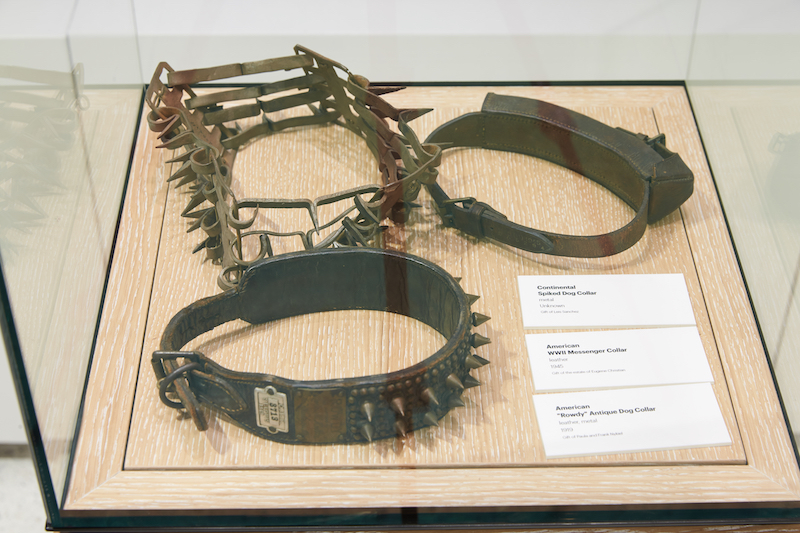 Antique dog collars on display at the AKC Museum of the Dog.

Like many museums, the AKC Museum of the Dog has an app that provides more depth than a mere wall label can provide. It offers “extended stories” on some 30 works. There’s also a museum mascot, the aptly named Arty – a blue dog of “indiscriminate pedigree” – who leads kids on a museum-wide scavenger hunt, in the spirit of Pokémon Go.

Arty's not a Molosser ... but you can't have everything.

The AKC Museum of the Dog (www.museumofthedog.org) is open Tuesday through Sunday from 10 a.m. to 5 p.m. Tickets are $15 for adults, $5 for children under 12, and $10 for students, seniors, youth and military veterans. Museum members have unlimited admission.

© Modern Molosser Magazine. This article may not be reposted, reprinted, rewritten, excerpted or otherwise duplicated in any medium without the express written permission of the publisher.
Fri, 02/22/2019 - 7:59am