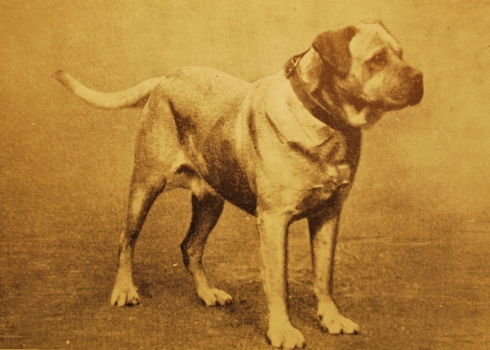 Just a Little Dash Will Do You

How the Bull-Mastiff Became the Bullmastiff
By
Amy Fernandez
A hyphen is just a little dash – except when it’s not.
Almost a century ago, when the Kennel Club in the United Kingdom changed the name of the Bull-Mastiff to the Bullmastiff, it was no trivial technicality: It signified that the Bullmastiff had finally shaken off its traditional designation as a hybridized mishmash and ascended to the status of a genuinely unique purebred.
“This powerful and symmetrical dog only assumed a definite identity as recently as October 1927 when the Kennel Club Committee agreed that Bull-mastiffs (purebred) should be added to the Non-Sporting section of the register and the first championship show at which classes were provided was that of Crufts in 1928,” wrote Croxton Smith in Dogs Since 1900, his mid-century compendium of recognized breeds.
That timeline certainly suggested some rapid progress. “In the modern Bullmastiff,” Croxton Smith noted, “we have an example of what can be accomplished by careful breeding in the course of a comparatively few years.”
Four, to be precise. In December 1924, the Kennel Club admitted the breed on a preliminary basis, explaining that “it is most important to observe the distinction between a Bull Mastiff (purebred) and a Bull Mastiff (crossbred) the former being a dog bred with both parents and the preceding three generations of Bull Mastiffs without the introduction of a Mastiff or Bulldog.”
Sounds clear cut, but like much purebred-dog history, the real story didn’t quite match the neatly gift-wrapped official version. 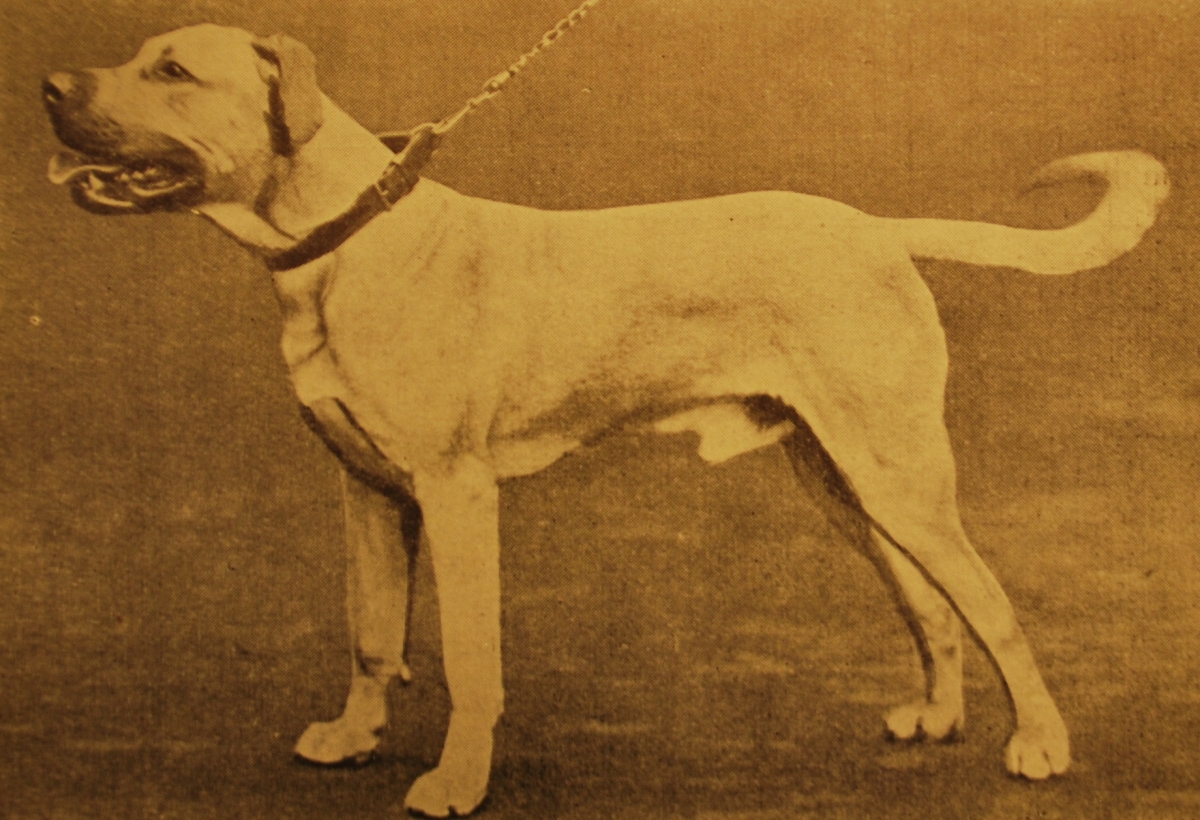 In 1928, the same year the Bullmastiff was recognized as an official breed, the Marquis of Londonderry sent this youngster to be exhibited at the famous Crufts dog show.
Shortly after being accepted by the American Kennel Club, the fully fledged Bull-Mastiff was featured in the July 1934 Gazette. The article opened with the author’s childhood recollections of the breed in Ireland during the 1880s, emphasizing the surprisingly consistent temperament exhibited by those old-style dogs, despite their eclectic ancestries.
“The so called bull mastiffs of those days were crossbred and often bad at that. Many were a mixture of several other breeds,” the article explained. “But they were splendid guards of person and property even in those days when police dog training was unknown. It was their natural instinct.”
Stable behavioral traits coupled with physical diversity obviously didn’t jive with the modern framework of purebred type. It was however, quite typical for countless functional working breeds. Traditionally, the selection process prioritized the traits necessary to get the job done. Bullmastiffs might have been all over the map in terms of appearance, but the breed’s utilitarian temperament was chiseled in stone: loyalty, courage and hardwired dedication to protect home turf. And for centuries, that worked just fine. Conformity of appearance and documented lineage were irrelevant until the mid-1800s, when Western culture rewrote the rules.
Mastiff/Bulldog combinations dated back to prehistory, and from the get-go the Victorian era’s new dog-breeding rules raised some significant questions regarding the actual goal of Bullmastiff modernization. This was more complicated than simply separating and documenting various bloodlines. An entire class of traditional breeds fell within this vaguely defined category. Their stand-alone status was contingent on diverse factors, specialized function, regional preferences and a few outstanding physical features – but even those parameters were pretty flexible. The possibility of melding this multifaceted conglomerate into a single uniform type seemed absurd. 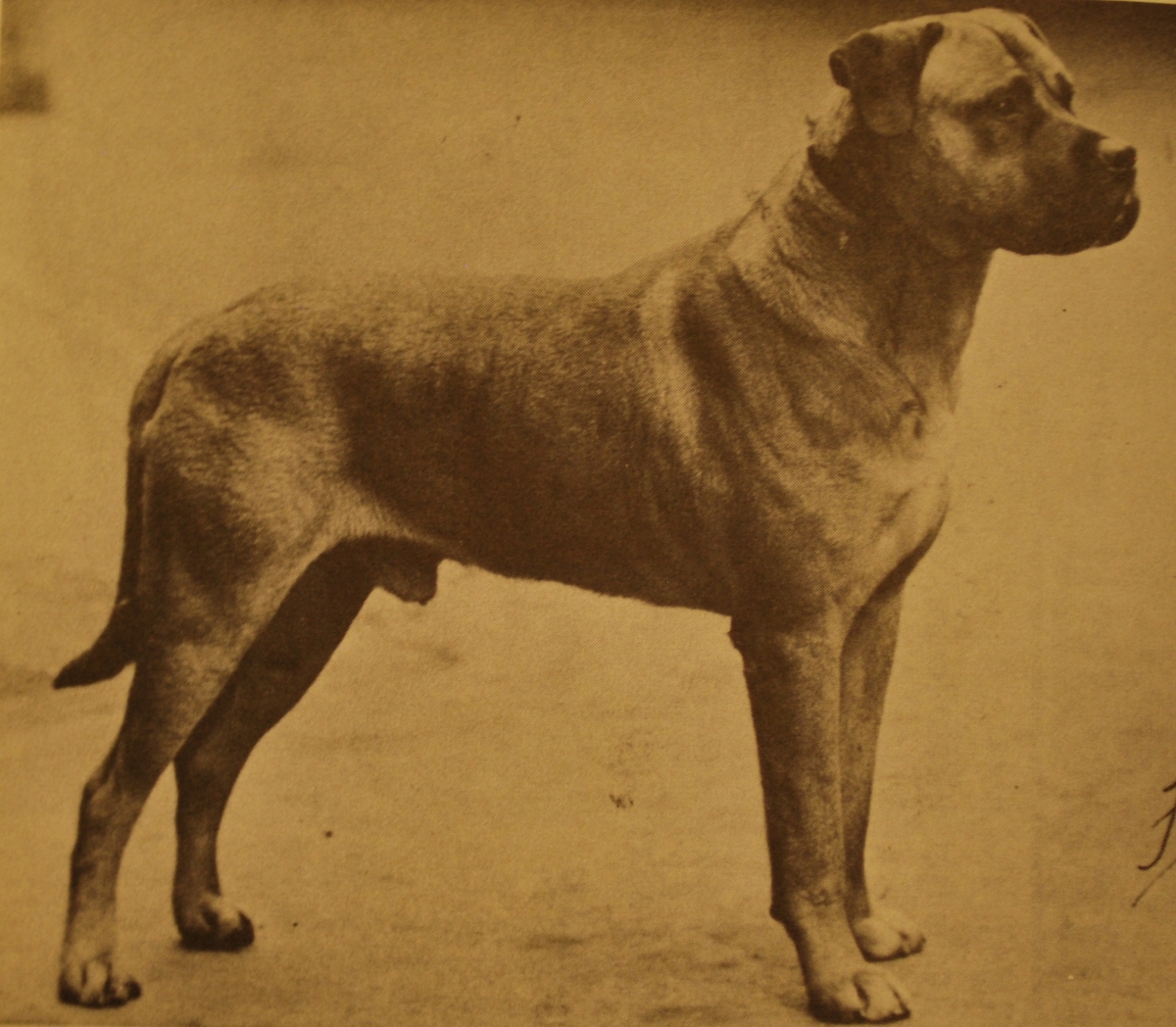 Ch. Roger of the Fenns. Every Bullmastiff alive today has him somewhere in his or her pedigree. Reflective of the rather loose breeding practices of the day, Roger of the Fenns also appears in some Mastiff pedigrees.
A strong argument could also be made for the idea that very blurred lines separated Bulldogs and Mastiffs from the outset. In his 1887 book Our Friend the Dog, Gordon Stables added his vote to the prevailing view that both Bulldogs and Mastiffs were later distillations of this basic design. “What is the origin of the British Mastiff? Is the Bulldog the father of the mastiff, or is the Mastiff the parent of the Bull? Or, as some writers incline to believe, was the original beast something between these two, possessing points and proper ties to each?”
That opinion was still going strong in 1948, when Brian Vesey Fitzgerald reiterated it in The Book of the Dog: “It may be safely deducted that the Bullmastiff was in existence long before orderly crossings were resorted to and that they did originate from two the two oldest breeds the Bulldog and the Mastiff.” More pertinent to the era in question, in 1922 Robert Leighton’s Complete Book of the Dog called the Bullmastiff  “the most popular of all halfbreeds, as a watchdog…almost worthy to be called a distinct breed.” 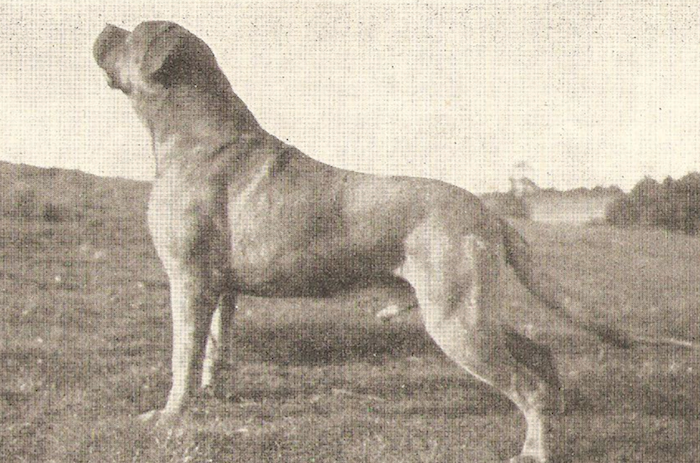 Rhodian, an impressive Bullmastiff from the 1940s.
In addition to these heavyweight opinions, there was plenty of tangible evidence supporting the breed’s validity. Bullmastiffs were in the picture from the start of formal dog shows. For instance, four years prior to the formation of the Kennel Club, six were exhibited in a class for Yard or Keeper’s Night Dogs at the 1871 Crystal Palace show.
“With the coming popularity of dog shows towards the end of the last century, some bull mastiffs were shown in special gamekeepers’ classes,” Leighton wrote. “The first show to schedule them being in 1900, these dogs were of diverse types, coarse and clumsy with large heavy ears and far from pleasing heads.”
Maybe not so beautiful, according to Vesey-Fitzgerald, but definitely present and accounted for… and gaining traction by the turn of the century.
Henry Davis’s Dog Encyclopedia also mentions these special classes for Keepers’ Night Dogs, including a 1901 show featuring a special event that really put the breed in the spotlight. The noted breeder of Thorneywood Mastiffs offered a one-pound prize to any volunteer capable of escaping a muzzled Bullmastiff. “The volunteer lost and The Field reported the famous encounter in detail on August 20, 1901,” Davis explained. “There followed much agitation to have the breed recognized.” 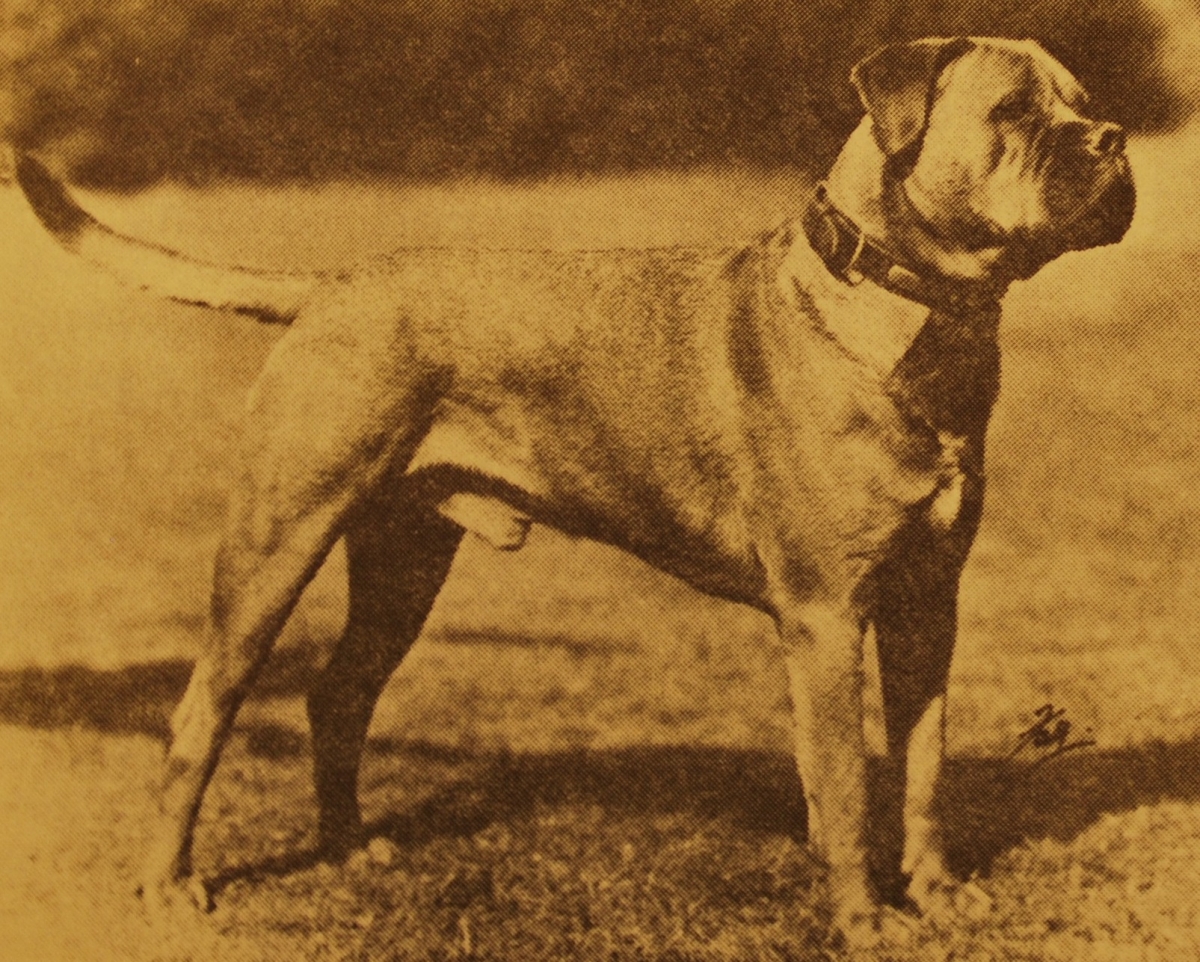 Robin Hood of Le Tasyll, whose paternal grandfather was Rhodian. Like all Bullmastiffs, he has Roger of the Fenns in his pedigree, on his mother's side.
In reality, the Kennel Club’s swift action in 1924 was the culmination of 25 years of lobbying for a breed that, as many experts contended, was in existence way longer than that. But historical accuracy didn’t seem to be much of a sticking point. It certainly didn’t infringe on the version offered in that AKC Gazette feature: “So the history of the purebred bull mastiff begins with their recognition as such by the Kennel Club in December 1924.”
Famed British Bullmastiff breeder S.E. Moseley didn’t mince words on the importance of that date when he was quoted as “the pioneer of the breed as it is today” in that AKC Gazette article. “There is no use tracing them farther back than 1924 because one will only find the crossbred,” asserted Moseley, who has been attributed with the magical 60 percent Mastiff/40 percent Bulldog formula that .
Time-tested cross – or newfangled British breed? We could still argue the point. But regardless of how, where or when the Bullmastiff got here, it’s here to stay.
Click here to read about S.E. Moseley’s role in the formal formation of the Bullmastiff – and the controversy surrounding him.
© Modern Molosser Magazine. This article may not be reposted, reprinted, rewritten, excerpted or otherwise duplicated in any medium without the express written permission of the publisher.
Wed, 09/05/2018 - 8:20am