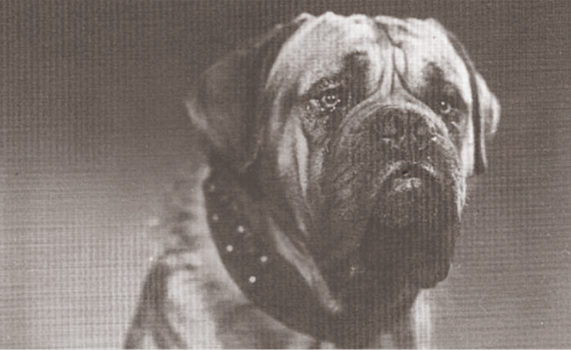 Some people have skeletons in their closets. Mastiff pedigrees have this Dogue de Bordeaux
By
Denise Flaim

No matter what breed you are speaking of, the “pure” in “purebred” is hardly an absolutely. From Saluki blood that crept into Afghan Hound lines, to Shih Tzus that were crossed with Pekingese to bring down size and legginess, virtually every breed has its own, er, genetic indiscretions.

Perhaps more than the average breed, the Mastiff has had relatively porous pedigrees, necessitated by genetic bottlenecks over the centuries, particularly by those created by the two world wars. Crosses to Saint Bernards, Great Danes, Bullmastiffs and others have occurred multiple times in the last century alone. And perhaps the most well-documented incursion of foreign blood into the Mastiff gene pool took place in the United States, with the Dogue de Bordeaux bitch Fidelle de Fenelon.

Four-year-old Fidelle (Xohor de Fenelon x Erine de Fenelon) was the first Dogue to be exported into the United States, in 1959. (It was another decade before the second, Rugby de la Maison des Arbres, arrived in 1969.) Fidelle was bred by Maurice van Cappel of Périgueux, an early breeder in the country of origin and president of the French parent club at the time. The man who bought her, Franklin Campbell – known to his friends as “Merle” – was a Mastiff breeder.

No photos of Fidelle are known to exist, but there are images of her father, Xohor de Fenelon, who was a typey, black-nosed Dogue de Bordeaux. Somehow, Fidelle was registered with the American Kennel Club as a purebred Mastiff, which she decidedly was not. (Fidelle likely inherited the dominant black nose color from her sire, making it a bit easier to disguise her Dogue roots.) She was bred to the Mastiff Merles Alvin (Weyacres Tars x Merle’s Princess), and became the great-grandmother (through her son, Baron of Wey Acres Tars) of the well-known brindle Mastiff Eng. Ch. The Devil From Wayside. “The Devil” was exported in 1973 to Great Britain, where he was controversial, not just for his mixed heritage, but also because of allegations that he was shy and threw that temperament in his get. Fidelle’s great-grandson, Eng. Ch. The Devil From Wayside, was whelped on an Illinois farm out of little-known parents. But after being exported to England, he obtained his championship there.

The infusion of Dogue blood into the Mastiff gene pool brought with it much needed soundness and muscle, as well as the drags of light eye color, pale pigment and too much breadth overall. In recent years, Campbell’s son, Merle Jr., wrote to the Dogue de Bordeaux Society of America to explain Fidelle’s involvement in Mastiff pedigrees.

“Dad brought the female bitch dogue in 1959 from France. There is not a Old English Mastiff in the world today that is NOT a descendant from this bitch,” he wrote in a letter that is posted on the club’s web site. “She was rather smallish by Old English Mastiff’s standards but well with in the breed standards of size and weight. Her confirmation was near perfect and she resembled a Brindle Mastiff/BullMastiff cross to some degree. My father conferred with the Mastiff Kennel Club before introducing her to the Old English Mastiff Breed. After the fact a great degree of controversy developed. Mrs. Moore, a later friend of my fathers and a DuPont, wrote a book on the Old English Breed. She later thought that the introduction of the Dogue of Bordeaux to Mastiff line actually improved the Breed. At far right, Eng. Ch. The Devil From Wayside with offspring. From left, Ch. Daredevil of Hollesley, Ch. Devil Dancer of Hollesley and Ch. Devil’s Advocate of Hollesley.
“An interesting side note was that she was an adult dogue and did not understand English. It took her several months to learn English command. She was a beautiful dog. We loved her.”
A couple of clarifications are in order: Mastiff doyenne Marie Moore was many things, but a DuPont was not one of them. (Her daughter later married into a modest branch of that famous family, likely leading to that confusion.) There is no such thing as the “Mastiff Kennel Club” – perhaps this is a reference to the parent club, though it is unlikely any breed club at the time would sanction a crossbreeding. And while Fidelle is in many Mastiff pedigrees, she is by no means in all of them.
Over the years, Mastiff mavens have talked to the younger Campbell about Fidelle (his father died in 1987), in particular about the description of her as a brindle, which is, of course, a non-standard color in the Dogue de Bordeaux, and unlikely to have come out of such a high-profile kennel. He reportedly stood by his memories of her as being striped.   Whatever her color or pattern, this much remains true: Fidelle was but one in a series of genetic drop-ins that contributed to the diversity of the Mastiff – as well as to the frustration of its breeders, whose job it is to battle the type-defying traits they brought in tow.
© Modern Molosser Magazine. This article may not be reposted, reprinted, rewritten, excerpted or otherwise duplicated in any medium without the express written permission of the publisher.
Sun, 09/06/2015 - 10:50pm