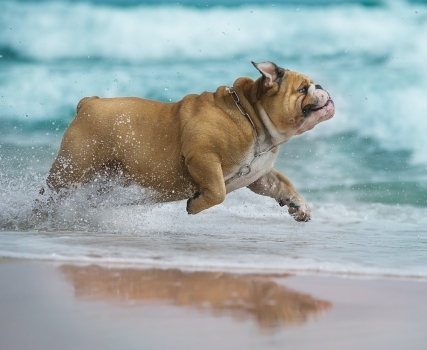 Actually, Bulldog influence is not always something to celebrate in Molossers
By
Denise Flaim

By their very nature, Bulldogs are tenacious. If your raison d’etre for centuries was grabbing raging bulls by the nose, you’d be, too.

Though the blood sport of bull baiting died out more than 150 years ago, the Bulldog has of course survived – and so have its genetics. It’s a cliché among dog people that all those traits that are very wrong in almost any other breed are desired in the Bulldog, from the wide shoulders to the high rear, and everything in between.

And to understand just how powerfully persistent those physical attributes are, generation after generation, look at the Molossers. 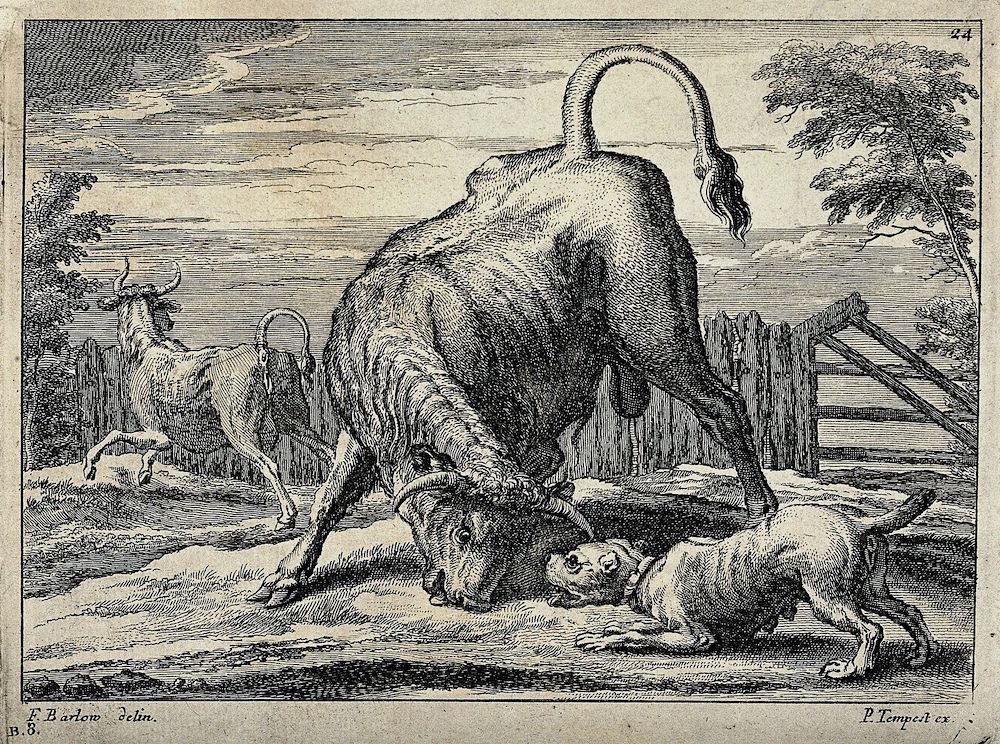 The blood sport of bull-baiting depicted in a 17th-Century etching by Francis Barlow. A broad, undershot jaw for holding and a low center of gravity were vital for success on the part of the dog.

When 19th-Century types like Samuel E. Moseley decided to cross Mastiffs and Bulldogs to create the Victorian progenitor of the modern Bullmastiff, it was in truth more a reunion than a first-time encounter. In the Middle Ages and earlier, Bulldogs and Mastiffs were essentially one and the same, with Bulldogs first being mentioned as a specific breed only in the 1600s.

But there’s no need to go back four centuries to find the Bulldog influence in our Molossers. The Bulldog’s unique head construction – in particular its upsweep of jaw – are desired in those Molosser breeds whose job description involves grabbing and holding. As a result, when many Molosser breeds were either created or stabilized in the late 19th and early 20th Centuries, Bulldogs were a logical and convenient cross, bringing in great substance and bone as well as wide and powerful muzzles. 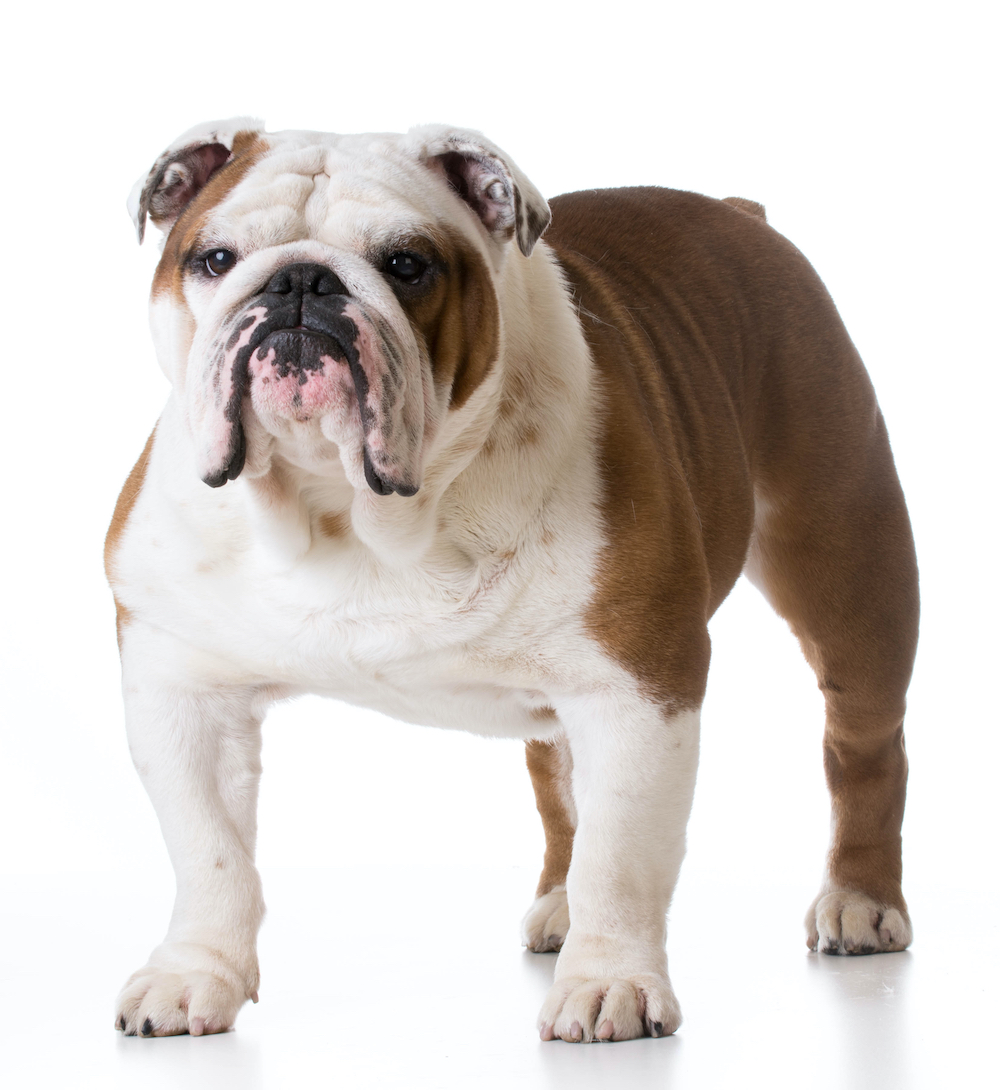 Among the desired qualities sought for in most crosses to Bulldogs include heavy bone and substance relative to size; breadth of body, head and muzzle. Other qualities -- such as the wide- and low-set eyes and layback of nose -- may or not be desired, depending on the breed in question.

While the Bullmastiff is the most obvious example of this cross-pollenation – the Bulldog even has a foothold in its name – it isn’t the only one.

The Dogue de Bordeaux is arguably a Molosser that flirts more aggressively than most with the Bulldog idiom, from its front-loaded body to its broad chest, which is let down lower than the elbows. The Dogue’s distinctive “sour mug” expression hinges on the Bulldog’s contributions – namely, the pronounced layback of both chin and nose, and wide-placed eyes. 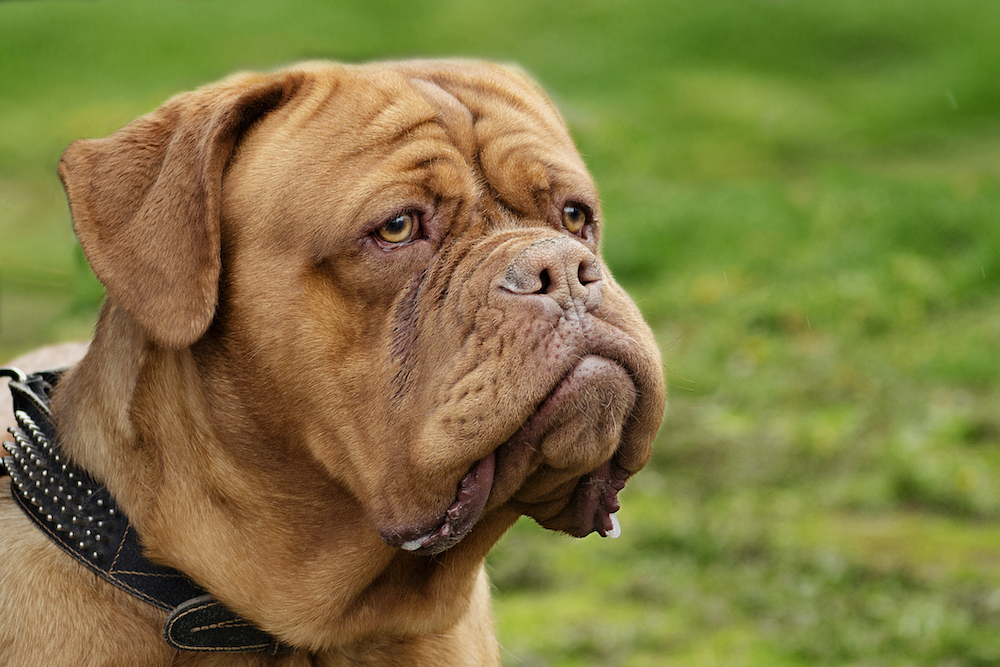 So much of the head type in a good Dogue de Bordeaux -- the wide-set eyes, broad muzzle, upsweep of chin and layback of nose -- is attributable to the Bulldog.

There is, of course, always too much of a good thing. In both Bullmastiffs and Dogues, Bulldog type can get so amplified that it begins to overtake their own breed characteristics. It’s no coincidence that kinked tails are a disqualification in Dogues, Neapolitan Mastiffs and Cane Corsos. Other problems that can creep up include extremely overshot mouths (including visible incisors jutting out when the mouth is closed – a fault in Bulldogs as well), rounded heads, excessive wrinkle and toplines that dip behind the withers and towards of the rear of the body arches in a perceptible "wheel back." 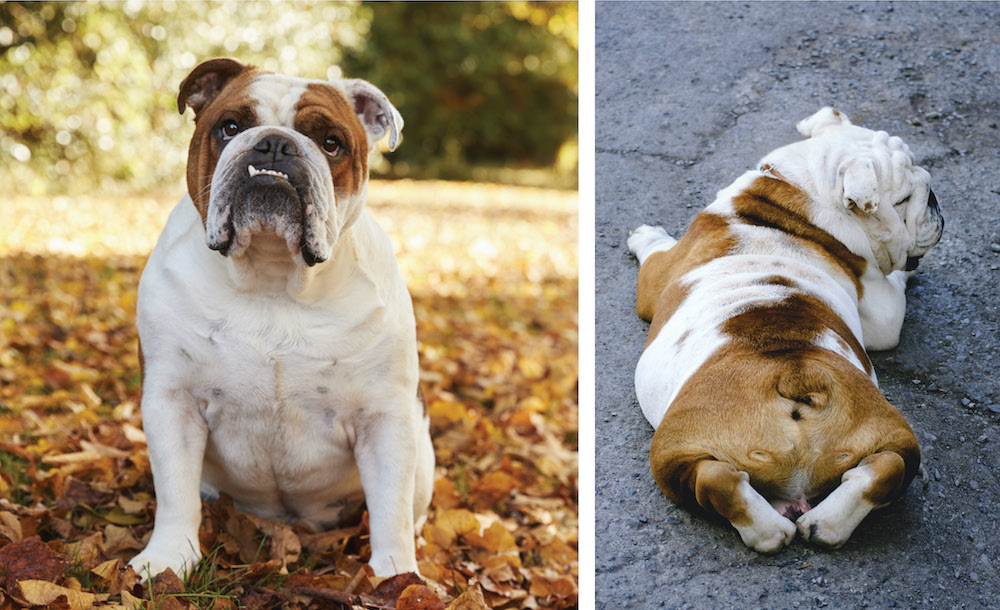 Above left: Breadth of jaw, in which the Bulldog excells, is a fundamental characteristic in many Molosser breeds, which is why Bulldog blood was introduced into so many of them. But there can be too much of a good thing: Mouths that are so undershot that the teeth or tongue is visible are undesirable in all Molossers, and in the Bulldog itself. Above right: The Bulldog's screwtail is genetically transmitted -- and the reason why "knotted and laterally deviated or twisted" tails are disqualifications in many Molosser breeds.

Bulldog influence is arguably the explanation for those frustratingly dippy toplines in both Cane Corsos and Dogo Argentinos. Both breeds received infusions of Bulldog blood via the Bullmastiff (in Europe at least) and the Bull Terrier, respectively. (Those assertions of Dogue blood behind the Dogo appear to be speculative at best.) And judges of both breeds can attest that Bulldog-inspired front assemblies – including bowed, cabriole legs and barrel ribs  – are altogether too often seen in the ring.

Above: Topline is a distinctive characteristic of the Bulldog. According to the FCI standard, "the spine should rise to loins (top higher than top of shoulder), curving again more suddenly to tail, forming slight arch." That describes the Bulldog above, which is correct. Below: That is also the topline that has surfaced in this Dogo Argentino, where such rollercoaster proportions are definitely not desired. Instead, the FCI standard instructs, the topline in the Dogo should be "higher at the withers, sloping gently to the croup," and "seen from the side should not have any depression." 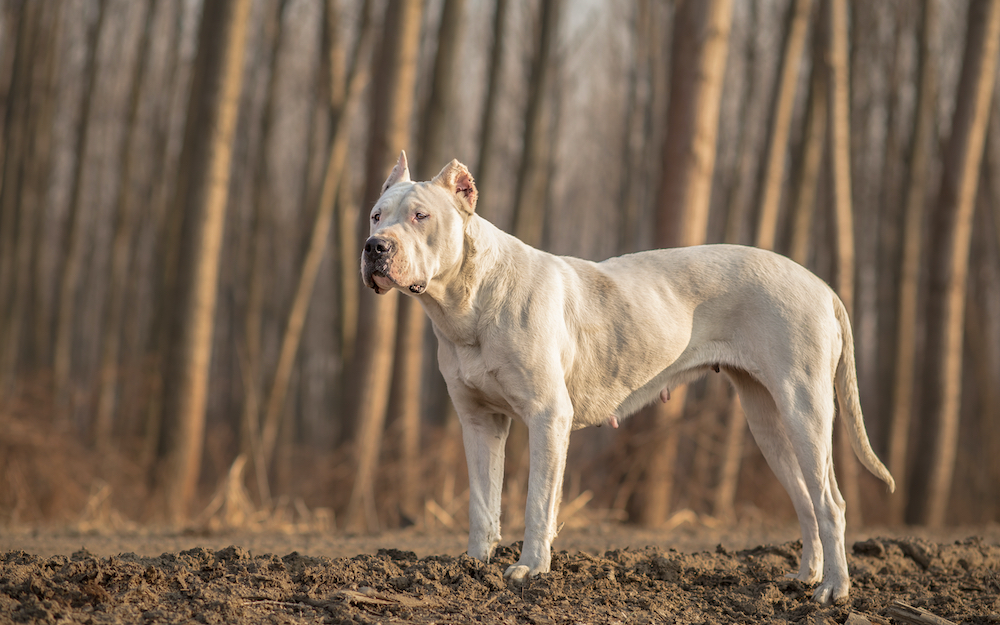 On the plus side of the equation, bone and substance are not the only qualities Bulldog influence imparts to the various Molosser breeds. In the rest of the dog fancy, sloping, well-laid-back forequarters are the Holy Grail of breeding, and are just as painfully elusive. But many Molosser breeds have enviably angled shoulders, and the more compact and Bulldog-like the phenotype, usually the better the shoulder.

Conversely, the taller and relatively rangier the breed – think Mastiffs, Neos, Corsos and Dogos – usually the more difficult it is to find a good, well-angled front assembly.

Frustratingly, these beautiful forehands that are a welcome endowment from the Bulldog are all too often accompanied by stick-straight rears – another trademark trait of those British bull wranglers. And like the Bulldog’s reputation for dogged persistence, they, too, are frustratingly difficult to eliminate.

© Modern Molosser Magazine. This article may not be reposted, reprinted, rewritten, excerpted or otherwise duplicated in any medium without the express written permission of the publisher.
Sat, 12/04/2021 - 11:37am