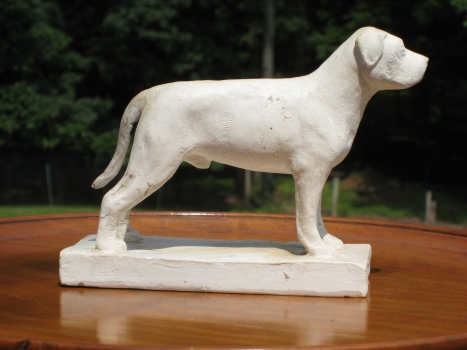 Mastiff in plaster, sculpted by Bolté more than 40 years ago.

Portrait of an Artist

Damara Bolté immortalized Mastiffs on her lead, and in her art
By
Denise Flaim
It was 1947. The woman, who had lived in some 70 countries accompanying her husband, a high-ranking military man, sat on her bed in their quarters at the Fort Monroe, Va., Army post, catching up on correspondence. Occasionally she looked up from the letters she was writing to catch the glint of Chesapeake Bay across the road.
In the stillness of the empty house, she heard a noise downstairs, and decided to investigate. “Better take my pistol,” she thought, approaching the top of the stairs, which descended to the big center hall. Her yearling Boxer bitch, who had been sleeping under the bed, joined her.
“Is anyone there?” she called down. When she saw a flicker of cloth in one of the hall doorways, she fired a warning shot.
Immediately, the intruder fired back, intending to do more than warn. His 45-caliber bullet found the Boxer, who had been standing in front of her mistress. 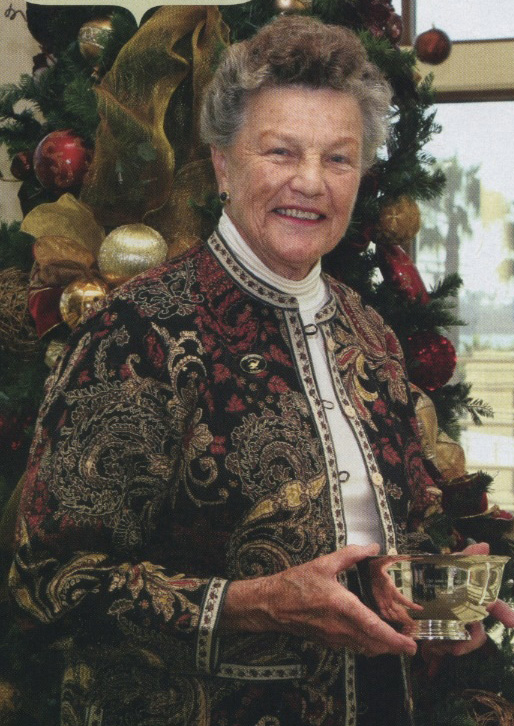 More than a half-century later, that story about her mother, and her beloved Boxer, still bring professional handler and sculptor Damara Bolté to tears. It was also, however, the opening of an important chapter in her life – a lifelong love affair with the gentle but formidable Mastiff.
The intruder was never found, and Bolté's mother, Adelaide, never recovered her sense of security. Soon after, she met her first Mastiff, and was smitten. So on the day in 1956 when her parents moved into their first house after the retirement of her father, four-star general Charles Lawrence Bolté, Bolté brought home a Mastiff bitch they named Pug, formally known as Donaghmore’s Charisse.
“She wasn’t a real big one, but she was the only one available at that time,” Bolté remembers, adding that eventually, every house in their private lane was broken into at least once – except theirs. “Mom thought she was pretty great.”
After Pug died, Bolté acquired another bitch from Marie Moore of the legendary Moorleigh Kennels in Middleburg, Va. Moorleigh Joyce was shown, championed and then bred, producing the first of a half-dozen or so Mastiff litters that Bolté bred under her well-known Reveille prefix. 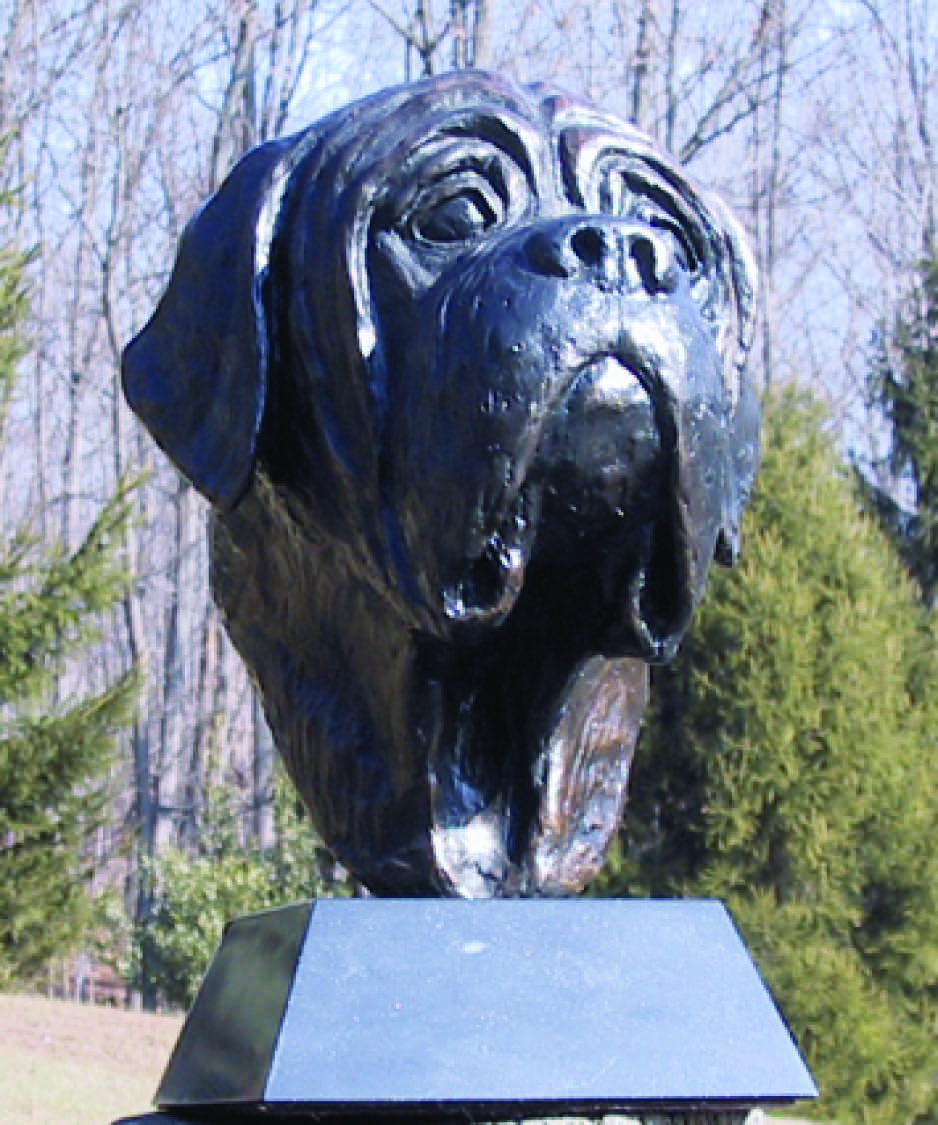 Cast bronze Mastiff head sculpted by Damara Bolte, inspired by her male Mastiff, Joey (Ch. Heart’N’Soul’s Big Palooka).
Damara Bolté (pronounced “Bowl-tee”) of Leesburg, Va., is synonymous with Basenjis, those small, stylish hounds from the Congo that she helped establish and then reinvigorate in this country. But Mastiffs have always been a part of her life, and continue to be: She owns three, ranging in age from 6½ to 11½.
“When I lost my last Mastiff to cancer, I thought ‘I’m done with big dogs,’” Bolté remembers. But when her friend Arlene Bruno succumbed to complications from cystic fibrosis in 2003, Bolté took in her trio of Mastiffs: elder stateswoman “Abby” (Castlemount’s No Bones About It), her 9½-year-old son “Joey” (Ch. Heart’N’Soul’s Big Palooka), and a 6½-year-old apricot brindle bitch, “Mosie” (Ch. Messiah’s Grt Mosaic).
During the 1980s and 1990s, Bolté showed a succession of well-known Mastiffs. “It’s a big, strong dog, and if they’re not inclined to help you, you’d think they had 500-pound heads,” she says of the challenge of presenting these giants to their best advantage. “They’re not like Great Danes – they don’t stand up and look at the world as a rule.” 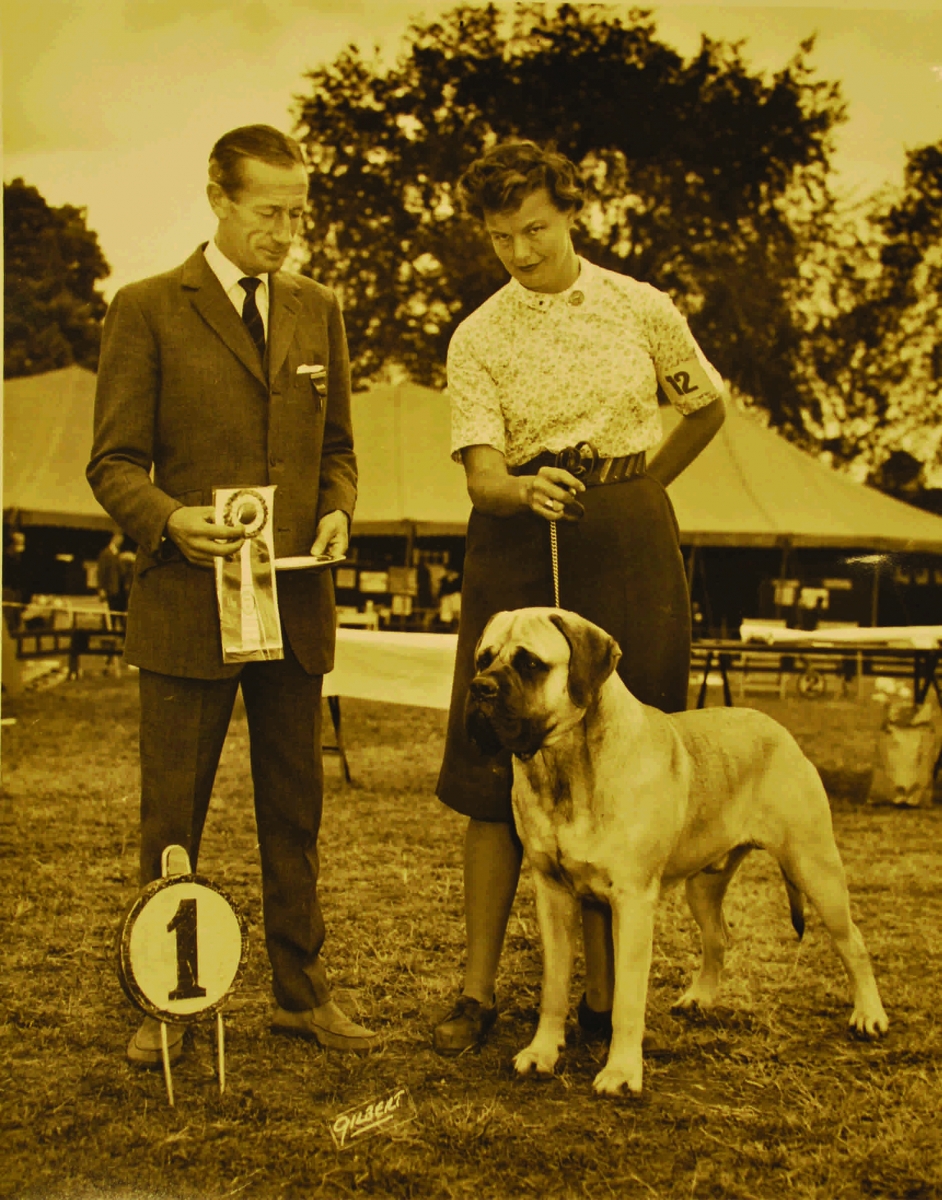 Bolté with Ch. Reveille's Defender shown here going Winners Dog at the 1965 MCOA National specialty under British judge Stanley Dangerfield. Photo: Gilbert.
Perhaps Bolté's most successful charge was BISS BIS Ch. Old School’s Primo Remo Major, who won the 1988 National Specialty (handled to this win by Pam Gilley), and helped breeder Donna Bahlman snag the coveted Breeder’s Cup that year. According to Bolté, during his specials career with her he was the first Mastiff to go Best in Show in the continental United States.
Another favorite of Bolté's was BISS Am/Can Ch. Matts Joshua Dogwood Knoll, who won the National in 1993. 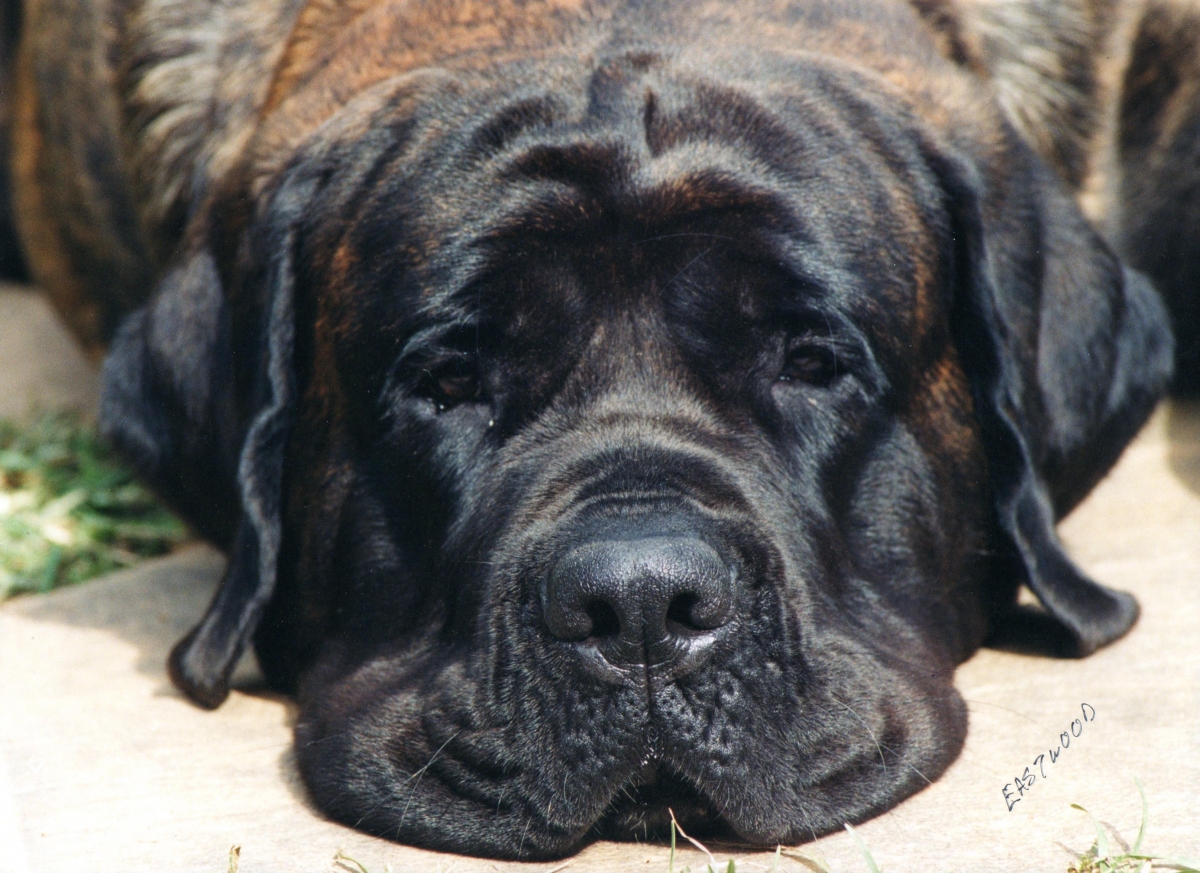 “Mosie” (Ch. Messiah’s Grt Mosaic)
A well-known artist whose private-commission bronzes are coveted by fanciers the world over, Bolté has done two Mastiff pieces. One was a small figural that she did for the late Mrs. Moore, which has only been cast in plaster and now resides at the Museum of the Dog in St. Louis, Mo.
Several years ago, she did a head study, “just for my own pleasure,” using Joey as her model. At the time she started, he was a young dog, and once Bolté put the finishing touches on the piece, she went out to the kennel, reappraised his maturing head, and returned to the wax.
“Mastiffs are at their peak from four years old – they are one of those breeds,” she says of this giant, which is slow to mature and then quick to age. “The bigger you are, the harder you fall.”
But hers, it seems, have no intention of going anytime soon. “They’re really homebodies, and that’s what makes them so nice,” she says. “You can’t beat them away with a stick – not that you would. They really just want to please and be with you.”
© Modern Molosser Magazine. This article may not be reposted, reprinted, rewritten, excerpted or otherwise duplicated in any medium without the express written permission of the publisher.
Wed, 04/04/2018 - 11:59am