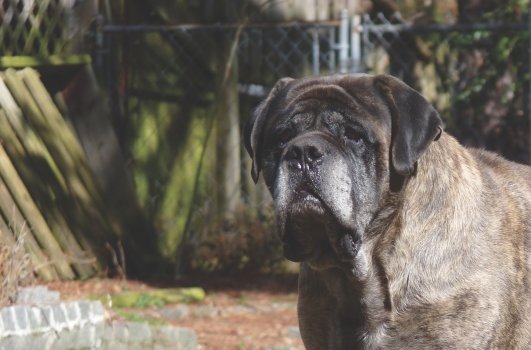 A visual primer on correct Mastiff head type
By
Donna Bahlman and Jessica Bahlman
The AKC Mastiff standard is composed of 1,083 words. Of those words, 445 – or 41 percent – refer to the head.
There is an important reason for this. The head is not a single element. There are a wide variety of variables that go into producing a correct Mastiff head. It’s very rare nowadays to see a truly correct one in the show ring. This is a shame, because what defines the Mastiff is the head, in conjunction with size and mass. Without the correct Mastiff head, a Mastiff can be mistaken for a different breed entirely.
This article is meant to be a point-by-point visual guide to the AKC standard, to help breeders and fanciers translate the words on the page into images of actual heads. Because it is so difficult to meet the standard in every respect, there has never been a “perfect” head. However, we have chosen those photographs that best illustrate specific aspects of the standard, even if they fall short in other areas. We did not want to focus on the negative here, so all of the heads shown represent our standard well, despite some variations.

In general outline giving a massive appearance when viewed from any angle. Breadth greatly desired. 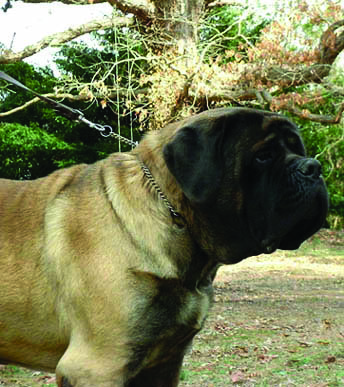 Notice how the dog’s head is nearly as broad and deep as his shoulders. The Mastiff head should not look small compared to his body.
Eyes set wide apart, medium in size, never too prominent. 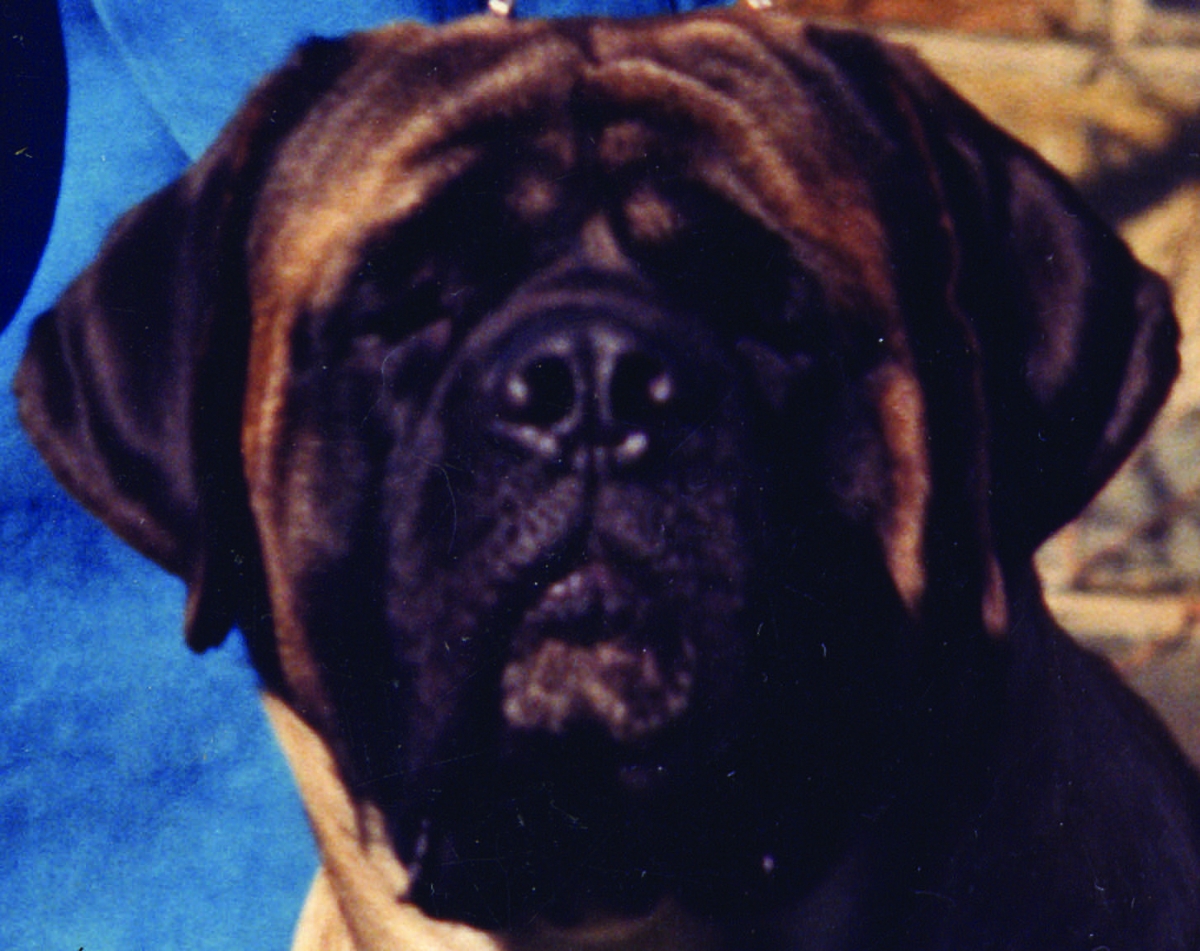 You can see from this photo above that the dog’s eyes are set wider than his sufficiently broad muzzle. If eyes are set too close together, they can make a head look pinched and narrow. Also noteworthy are this dog’s excellent mask and ear color.
Expression alert but kindly. Color of eyes brown, the darker the better, and showing no haw. Light eyes or a predatory expression is undesirable. 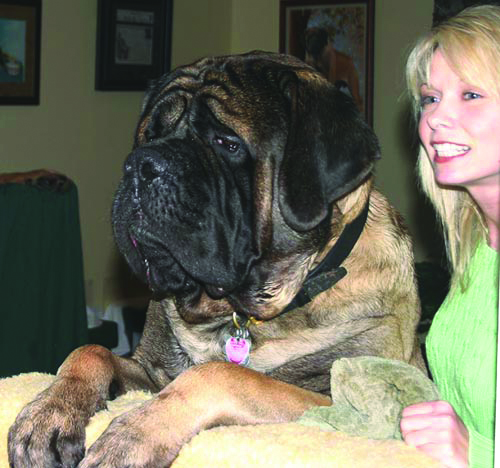 The dog’s expression above exhibits the “grandeur and good nature” that are the bedrock of the Mastiff temperament.

Ears small in proportion to the skull, V-shaped, rounded at the tips. Leather moderately thin, set widely apart at the highest points on the sides of the skull continuing the outline across the summit. They should lie close to the cheeks when in repose. Ears dark in color, the blacker the better, conforming to the color of the muzzle.

Correct ears, shown on two different dogs from the front and side. The dog at left is shown with gray on his muzzle due to age, which should not detract from the evaluation of his head or mask.
Skull
Skull broad and somewhat flattened between the ears … 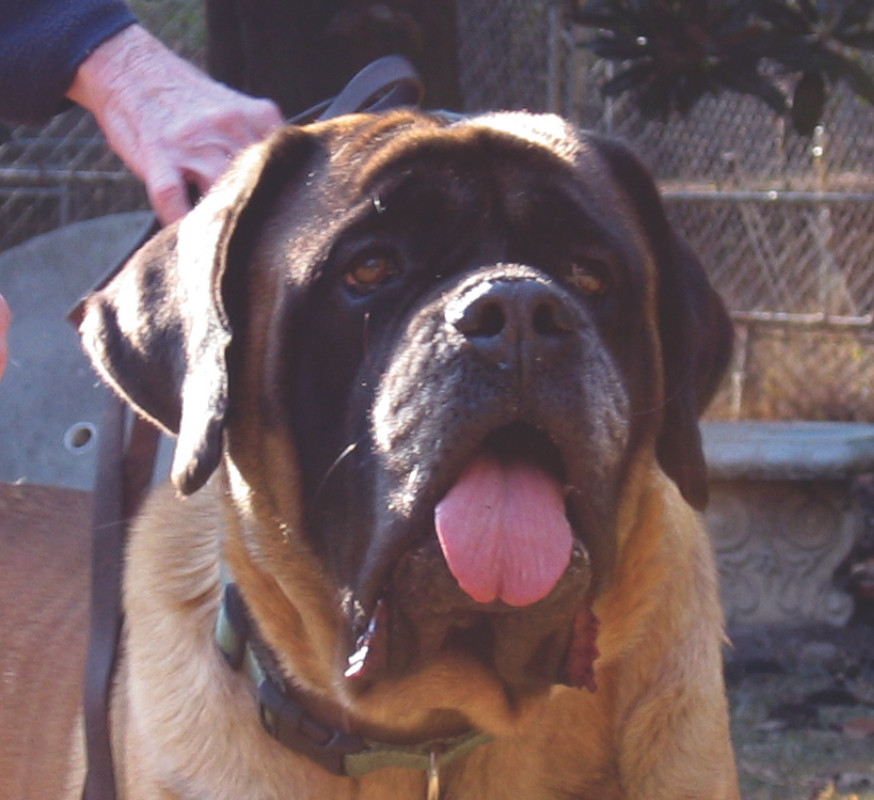 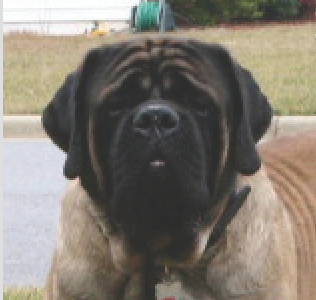 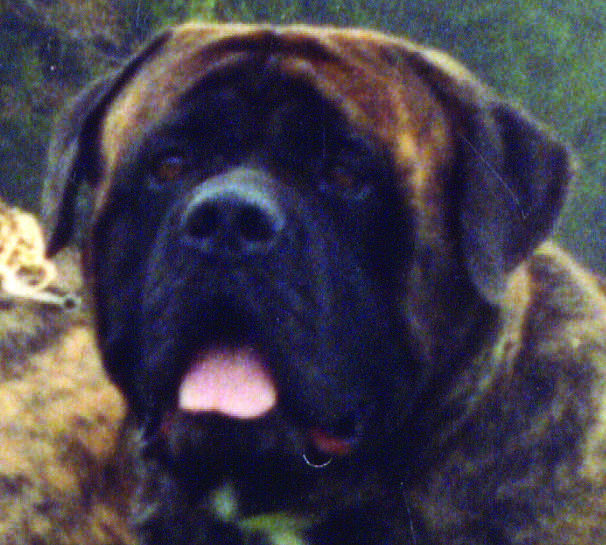 All three photos above show broad, flat skulls. The top photo shows a bitch.
Bitches should not be excluded from rigorous application of the standard. A good head “for a bitch” is a fallacy. A good head is a good head – a head that conforms to the standard.
… forehead slightly curved, showing marked wrinkles which are particularly distinctive when at attention. Brows (superciliary ridges) moderately raised. 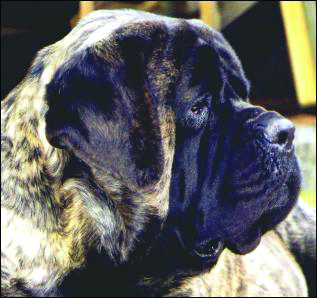 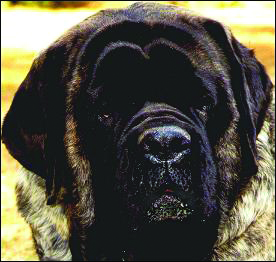 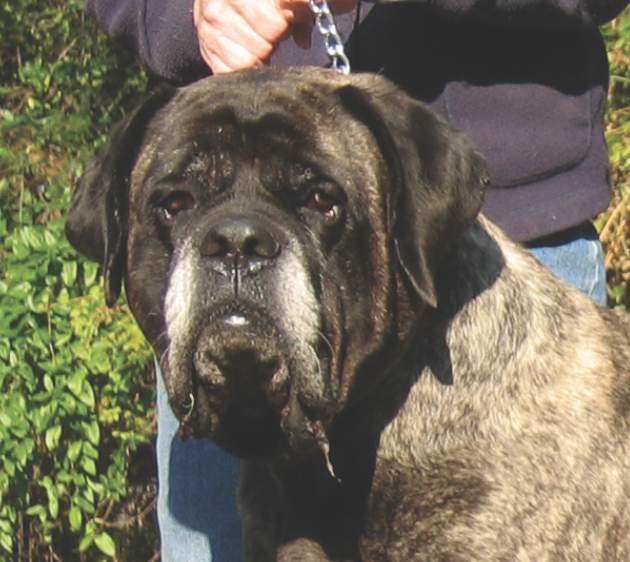 In the photos above, the first two represent one bitch, and the last, another. Focus on the area above the eyes but between the ears, and notice how these two bitches exhibit somewhat different looks, but both depict the correct forehead shape. Also notice the moderation of their wrinkle. You see the raised brows and marked wrinkles, but not to excess. Excessive wrinkle can detract from the true Mastiff expression and hide the bone structure of the head.
Muscles of the temples well developed, those of the cheeks extremely powerful. 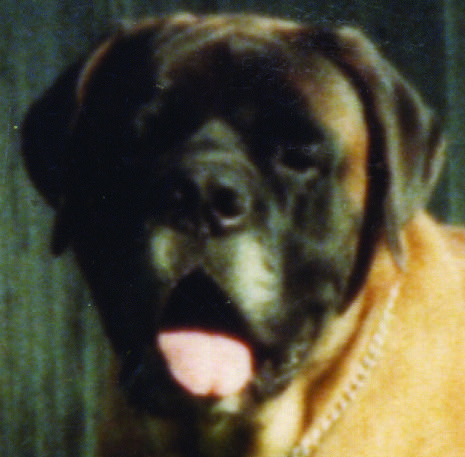 The area around the temple should be firm to the touch. Cheek skin folds are not a substitute for a muscular temple and cheek.
Arch across the skull a flattened curve with a furrow up the center of the forehead. This extends from between the eyes to halfway up the skull. 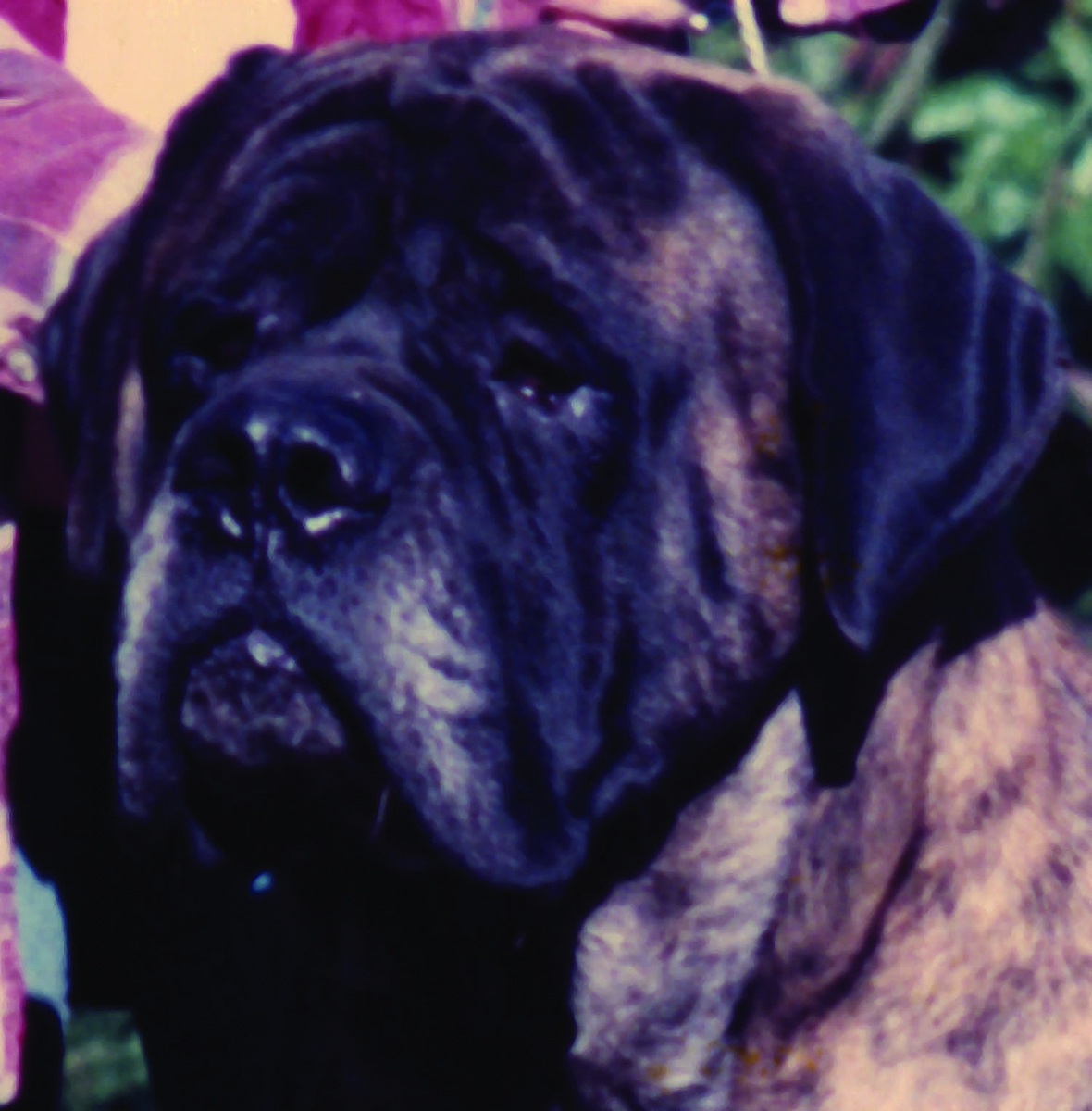 Here we see the flattened curve of the arch across the skull. Notice how the moderate wrinkle allows for a furrow that reaches halfway up the skull, not all the way up, which can be the case in excessively wrinkled individuals.
Stop
The stop between the eyes well marked but not too abrupt. 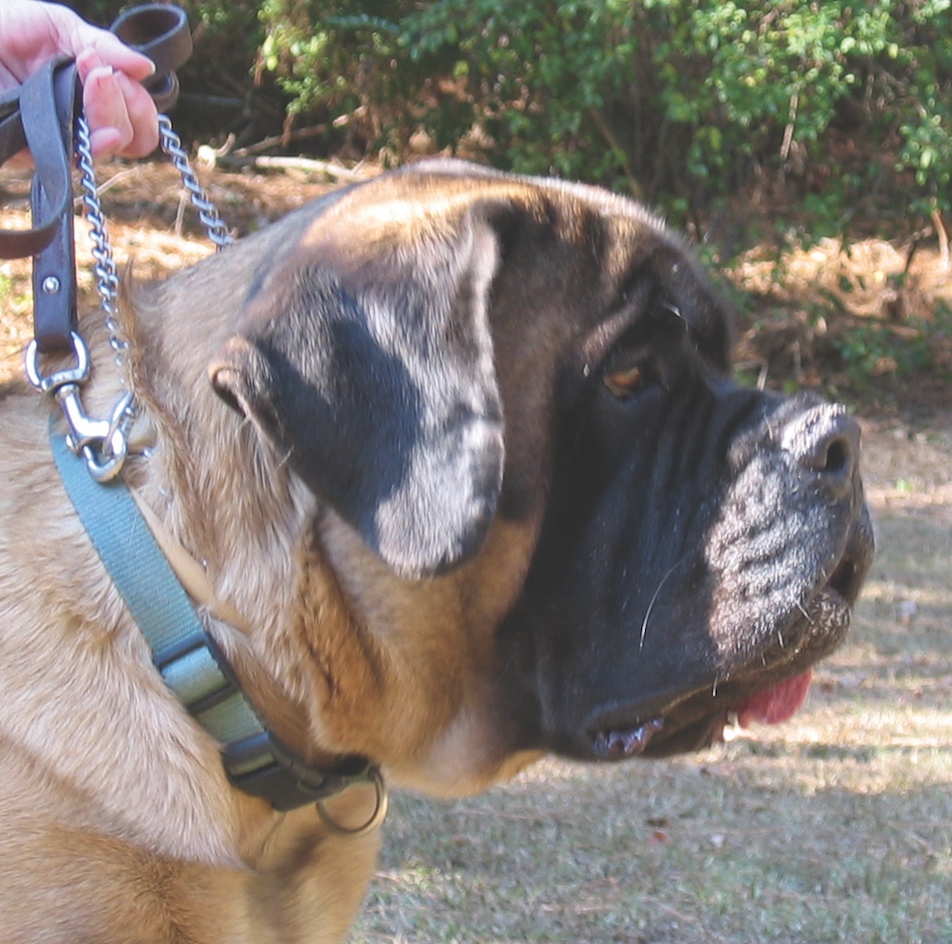 This photo shows a view of the stop on a bitch from the side. You can clearly see the obtuse angle that the muzzle makes with the skull. 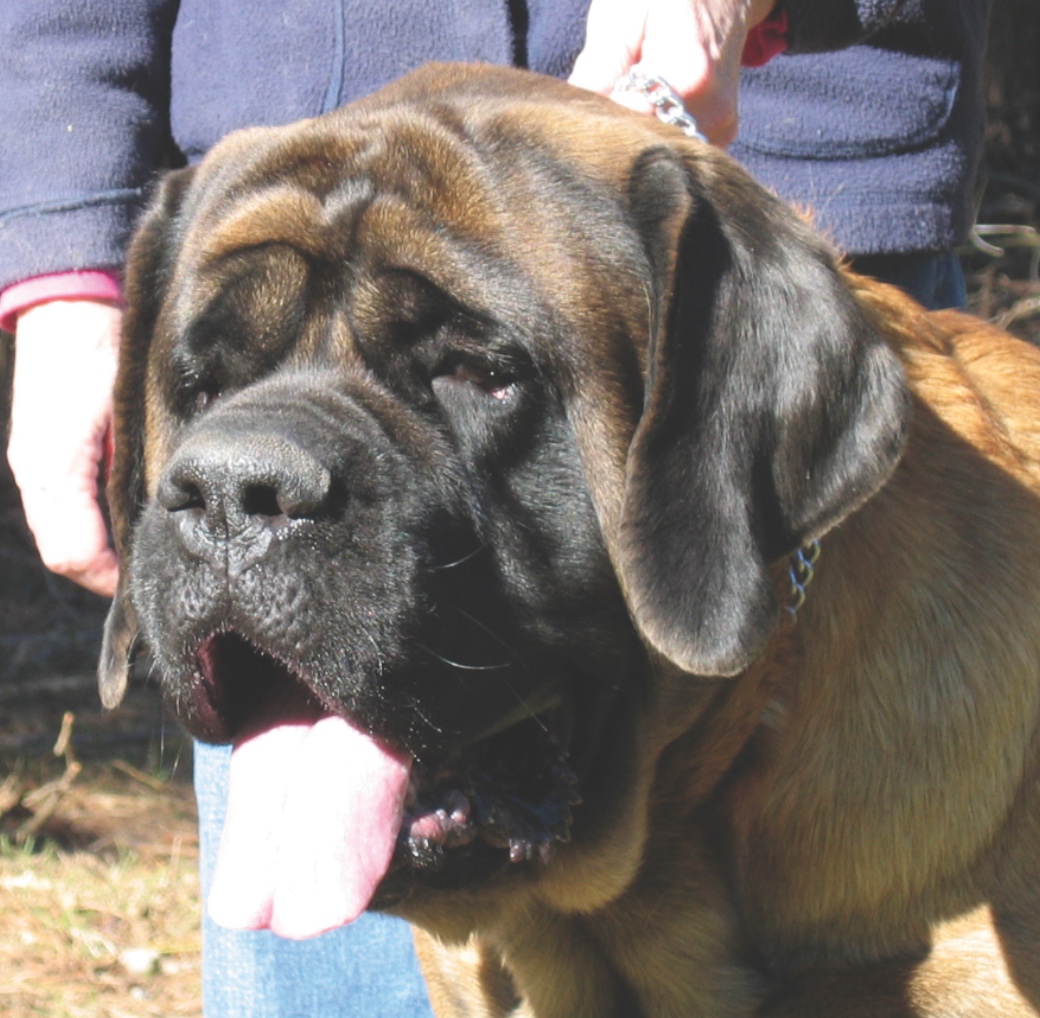 In this photo, the stop is shown on a different bitch from the front, where, again, the angle is clearly visible. It is much more common to find Mastiffs with stops that are too shallow rather than too abrupt. A shallow stop spoils the proportions of the head.
Muzzle 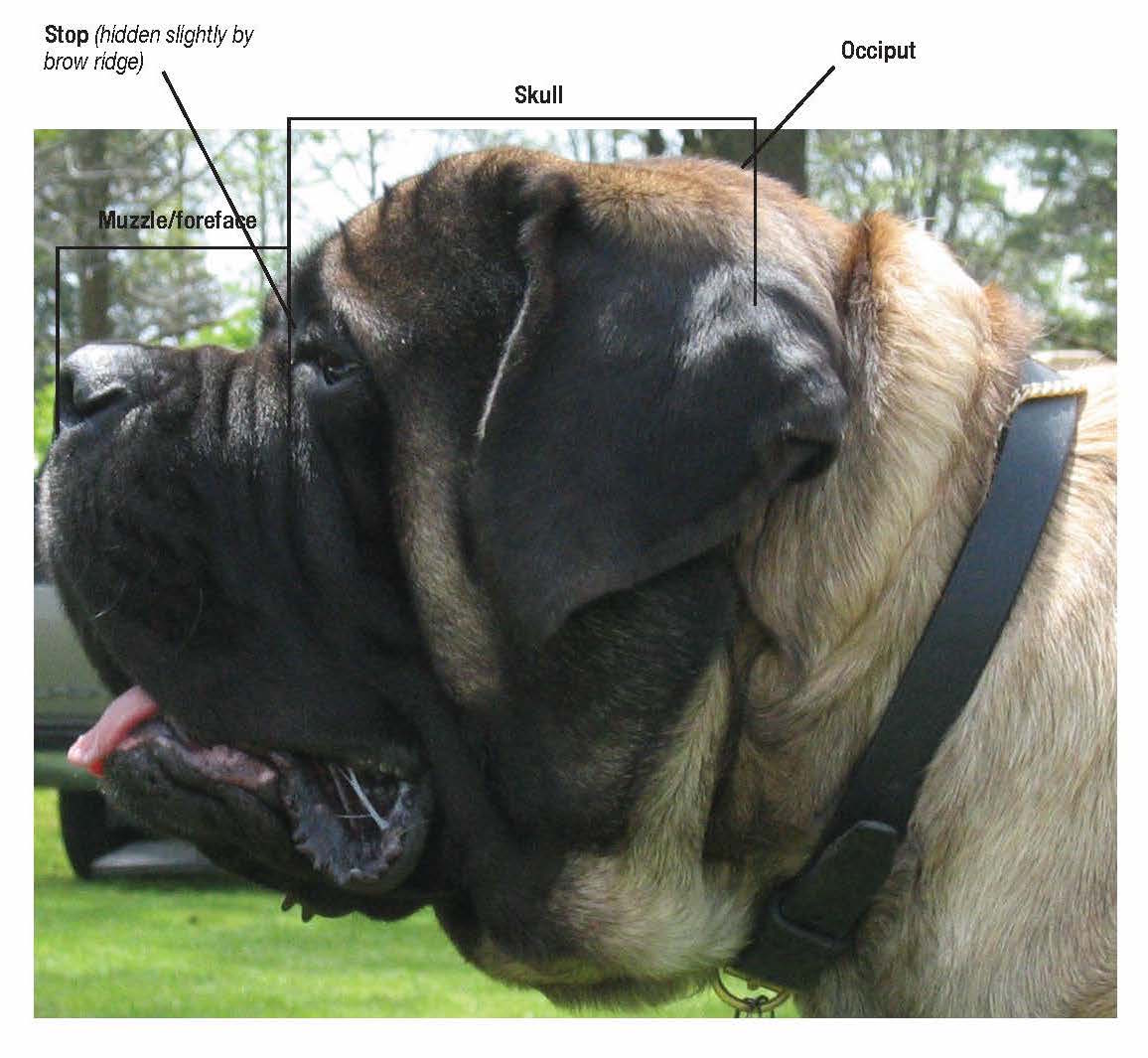 Muzzle should be half the length of the skull, thus dividing the head into three parts – one for the foreface and two for the skull. In other words, the distance from the tip of the nose to stop is equal to one-half the distance between the stop and the occiput.  (See photo above) Circumference of the muzzle (measured midway between the eyes and nose) to that of the head (measured before the ears) is as 3 is to 5. (See photo below.) 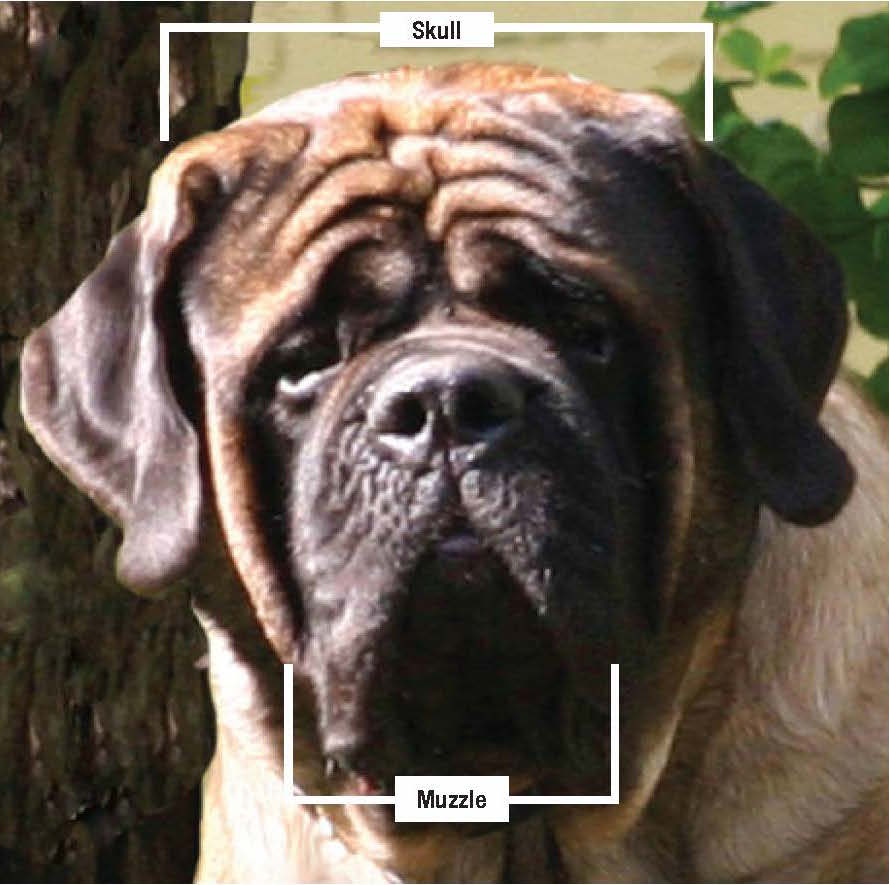 Both these photos show correct muzzle-to-skull proportions in breadth, depth and length.
Muzzle short, broad under the eyes and running nearly equal in width to the end of the nose. 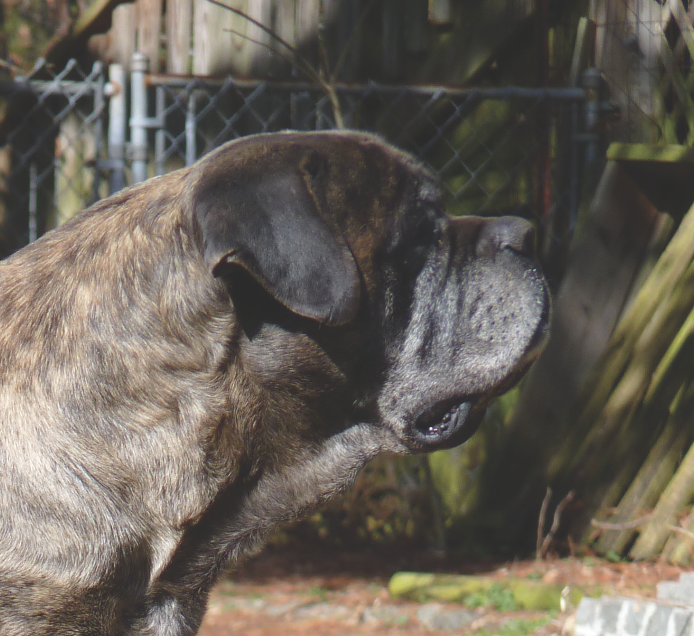 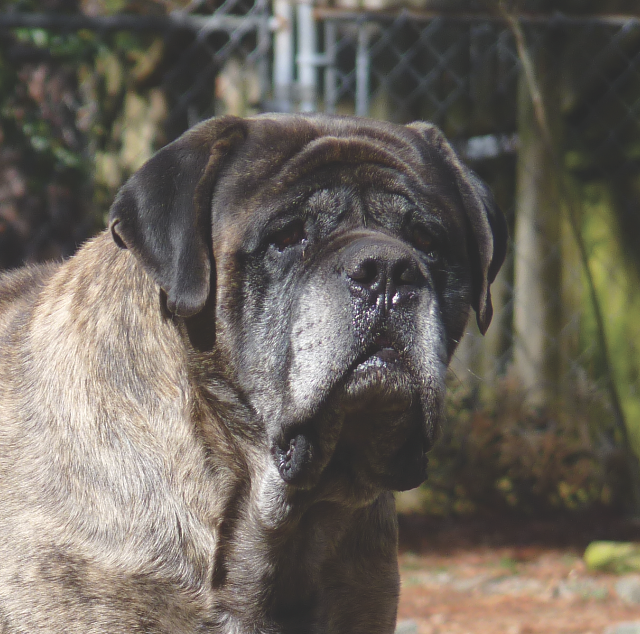 In the two photos above of the same dog, you can see a muzzle that is correct in length and breadth, and how the muzzle maintains breadth throughout. We are finding fewer and fewer dogs who maintain muzzle breadth through the length of their muzzle. Roman noses, hose noses and snipey noses are not correct. Broad, flat and square throughout are the desired traits.
Truncated, i.e. blunt and cut off square, thus forming a right angle with the upper line of the face. Of great depth from the point of the nose to the underjaw. 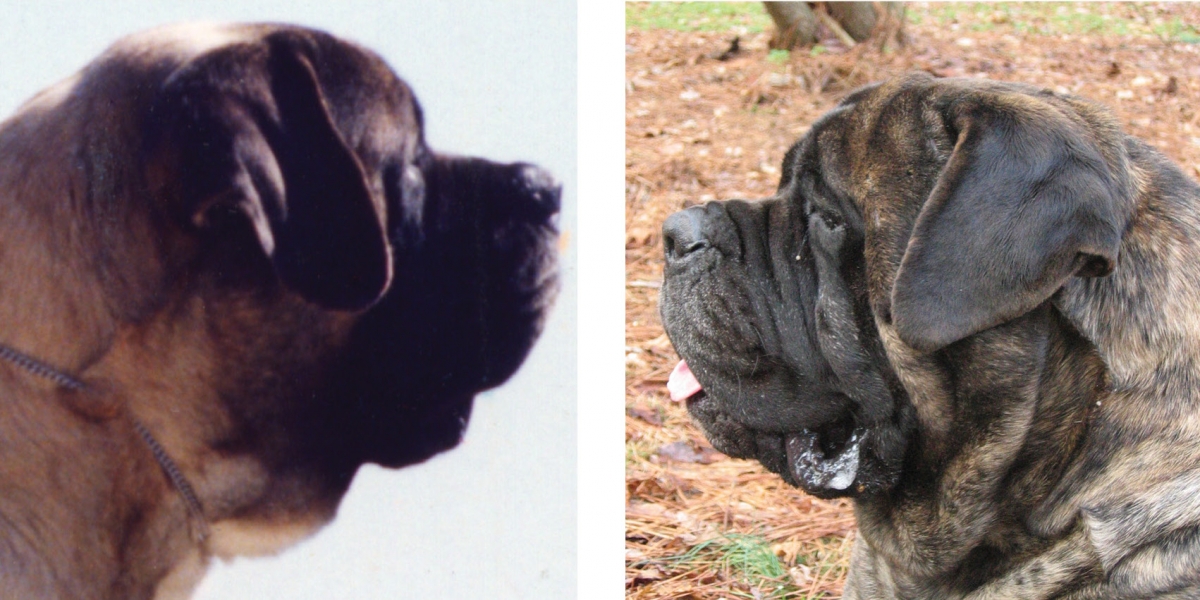 In these two photos you see correct, flat, truncated muzzles at right angles with the face. Incorrect muzzles will appear pointed or will bulge out, rounded below the nose. The depth of muzzle is apparent from the side and is vital to a correctly proportioned, massive head.
Underjaw broad to the end and slightly rounded.

These photos show a bitch (left) and a dog (right) with a correct underjaw.
Muzzle dark in color, the blacker the better. 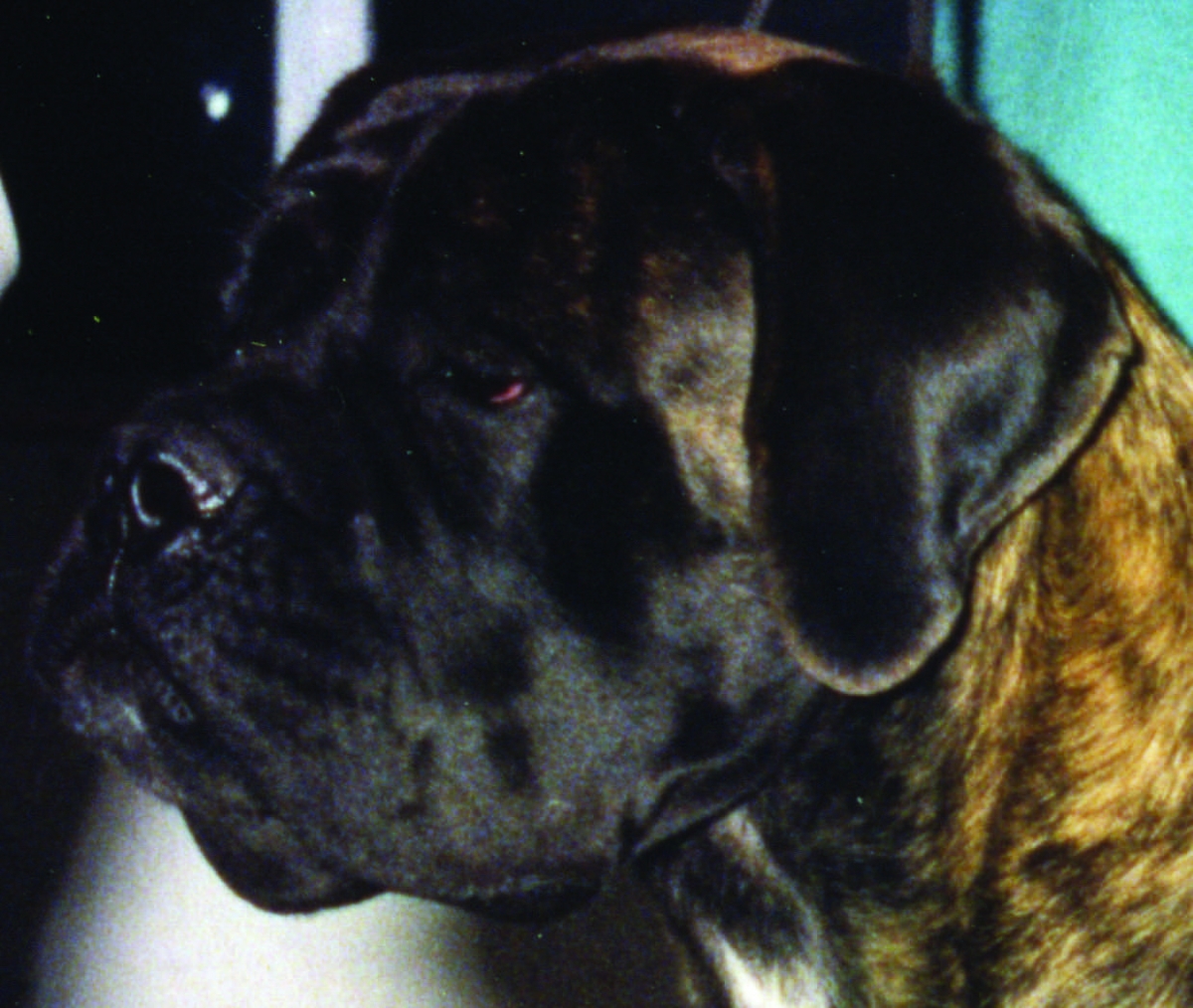 An incorrect mask can ruin expression and the overall look of the head. The black mask is a defining aspect of our breed and should be highly sought after. This photo depicts a bitch with an exceptionally dark mask and ears.
Fault snipiness of the muzzle. Nose broad and always dark in color, the blacker the better, with spread flat nostrils (not pointed or turned up) in profile. Lips diverging at obtuse angles with the septum and sufficiently pendulous so as to show a modified square profile. 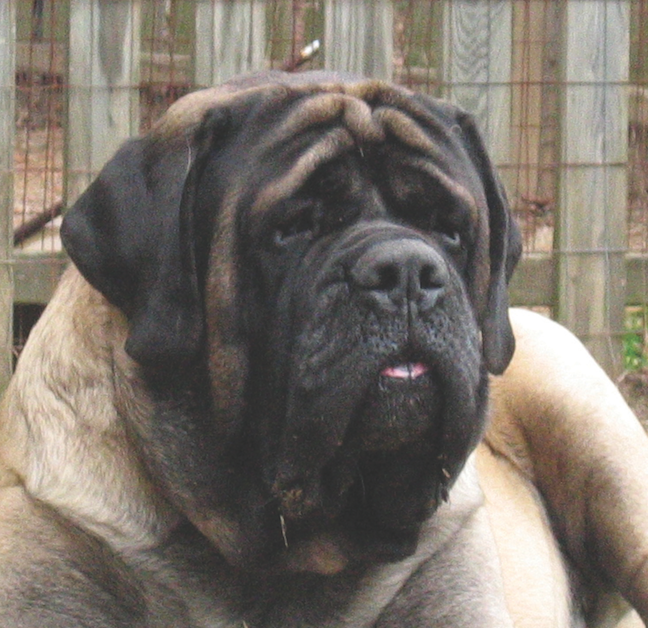 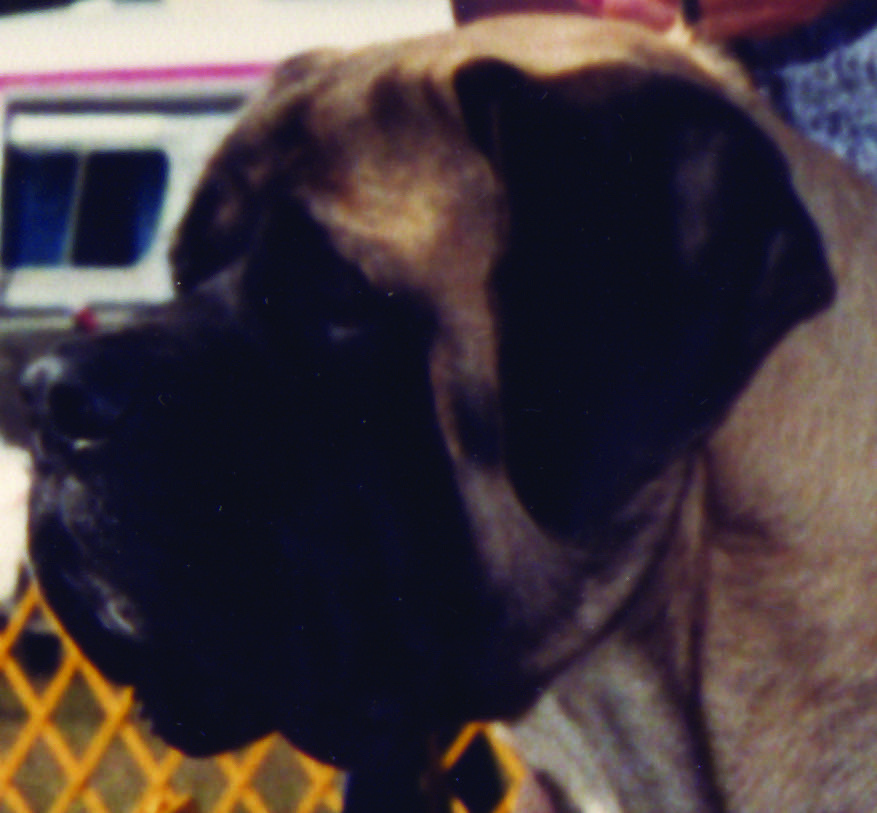 In these last two photos, you see a broad nose with correct nostrils and correctly diverging lips. While lips need to be pendulous to show a square profile (as in bottom right photo), lips that are too pendulous will show a more rectangular profile, causing the muzzle to appear narrow.
Canine Teeth healthy and wide apart. Jaws powerful. Scissors bite preferred, but a moderately undershot jaw should not be faulted providing the teeth are not visible when the mouth is closed.
Many people misinterpret the Mastiff standard as requiring a scissors bite. It is merely preferred. Undershot bites are acceptable so long as no teeth show when the mouth is closed.

We hope that this visual interpretation of our standard will benefit breeders and judges alike. Looking at a head, or at photos of a head, can never tell the whole story. One must lay hands on a head, feeling the underlying bone and muscle, to make a true evaluation. There are many things that can give the illusion of correct head type (light, angles, wrinkle and skin); however, the bone and muscle never lie.
We consider the head to be a very important part of our breed and encourage others to understand this as well. We need to take the time to study each dog’s head, and to really compare it with the standard as it is written. A good head is not one trait, but rather the harmony of multiple traits combined together to form the structure of a correct head.
About the Authors
Donna Bahlman has been breeding Mastiffs for more than 35 years. She has produced many champions and two Mastiff Club of America National Specialty Best of Breed winners, as well as one Best of Opposite, one Best of Winners and multiple Award of Merit winners at MCOA National Specialties. She has also produced Group-placing Mastiffs and a Best in Show Mastiff.  Her daughter Jessica grew up in the whelping box, helping to breed and show, and is continuing the line.
© Modern Molosser Magazine. This article may not be reposted, reprinted, rewritten, excerpted or otherwise duplicated in any medium without the express written permission of the publisher.
Sun, 03/25/2018 - 5:45pm