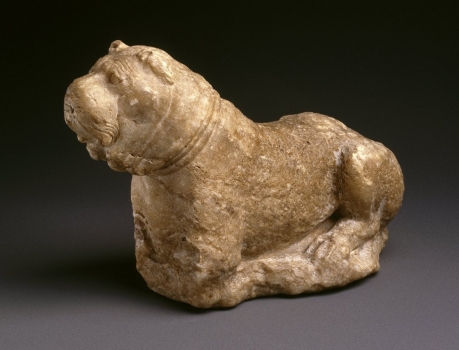 Does the World Need Another Molosser Breed?

Marcus Curtis, creator of the ‘American Molossus,’ thinks so
By
Denise Flaim

Anyone arguing for authenticity in purebred dogs is asking for a perch atop a slippery slope – and then a good shove from behind.

After all, no dog breed sprang from the head of Zeus completely formed. All breeds have ghosts in their respective closets, from cases of mistaken identity to intentional crossbreedings to fudging of pedigrees. And arguably just writing a breed standard triggers the observer effect, in which the very act of seeing a phenomenon changes it. After all, if you’re a gamekeeper busy tracking poachers, who has time to write a description of your ideal Bullmastiff? No, the time for that is when the great age of your grand dogs has passed, their function subverted, and the coin of the realm nostalgia.

That said, the act of creating a new breed is a controversial one, with the operant question being: Why? There are already more than enough half-baked “designer Molossers” on the internet, from the Mastador (a Mastiff-Labrador Retriever cross, natch) to the American Mastiff (basically, a Mastiff diluted with Anatolian Shepherd, to create a drier mouth) to the North American Mastiff (a pastiche of seemingly every Molosser breed imaginable, with some merle Danes thrown in for good measure). And in the realm of the theoretical, there is the Mollosso Presa Mayo -- no, not the latest specialty cocktail at TGI Fridays, but rather a misspelled "concept breed" that envisions a Bull Terrier-headed creature with the proportional morphology of a rhino. 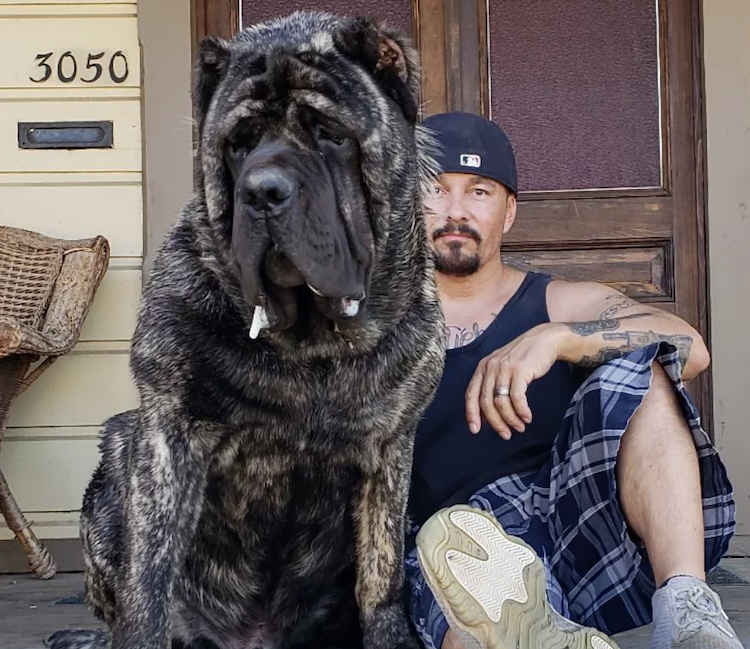 Marcus Curtis with Sasquatch, a first-generation cross between a Neapolitan Mastiff and a Mastiff. Curtis plans to use the cross as the basis of a new breed called the American Molossus.

Against that backdrop, it's more than fair to ask: In the pantheon of heavy-headed, heavy-boned Molossers, do we really need a Neapolitan Mastiff leavened with Mastiff blood? That is essentially the recipe for the much-publicized American Molossus, which has been featured everywhere from the New York Post (“Bark from the Dead” shouted the tabloid headline) to the London Mirror to the History and Science cable channels.

Marcus Curtis of Old World Mastinos in Southern California maintains that his American Molossus is not a new concept, but rather a re-creation of an ancient one. On his website, Curtis winds the clock back to 5,000 BCE, “a time where people were nomadic, barbaric, and when they wanted land, riches, steel and even people, they would just take it.” It was “a dark time and a time where people needed to have defense,” the website intones. “They needed something that would protect the women and children left behind while men were hunting or at war. They needed comfort and peace of mind. They needed The Molossus.” 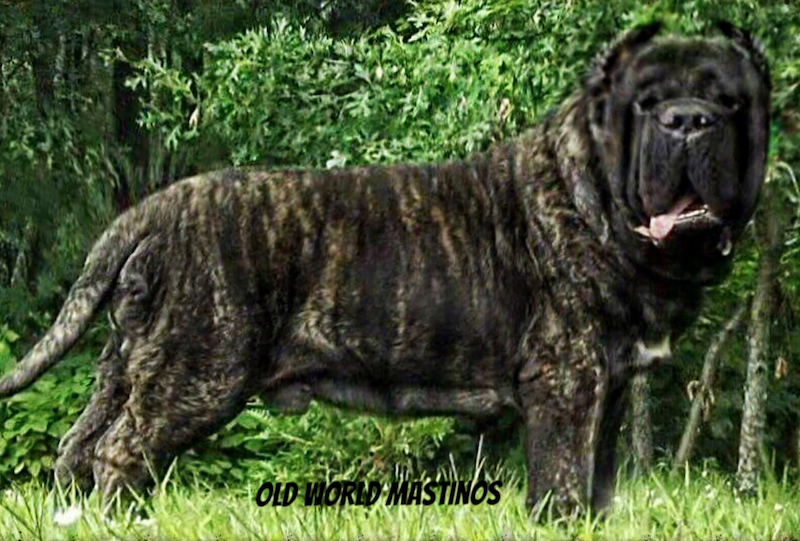 A rendering of the American Molossus by Chad Mayo, who is also the eponymous creator of the Mollosso de Mayo.

Curtis envisions his American Molossus as a “super sized Neapolitan Mastiff” that is able to guard in close quarters, is more intelligent and less dog aggressive than the Neo currently is, and is also conformationally sounder, in particular with a strong and well-developed rearquarters.

Describing himself as “an avid breeder who likes to study,” Curtis bred Rottweilers in the 1990s and got involved in Neapolitan Mastiffs almost 20 years ago, before the breed was AKC recognized. Curtis says the template for his “resurrected guardian” is the crop-eared, dewlapped, broad-headed dog depicted in those ancient artworks, like the hollow terracotta Molosser from the 2nd millennium BC that now resides in the Metropolitan Museum of Art. “I was pretty fascinated with the original Molossus from Mesopotamia and Sumeria,” he says. “I got enamored with it. It was effective then, and it can be effective now.”

Thick with hyperbole but short on actual facts, newspaper articles like the recent one in the Times Mirror proclaim that the American Molossus is “selectively bred to be the closest genetic descendent of the Mesopotamian Molossus.” Actually, no. Recent DNA evidence has debunked this persistent myth of one archetypal Molosser from which all others derive. Instead, we now know that different geographic regions spontaneously gave rise to similar categories of dogs, from Molossers to Sighthounds. In theory, a Neapolitan Mastiff is more genetically similar to another Mediterranean breed such as the Cirneco dell’Etna than it is to a Mastiff or Bullmastiff, which in turn is more closely related to other canines from the British Isles, whether a Greyhound or a Border Terrier.

In short: There was no Ground Zero for mastiff-type dogs in the ancient world.

The wrinkled terracotta dog that has captured Curtis’ imagination, then, is but one documented iteration of the Molosser. One can just as easily – and factually – re-create this canine of antiquity along the lines of the Jennings Dog, a statue that is a Roman-era copy of the Greek Molossus. While clearly well boned and substantial, this athletic-looking Molosser evokes a wolf, in contrast to the lion-like Mastino. Why should the latter claim the mantle of the true historical Molosser? 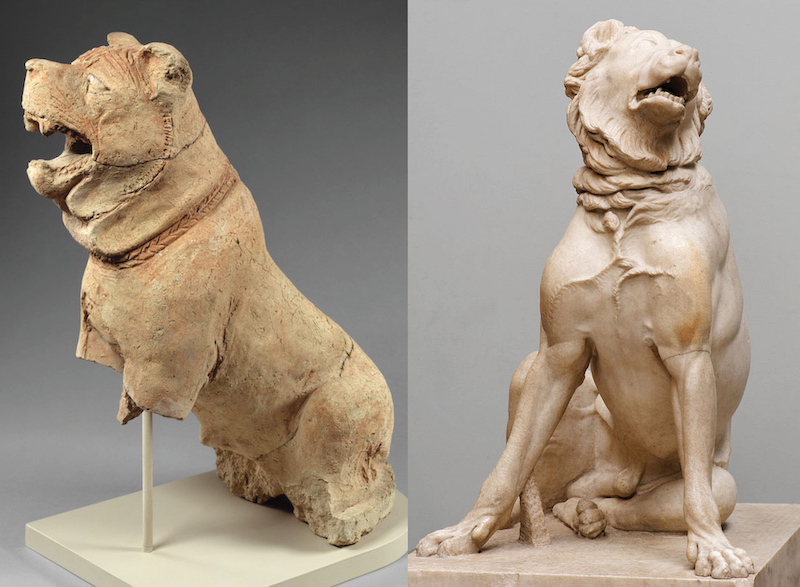 Two Molosser idioms: Above left, a Mesopotamian statue that has the physical features we associate with a modern Molosser. Above right, the Jennings Dog, a lighter-bodied Molosser.

“They are two different type dogs that are both from same stock,” Curtis says when asked about the difference between the beefy terracotta dog and his Italian-carved marble cousin. While acknowledging that “the argument that one is original is irrelevant – they both probably were,” he says he aims to breed “the bigger, heavier dog that would be left behind to defend” – not the handier, more athletic dog that would accompany the pillaging legions.

But, arguably, modern dogdom already has a breed to act as a stand-in for that beefcake Molossus of old, and Curtis already breeds it – the Neapolitan Mastiff.

In essence, Curtis says, he is seeking to engineer “a different Neo” – one that is larger, less dog aggressive, longer lived and better structured. The obvious answer would be to do that within the confines of the breed’s gene pool, which Curtis says he tried to do, but ultimately hit a wall trying to breed out aggression against other animals. “I did as much as I could with multiple generations of my own Neos,” he says. “I had multiple discussions with people who did crosses, and that’s what made me to take the final leap.” 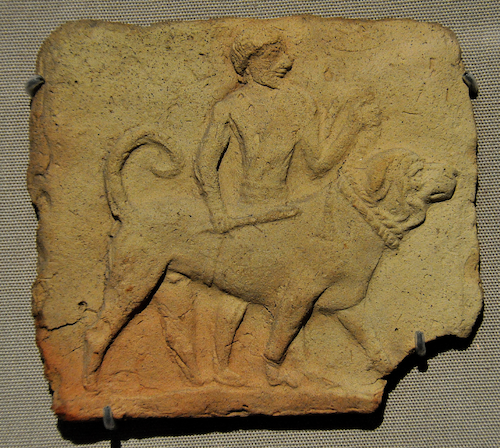 Another contrast between these two vestiges of the ancient Molosser: Above, a heavy-bodied Molosser, complete with dewlap, depicted on a Mesopotamian tablet, 2000-1600 BCE. Below, a dog statue guarding a tomb an archeological site in Kerameikos, Athens; his build evokes the Jennings dog. 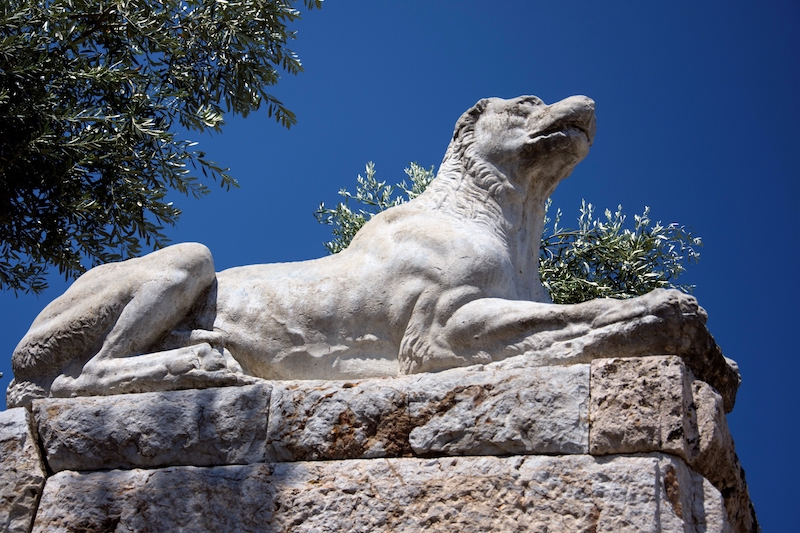 Curtis says he started doing research on Neapolitan Mastiffs overseas that had been crossed with Mastiffs and Dogues de Bordeaux, and found them to be “larger, more intelligent and more robust.”

“I’ve been following Mastiffs for a long time, and their longevity is 10 plus years,” he says. By contrast, “Neos average six,” and many die even earlier. “They say Mastiffs are gentle giants – all the hardness has been bred out of them. They really are very soft,” bringing him closer to his goal of a dog-tolerant Molosser.

Perhaps not surprisingly, there has been vocal opposition to Curtis’ American Molossus project from fanciers in both breeds. “To do anything, you’ve got to take risks,” Curtis shrugs, adding that he is inundated with phone calls from prospective buyers. He says that breeders from as far away as Australia and Morocco have approached him about being involved with the development of the American Molossus.

Jared Howser of Dark Mountain Mastiffs in Salt Lake City, Utah, is one of them.

Smitten with bully breeds as a child, Howser has owned Cane Corsos and Presa Canarios. Initially, he went to Curtis for a Neapolitan Mastiff. “I agreed 100 percent with his desire for an animal that was bigger, strong and healthier, with a stronger back end and better temperament,” he says. “And I do like that the wrinkle will be taken back a bit. So I told Marcus to switch my deposit from a Neo to an American Molossus.”

Howzer took home a dark brindle bitch puppy named Euphrates, who today at nine months old weighs 180 pounds. Even as a puppy, her “instinct was on point,” he says. “I’ve never seen a dog so smart – we crate-trained her with not a single mistake. Her appetite is huge. And her instinct to guard the kids is what we really like.”

Hastening to add that Curtis’ project is “not ‘The Island of Dr. Moreau,’” Howser says he expected blowback with this newfangled breed. “I understand that there are some people who are going to be uncomfortable with change, others who are such strong proponents of the Neo that’s they’re going to have a problem with the idea of the American Molossus, but I hope not,” he says. “I love both breeds, and I agree with Marcus that if you combine two, the functionality and temperament are better all around.”

In the end, the American Molossus arguably raises more question than it answers, among them: Is it possible to truly re-create an ancient icon of the past? Is there enough difference between a Neapolitan and an English mastiff to make the American Molossus a bona-fide breed? If the Neapolitan Mastiff is in such dire need of tweaking, why not simply cross to the Mastiff and then continue to breed Neos, as, quite frankly, some Mastini breeders, past and present, have done with some success?

Experienced breeders would also note that a dog like Euphrates, as an F1, or first-generation offspring of two separate breeds, has the greatest odds of acquiring the desired traits of each parents, the same principle at work in the – shudder – Labradoodle. It’s the next step, the F2 generation resulting from breeding two F1s together, that the breeding gods exact their revenge, persistently withholding consistency and scattering genetic roadblocks like so much kibble.

Perhaps the only definitive thing one can say about the American Molossus is that, clever marketing aside, the proof will be in the pudding. A discernible breed that breeds true is easier said than done. (Just ask the Bandog people.) Not to mention that the myth of the ancient Molossus has survived for millennia precisely because of its ambiguity. The sharper the lines, the greater the criticism, the higher the bar. There might even be an apt metaphor in a comparison with modern-day Molossia, a self-proclaimed -- and decidedly tongue in cheek -- micronation located outside of Dayton, Nevada.

After all, as tempted as we all are by nostalgia, you never really can go home again.

© Modern Molosser Magazine. This article may not be reposted, reprinted, rewritten, excerpted or otherwise duplicated in any medium without the express written permission of the publisher.
Sat, 04/27/2019 - 8:08pm