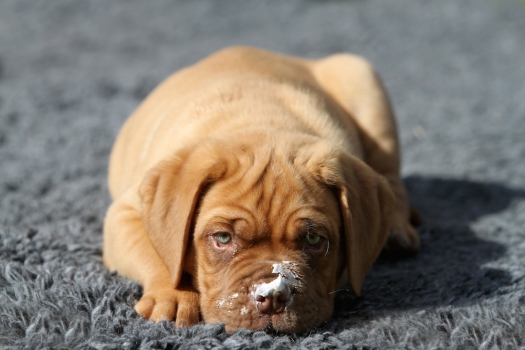 One thing everyone agrees on: This is "unauthorized" white, according to the Dogue standard. Photo: Sanna Sander.

In that Bible that should sit on every Dogue lover’s bookshelf, the Saga of the Dogue de Bordeaux, breed authority Professor Raymond Triquet gives straightforward advice on how judges should deal with white markings in the breed.

“Follow the standard,” he says simply, going on to quote that document, which, in point of fact, he wrote himself: “Non-invasive white marks are permitted on the chest and the extremities of the limbs.” White on the throat is a fault, Professor Triquet continues, while white that creeps up on the chin, neck, head or body is a disqualification –  “but everyone knows that.”

Apparently, everyone does not.

This November, at a dog show in Tucson, Arizona, a Dogue de Bordeaux class dog and bitch were both disqualified for having white on their chests. The following day, a second judge followed suit, again disqualifying the male. (The female was not entered.)

The reaction on social media was swift and furious: Dogue breeders and fanciers announced a boycott of the judges involved, asking rhetorically how such a misinterpretation of the standard could have happened. Indeed, Dogues without some sort of white splotch on the chest are hard to find, and many of the world’s finest Dogues de Bordeaux carry white chest markings. Some, like the celebrated bitch “Skye” (Multi-Ch. Tyrannus Skyjacked by Emberez) arguably even have too much; in her case, a ribbon of white snakes up her throat – but it hasn’t stopped the world’s most respected Dogue judges from showering her with top wins amid the world’s toughest Dogue competition, including at the prestigious French national show, the Nationale d’Elevage. Above: British-bred Skye, whose stripe up her neck never obscured her exceptional quality to those with deep knowledge of the breed. Below: The two Dogues disqualified in Arizona for “excessive” white. The confusion about white stems from contradictory language in both the American Kennel Club standard, and that of the Federation Cynologique Internationale, on which the American standard was closely modeled, with the close input and approbation of Triquet himself. While both standards says markings on the chest and extremities are permitted, they also say that white should not be tolerated anywhere on the body. And the chest, admittedly, is part of the body.

That is the logic that presumably prompted the disqualifications from the two judges in question, Joseph Gregory of Simpsonville, Kentucky, and George Murray of Brooklyn, Michigan, both of whom are experienced adjudicators who come out of the Working Group themselves (Boxers and Dobermans, respectively). Neither responded to emails from Modern Molosser requesting comment on the disqualifications.

But Kris Munday of Camelot Dogues de Bordeaux in Roseburg, Oregon, who did judges’ education seminars for the Dogue de Bordeaux Society of America when the breed was first recognized in 2008, says judges often didn’t take a holistic view of the standard.

“We told judges to read the whole paragraph about color, not just the DQ,” she says. “ Because if you do, it tells you that white on the extremities and chest is acceptable and common.”

Munday says that when the breed was first recognized, dogs with obvious white markings often were penalized. “Basically, the judge would just excuse them, or they wouldn’t get placed, or they’d get put at the back of the line,” she remembers

“There was some confusion about the standard’s wording on white when the Dogue de Bordeaux was first recognized, but here in the United States it has never been a problem since then,” adds Chelsea Conway of Bruin Bordeaux in Temecula, California. “Judges have easily understood that the chest and feet were allowed to have limited amounts of white. In Europe a greater movement toward less white was seen to discourage breeders from allowing dogs that were marked more like Boxers; several breed specialists went out of their way to place Bordeaux with no white. I agree the wording could be a bit more clear on the amount of white that should be accepted, but it clearly states that white is allowed on the chest and feet.” As this litter shows, almost every Dogue de Bordeux has some degree of white marking. Photo: Sanna Sander

Within a week of the Arizona shows, the Dogue de Bordeaux Society of America drafted a letter clarifying the standard’s intent regarding white markings, and sent it to more than 1,200 AKC judges who are licensed to judge the breed, the Working Group and Best in Show.

“The intent of the Standard is that the chest (front part of the body) is not included as part of the body in the breed standard’s text which reads, Disqualification: White on the head or body; any coat color other than shades of fawn,” the letter explained, acknowledging that the standard could do with some wordsmithing to make its intent crystal clear. “If the chest is included as part of the body, it can lead to misinterpretation of the Standard’s intent.” As for the disqualified Dogues, if the male is disqualified once more, for a total of three times, he will be ineligible to compete in American Kennel Club conformation events. A reinstatement request can be submitted, though the non-refundable cost is $50, and the process can take four to six weeks to complete. These two photos accompanied the Dogue parent club’s letter to judges, “demonstrating varying degrees of perfectly acceptable white on the chest and feet.”
More than the lack of fairness to dogs whose white markings do not violate the standard, the disqualifications also leave fanciers and breeders worried about just how well versed judges are in the breed – in particular judges who have been “grandfathered” into judging the Dogue when it was recognized, and as a result did not have to attend any educational events put on by the parent club.
“The judges still don’t know our breed,” Munday sighs. “And that’s sad.”
© Modern Molosser Magazine. This article may not be reposted, reprinted, rewritten, excerpted or otherwise duplicated in any medium without the express written permission of the publisher.
Wed, 12/16/2015 - 4:14pm