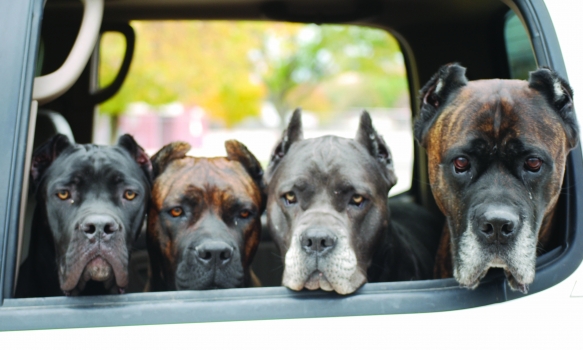 Training a Molosser can sometimes feel like you are working on a Rubik’s Cube. You try matching the colors up to get the perfect dog, and at some point you might have all of them lined up on multiple sides – but when you turn the cube around, the colors just don’t quite match up again.

Molossers are often misunderstood. Everyone wants to believe that their dog is the mightiest out there, that he would protect his family without any reservation. But the truth of the matter is, Molossers are notorious for going through “fear stages.”

Fear stages usually occur between six to 14 months, as dogs enter adolescence. Often referred to as adolescent shyness, these fear periods seem more common in males. Your dog may suddenly become reluctant to approach something new, or be afraid of something that was once familiar – a common, everyday object that a few days ago didn’t faze him. This behavior can be very frustrating to the owner because it comes on so suddenly and often not provoked. 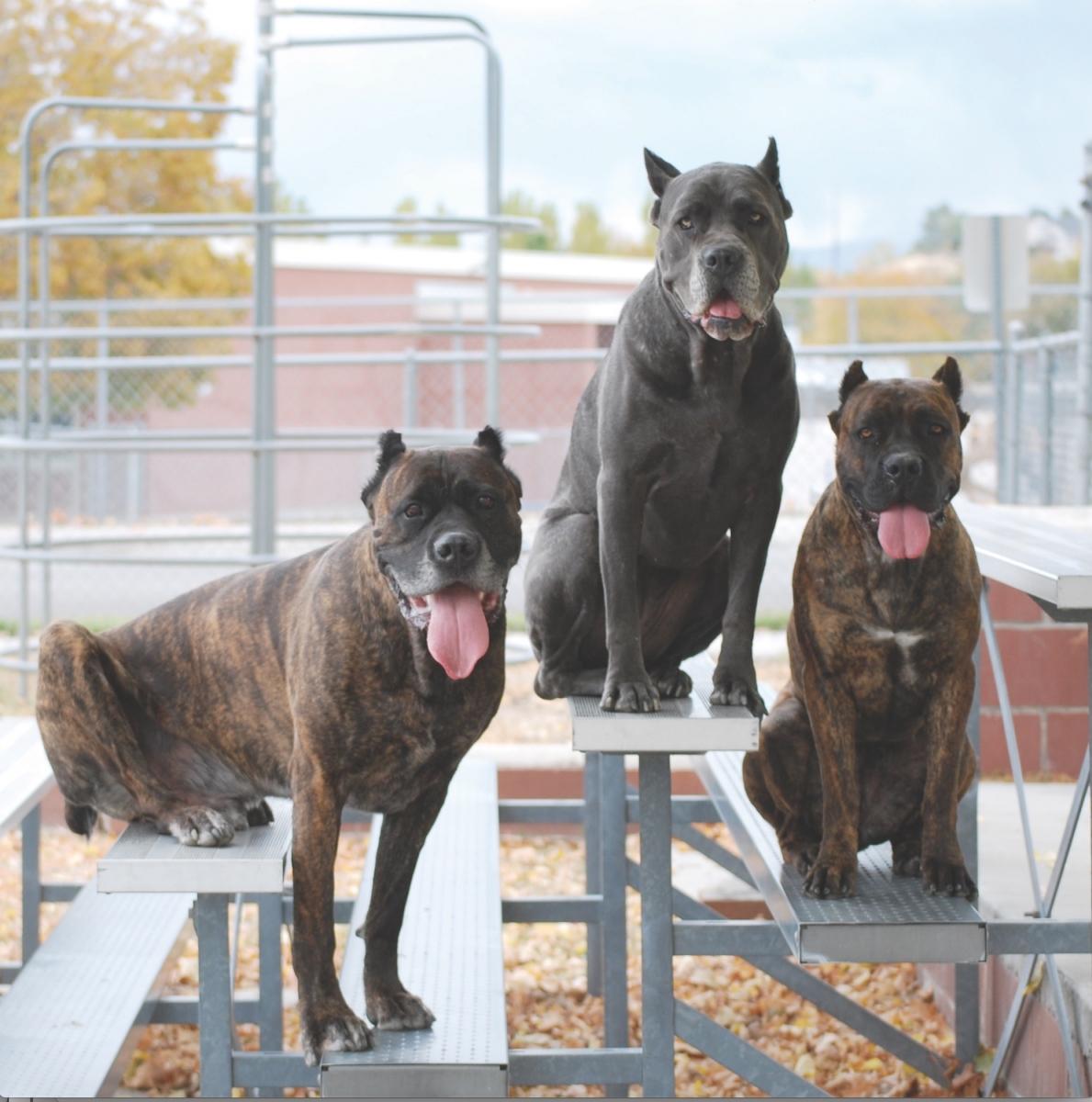 Dealing with fear periods can be difficult. The worst response is to coddle or baby your dog when he reacts this way. Remember, dogs do not experience emotions the way we do. If you coddle your dog when he is scared, you are teaching him that when he is fearful he gets attention; as a result, you will see more fear from him in the future, not less. Be patient with your dog and understand that this behavior will soon pass. You are better off completely ignoring the fear than trying to force your dog to deal with the situation. Your dog needs to trust that you will not put him in a dangerous position.

If the behavior does not pass within a day, put your dog on a leash, grab a handful of treats and casually walk by the “scary” object, slowly getting a little closer until your dog gets more comfortable with the situation. Obedience is key with dealing with any Molosser. Start training early and make it fun. You can have training be fun while still having clear boundaries for the dog.

Many Molossers are known for being aloof with strangers. The definition of aloof is “not friendly or forthcoming; cool and distant.” Keep in mind there is a distinct difference between fear and aloofness. Fear is the most misdiagnosed behavior I see. Often people think because a dog is barking with his hackles up that he is “protecting” them, when in truth that dog would rather run and hide under the bed than defend you.

When under pressure, dogs have a flight or fight instinct. You need to know your dog, and be aware of him in all situations. Knowing how your dog will react in different situations will keep both of you safe. Be prepared for all possibilities, but do not overanticipate; this will only create more issues. Whether your dog is showing fear, dominance or you’re just out for a nice, relaxing walk, your dog looks for you to be his confident and fearless leader.

Obedience is essential for any dog to deal with any situation. Obedience can help a fearful dog feel comfortable and a dominant dog be controlled in all scenarios. Obedience builds trust in every dog and makes owners feel like they can handle their dog in any situation. Now, when I say obedience, I am not talking about having your dog do sits and downs with a treat around minor distractions in the house. I am talking real, everyday-life obedience. You should be able to take your dog to the middle of a busy park, put him in a sit, walk away and have your dog hold the command with distractions all around him. He should be able to walk at your side without forging ahead through a busy crowd. If you are capable of teaching your dog these things on your own, then do not worry about hiring a trainer. But if you need some help, then you need to find a trainer.

Finding a knowledgeable trainer is not always easy. Talk with multiple trainers in your area and find one who you and your dog get along with and can spend many hours with. Here are some questions to ask: 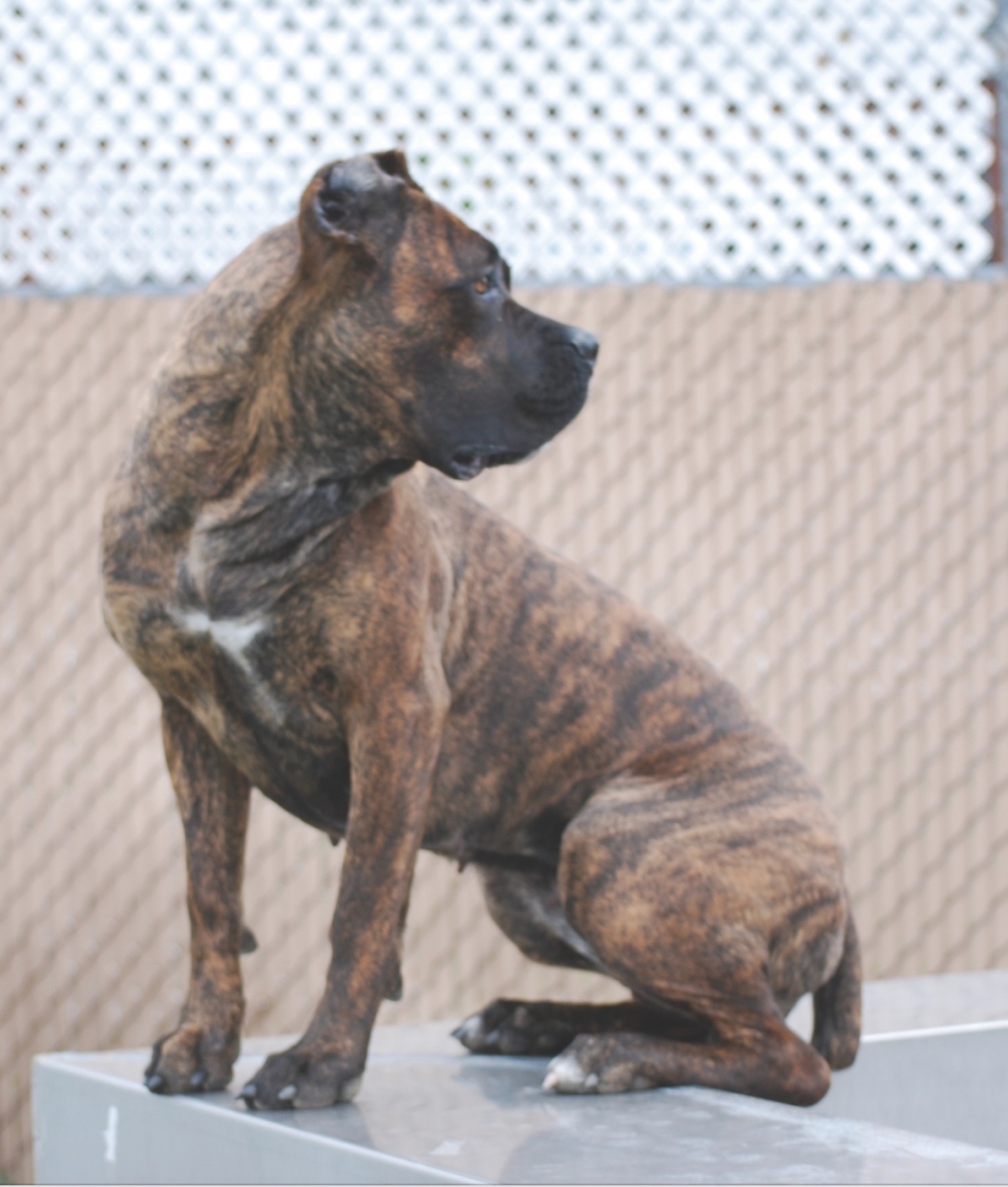 If your dog trusts you as her leader, you can put her on any object or surface.

What type of training methods do you use?

How much experience have you had with “my breed”?

How many years have you trained dogs? Where did you get your training knowledge?

Are you certified and if so, by whom?

Do you have referrals or clients I can talk to?

What services/packages do you offer?

There are no clear black-and-white answers to those questions. Do you and your dog feel comfortable with the trainer? Your trainer needs to be comfortable around large-breed dogs. Molossers tend to mature slowly, so find a trainer who is patient and understanding of this.

Keep in mind that you have a serious working breed, so soft trainers that offer only positive reinforcement might not be ideal for your dog. Dogs interact with each other through a certain level of pack corrections between one another. In dog packs, there is a clear alpha dog. Having clear, consistent boundaries will create a calm, happy dog. 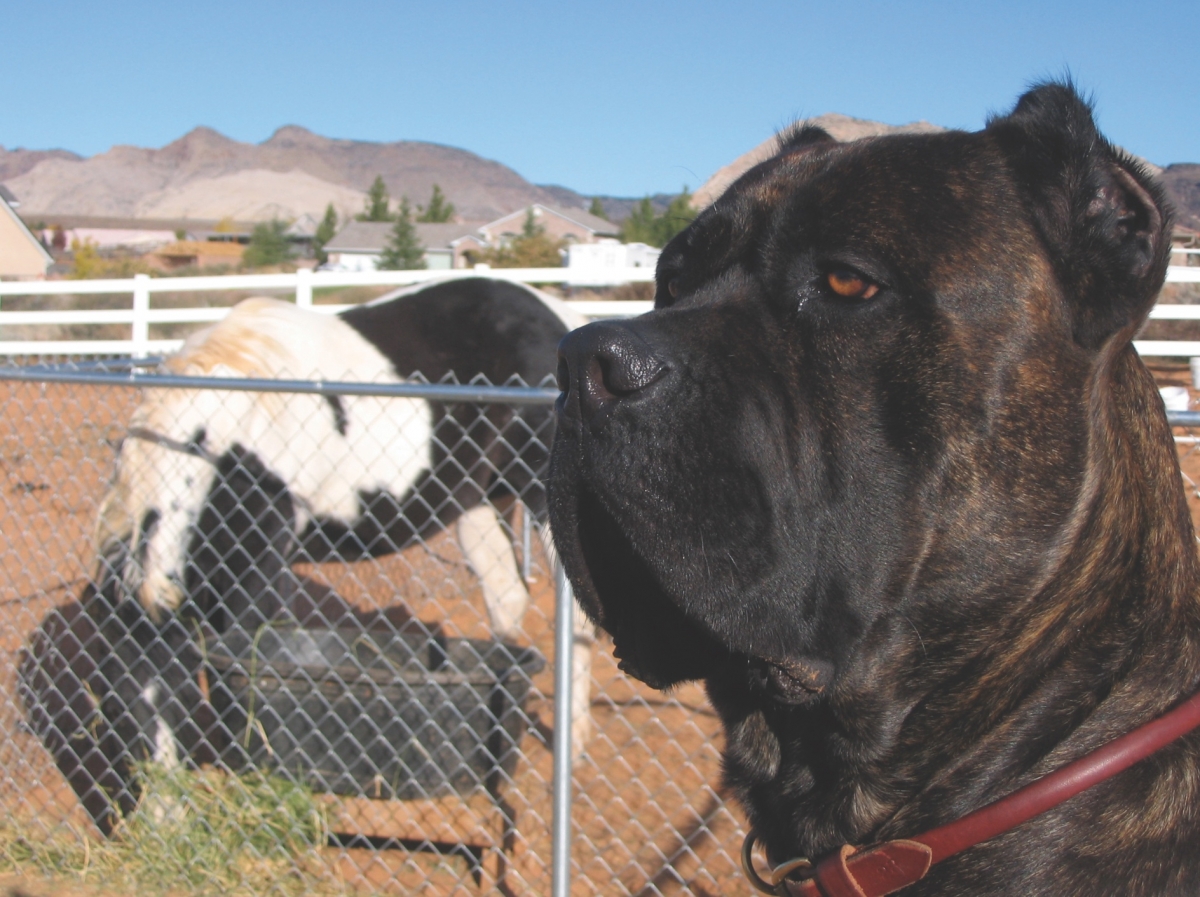 A truly obedient dog will be able to follow your commands even when there are distractions present.

Socializing early and often will help prevent unwanted behaviors in the future. Keeping your dog socialized throughout his life is the key to raising any Molosser. Introduce your dog to any and all types of people, dogs, objects, places and sounds. Often I see dogs who are nervous over everyday interactions, such as trash bags opening, vacuums running or walking across objects of different textures. Dealing with this can be as easy as opening up a tarp on the floor and having your dog walk across it. Playgrounds at the park offer all kinds of agility obstacles for your dog without having to spend the money on pricey equipment. I tell all my clients to make it a weekly goal to have their puppies meet a minimum 15 to 20 new people and five new, well-socialized dogs, and to introduce them to 10 new sounds or objects.

All three of the “case studies” accompanying this article share one thing that helped the dogs deal with their behaviors, and that is obedience. Obedience is the key to deal with any issue you may face with your Molosser. Start obedience early and have fun training your dog.   Raising a Molosser at times can be difficult, but the payoff is very rewarding. I love raising and training Molossers. If you are consistent, patient and reinforce behaviors, good or bad, the right way, you will have a perfectly lined-up Rubik’s Cube – and a phenomenal dog. 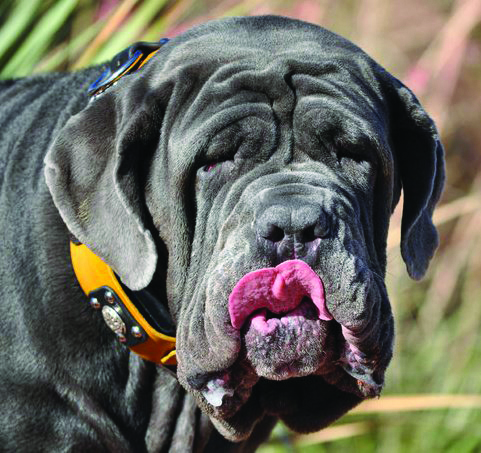 Blue, a 1-year-old, intact Neapolitan Mastiff came to me for aggressive tendencies with other dogs, mainly fence fighting. Blue was 130 pounds of pure strength lunging at any other dog he saw. He had pulled his mom over numerous times trying to get to other dogs. Blue had been re-homed three times in his first year of life, not finding a consistent handler in any of them. After many scraped knees and no more walks for Blue, this owner contacted me to see what I could do with him.

Neapolitan Mastiffs are notorious for territorial aggression. I worked really hard teaching Blue obedience. We worked for two weeks before I introduced him to any new dogs. I did not want to push him too far, too quickly, and wanted a stable amount of obedience for control.

The first time Blue was around another dog, I put him in a heel and had him focus his attention on me and the command he was doing instead of the other dog. Within five minutes I had Blue holding a down right next to another dog, who was also holding a down-stay. Both dogs held the down stay for five minutes while casually sniffing one another. I released both dogs, and they started playing immediately.   I continued working with Blue for an additional four weeks in my in-kennel training program to build a strong foundation of obedience. He went home to his parents, where he is a happy, well-adjusted boy. 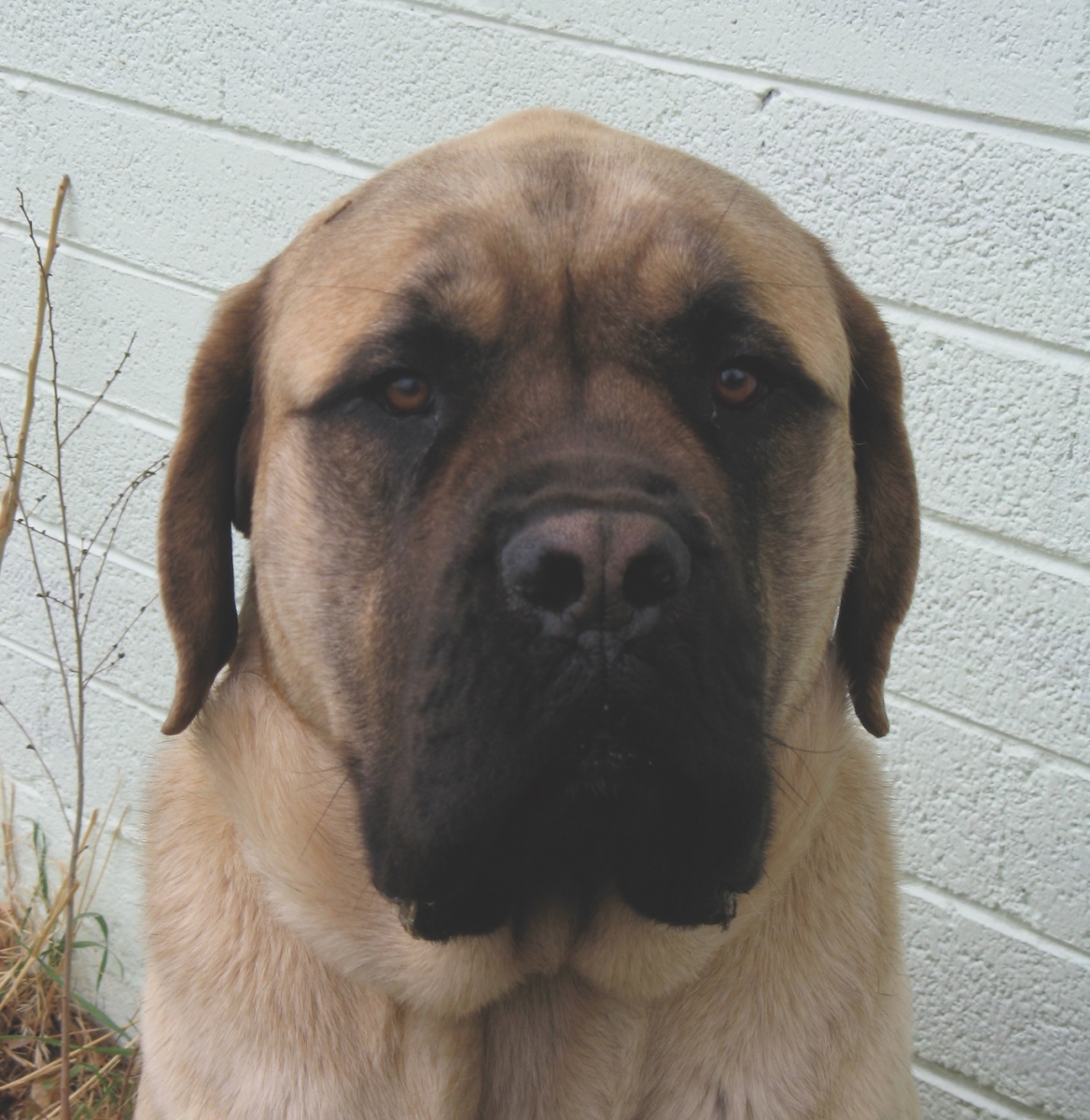 Sophie – a 1-year-old, 140-pound English Mastiff – was one of most fearful dogs I have ever trained. She would urinate, cower and hide behind her mom’s legs if another human even came within her sight. She was perfectly fine with other dogs, but was terrified of people.

I very quickly found out from talking to her mom that Sophie very rarely got out of the apartment and was not socialized beyond two trips a year to the vet. Her mom unknowingly reinforced Sophie’s fear by petting and baby-talking her when she acted nervous about anything. This quickly built her fear more and more each month.

We worked on building Sophie’s confidence with agility obstacles and obedience. Agility is a great way for a dog and handler to build trust. Most of my agility obstacles are everyday obstacles you can find at a local parks and playgrounds. If your dog trusts you as his leader – and believes you won’t put him in a dangerous situation – you can put him on any object. I start puppies as young six weeks walking across unstable, differently textured surfaces.

Through obedience and agility for Sophie – and teaching her mom when to reinforce behaviors and how to be an in-the moment trainer – Sophie has come a long way. She can hold a sit to be petted by a stranger and walk through crowds of people without exhibiting any fear. 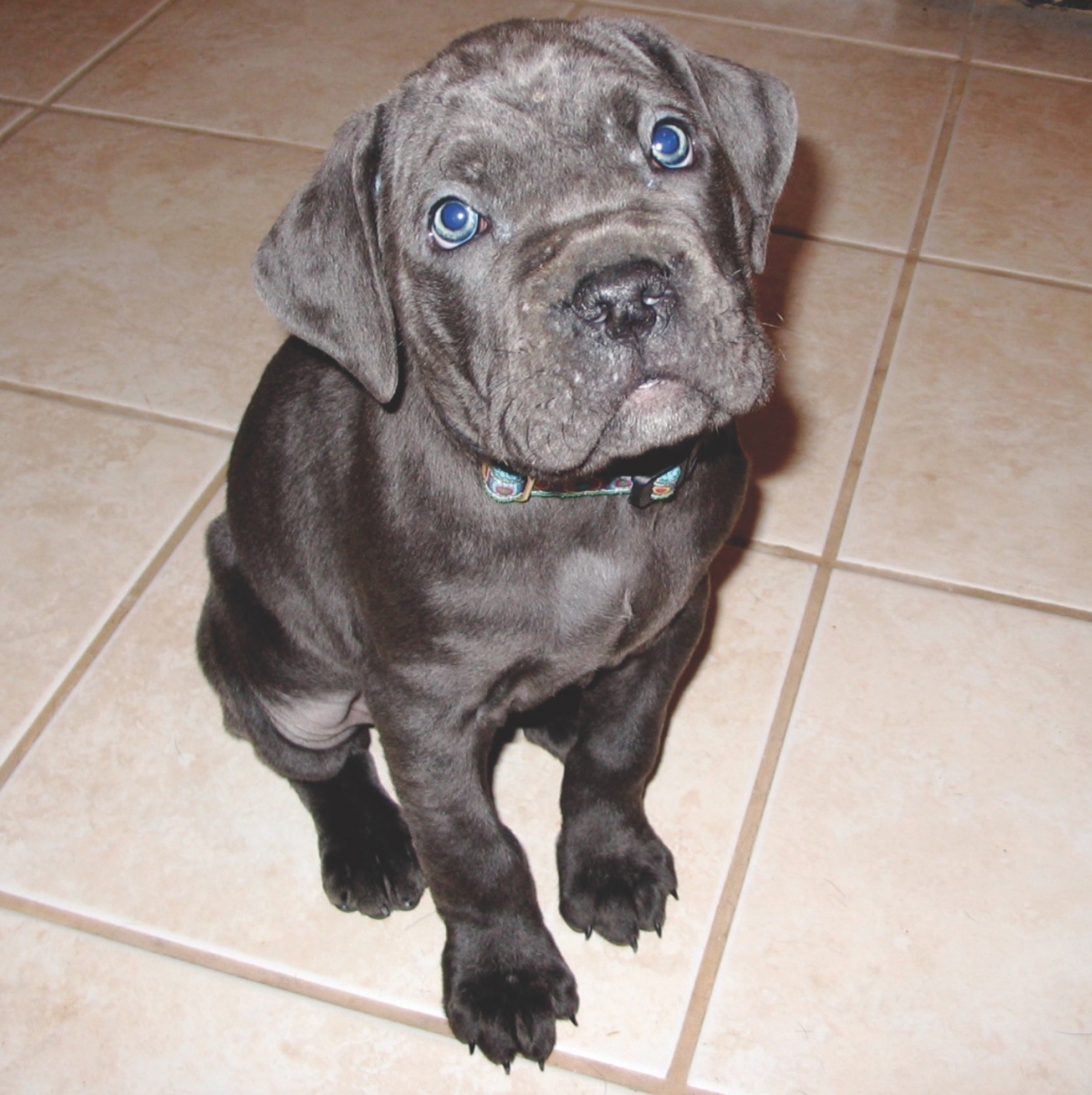 I took Cerberus, my male Cane Corso, to dog-training school with me when I received my certification as a dog trainer. We were both having fun learning new things together daily. He was my best friend – still is – and I thought I knew him better than anyone else knew their dog. I could tell you exactly what he was going to do in all situations – until one day.

We were walking through the house, and suddenly the picture hanging on the wall was the scariest thing Cerberus had ever seen. Now, this picture had been there the entire time we had been living in that house, but on this particular day he thought the picture was going to walk off the wall and attack him. Cerberus was eight months old and going through his first fear stage. 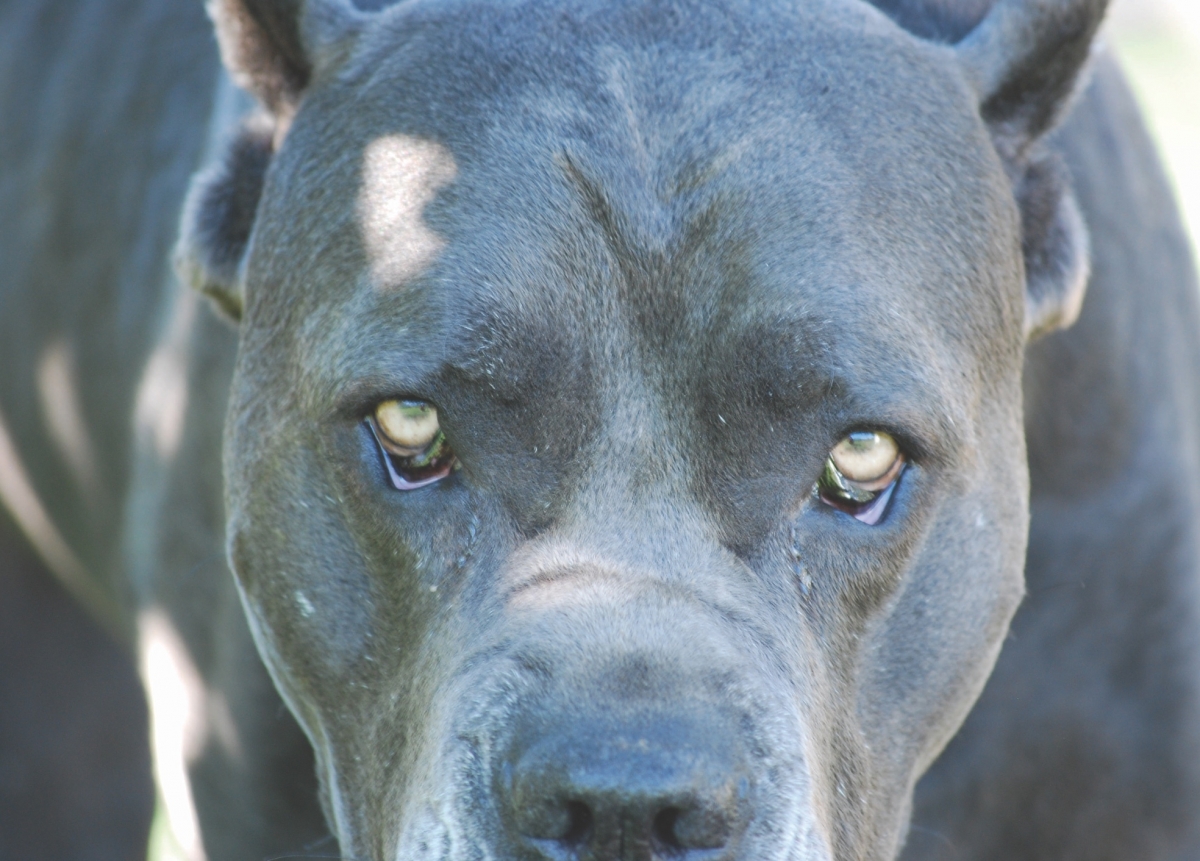 I gave Cerberus the heel command and walked by the picture slowly, getting closer once he showed he was more comfortable. Within 30 minutes I had taken the picture off the wall to show him, and he was taking treats off it. He never looked at that picture in fear again. This was the first of many fear stages for Cerberus; he stopped showing fear stages around 18 months. By using obedience and his confidence in me as his fearless leader, he has been a well-adjusted Cane Corso that can go anywhere and do anything for eight years now. 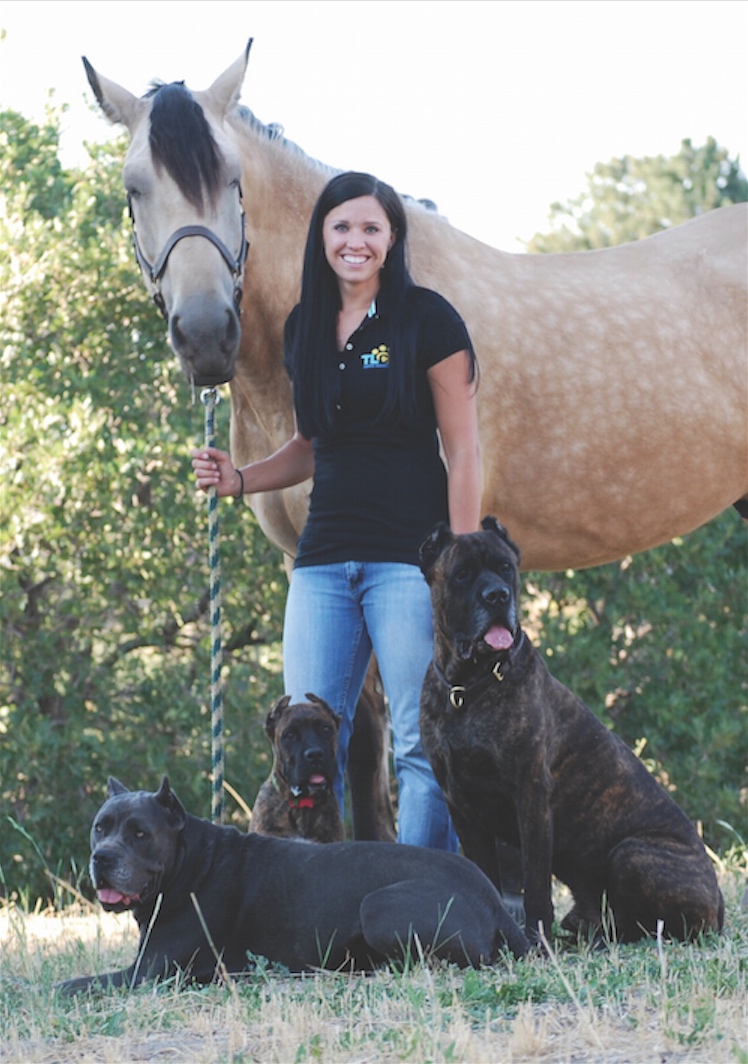 Tonya Folau left her studies in nursing eight years ago to pursue her true passion – dog training. The founder of TLC Canine Coaching in Sandy, Utah, she is certified in dog training by the Triple Crown Dog Academy, and offers private and group classes to all breeds, though her specialty is Molossers.

© Modern Molosser Magazine. This article may not be reposted, reprinted, rewritten, excerpted or otherwise duplicated in any medium without the express written permission of the publisher.
Fri, 01/15/2016 - 5:56pm