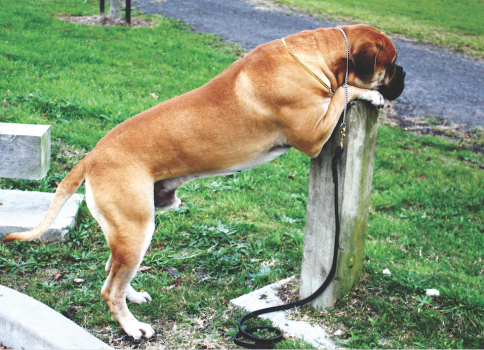 My Bullmastiffs are my everything – my world and my kids, and I make no apologies for that. I would go without before they ever had to.

I like to do new things with my Bullmastiffs. And I really don’t like being told, “You can’t do that with a Bullmastiff.” Game on, I say! Unfortunately for the breed here in New Zealand, not many people do things with their Bullmastiffs. When I say “things,” I mean working them, training them to do tasks. Most people are content with having a family dog that is good company and pretty low maintenance on the exercise front. And what Bullmastiff would complain about that? Once a dog has mastered the “down” command, he can be instructed to do it while partially on an obstacle, leading to some interesting body positions.

I compete in obedience with my old girl, but due to her back legs, that is about the extent of being able to work her. She is happy with that, and so am I, and all in all she is a pretty amazing ambassador for the breed. At obedience competitions I am just known as “Daisy’s Mum.” As far as I am aware she is the only Bullmastiff competing under the New Zealand Kennel Club obedience regime.

When my wee man NuNu (who is not “wee” at all now) came along, he was more athletic in make-up. My hope was to get him into the obedience ring, too, but I soon found out he is a bit too bright to want to walk round in circles and straight lines. I kind of hit a brick wall over what to do with him training wise.  Being a minority breed in the area of obedience or working, it was pretty much impossible find an organization that would accept a Bullmastiff. Training over here is pretty much ruled by Border Collies and German Shepherds, and many trainers are pretty narrow minded. NuNu went from being a “lazy” dog to one who was eager to learn and succeed.

My boy knew the basics, but was not progressing at normal classes, and I knew he was capable of so much more. He was also extremely lazy and knew if he looked at mum with the puss ’n’ boots look, he got away with it. So without me realizing, he had me trained.

When we were out walking one day, he decided to go into protect mode when a dog came rushing up behind me. A 64-kilogram (105-pound) intact Bullmastiff male on a working harness and 8-meter (26-foot) lead going into natural protect mode is something to be seen, and is also extremely scary. I remember thinking, “I hope the lead and harness hold.” The stupid owner of the other dog eventually came and got him, but not until my man had given off three earth-shaking warning barks. I don’t know who got more of a shock that day – me, the dog that rushed us or the other owner.

I thought long and hard after that about what I could do with him training wise, because if he decided to completely go, what chance would I have in stopping him? By chance that day I took him from the park to a pet shop to give him a positive experience after what had happened – a decision that changed our lives. After hearing what had happened to us, the pet-shop owner gave me a training brochure. I thought, “Probably another closed-minded trainer, but why not call and see what happens?” To my surprise, the chap on the end of the phone actually knew what a Bullmastiff was and seemed keen to assess us and see if we would be the right fit for his training.

He came round for the assessment, and left three hours later. We were accepted into his foundation class, and I just couldn’t wait to start the following weekend. This chap also seemed to know a lot about big-breed dogs, and those not considered so “socially acceptable.”

Our first training session was interesting. The class included three pitbulls, two American Bulldog hybrids, a couple of black Shepherds, an extremely grumpy American Staffy and a Staffy cross. Not a Border Collie or Labrador Retriever in sight! All work done that day was in extreme close proximity to all dogs there. It was truly just an amazing day, and my wee man’s life changed for good.

The lazy dog was gone, the willing to learn and succeed dog had arrived. I guess you could say that he started to became a man that day! We did five weeks of foundation training, all based on working your dog through the standard commands extremely slowly, making sure he understood and then completed them. It also focused on the handler communicating with the dog, and most of all, it strengthened the bond between handler and dog. And none of this training involved food.

NuNu is two and a half years old. We’ve been training through the normal obedience clubs since he was 12 weeks old, on and off, but it wasn’t until we started the new training that he actually completed a stay outside a busy supermarket! Because the training is not food-orientated, positive reinforcement comes from praise – and some fun with a tug toy when the job is done.

We have now progressed to the next level of training: obstacles. You will see from the picture of NuNu in class that “one of these things ain’t like the others” ... and that would be the Bullmastiff! He is twice the size of most of his classmates, but he is required to do everything that the smaller dogs do.

I think I am extremely lucky that I found a trainer who knows the breed and believes that my wee man and I will excel in this training. In his mind the Bullmastiff is a working dog, and it should be worked, and not just become a couch potato or kennel dog that gets run around the show ring every other weekend. They are better than that. They can be trained quite easily if you are prepared to put in the time and effort, and are fortunate enough to be under the guidance of someone who knows what they are talking about. What my wee man and I have accomplished so far still blows my mind, and there is still so much more to come. After a dog has mastered the basics, he will anticipate and relish more complex challenges.

This training has also opened my mind. Although he is the biggest by far in the class, NuNu has the best rear-end coordination. Each obstacle that is put in front of us he just can’t wait to take on. When he has completed it, the only way to describe the look on his face is, “Did you see that ... did you see that, Mum?” The pride I have in him I just cannot describe.  He is happier, moves like a complete dream, and gone is the very lazy Bullmastiff that would rather watch you exercise.

I am now able to control him when he does feel the need to go into natural protection mode. We all talk about “Oh, my dog would protect me.” We also hear and read about how the Bullmastiff naturally has protection built in, but you will only see it if you are actually put in that situation. So here is a question for you: If your Bullmastiff went into natural protection mode ... could you call him/her off? Something to seriously ponder into today’s world.

Don’t get me wrong – my wee man has a temperament to die for. His whole litter is amazing temperament wise, and he is also a certified therapy pet. But because a Bullmastiff has a fantastic temperament does not mean that he won’t protect ... and when he does, what do you do?

For example, at training class, NuNu had to potty. As I bent over to pick up after him, yet again a dog came rushing up behind me, and my wee man went to protect me. Something so simple, but it was his natural instinct to do that. One command from me, and NuNu was at ease again. He had let me and the dog know that he considered it a threat, and needed to alert me that something was coming. Once I let him know all was OK, he instantly relaxed. That complete trust in each other was something he and I previously did not have.

Besides all that, an active Bullmastiff is a happy Bullmastiff, and, more important, a fit one. The breed is dying pretty young these days – could mental and physical inactivity be contributing to this? The author and NuNu find interesting obstacles to work on in their daily walks.

I would like to think my NuNu is one out of the bag, but the truth is he is not. There are lots of Bullmastiffs out there capable of being worked to their full potential. Working them comes down to the humans that own them.

Our walks are now more exciting, as I am always on the lookout for something for him to climb, walk along or balance on. He too spots things in the distance, and his face lights up, as he can’t wait to get to it. Something so simple has made the bond between us unbreakable. He is certainly well along the road now of becoming my personal protection dog, which in a roundabout way was what they were back in the day.

The next stage of our training and the ultimate challenge for us is tracking, again something Bullmastiffs were designed to do. We will be taking this challenge on with an open mind, but I quietly have no doubt it is something we can master as a team.

Take a leap of faith with your dog, and don’t let anyone ever tell you “Oh, you can’t do that with a Bullmastiff!” Sharron Mischefski of Bullmischief Bullmastiffs got her first Bullmastiff (Kugel Daisy May, CGCB, RN – Certified Therapy Pet) in 2006, and life was never to be the same again. In 2009, her second Bullmastiff and first show dog arrived: NZ Ch. Bodacious Horatio Nelson, CGCB, RN – Certified Therapy Pet. And now in 2012 number three, Kugel Colonel Blackwell, is due. She fell into obedience training after she was told “Oh, a Bullmastiff can’t do that.” She has the only Bullmastiffs in New Zealand with the combination of Canine Good Citizen, Rally-O, certified therapy pet and champion titles. Bullmastiffs and training them have become her passion.

© Modern Molosser Magazine. This article may not be reposted, reprinted, rewritten, excerpted or otherwise duplicated in any medium without the express written permission of the publisher.
Wed, 09/09/2015 - 2:36am