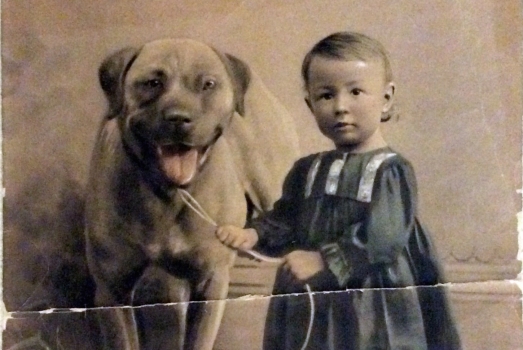 A home-grown ‘"Museum" celebrates all things Mastiff
By
Denise Flaim

Manhattan has the Met. Paris has the Louvre.

And New Jersey has the Mastiff Museum.

Steve Oifer of Morganville, New Jersey, started collecting all things Mastiff in the mid-1970s. It was a slow slog, he remembers: “At dog shows I’d go through all the boxes that they had available from ‘A’ to ‘Z,’ and when I came to the ‘Ms,’ it was the thinnest of the thin.”

Once the Internet arrived, Oifer and other memorabilia-minded fanciers discovered that their “finds” were oftentimes none too rare: “There are tremendous amounts of multiples out there,” he says, noting that collectors disemboweling books and selling the individual page plates are altogether too common.

A fine-art collector in his own right, Oifer has amassed a sprawling assortment of Mastiff prints, paintings, photographs and sculptures over the last three decades. They are housed and displayed in a spare bedroom of his suburban home, and, like any great collection, this one is far from complete: Oifer is always scouring the web and auction listings that next great objet to add to his cynological cache.

You Gotta Have Art

Some pieces from the Mastiff Museum. This 1890 bronze on a marble base by Spanish/French sculptor Charles Mercier Gantrago is one of two at the Mastiff Museum. This version has a natural bronze patina; its companion has a gold gilt surface. This grouping from Hutchinson’s Dog Encyclopedia illustrates the variability in head types back when the breed was a confabulation of many crossbreds. Modern Mastiff telephone, made in China. Popular after the Civil War, cabinet cards are thin photographs mounted on a card. This one of a Mastiff and child dates to about 1885. Throughout the 1880s and 1890s, the Woolson Spice Company of Toledo, Ohio, created eye-catching images for giveaways. This print, entitled “A Faithful Guardian,” was in all likelihood such a token of appreciation to its customers. Whimsical print of a Mastiff and cow pulling a cart by artist Sid L. Brackelle. It dates back to the turn of the previous century. Postcard from the South African Boer War, circa 1902. In it, a Boer woman stands before a Mastiff, which represents the British ruling power.
© Modern Molosser Magazine. This article and video content may not be reposted, reprinted, rewritten, excerpted or otherwise duplicated in any medium without the express written permission of the publisher.
Thu, 09/03/2015 - 9:07pm