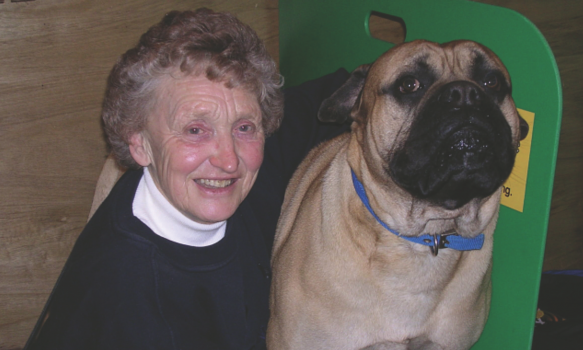 Anne Colliass, daughter of the late Harry and Beryl Colliass, has been an integral part of the Oldwell Kennels in the U.K. for much of her life. In this exclusive interview, she talks about her family legacy, setting priorities in breeding programs, and advice she'd give to those starting out in Bullmastiffs today. 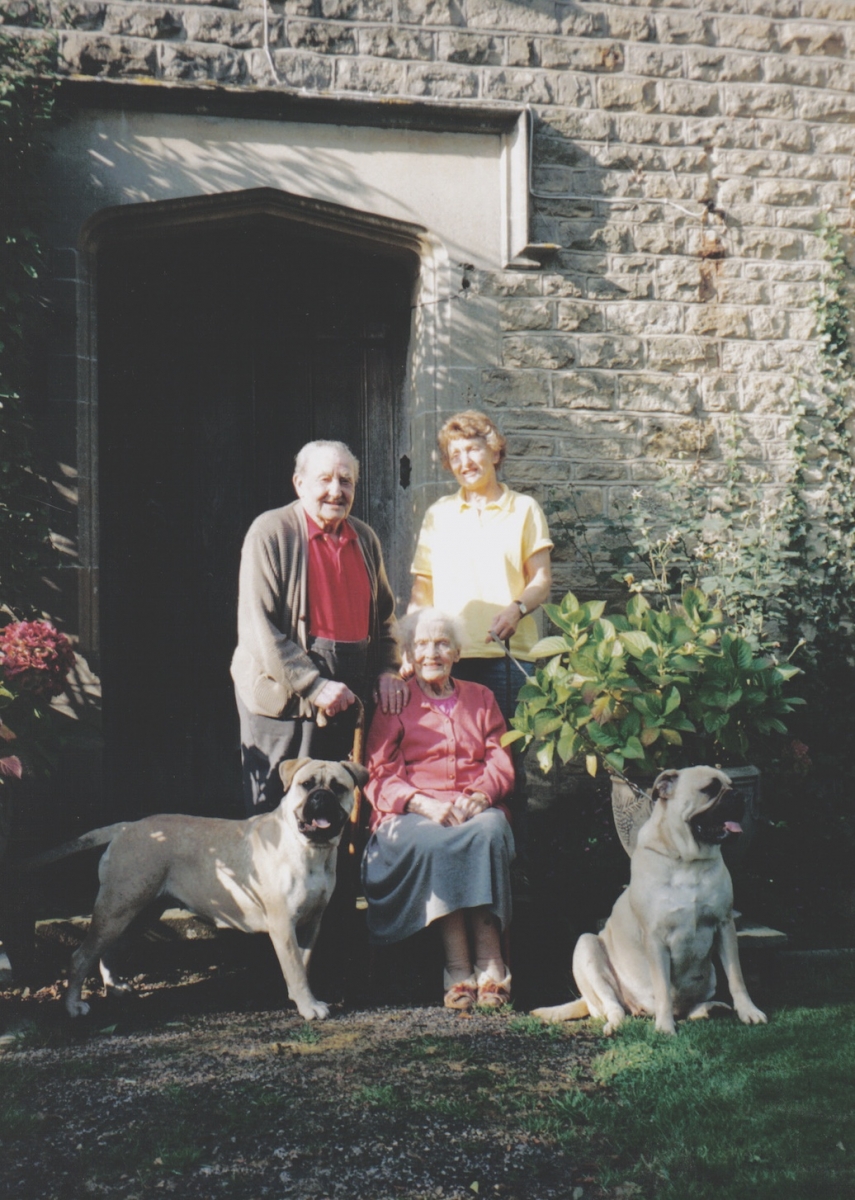 Anne Colliass inherited her love of Bullmastiffs from her parents Harry and Beryl.

My parents Harry and Beryl Colliass decided to purchase a truly “British dog,” as they described it, when their old Labrador died in 1937. I was two years old when they finally decided on a Bullmastiff, Roger, who was sired by the first U.K. champion, Roger of the Fens. My sister and I grew up with Roger, and he laid the foundations for the family love of the breed. 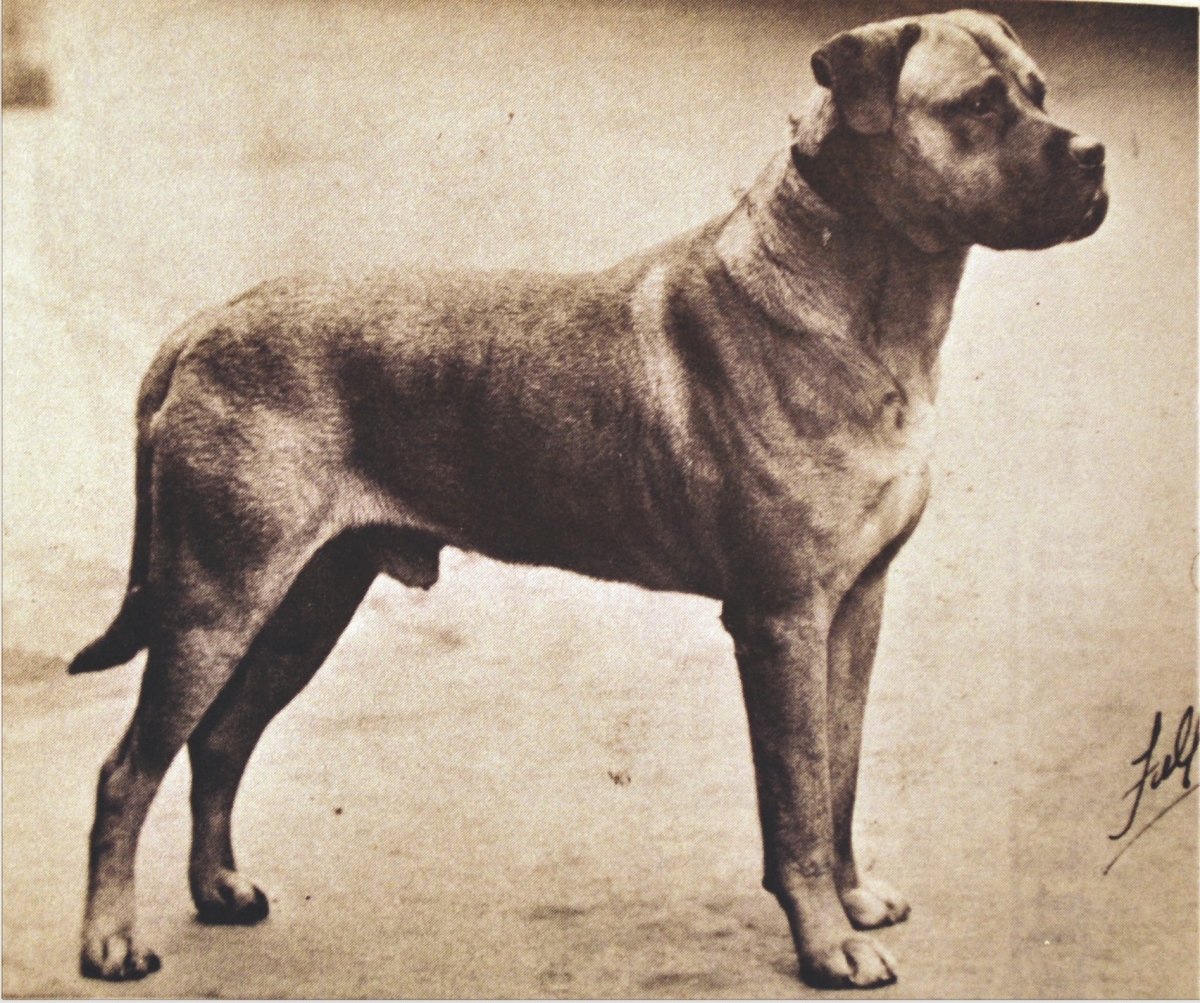 During World War II, we lost Roger. At that time it was very difficult to find another Bullmastiff. The numbers in the country were down to very low levels, with very few breeders able to maintain kennels. Eventually, however, Mum and Dad tracked down a fawn bitch puppy to be our pet. Subsequently, it was felt puppies would be good for the bitch’s well-being, which was a common idea of the time, and she was mated to the brindle dog Peregrine of Harbex.

Mum and Dad had no real ideas concerning future breeding and showing, but Florence and Ted Warren (Harbex) were keen to encourage them. Two puppies were kept, and Dad, with the Warrens’ encouragement, decided to show them both and ended up winning a special breeders class and a silver cup with one of them. From this win, the passion for showing and breeding grew, and from then on, Mum and Dad began the quest to breed and own the best Bullmastiffs, with the main aim of improving overall type. They enjoyed the show scene immensely, and the satisfaction of making lasting, warm friendships and producing top-class dogs. Without doubt the whole thing completely took over their lives.

We lived beside the River Thames for many years, and in fact the house we lived in was called Oldwell House. In 1959, when the first champion Bambino was produced, The Kennel Club invited Mum and Dad to apply for an affix, which of course had to be Oldwell. At the time we had about 10 dogs, and we quickly realized this was not an area to breed numbers of dogs, so we moved to rural Northamptonshire, where the kennel was able to expand. The greatest number of dogs we ever kept was over 60, with the kennel accommodation increasing with the numbers. The staff consisted of Mum and Dad, a full-time live-in kennel man and two part-timers from the village, all caring for the dogs.

My earliest memories were as a child playing with Roger in the garden. He had a wonderful temperament and put up with everything we did, even when we tried to ride him like a horse! Harry Colliass (on right) showing Ch. Dandini Prince of Oldwell. At left is Margaret Reynolds of the Yorkist kennel.

Breeding and showing Bullmastiffs was my parents’ passion and life’s work, and so I suppose I always knew that I would carry on breeding and showing. It would have been wasteful to give it all up and not carry on. My parents had an intuitive feeling for breeding their dogs, and I know I have inherited it. Somehow we knew the right thing to do, even though we have had help to arrive at our own decisions. Betty Millard (Marbette), in particular, was a great source of advice and information, and today I have Billy Brittle, a marvelous person with whom to discuss doggy plans and breeding concerns. I have always been surrounded by the best dogs, so I have not needed other breeders to teach me the way forward, although I do like to discuss concerns with other breeders. Without a doubt, my involvement with breeding horses has helped me to have a broad outlook and to study the importance of good construction and movement with all animals. 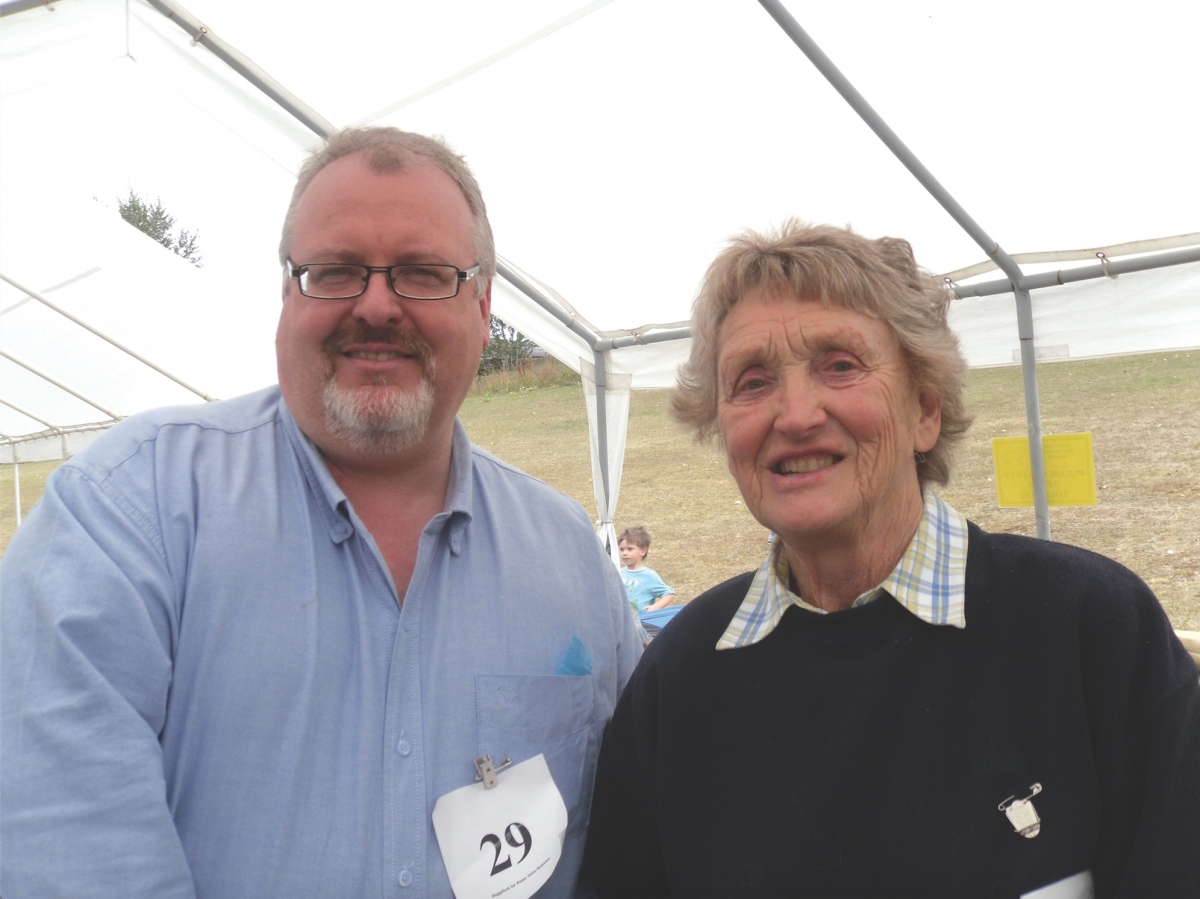 We have always particularly liked fawn Bullmastiffs with the contrasting black mask and have always tried to breed good, sound dogs with endearing temperaments. The Oldwell type of Bullmastiff has evolved over the years, but the dog who really set the type was Ch. Oldwell Toby of Studburgh, who was all Marbette breeding. He was an excellent dog himself and was one of the few sires of the time consistently able to reproduce the correct type with a variety of different bitches. He can be traced back by many championship winners today. Ch. Oldwell Toby of Studburgh was an influential sire who set type in the Oldwell breeding program. He is pictured at Crufts in 1966. 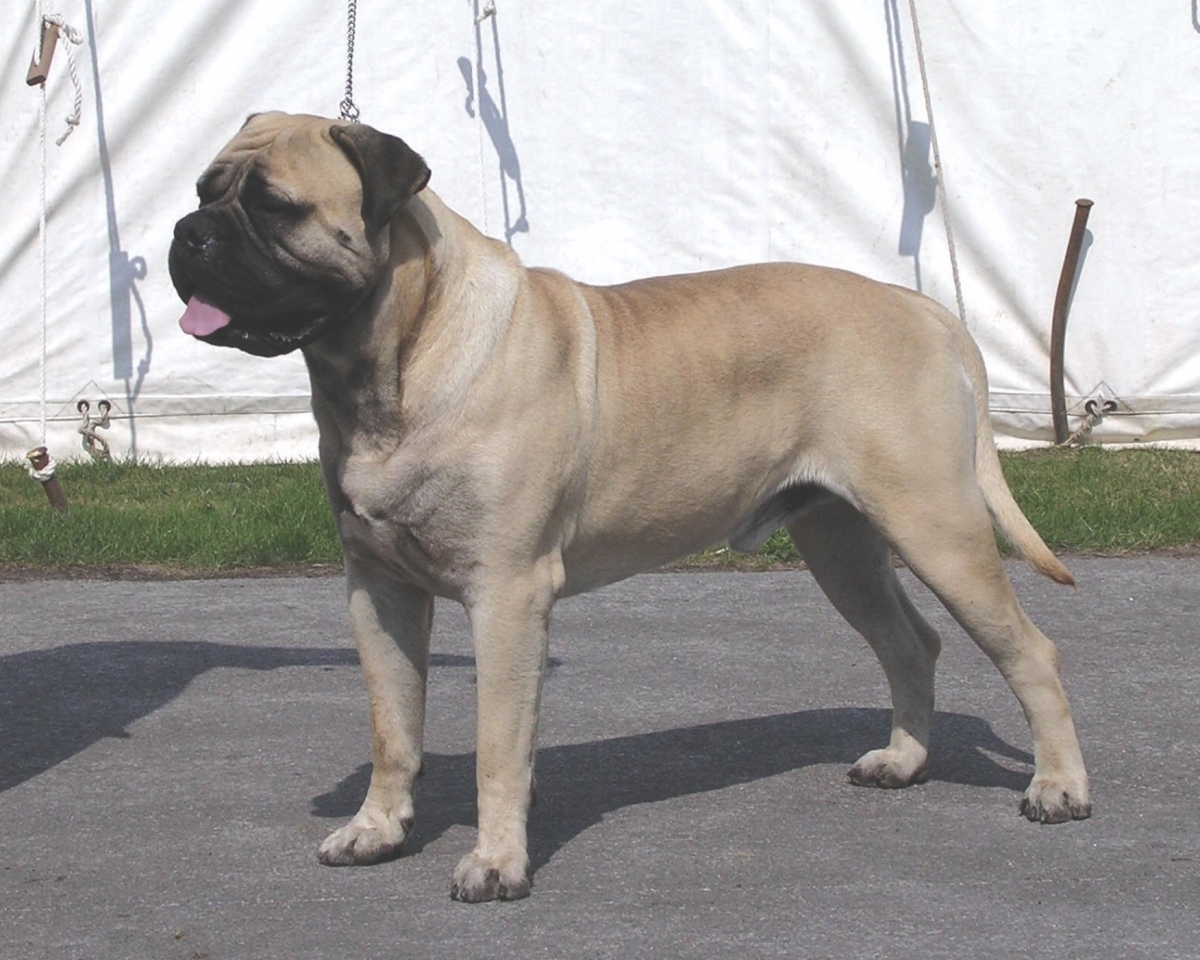 Ch. Hannah of Oldwell, a bitch typical of the kennel, with her fawn color and dark mask.

The dogs come along and they are all loved, but for practical reasons only one or two live in the house. I suppose the most favorite of all was Honey Bee, who was lovely to look at, but she had the most amazing, delightful character – she just loved life.   I have been to dog shows, on and off, since I was 12 years old, so I can remember many good dogs. In the earlier days, Bullmastiffs ranged from the near Bulldog type to the large Mastiff type. We do not see such a range of type at shows today and there are many nice dogs. I do feel, however, that many people are seeking size and heavy bone, which makes the dog look cumbersome. Real class and quality are being sacrificed, and the dogs are unable to move freely. Unsoundness is creeping in, which is most undesirable. On the whole, temperament has greatly improved and less aggression is apparent. The Bullmastiff should be a great companion and ready to protect its owner, when necessary.

The greatest priority in the breeding program is to try to maintain good healthy stock with reliable temperaments. There is a breed standard, so we must breed to keep as near as possible to that standard, producing well-balanced, correct stock. Dogs with known heritable faults and diseases should never be bred from. I would have nothing to do with any of those things for breeding purposes. I always say that breeding Bullmastiffs requires total dedication. They can be difficult to mate, difficult to whelp and difficult to wean, when compared with other breeds. Puppies need constant supervision and assistance, all very hard work, and I sometimes wonder why we do it! Billy Brittle has been associated with the Oldwells since 1983. He purchased a puppy from my father and made him up to Ch. Oldwell Corrallian. Billy was always a great friend of my father, and he learned much at father’s knee! They would go to shows together when Father could no longer drive, and when Father could no longer go in the ring, Billy showed the dogs. I have been most fortunate that Billy has continued to show the dogs for me; he has acquired a great knowledge and understanding of Bullmastiffs, and his assistance and advice is invaluable for the kennels.

I have rebuilt part of the kennel complex, providing comfortable accommodation for the dogs whatever the weather. Gone are the days when a large number of dogs was kept (more than 50 in the early 80s). Nowadays there is only an elderly me and a part-time helper to manage the kennels. At present, I have 10 adults and four young puppies to care for.

In this country, all the large breeders of Bullmastiffs have disappeared, but there are now several kennels with smaller numbers, which reflects the economy of the times.  I don’t think large quantities automatically produce good quality. In my own case, I think it would be fair to say that I have maintained high quality from reduced numbers. It is true to say that the strength of a kennel relies on having the best bitches; in this respect, I have been lucky. However, bearing this in mind, one still needs to look at pedigrees carefully because like will breed like. 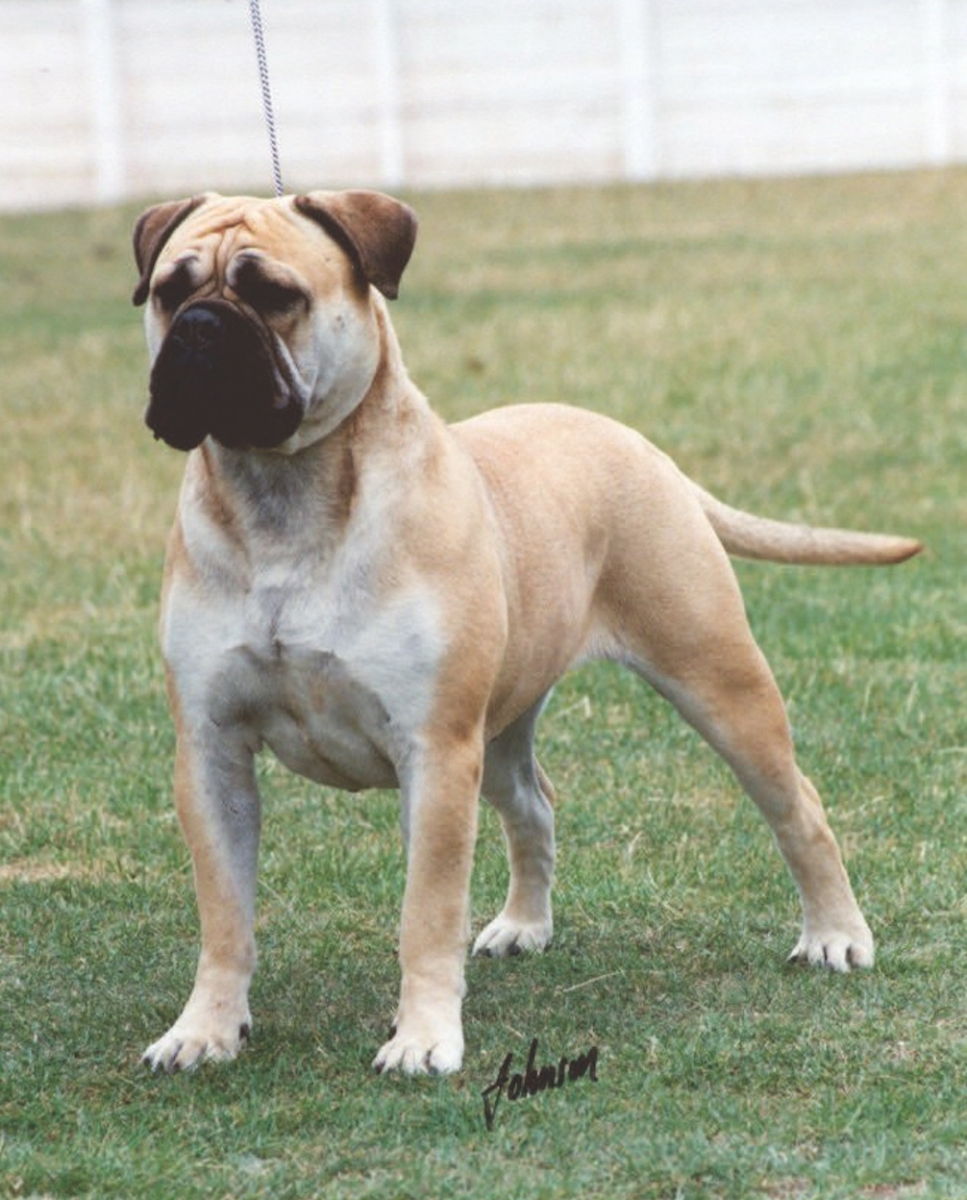 I always select mating pairs carefully, but, with reduced numbers, I have to look outside the kennel for new blood. This was not an easy task because there are very few people with recognizable lines. I was therefore very lucky to be able to incorporate into my breeding program Am. Ch. Bastions Music in the Glen, a dog who was able to complement the Oldwell genes satisfactorily without introducing problems into the kennel. The results of these matings give us hope for the future. 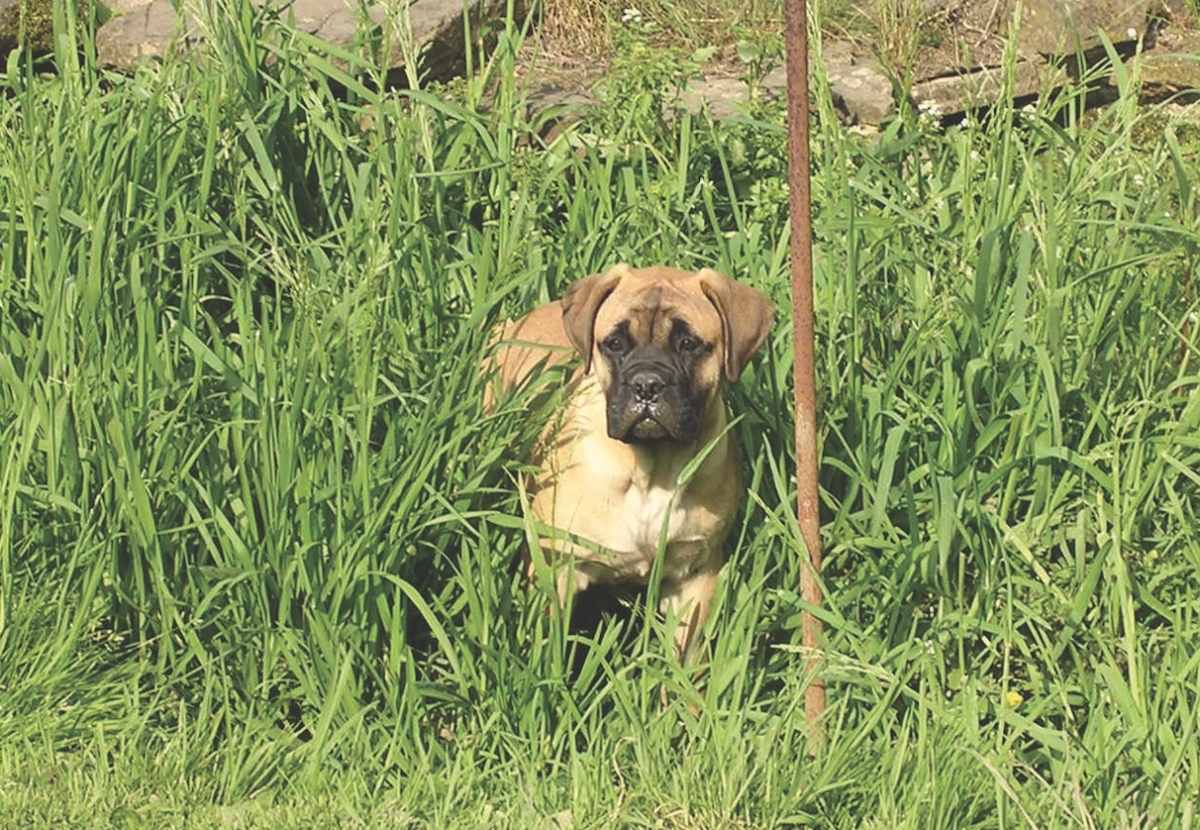 A recent Oldwell pup.
A breeder wishing to start out in Bullmastiffs must realize their commitment has to be total. If you have puppies, there is no going to bed for the first fortnight! However, if one is prepared to work so hard, the reward for creating lovely, companiable dogs is unsurpassable, and satisfaction is guaranteed. Bullmastiffs are not easy to breed, and beginners should always seek advice and help from experienced breeders. People are always willing to help, and we should all have the aim to breed good, healthy puppies.
Bullmastiffs are very sensitive and responsive to moods, and can help us to be happy. There are many stories showing ways they have given us joy. I think my favorite is about the bitch puppy I sold to a lady in Finland who trained the puppy to do search and rescue. This bitch became very good at it and helped save several people lost in the snow. She was also an international champion and a good brood bitch. What more can you ask for in a dog?
© Modern Molosser Magazine. This article may not be reposted, reprinted, rewritten, excerpted or otherwise duplicated in any medium without the express written permission of the publisher.
Sat, 08/06/2016 - 5:29pm