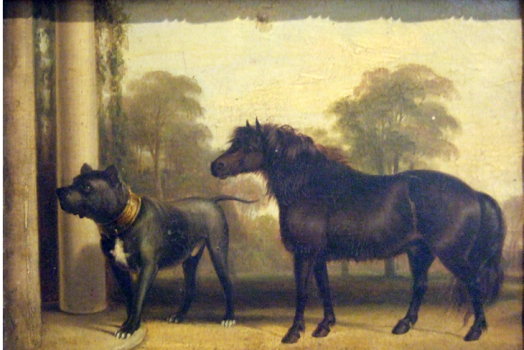 In the 1830s, Cartache charmed a Portuguese king and sailed with the British navy. He and the pony Jem Crowe were immortalized in this oil painting by George Cole, an English painter known for his landscapes and animal portraits.

For history and Molosser buffs alike, here is the amazing story of Cartache, who lived almost 200 years ago.
By
Denise Flaim

According to a 19th Century account, Cartache was a “splendid animal of the real Spanish Mastiff breed” who belonged to a Portuguese printer. At this tumultuous time in Portugal’s history – the late 1820s and early 1830s – the throne belonged to Don Miguel, known as the “Usurper of Portugal” after he returned from exile and installed himself as absolute ruler. The printer had published something that displeased the king, who ordered his arrest. But the soldiers returned empty handed, explaining that they had encountered “determined resistance made by an enormous mastiff, who defended the avenue of the printer’s house against the entrance of the party of soldiers sent to secure him.” King Dom Miguel I around age 26, circa 1828, and Amélie of Leuchtenberg Duchess of Braganza ... not a Molosser fan.

Impressed by this show of canine fealty, Don Miguel sent word to the printer that he would be pardoned for his offense in exchange for the dog. The deal was done, and Cartache the mastiff and Miguel became inseparable companions.

But Cartache’s time at the royal court was short lived. In 1833, in the face of his older brother Pedro’s advancing forces, Don Miguel fled the city of Cartaxo, this time to permanent exile. Cartache was found by General Saldanha, a Portuguese nobleman and stateman, at the city’s entrance. The dog was near death, bleeding profusely from what was believed to be a bayonet wound.

Nursed back to health by Saldanha, Caratache was presented to the new emperor Don Pedro. But the queen, the Duchess of Braganza, was reportedly so put off by Cartache’s “formidable” appearance that he was given back to Saldanha. From there, Cartache passed into the hands of British naval officer Sir Charles Napier, who under the nom de guerre of “Carlos da Ponza” had taken control of Pedro’s fleet to help defeat his brother Miguel.

Napier returned to England in 1834, and Cartache with him. The war-toughened old mastiff found a playmate in Jem Crowe, a pony who was not much larger than he. “They used to be very fond of a game of gambols,” the 19th Century account of Cartache’s life story explained, “but I think the pony had generally the best of this horse-play, giving poor Cartache more kicks than halfpence.

Cartache died in 1838, reportedly after being poisoned. With his cropped ears, short coat and athletic build, Cartache doesn’t much resemble the Spanish Mastiff, or Mastin Espanol, that we know today. For some, though, he might evoke another breed: the Dogo, or Presa, Canario.

The Canary Islands off the coast of Morocco weren’t named for songbirds: Even in the ancient world, the archipelago was famed for its large, ferocious dogs, prompting the Romans to dub one of its islands Canariae Insulae, or “Island of the Dogs.” Though the island chain belongs to Spain, Portugal has had a long history with it, controlling some of the islands in the 1400s and providing a steady stream of settlers in the intervening centuries.

Many thanks to Steve Oifer of the Mastiff Museum for introducing us to Cartouche. Steve acquired this spectacular painting from an auction house that did not know the incredible story behind the two animals. The painting rang a bell with Mastiff fancier Virginia Wind, who unearthed the historical account of Cartache that brought his story to life.

© Modern Molosser Magazine. This article may not be reposted, reprinted, rewritten, excerpted or otherwise duplicated in any medium without the express written permission of the publisher.
Fri, 08/07/2015 - 6:27am