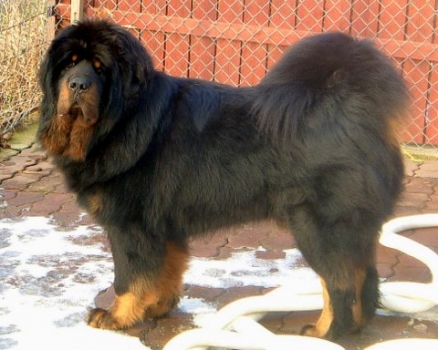 From Tibet With Love

The Tibetan Mastiff's journey from the roof of the world
By
Denise Flaim
Richard Eichhorn saw his first Tibetan Mastiff on a magazine page in 1978.
“Life magazine had an issue on the eight rarest breeds of dogs in the world, and the Tibetan Mastiff was one of them,” remembers Eichhorn, who lives in Palmdale, Calif. “I was about ready to get a Golden Retriever – and then I saw a golden Tibetan Mastiff.”
He wasted no time, getting his first dog that same year.
Last year, Eichhorn celebrated Drakyi Tibetan Mastiffs’ 30th anniversary, with some 15-plus generations now descended from that original dog. His line, which he originally established with Ray and Linda Larsen of Dragonquest and now continues on his own, has provided foundation stock for breeders in this country and overseas. He is a sought-after breeder-judge all over the globe, including China and Taiwan. 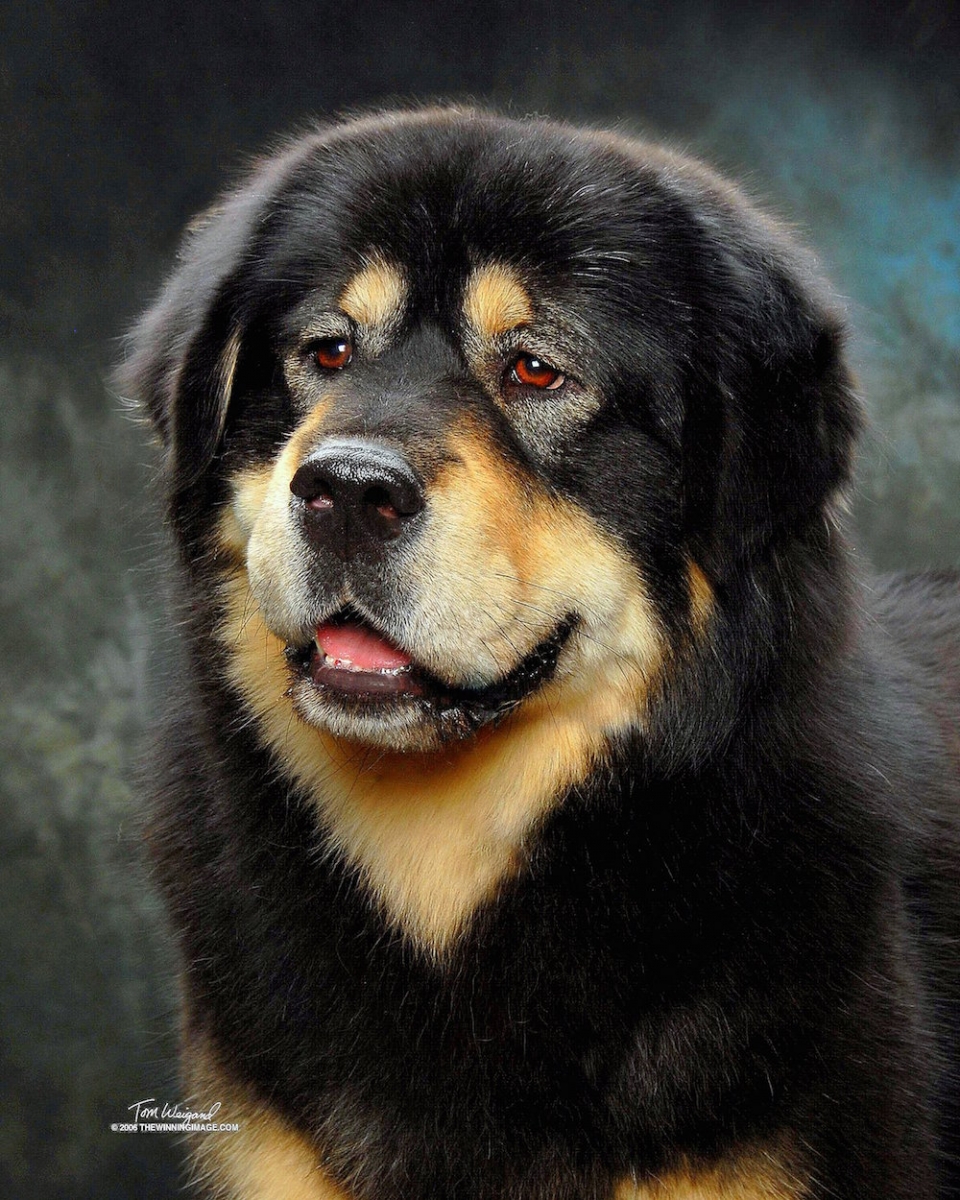 BISS Ch. Lafahhs Lokapala Drakyi, the number-one Tibetan Mastiff for 2007 and the 2008 National Specialty Best of Breed winner. Classic head type and expression for a Tibetan Mastiff bitch.
It is somewhat ironic that as the presumptive granddaddy of many of the mastiff breeds, the Tibetan Mastiff would come so late to the AKC party, only entering the Miscellaneous Group in January 2005, and achieving full recognition exactly two years later. Because of its relatively new status, confusion about what constitutes correct type is widespread. “I’ve had a couple of judges say, ‘OK, what do I absolutely want to put up and what don’t I want to put up?’” Eichhorn says.
He is not short on answers.
“Do not put up mediocre, generic type just because it happens to be a solid working dog,” he stresses. “This is a mastiff breed. It’s supposed to have mastiff extremes – great bone, substance, heavy lips, wrinkling. Those are supposed to be its hallmarks. Do not award generic working-dog movement over an exceptional specimen who has a structural fault.”
In China, he says, breeders make a distinction between the “tiger type” and the “lion type.”
“The tiger would be our mastiff type – larger and drafty – while the lion would be our mountain type – more of a Bernese-type dog, shorter, with less jowl and more hair,” he explains. 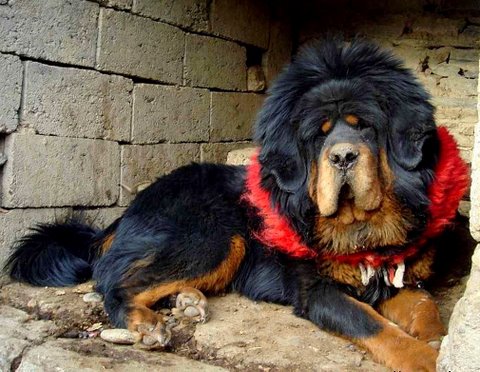 Tsang Khyi is the term used to mean the crème de le crème of the line:  classic, desired “Tsang Khyi” ideal Tibetan Mastiff type.
Eichhorn is a proponent of the tiger type – what the Tibetans prize and call the “Tsang Khyi.” Traditionally, he says, these dogs were picks of the litter, often sold to the wealthy or gifted to religious orders or dignitaries. As a result, they were often given a better diet and exposed to less harsh conditions, developing into heavier, bigger, more mastiffy specimens.
“This is a mastiff that functions in the mountains. And in very extreme climates, sometimes larger specimens could survive better,” he continues, pointing to the enormous Tibetan yak as evidence that bigger can be better, at least as far as surviving the harshness of the Himalayas is concerned. “When the going gets rough in that environment, it’s the robust specimen with coat and size that survives.”
While judges might be inclined to reward sure-footed, showy movers, Eichhorn reminds that this very natural working dog is not one for whom an endurance gait was expected. “This breed functions more as a stationary guardian,” he says.
Instead, judges should think Paul Bunyan: big, muscular, yet very efficient.
“This is a dog that stood his ground and observed from a high vantage point, in a harsh climate where it needs to be very economic in its movement,” Eichhorn says. “The Tibetan Mastiff is not as extreme as a Neapolitan Mastiff, where you’re really awarding type, but it’s not a Malamute, either, and not necessarily as clean moving.” 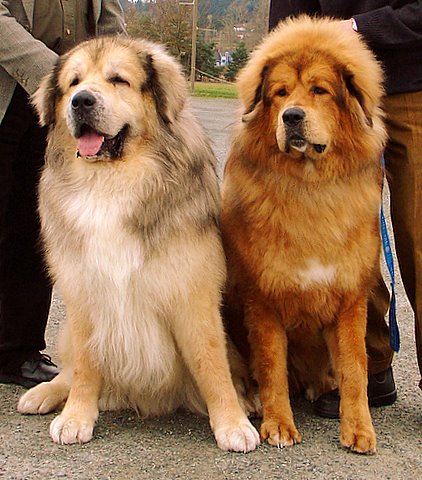 Ch. Timberline Barni Drakyi (first Tibetan Mastiff Westminster Best of Breed winner in 2008) with great-grandson Ch. Seng Khri Bartok of Dawa (AKC all-breed Best in Show winner). Both dogs represent the range of the various shades of gold mentioned in the standard.
Hallmarks of the Tibetan are its distinctly Asian expression; a profuse, hard, weather-resistant double coat; the pronounced longer mane on the mature male, which, Eichhorn points out, “evolved for the same reason the lion’s did, to give that same impressive, thwarting presence”; and large but not super size (a 30-inch male might weigh 150 to 160 pounds, though his voluminous coat might have you venture to guess 200 pounds).
Color is another bugaboo that sometimes confounds judges. “You see just about every color,” Eichhorn says. “And there are a lot of questions about ‘how gold is gold?’”
Eichhorn points to the range of color found on a Chow-Chow to illustrate the spectrum of gold permissible on a Tibetan Mastiff, from rich reddish to pale, creamy gold or buff. If that same shade of gold corresponds to a shade of tan on a black and tan, it’s acceptable, he adds. “So you can have a black-and-tan like a Rottweiler, or pale like a Malamute.”

The range of markings on these three black-and-tan Tibetan Mastiffs corresponds to the various shades of gold seen on the solid gold examples of the breed.
Regardless of the “various shades of gold” referenced in the breed standard, such dogs should have black noses, the exception being the dilute pigment on blue or chocolate-colored Tibetan Mastiffs.
In the end, Eichhorn advises, judges on the brink of a decision should simply remember the breed’s name and all that is evokes. It is, after all, the Tibetan Mastiff. 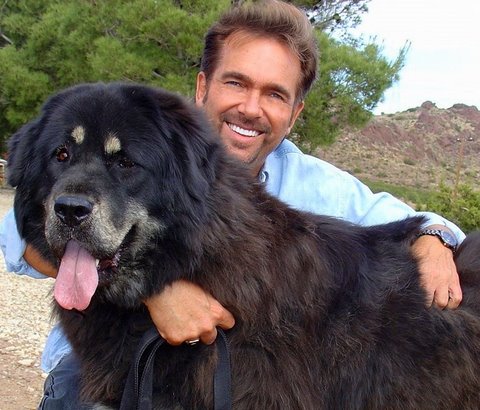 Breeder‚ author and AKC judge Richard W. Eichhorn with 7-year-old Drakyi Shanghai.
© Modern Molosser Magazine. This article may not be reposted, reprinted, rewritten, excerpted or otherwise duplicated in any medium without the express written permission of the publisher.
Thu, 07/05/2018 - 1:01pm