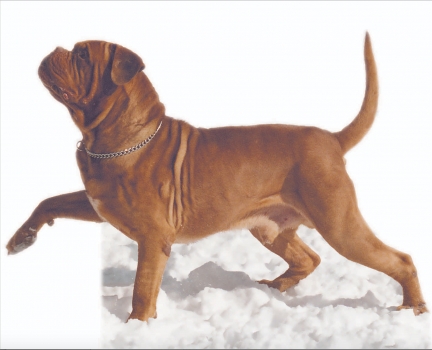 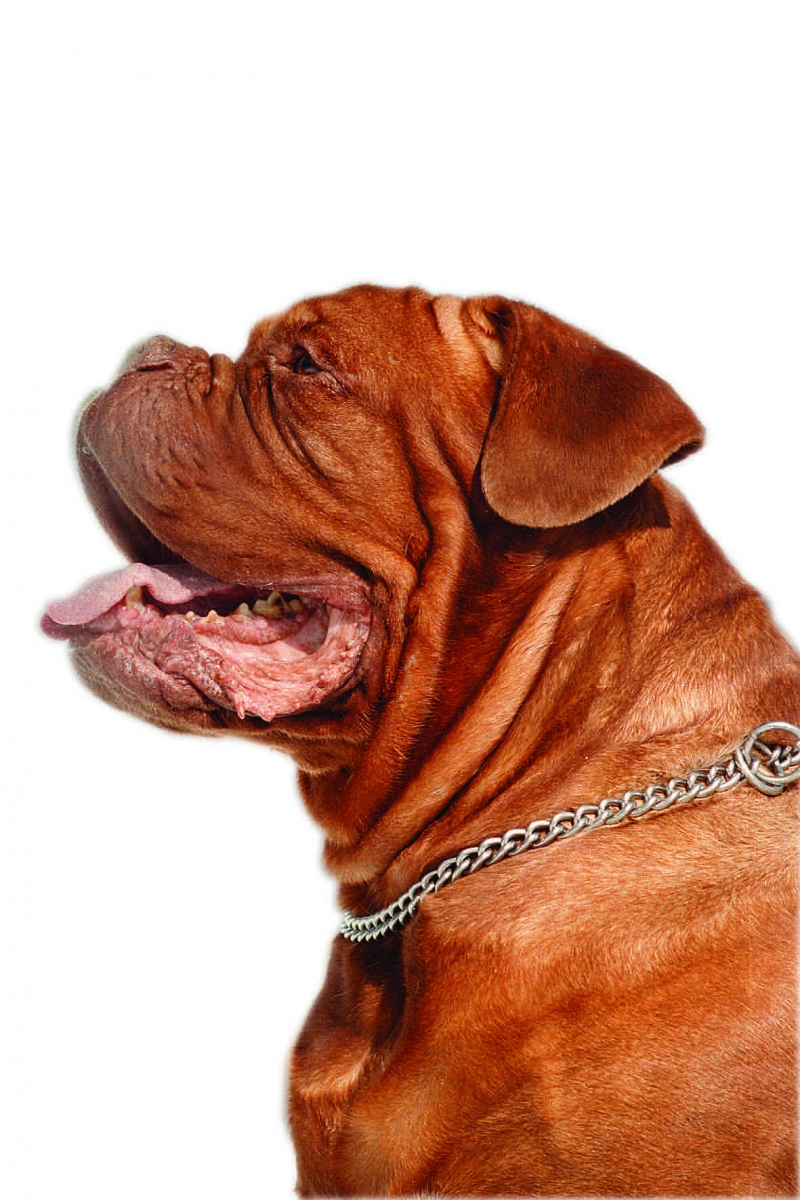 Photos by Alecksey Kalashnikov
Translation by Olga Petrova
Belmondo the Red Powerpack was born in Germany on July 11, 1990. The first time I saw him was in 1994 at the World Dog Show in Switzerland. There, Belmondo was chosen as Best of Breed by Prof. Raymond Triquet, a world authority on the Dogue de Bordeaux, and he became the World Champion. While in Switzerland, I arranged for Belmondo to move to Russia, and after only two weeks he arrived in Moscow. He lived in my house for four and a half years, leaving behind a good many wonderful memories – and wonderful offspring.
It has been almost 20 years since his death, but I will remember this legendary dog until my dying day. When I bought him, I was only aware of his exceptional physical and breed qualities. With fantastic proportions and magnificent movement, he was still a true Molosser – powerful frame, broad chest and beautiful, classic head. He was a bright red color, which certainly added to his charm. But as outstanding as Belmondo’s physique was, it paled before his gentle soul and great character.
In the Dogue de Bordeaux ring at that World Show, Belmondo was shining. It was impossible to take your eyes off him once he started to move. Once his win was announced, a big crowd of participants and spectators swarmed around the owner. Some asked for a business card, some extended their congratulations. I patiently waited, and, once given a chance, I asked the owner if I could reserve a puppy from such a fantastic representative of the breed. When the owner told me he intended to sell Belmondo, I could not believe my own ears. I hadn’t a shadow of doubt, nor the tiniest moment of reflection. I wanted Belmondo!
The two-day train trip to Moscow was long enough for Belmondo’s nature to be revealed. When we boarded, I set a bowl of clean water before him. His eyes on me, Belmondo slowly gripped the bowl’s edge and poured the water on the floor. Completely composed, I grabbed a towel, wiped up the water, and poured him another bowl. He repeated his actions, still earnestly watching me. Only on the third try did he agree to drink.
When I gave him food, he treated it exactly the same way. His very look was saying, “I’m a bad boy! Get me back home.” His behavior did not provoke any negative feelings in me; on the contrary, it was very understandable – after all, he was the World Champion!
In Moscow, my family lived in an apartment in a multistory building with our two Bordeauxs and an old Newfoundland. So, Belmondo’s life changed quite drastically. He had his own sofa, which he very much enjoyed. Belmondo was quite restrained in demonstrating his emotions – a small tail wag represented a great manifestation of his generosity. At times I thought he did not love me at all, just simply let everybody else love him.
A year passed, and one perfectly ordinary morning I went to work. Suddenly I felt terrible, and was taken to the hospital, where I spent three days. For that entire time, Belmondo refused to eat. My mom was worried that “Benya” was sick, and even had a vet see him. When I was returning from the hospital, I happened to run into Mom and Benya walking along the street. He jumped around like a puppy, licking me up and down. His delight knew no limits!
Overwhelmed by emotion, I felt tears pour down my cheeks. It was the first time that I saw such a reaction in Belmondo. When we returned home together, he kept close to me and watched my every move. The event touched me deeply, filling me with gratitude to this loyal and faithful dog.
Late one night, Belmondo and I were returning from a walk. Suddenly, by the building entrance, a harsh, threatening growl came out of Benya’s throat. A big man appeared from behind a parked van. Belmondo lunged at him with a terrible roar. It took all my strength to hold the dog until the stranger ran off and finally vanished behind the corner. The incident made me look at Belmondo through different eyes. For the first time, I saw him as my fierce mastiff defender.
Otherwise, Belmondo was a gentle soul. He permitted anyone to pet him, adult or child. He didn’t clash with other dogs. Once I went to a dog show with my friend Lena, who had Venafro, a Neapolitan Mastiff; and my other friend Lena, who owed a Bullmastiff named Pitmans Bruno. Both women left their dogs with me and went to get their numbers. So there I was, all alone with three huge and powerful dogs, and they didn’t have any conflict between them. Imagine – a Mastino, a Dogue de Bordeaux and a Bullmastiff! It was impossible to forget that moment. The three great imposing dogs had such wonderful characters and were so friendly to one another! 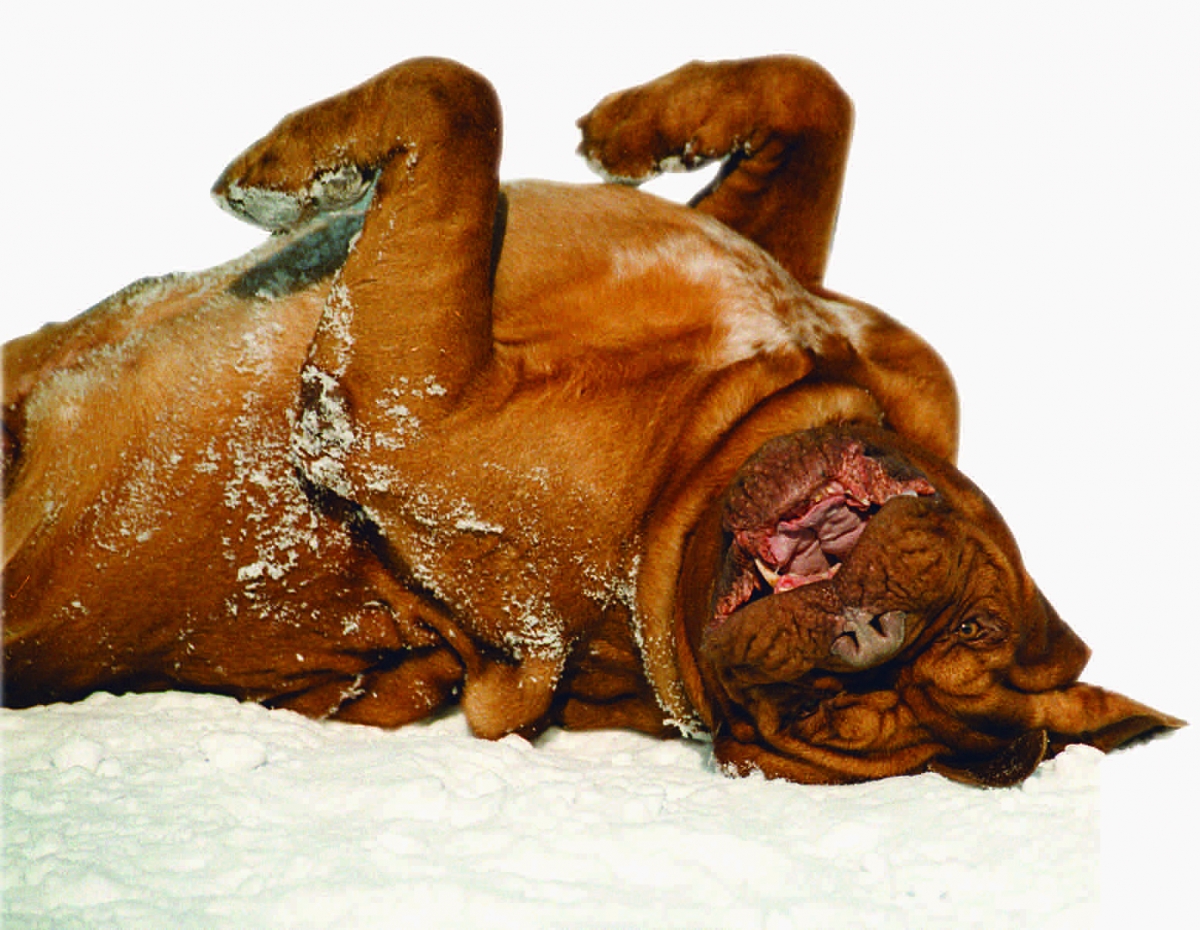 I do not know anything about Belmondo’s life before Russia, other than he was bred in Germany and his first owner was Dutch. I traveled a lot with Belmondo, and he won more than 80 shows both in Russia and Europe. His most memorable Best of Breed wins include the European Dog Show in Holland in 1995; the World Dog Show in Hungary in 1996; and CACIBs in Brno, Czechoslovakia, and Varsovie, Poland, in 1995; and in Vienna, Austria, in 1996.

Until his final days, Belmondo was in great shape. I stopped exhibiting him just before he turned eight. I then started exhibiting his children, who picked up the slack quite successfully. Belmondo consistently passed on his type, color, movement and great character, and produced many worthy champions. The most famous of them was Rano de l’Aube Rouge, who won the French national championship twice. His daughters, the Interchampion Barbie Irene, and two sons, the Interchampions Joker Paris and Byron Irene, lived in my house. Paris, Barbie and Byron were exhibited at World Shows and took several awards. 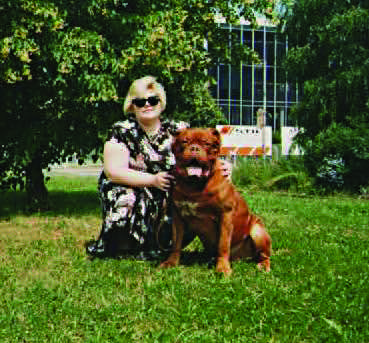 During the four and a half years Belmondo spent in Moscow, he was bred 60 times. The last litter was born after Belmondo’s death at eight and a half. He was still in a great shape, without a single gray hair. Nothing bespoke his coming death.

The only thing I regret is Belmondo’s exceptional resistance to being photographed. As soon as he noticed a camera, he put down his ears and turned away, protesting in every possible way. For this reason, there are very few pictures of him, and the good ones are even fewer.

I could write about Belmondo endlessly. He was not just a dog. He was an outstanding individual, and a phenomenon. I see his appearance in my life as something magical and life-changing. I was buying a pedigree champion, but I got a best friend. He still lives in my heart – Belmondo the Great!

I judged Belmondo first in June 1991, in Dortmund, Germany, in the “youth class.” My first “young dog” was Oscar Van Alcarinque (owned by Mr. Vanderhoven, bred by Mrs. Haenen of Belgium). Oscar was made “Weltjungendsieger” (Young World Champion). I placed Belmondo second. He was a beautiful young Dogue, but a bit long in the body.
I had 66 Dogues de Bordeaux to judge in Bern, Switzerland, on June 12, 1994, a “World Championship Show” that I will always remember: excellent dogs, excellent organization and a very friendly atmosphere and sporting spirit. Dogues and fans had come from all over the world (and for the first time, I think, from Russia). The general quality was excellent: No more long faces, and “monsters” with exaggerated folds that make some Dogues look like orangutans had not yet appeared.
My first male in the Open class of 22 was Idem del Matachin, a beautiful dog born in Spain. My first champion was Belmondo. He was then a strong dog, well balanced, with a typical head and a wonderful, very active, long-reaching gait with a well-sustained back. He was not perfect. No dog is perfect. What we call “daylight,” the distance between the brisket and the ground, could have been less.
I made Belmondo World Champion and Best of Breed. His master fell to his knees, as tennis champions do. Svetlana Dorogova of Moscow asked me, “Is this the best Dogue de Bordeaux of the day?” I nodded. She bought him. Belmondo became a Russian champion and, as in fairy tales, he had many children.
-- Raymond Triquet

Ilona Onstenk-Schenk of the Netherlands  will never forget November 1, 1991.
It was the day she first saw Belmondo.
She was doing her judge’s examination for Dogue de Bordeaux, which required her to examine five dogs and five bitches, then critique each. Belmondo was one of the males, and, at just over a year old, the youngest. Despite the maturity of the competition, Ilona made Belmondo her Best Dog, and Best of Breed.
Then came the inevitable grilling from the tester, who asked why she had given the big win to such a young dog.
“I answered that I’d never in my life seen such a nice Dogue de Bordeaux, even if he was the youngest one,” she remembers. “I said, ‘I see his quality, and today he is far and away the best one for me.’”
Prodded to eludicate Belmondo’s strengths, she did so without compunction: “He was a big boy, had a marvelous, classic head, with a strong, deep and wide muzzle, very strong bone, excellent topline, very good angulation, and he was a good mover.”
At the end of the day, the tester congratulated her and announced that she had passed.
As for her big winner that day, he soon aced an even more exacting test: that of public opinion in the dog world. At a time when the breed was still relatively unknown, Belmondo’s great presence and breed type set a new standard for the Dogue de Bordeaux in Europe, and beyond.
“In no time, everybody in the Netherlands was talking about him: ‘Have you seen that Dogue de Bordeaux Belmondo?’” Ilona recalls, adding that within a year Belmond was named the top dog for 1992 of the Hondenwereld, the Dutch dog magazine.
But Belmondo – whose name means “beautiful world” – was not just a favorite with judges and spectators. Breeders also sought him out.
Pascale Vandermijnsbruggen of Kennel l’Aube Rouge met Belmondo at various shows in Holland in 1992, and was taken by his rich red color, great substance, fantastic movement and excellent head. “Very sweet head with sweet eyes ... a real Bordeaux expression of love!” he exults.
At one show, Belmondo did not place very high because was still immature and had not filled out yet. But he was so striking that Pascal abandoned plans to breed his Piplette de l’Aube Rouge to another dog in favor of Belmondo. “We fell in love!” remembers Pascal, whose breedings to Belmondo produced the very successful Intl Ch. Rano de l’Aube Rouge. (As Pascal notes that Belmondo was “a real gentleman” when it came to breedings, the bitches apparently concurred.)
As our main story explains, Belmondo was sold to a Russian breeder at the 1994 World Dog Show in Switzerland, where he took Best of Breed. Russia’s gain was Europe’s loss, and Ilona remembers feeling deeply saddened when she heard the news. Later, in her travels judging, she saw Belmondo at a Moscow show.
“He will always be in my mind,” she says with great affection. Geography, and even the constant march of time, are but small hurdles in the influence of this great Dogue.
© Modern Molosser Magazine. This article may not be reposted, reprinted, rewritten, excerpted or otherwise duplicated in any medium without the express written permission of the publisher.
Mon, 03/12/2018 - 3:54pm