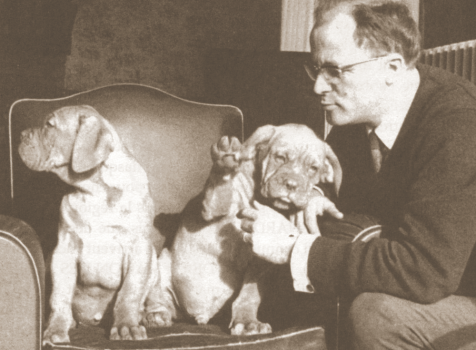 An interview with Dogue de Bordeaux legend Raymond Triquet
For those who truly know the Dogue de Bordeaux, Raymond Triquet needs no introduction. The world’s foremost expert on this eye-catching French mastiff, he wrote the definitive book on the breed, “The Saga of the Dogue de Bordeaux,” not to mention the French modern standard. A now retired professor who taught phonetics, grammar, scientific translation and lexicology at the University of Lille in France, Prof. Triquet was the president of the FCI standards committee for many years. And it is very possible that without him, the Dogue de Bordeaux would not have survived to see this century.
When Modern Molosser debuted as a print magazine in late 2000, we were honored to include the following interview with the man fanciers unabashedly call “the father of the Dogue de Bordeaux.”
You were instrumental in rebuilding the breed in the 1960s. How did this come about?
At the time, I was a teacher in a grammar school, and a pupil of mine came to me and said, “Oh, sir, I saw a dog. He is fantastic.” So I went and faced my first Dogue de Bordeaux, a big, old one. He was like a lion. And I knew immediately it was my duty to help the breed revive. 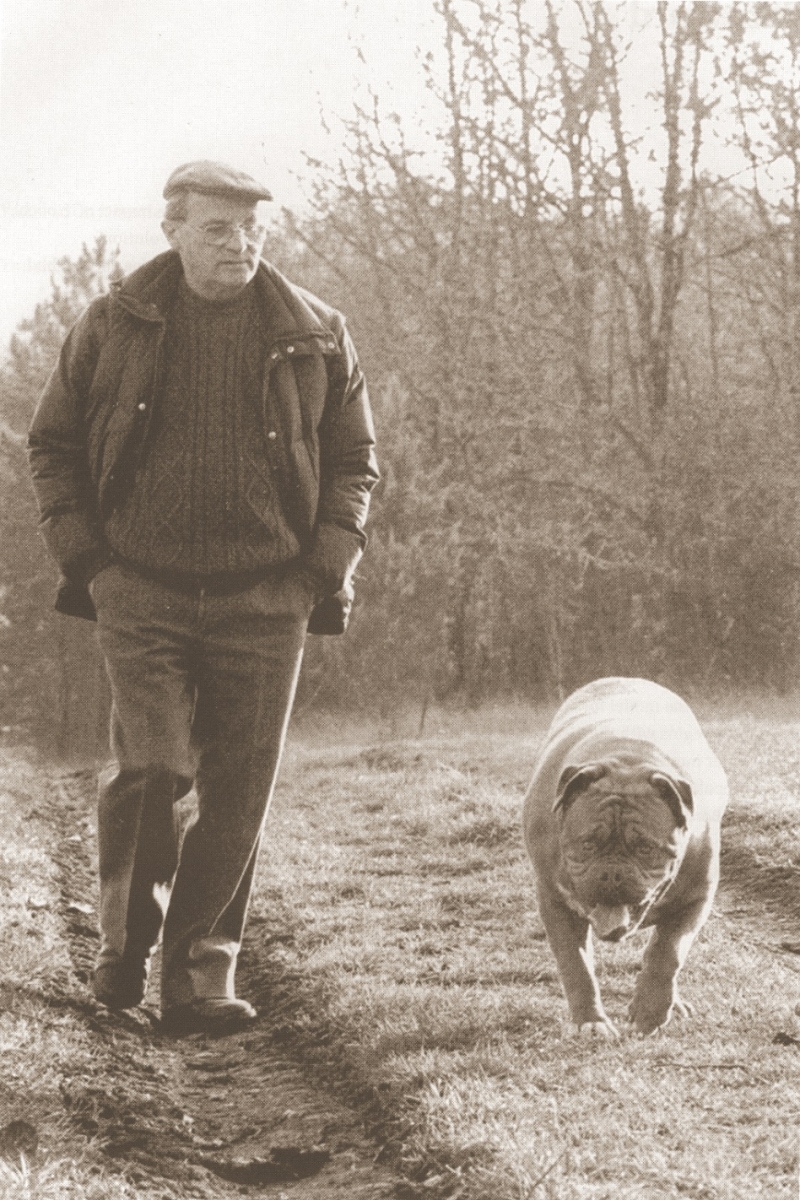 It is said the breed was rebuilt with a handful of dogs. Where did you find them?
There were two breeders left. One bred regularly, the other more erratically, and they disliked each other. I bought a puppy bitch from one. I was very lucky to have her served by an old, beautiful dog from the other strain, who died soon after that. He was 7 or 8 years old, and had never served a bitch in his life, but he could do it.
At that time in France, generally the owner of the male chose a puppy from the litter, what we call the first choice. The owner of this dog crossed France to reach me in the north of France, where I was living at the time, and he chose the best puppy, of course.
I said, “Look, you have a right to choose this best puppy, but are you going to keep it?” He said no, he was going to sell it. And I said, “I am trying to the help the breed, and here you cut the grass under my feet.”
He said, “OK, I will choose another one.” He was a gentleman, marvelous. There are very few left like that in the world.
What happened to that puppy?
That puppy, Mowgli [See photo below —Ed.], became a champion. I started reviving the breed by showing this beautiful dog. People at dog shows, everyone, said, “What is this dog? Is this a breed or what?” 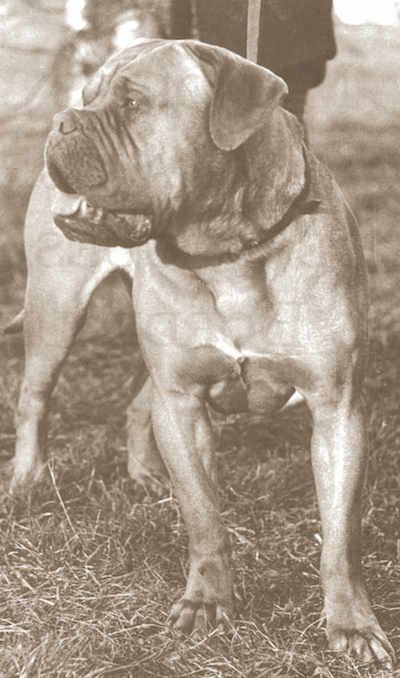 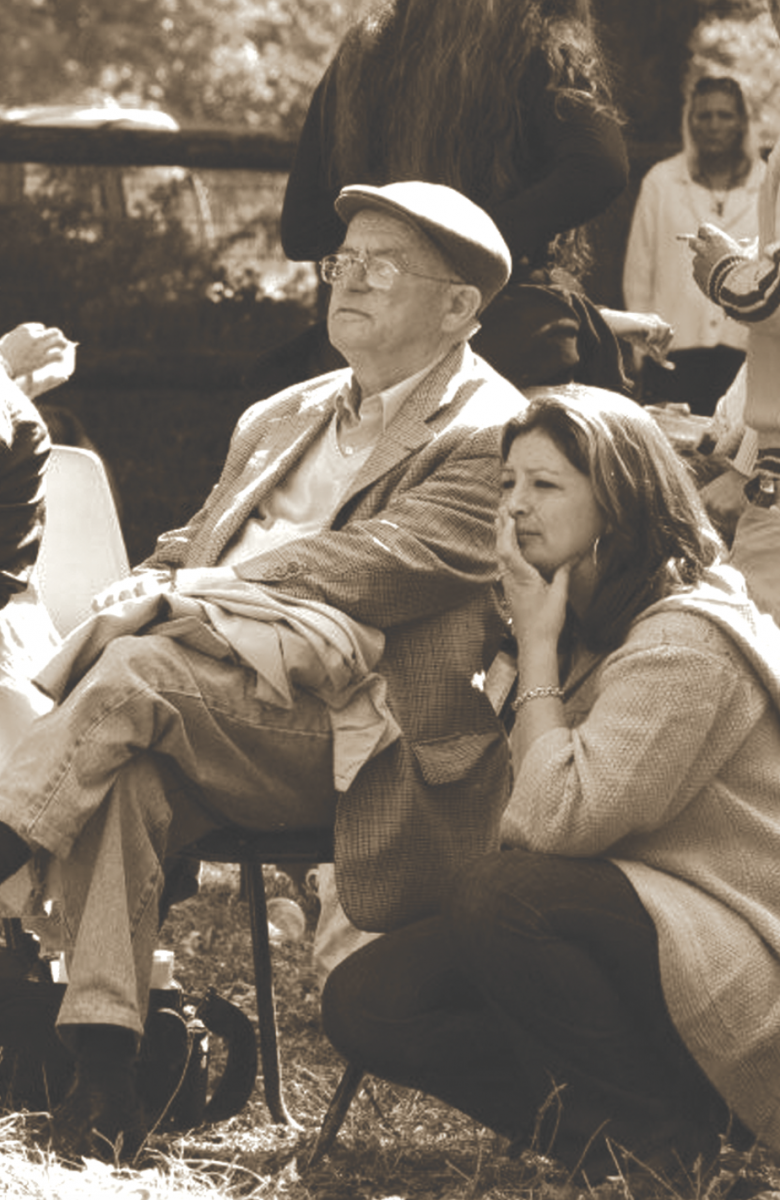 What words in the Dogue de Bordeaux standard do you feel are most often misunderstood?
The shape of the head, the wrinkles and the description of the back.
The head is trapezium-shaped, wider at the occiput than at the level of the eyes, which is wider than at the muzzle. If there is no trapezium shape, then there is the head of the mastiff, which is rounder. Many have that fault.
The Dogue de Bordeaux is wrinkled, no problem. But we do not want “dead” folds like those of bulldogs. The wrinkles of the Dogue de Bordeaux are living – that is, when the dog is attentive, there are more wrinkles, and when it is not attentive, they are fewer and not so deep. And we don’t want that ugly, swollen fold, which we compare to a water pipe, crossing the cheek; this is not normal, and it is due to crossing to Mastini Napoletani and Shar-pei. Cheeks are big, muscled, fleshy, but they should be clean. If there is a fold, it remains discreet, not swollen.
We try to have a topline that is as straight as possible, which means the perfect topline is impossible – it is not normal in the Dogue de Bordeaux because normally the Dogue de Bordeaux is concave. But we don’t want a bulldog, we don’t want a dip. We try to have it as straight as possible for health of the Dogue de Bordeaux and for its movement, too.
You have cautioned against exaggeration in the breed, against an appearance that suggests monstrosity. Where is there the greatest danger of this occurring?
In head type, with too big a head with too short a muzzle and too many folds. Breeders guard against this by being intelligent and honest and humble.
What sets the French mastiff apart from all the other mastiffs in the world?
His trapezium-shaped head, his dissuasive look, together with his tender-hearted personality. But I am no chauvinist.
What is ideal Dogue de Bordeaux temperament?
The Dogue de Bordeaux’s face frightens people. But the heart is golden – very, very tender. They love their masters, and they love their mistresses more. Many males are in love with their mistresses to the point of repelling the husband.
The Dogue de Bordeaux we have nowadays is a very nice dog, tender hearted. Some of them are still very good guards, but if the master has many friends and he greets all his friends, the Dogue de Bordeaux does the same. On the contrary, if the master is what we in French call a bear, if he has no friends and turns everyone out, the Dogue de Bordeaux will do the same. He imitates his master.
Have you bred any other breeds?
I had boxers first. I had one litter, kept one male, who was charming, but not good for shows. I showed him once and I was sacked. He lived to be 12 years old.
Other than the Dogue de Bordeaux, I had bulldogs, but never had puppies. I bought a champion bulldog in England. He cost me a fortune, but he was unable to serve a bitch. Then I bought a bitch and she died in my car. I thought it wouldn’t be hot, but there was nice sunshine, she died after two minutes in car. The male lived to be ten. At that time, we were just beginning to use artificial insemination, and we tried, but there was no result at all. I was cured. I never tried again.
By comparison, the Dogue de Bordeaux must be far easier to breed.
I am astonished to hear, especially from America, about Dogues de Bordeaux that have C sections. I never had a C section with a Dogue de Bordeaux bitch. Now breeders everywhere do simply because they don’t want to get up at night.
I know you won't name your favorite Dogue de Bordeaux, but can you tell us a bit about Belmondo the Red Powerpack, whom you've awarded highly?
I made Belmondo a world champion. I judged the World Championship in Switzerland, and I had 70 to 75 Dogue de Bordeaux, and my best was Belmondo. Beautiful dog. Not exaggerated all, a really a good specimen. And a Russian lady came to me and she said, "Is this one really the best?" I said, "Well, according to me." She went to the owner and said, "I’ll buy your dog." She offered huge amount of money and dog was for sale. He went to Russia and was very, very successful. 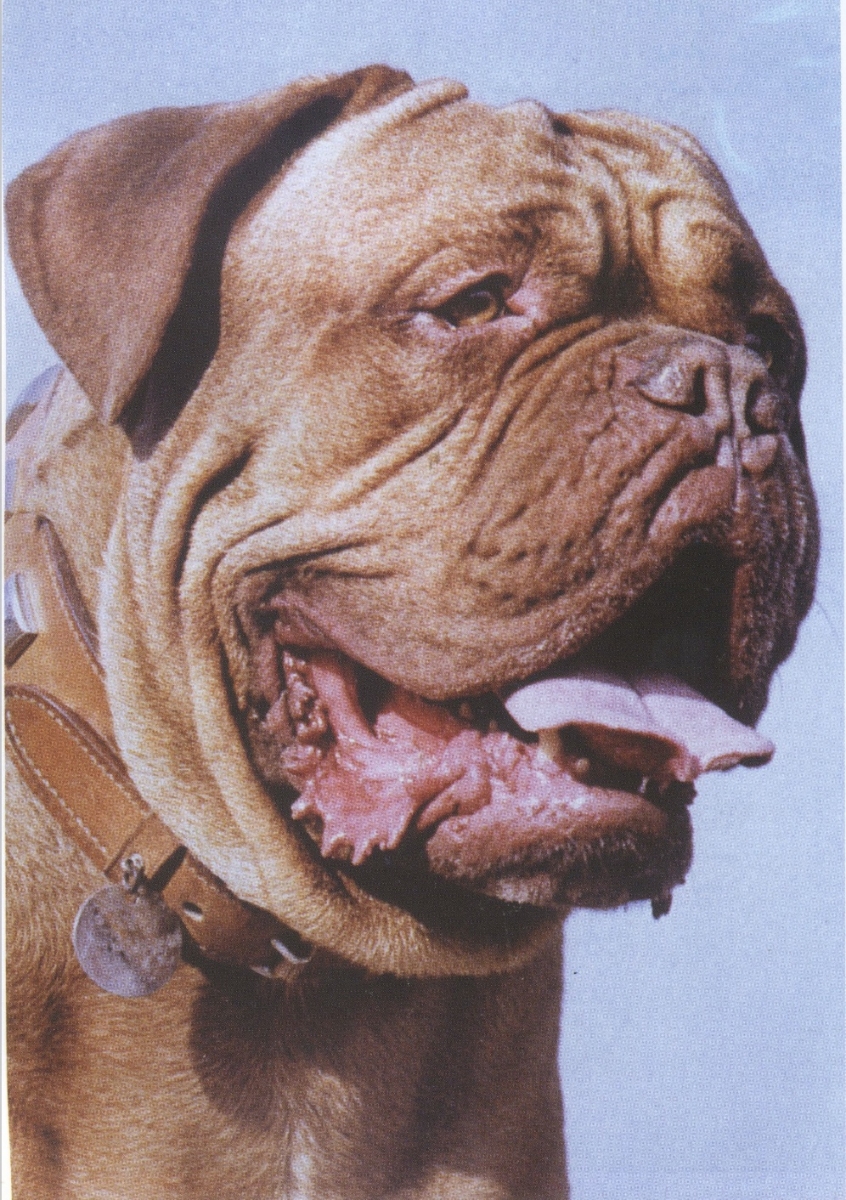