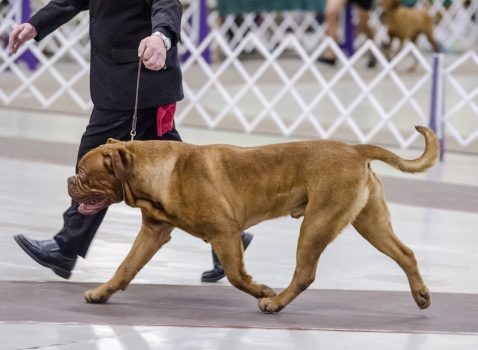 It was a real Modern Molosser moment.

I was ringside at the Westminster Kennel Club Dog Show, watching Dogue de Bordeaux judging. There was the usual assortment of breeder-owner-handlers, as well as some smartly dressed professionals who were “prospecting” in this relatively new breed: This wasn’t their “usual” ring, but a win is a win, isn’t it?

When you know a breed, even flirtatiously, it can be deeply offensive when it is presented in a fashion that contradicts its basic character and purpose. And that was what I was seeing in front of me: a professional handler, wildly successful in Hounds and Sporting dogs, collar-popping the Dogue de Bordeaux special at the end of the lead in an attempt to get the dog to elevate its head as they moved around the ring.

The FCI Dogue de Bordeaux standard is very clear on how this front-loaded breed should move, and the AKC standard parallels this description almost exactly: "When the trot quickens, the head tends to drop, the topline inclines toward the front, and the front feet get closer to the median plane while striding out with a long reaching movement of the front legs." (Emphases mine.)
Yet here was this handler, correcting a Dogue for exhibiting a breed-appropriate trait at the gait – a slightly lowered, and not raised, head.

I did not vault across the velvet-rope stanchions and issue a lecture, as I valued my Westminster press pass above any sense of moral indignation. And so this article, a couple of years tardy, is the next best thing: a reminder that the Dogue de Bordeaux has a very distinctive gait – one that is decidedly not compatible with the “periscope up” carriage that has become so desired in the show ring. A Dogue is not a Saluki – why should he move like one?

Long before the breed was recognized by the American Kennel Club, Dogue fanciers overseas fretted about the American tendency to “improve” any new breed that comes their way. Capitulating to the magnetic pull of the group ring, many U.S. handlers tend to push a breed into a more generic presentation so it can be “competitive” – even if that direction is antithetical to the essence of the breed.

“One danger with the Americans, you know, is even if they don’t change standards, they change dogs,” Dogue de Bordeaux icon Prof. Raymond Triquet told this magazine back in 2009. “I tell you, frankly, that when you give the Americans a dog, they turn it into another breed in 10 years’ time.”

So far, Triquet said, that hadn’t happened with the Dogue, thanks in large part to the parent club’s insistence on bringing in European judges, “real connoisseurs of the breed,” to keep type on track.

And not all the changes are for the worse, he noted.

“The movement of dogs in America as a whole is much better than in Europe. No doubt about that,” Prof. Triquet agreed in that interview. “The danger is to have all dogs moving like Afghan Hounds, which is not natural at all. Americans train their dogs very early and quickly. And so the dogs generally have a very good action, but sometimes much too supple, flowing, light, because the Dogue de Bordeaux cannot be light.”

So far, the American tendency to drift in the direction of more “elegant” – which in the end means lighter boned and more refined – also hasn’t happened with the Dogue de Bordeaux. These are still substantial dogs, true Molossers.

And their gait should reflect that. At the trot, the Dogue – which has so much mass concentrated in its forequarters – should be expected to have a head that drops, and sometimes the topline with it.

Above are some video clips of “Skye” (Multi-Ch. Tyrannus Skyejacked by Emberez), a British-bred bitch that has won just about everything there is to win in Dogue circles. Her movement is certainly typical for a Dogue, and her head is not elevated. The final video segment contrasts her movement to that of the Great Dane behind her – a striking example of how the “flashier” movement of other breeds might tempt handlers to fiddle with theirs. When a breed is recognized by the American Kennel Club, two things almost always improve, if they were ever lacking. And that is temperament and movement. Intolerance for any sign of aggression during the exam means that most U.S. show dogs are at least trained to suppress any desire to bite or growl. (This is the main reason why the Fila Brasileiro will likely never see AKC acceptance: The AKC system simply cannot accommodate a breed that not only should not accept the touch of a stranger, but needs to be disqualified for doing so!) But arguably this can also be taken too far, when extreme “showiness” can defy a breed character that is supposed to be noble and reserved. Indeed, the AKC standard for the Mastiff was amended to note that while shyness or viciousness should never be condoned, “conversely, judges should also beware of putting a premium on showiness.” Americans also tend to make breeds sounder, demanding a degree of efficiency at the gait that many overseas countries are willing to forgo in the face of desirable type. Again, this is probably due to the demands of the American group ring: Plodders are outshone by exuberant trotters who display that unfortunate acronym, TRAD (tremendous reach and drive), even if such a gait is not correct for their breed. This emphasis on movement can even force a change in breed silhouette: Are Bullmastiffs, which are supposed to be almost square, getting ever-more rectangular (a real no-no, as it is a reversion to Mastiff type), because it is far more difficult to breed a square dog whose front and rear do not collide at the trot?

© Modern Molosser Magazine. This article may not be reposted, reprinted, rewritten, excerpted or otherwise duplicated in any medium without the express written permission of the publisher.
Tue, 08/18/2015 - 10:08pm