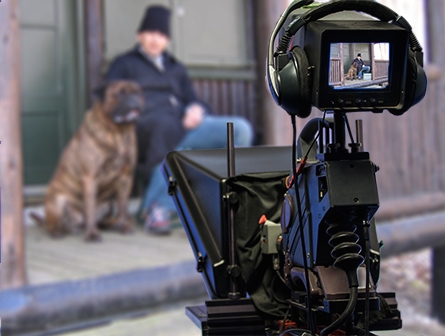 Ready for My Close-Up

One of the most athletic of the Molosser breeds, the Bullmastiff evolved a unique job description as he accompanied British gamekeepers on their estate rounds: He needed to pursue, knock down and hold a poacher, but not savage him. The gameskeeper, after all, needed his quarry alive.

Knowing this 19th Century breed history, Mette Sorensen of Kennel Librrani in Soro, Denmark, was frustrated by misconceptions about exactly what her dogs were traditionally used for. “Unfortunately, many people in Denmark think that the Bullmastiff was bred for dog- or bullfighting,” she says. Determined to share the Bullmastiff’s admirable past – and knowing that a picture, especially a moving one, is worth a thousand words – she decided to bring the “gamekeeper’s night dog” to the screen. Astrox in character as a 19th Century nightwatchman’s dog (above) and with a friend (below). Her chance came in 2006, when she enlisted some visiting friends to help make a mini-movie. The entire production took three days: one to write the script, one to film and the final day for editing.

The resulting three-and-a-half-minute video has been viewed on YouTube more than 21,000 times, and has been used in educational seminars around the world, sometimes to standing ovations. It stars Sorensen’s then-3-year-old brindle male, Multi-Ch. Librrani’s Astrox, who came out of her first litter in 2003. The unlucky “poacher” was the other half of Libbrani, Imran Durrani.

The four-legged leading man was a quick study. “Astrox enjoyed playing, and it was easy to teach him new things if he found it funny,” Sorensen says. He also loved to jump on things, whether it was people, furniture or the kitchen table. “So we weren’t surprised at how Astrox responded when Imran shown him a few times that he was actually allowed to jump on him, this time,” Sorensen says. Above: Filming the downing of the “poacher.” Right: Poached eggs with the poacher? Astrox begs some breakfast off Durrani. Getting Astrox to offer the all-important wrinkled expression as he heard the poacher off in the distance was another story, however. When alerting, a Bullmastiff furrows his brow; the gameskeeper, his hand placed lightly on the silent dog’s head in the pitch-black darkness, learns from this wrinkling about the presence of a poacher.

But instead of looking intently whenever the filmmakers made a sound to catch his attention, Astrox insisted on running off the porch and toward them every a few seconds. “As a last attempt, Imran actually climbed halfway up a tree and started to make noises and shake the leaves,” Sorensen remembers. “We thought that Astrox would run off again, but he stood there for so long, trying to locate where the funny noise was coming from, and we got exactly what we needed.”

Astrox just so happened to be a brindle, and it pleased Sorensen to be was able to highlight the historically correct color pattern. The early gamekeepers were said to favor brindles because they blended more inconspicuously into the vegetation. In addition to highlighting the breed’s tenacity, the video reminds that agility was also needed for the Bullmastiff to do his job.

Comments on the video have varied from rave reviews (“Absolutely brilliant!” “Love it! Poachers beware!”) to a smattering of naysaying: “The part about ‘with no biting’ isn’t exactly accurate,” griped one YouTuber. “The true Bullmastiffs of the past wore muzzles while working – that’s the only reason they did not bite,” kvetched another. “And they looked nothing like the type of Bullmastiff being bred today. Look up the old dogs of the night watchmen.”

While some purists might quibble about historical authenticity (19th-Century gamekeepers didn’t carry air guns, either, though the filmmakers note they had to use the props they had at hand), the Librrani video scores one huge accomplishment: It reminds fanciers of the roots of this magnificent breed, and invites them to look backward, so they can more deliberately plot the future ahead.

© Modern Molosser Magazine. This article and video content may not be reposted, reprinted, rewritten, excerpted or otherwise duplicated in any medium without the express written permission of the publisher.
Mon, 08/03/2015 - 8:51pm