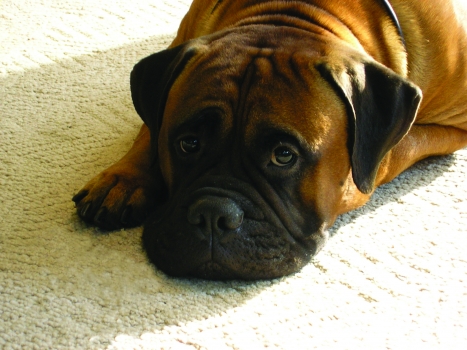 "Pyometra" is a dreaded diagnosis for Molosser breeders
By
Chris Rasmussen
“They told us in vet school, ‘Never let the sun set on a pyo,’” the young veterinarian said.
My heart sank. It was about 4 p.m., and I had spent the day ringing my hands over my beloved “Roo,” a 6-year-old Bullmastiff who had started having vaginal discharge around noon. It was a Saturday, of course, and my regular veterinarian was closed. I found a vet office about an hour away that had weekend hours, and got the earliest appointment they had. 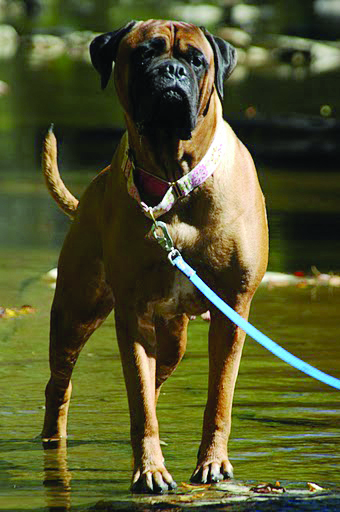 Pyometra is a condition affecting intact bitches (and sometimes spayed bitches, whose uterine “stump” becomes infected). It can happen to any bitch, regardless of age, on her first season, or her fifth. Generally occurring six to eight weeks after a season, pyometra results from bacteria from the vagina that enters the still-open cervix and grows in the uterus. The condition can range from serious to deadly, and should never be taken lightly.
The purulent discharge wasn’t Roo’s only symptom. Her temperature was very slightly elevated, and she was just a little less active than her typical bouncing-off-the-walls self. She had an appetite, but only for things extra-tempting, like ground beef and chicken.
I knew a little about pyometra, but my knowledge was all anecdotal, garnered from other breeders in casual conversations. I knew that drainage probably meant that Roo had an “open pyo,” meaning the pus that filled her infected uterus was draining. The other version of the condition, “closed pyo,” means that the engorged uterus is unable to drain. With an untreated closed pyo, the bitch’s uterus can burst, much like a human with appendicitis.
“I always consider pyo with any ‘off’ bitch that’s intact,” says veterinarian and Bullmastiff breeder Dr. Sandra Statter. “Usually there’s some sign of illness – not eating, lethargic, fever – but I had a bitch that showed no clinical signs until ‘the big gush.’ She ate breakfast as usual the same day she had pyo surgery.  I feel this is one of the ‘problems’ with our breed – they’re too stoic for their own good!”
The general and most common treatment for pyometra is spay. I had planned to try to breed Roo once more after two unsuccessful breedings on her last two seasons. In the end, the timing wasn’t right, so I planned to spay her, but she came into season early. The pyo struck about six weeks later.
I stood in the office of the vet who was able to see me that Saturday and weighed my options. She had suggested taking Roo to the emergency veterinarian a few miles from their practice.  I was reluctant to take Roo to an unknown vet, wanting desperately to take her to my reproductive specialist who had years of experience under his belt, and whom I trusted implicitly. On the other hand, I was terrified of delaying treatment and putting Roo at risk.
The emergency spay, the veterinarian told me, would cost $3,000 to $5,000, and would require several days in the hospital for Roo. While I am certain there are some terrific emergency vets out there, I have had some very unfortunate experiences at e-vets, and once lost a dog who was being hospitalized overnight, so I really didn’t want to leave Roo at the emergency clinic, particularly one an hour away from my house. I knew it was a risk, but I decided to take Roo home with me. The vet gave me antibiotics and instructions to check Roo’s mucus membranes every two hours. (I think I did it at least every half an hour.) My intention was to take her to the emergency vet near my house at the first sign that she had taken a turn for the worse.
She never got any worse, thankfully. Her tail wagged and as usual, and she planted herself near the cookie jar in the kitchen, willing me to give her some sympathy cookies (which she promptly got). 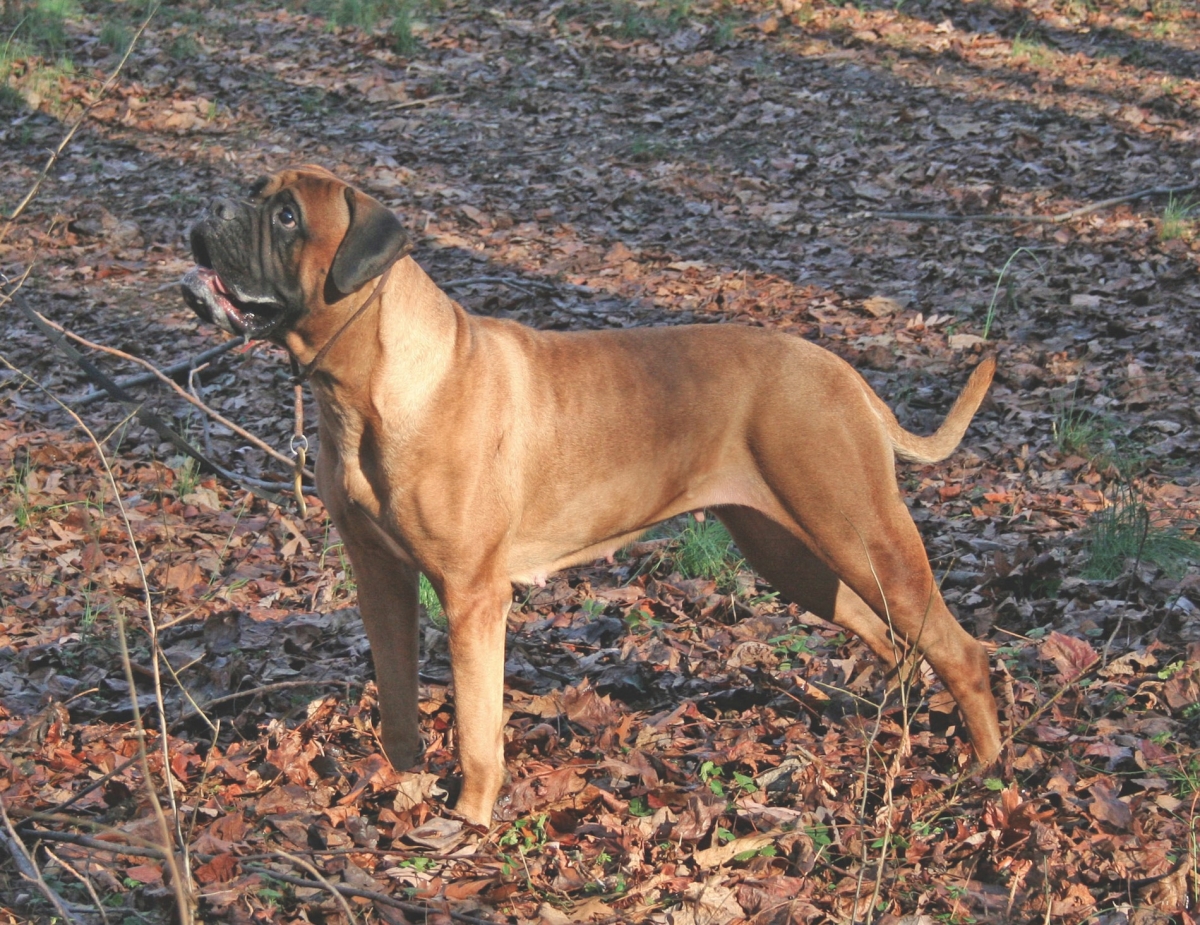 Not everyone chooses to spay bitches who have pyo.  A young or particularly valuable breeding bitch can be treated, but the course of treatment is not inexpensive and can be difficult for the bitch.
Sandy Durachka of Stevensville, Md., experienced pyo with her first Bullmastiff bitch, Bettie, who developed it after her second season. Sandy first brought Bettie to her emergency vet because she was lethargic, refusing food and exhibiting excessive thirst. The e-vet diagnosed Bettie with metritis, an inflammation of the uterine lining. They sent Bettie home with antibiotics and Sandy continued to watch her carefully. A few days later, Sandy noticed Bettie’s swollen belly and
was worried she was bloating. She took her back to the e-vet, who ultrasounded her, diagnosed pyometra, and wanted to spay her on the spot.
Sandy co-owned Bettie and didn’t feel comfortable spaying her without consulting her co-owner. Bettie was also Sandy’s hope for a future in the breed, and Sandy had already begun studying pedigrees and planning the breeding of her beloved and promising bitch. Sandy took Bettie home  and   the following day, she took her to a reproductive veterinarian a state away. The veterinarian, who had a tremendous reputation as a leader in her field, told Sandy she could treat the pyo but it would mean hospitalizing Bettie for a week and would cost somewhere between $4,000 and $8,000 and would cost an additional $4,000 to breed Bettie on her next season. As much as we hate for money to be a factor in considerations of our dogs’ health, it simply is, and Sandy couldn’t spend $12,000. The consultation and ultrasound alone was $500, and Bettie wasn’t a step closer to getting better.
Sandy took Bettie to another repro specialist, one closer to her home, and recommended to her by another breeder. He treated Bettie over the course of six weeks, allowing Sandy to perform much of the treatment herself at home to save money. Bettie was put on Ciprofloxacin, an alternative to the costlier Baytril, for six weeks. She was also treated with lutalyse, a drug frequently used for reproductive issues in cattle. The lutalyse, injected intramuscularly and was given three times a day for the first week, twice a day for a second week, and once a day the third week, made Bettie vomit about five minutes after giving it. Sandy returned to the vet with Bettie every week for an ultrasound to monitor Bettie’s progress, and for these, she was not charged.
Sandy estimates that the entire treatment cost her about $600. Bettie recovered fully and was successfully bred the following season, which resulted in two healthy puppies. When I asked Sandy if she would do it again, she thought for a minute before answering.  “I would do it again to save a ‘spectacular’ bitch. At no point did I feel that Bettie’s life was in danger. She was just a little off.”
In Roo’s case, I was able to see my reproduction veterinarian, a specialist in theriogenology, on Monday. Dr. Roskin performed an ultrasound and we could clearly see Roo’s uterus was filled with pus. He was impressed with how well she was doing despite her condition – so much so that he elected to perform the spay the following morning so that Roo could be observed in their clinic during the day and, if she were well enough, I could take her home that same afternoon. Dr. Roskin performed the spay early Tuesday morning, and said that Roo’s pus-filled uterus weighed eight to nine pounds!
I am delighted to report that Roo recovered from the surgery beautifully and continues to request “sympathy” cookies, which she always gets. 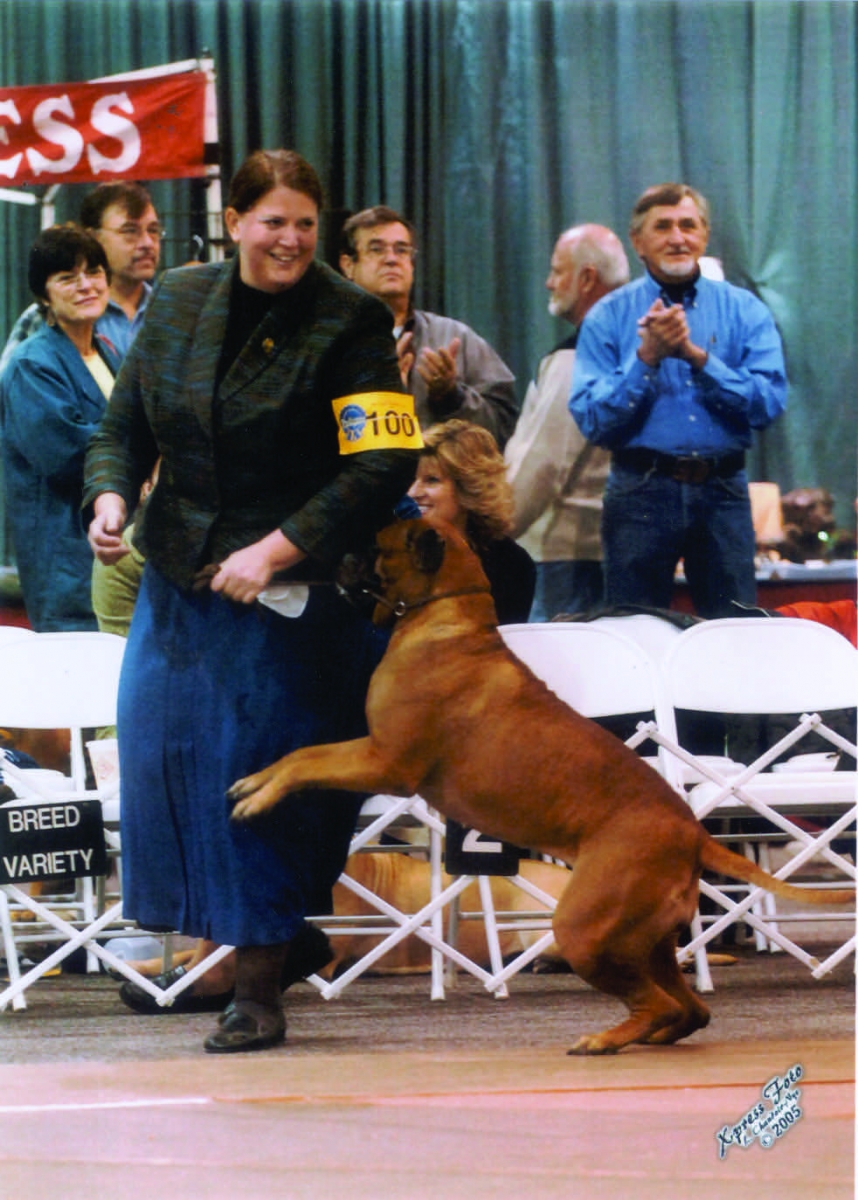 Chris Rasmussen of ExLibris Bullmastiffs in Bradywine, Md., started her search for a “big dog” at the Annapolis Dog Show in 1994. She had narrowed it down to Doberman Pinscher, Great Dane and Bullmastiff, which she saw first. While she was talking to his owner, the dog sat on her feet, looked up at her, and sealed her fate in this breed. Chris is active in the American Bullmastiff Association, having served as its first vice president and webmaster for four years, and its pubic-information chair four years previously.
© Modern Molosser Magazine. This article may not be reposted, reprinted, rewritten, excerpted or otherwise duplicated in any medium without the express written permission of the publisher.
Mon, 03/26/2018 - 12:22am