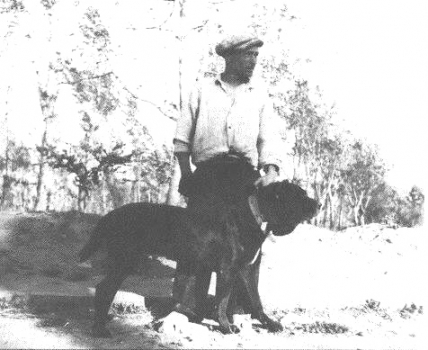 Neapolitan Mastiff from the 1930s.

The Mastino of a half-century ago is almost unrecognizable today
By
Nicola Imbimbo
All dog breeds, over the course of time, undergo morphological changes that are caused by either environment or genetics.
Environmental changes are the result of the changed conditions of breeders, including improvement of human food, which in turn has altered the Mastino.
In the 1960s, during my first visits to the land of Vesuvius in search of the “cane é presa” (roughly translated from the Neapolitan as “bite dog”), kennels were based on carbohydrate-rich diets: cooked pasta with the rare scraps of meat or vegetables. That diet produced specimens with dry and agile constitutions, little subcutaneous tissue, and hardly any body fat. 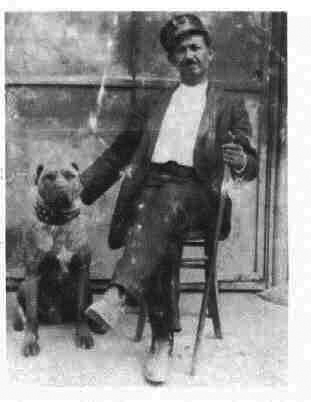 An early image of the dog we have come to know as the Neapolitan Mastiff.
In addition to this diet, genotype was affected by the Mastino’s use as a powerful and active guard dog to protect homes and livestock. Selection was based on both physical endurance and the dog’s disposition toward the work, which required great physical effort. For decades, this genotype and the quality of various heritable characteristics remained unchanged.
The economic boom of the 1970s and ’80s, and the politics of consumption, pushed the habit of excessive consumption of meat animals. Consequently, meat meal –  and in particular poultry byproducts – found their way into the diet of the Mastino. These foods are rich in protein and fat, as well as substances that stimulate the fast growth of poultry, and in turn in the dogs they produced a push of rapid growth, making the Mastino “leaven.”
The exhibits presented most often at dog shows, and the majority of those who had earned the title of champion, became recognized as the preferred type of Mastino, providing a model with their tremendous bone, barrel chests, great substance, and loose and abundant skin that have become characteristic of type.
The economic boom of years ago gave this impetus, and the urgent desire for well-fed puppies that are full of wrinkles pointed selection toward those characteristics.
The extremely rapid change in the genotype, which was directed solely toward the enhancement of aesthetic qualities, was not followed by equal care in improving the skeletal and muscular construction of breeding stock.
No attention has been paid to degenerative diseases such as hip and elbow dysplasia or other pathologies, which, as a consequence, have led to a weakening of the construction of the Mastino.
An ever-richer diet and the use, without veterinary supervision, of anabolic steroids, have contributed to further increase in weight that has gone unchecked, resulting in dogs that are inflated like balloons. 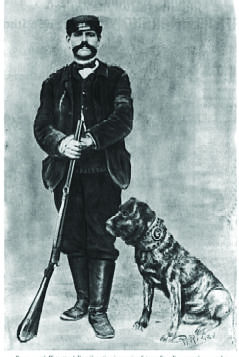 Another early dog, likely from the 1920s.
The Mastino, now so dramatically modified in his morphology, has almost totally lost his functional use, as well as his interest in engaging in work such as guarding and surveillance of livestock. No proof of correct character has ever been required in order to earn the title of champion, leaving an unbridgeable gap.
The breed was so completely transformed in such a short period of time that it has, consequently, also lost its reproductive ability.
Only a memory is left of the dog of the “Muntagna di Zì Francisco” (“the Mountain of Uncle Francis”), who could cover two bitches in one day with no help, neither physical nor pharmacological.
Bitches have lost their maternal characteristics, becoming increasingly larger, with underweight puppies and the inability to feed them, which has led to the habitual use of wet nurses and bottle-feeding.
Excessive wrinkling has led to degenerative diseases, resulting in traumatic keratitis and visual impairment.
Excessive dewlaps have become the rule, as well as overdone lips, and along with them mastication problems because of the absence of the premolars.
Hypertype has always triumphed over construction and soundness in the Mastino. Today few subjects are in a condition to be capable of performing their guarding function, with the ability to have control and surveillance over their property.
Looking over old photos that depict the dogs of the 1970s and ’80s, I see my history in dogs, the visits to farmers who still took into account the dog’s ability to function. The dog without the proper temperament or work ethic was excluded and regarded as worthless. “Nù serve” – if a dog does not function, he has no usefulness.
The standard drawn up by the judge Fabio Caielli, which drew almost entirely from that of Dr. Ruggero Soldati, who had measured and cataloged countless subjects in the 1940s, has remained unchanged for all these years, except for minor changes by Dr. Mario Perricone regarding the teeth in 1989.
I wonder how we could bring under the original standard all the dogs that have come and gone over time, earning champion titles from 1950 until today, with so much diversity in their construction and expression.
Type has been changed completely, and I would say the breed itself has changed. In the early 1970s, the “Italian mastiff,” as early breed enthusiast Piero Scanziani called the Mastino, could be easily identified as the modern Cane Corso; he carried only a few more wrinkles of expression and was more in keeping with the standard.
Today, under that same standard, we have dogs that are totally different in their design, bone, head, wrinkles and dewlap, but above all a body mass and a loose skin that we have invented to cover everything we need to hide under it. 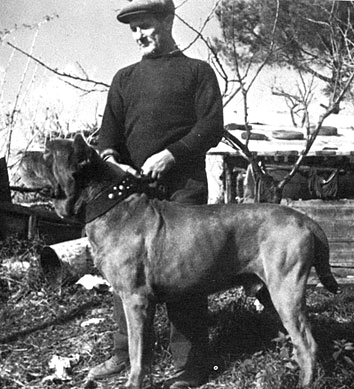 The mythical Masaniello (Masaniello d’a muntagna), the greatest Neo stud dog of the 1980s.
My first experiences as a dog fancier were in breeding Neapolitan Mastiffs, always with the pleasure of having a dog who was also a companion and a partner. I have lived for years in an isolated house in the country, and never been visited by thieves for as long as I have had Mastini. My best memories are the walks in the mountains with two or three Mastini pulling me up the steepest climbs by their leashes.
I am linked to the Mastino with a story that is part of my life. I look back nostalgically to the past and feel a surge of anger when, in a ring somewhere in the world, I see our Neapolitan Mastiff unable to do two laps around the ring without collapsing. 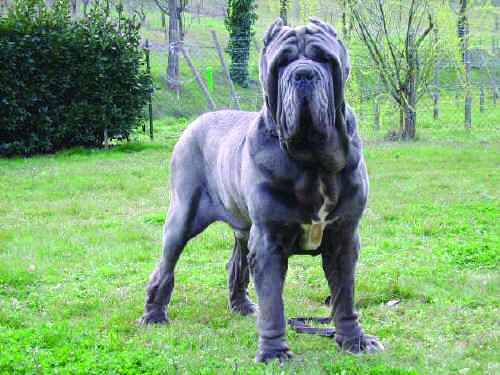 Neapolitan Mastiff with the correct balance between type and harmony of construction.
Sometimes I have the pleasure of seeing a dog that is simply a good, typey synthesis without exaggeration, combined with proper construction, and muscle tone and solidity of joints that is expressed in movement that is harmonic and typical.
I think this is the goal today. The FCI has placed several dog breeds under scrutiny, including our Neapolitan Mastiff. In Sweden at the HUND show last year, at the end of my judging I had to complete a questionnaire describing the ocular and dermatological diseases of the Mastiffs and Mastini that I found on examination of the entries I judged. 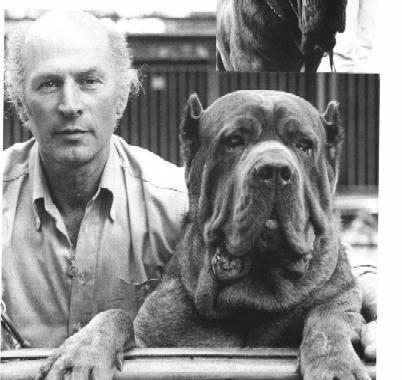 Mario Querci.
A Mastino with correct type and good health makes me feel the emotion of a time when I was enchanted watching the breed that was a source of pride for the South and for all of Italy. We have exported all over the world, and all the dog world envied us when that great dog of the breed, Europa Ch., World Ch., It. Ch., Int. Ch. Caligola di Ponzano, took Best in Show in Dortmund in 1991.
A properly constructed Mastino, with good movement and correct type, makes me feel rewarded for my sacrifice and that of so many breeders who have dedicated part of their life to this breed, first among them Mario Querci. 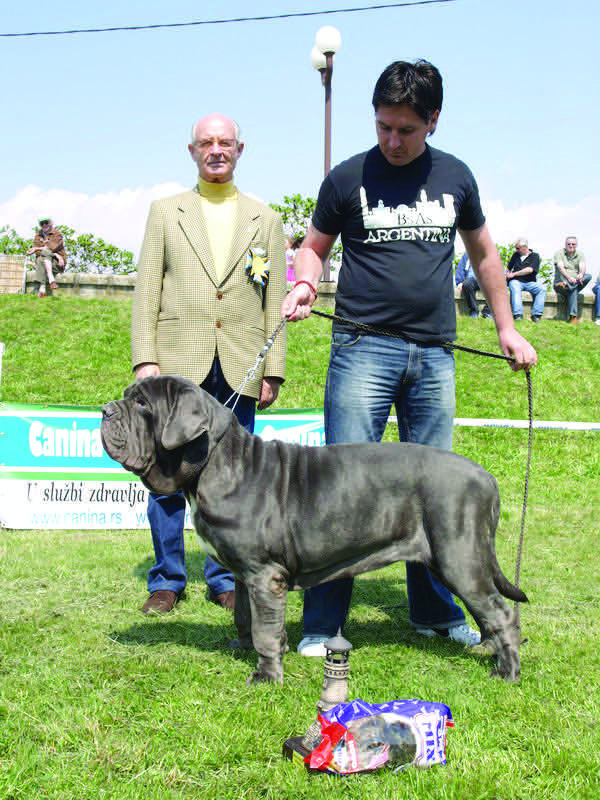 An oncological surgeon, Nicola Imbimbo of Avellino, Italy, began breeding Neapolitan Mastiffs in 1970 under the “Dei Maraveti” and “Dei Novesoldi” suffixes. He is the author of two books about the Mastino, and has published numerous articles about canine genetics that have been translated into many languages. An all-round FCI and ENCI judge since 1970, he has judged all over the world.
© Modern Molosser Magazine. This article may not be reposted, reprinted, rewritten, excerpted or otherwise duplicated in any medium without the express written permission of the publisher.
Sun, 04/01/2018 - 9:07pm