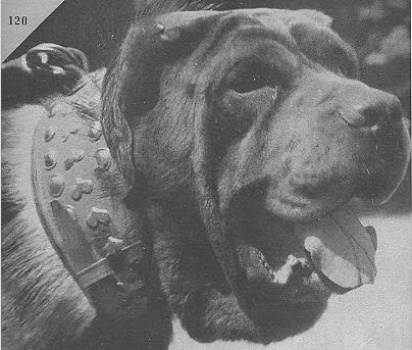 Meet Guaglione, who sparked the standardization of the Neapolitan Mastiff in the 1940s
By
Denise Flaim

History, of course, is a continuum, with no real beginning, or end. But if we were forced to point to one pinprick in time when the Neapolitan Mastiff began as a recognized breed, October 12, 1946, is as good a date as any.

The occasion was the first postwar dog show held in Italy, at the Castel dell’Ovo, or “Egg Castle.” A seaside fortress on the Gulf of Naples, the castle got its name from a legend that Roman poet Virgil put a magical egg in its foundation to ensure it would stand against all foes. Maybe that ancient talisman still keeps guard under those blankets of stone so many millennia later. And if it does, it would have been working overtime to bolster the Mastini at that show more than 60 years ago, as the organized dog world greeted them with nothing short of mockery. The Castel dell'Ovo in Naples, site of the first show where the Mastino Napolitano was exhibited, in 1946.

The eight cani da presa exhibited on that pleasantly warm day at the rectangle-shaped castle had been gathered there by veterinarian Ruggero Soldati, who was originally from Treviso to the north. He is the often unsung catalyst for all that was to come, having noticed this type dog for years in his rounds in the countryside; a decade earlier, before the war, he and his colleague Giulio Durante measured and documented a number of the Molosser-type dogs in the area. The dogs at the show varied in size, in color (from gray to black to brindle to blue) and in body style, reminiscent of everything from German Shepherds to Dogues de Bordeaux. In fact, they differed in just about every trait except their relatively loose skin, equally relaxed gait and generally poor condition.

The Swiss journalist and fancier Piero Scanziani was on hand to witness the display. Immediately, his eye was drawn to a dog named Guaglione, which in the Neapolitan dialect affably means “kid” or “guy.” Guaglione was a template for the early Neapolitan Mastiff.

Scanziani was smitten by the “blue, mighty” dog, who transported him back millennia. “I recognized him instantly; he was one of the hundreds that Paolo Emilio, the Macedonian, had brought from Rome to his triumph. He was the great dog of Epirus, son of the Assyrians, nephew of the Tibetans. He was the Molosser,” he wrote rather floridly. “From this height of centuries past, Guaglione stared at me, impenetrable, with eyes that were neither kind nor hostile, a look that does not give and does not ask. It just gazes.”   (Apparently, Guaglione was also gazing at the Boxer at Scanziani’s side, Arno von Turnellen, silently contemplating what he could accomplish if not for the encumbrance of the leash holding him back.)

Contemporary accounts of Guaglione do not stress his soundness, though it is evident in photographs of him, both standing in a natural stack and even hurtling across obstacles. He is to the modern eye a very plain dog, lacking the characteristic wrinkling that is today synonymous with the breed. In many photos, Guaglione wore the traditional wide beaver-fur collar, which pushed up the loose skin at his throat, accentuating the few wrinkles he did have.

Scanziani’s appreciation of Guaglione was not shared by the judges, who were “from the north,” an important distinction in this lattitudinally conscious country. They were led by the celebrated zoologist Professor Giuseppe Solaro, who was instrumental in the recognition of a startling number of Italian breeds, having written the standards for the Maltese, the Cirneco dell’Etna, the Bracco Italiano and the Maremma Sheepdog, among others.

The Mastino supporters had hoped the judges could see past the dogs’ deprivations of daily living, and recognize them as the descendants of an ancient family of Italian Molossers that had lived at the foot of Mount Vesuvius and its environs for centuries. But instead what they got was nothing short of derision.

“In vain I showed them Guaglione and spoke of the old molossus,” Scanziani wrote about the judges, who only sniggered at his explanations. “The most authoritative of the judges decreed: ‘The breed is missing, and even the dog is missing.’” Like many early Neapolitan Mastiffs, Guaglione did not have a lot of wrinkle. But he was an extremely athletic dog.

That last sentence – presumably uttered by the highly respected Solano – was a blow, a verbal death knell for a breed that was already on the brink of extinction. “Nonetheless, I had learned that life is unpredictable and fervent, outside our logic,” continued Scanziani, who bred a handful of breeds under his Villanova banner, including German Shepherds. “It laughs at human ‘nos,’ it laughs at ‘yes.’”

The seeds for the recognition of the Neapolitan Mastiff began on that day, although the modern breed name was not yet in vogue. Cane da presa, or catch dog, was the term used locally, while Scanziani lobbied for “Roman Molosser” – a romantic harkening back to that storied empire with which he was nigh obsessed, although Neapolitan sensibilities would have understandably been offended. In the end, “Mastino Napoletano” prevailed. Scanziani was so enamored of Guaglione that he eventually purchased him, in 1949, when the dog was five years old. Guaglione Primo or Guaglione 1°, as he is often called (there were more Guaglioni to come in the decades that followed) had no pedigree. He nonetheless became, to use Scanziani’s word, the “patriarch” of the breed. Guaglione was bred to Pacchiana, but only one puppy survived. That daughter, Spes di Villanova, was then bred back to her father.

“The life of Guaglione is on the edge between the prehistory and history of the breed,” Scanziani wrote in an article in his Cani magazine in February 1951, comparing the dog to famous ancient founders like Romulus and Moses, who also had unknown parentage. “During my research, I was presented with a decrepit Mastino bitch who it was claimed was his dam, but it was obviously a lie, given in the hopes that I would buy the old ruin. As for the father, I had been given ten names, all of them inaccurate.”

Scanziani knew a handful of hard facts about Guaglione: He was whelped in 1944, probably in March. While he was an adolescent dog, he was acquired by a butcher. At the end of 1945, or perhaps in early 1946, he was sold to Carmine Puolo, a tram worker known in his crowded neighborhood as the “king of Pigna Secca,” because he carried himself with an air of royalty – and not a little Neapolitan eloquence.

Puolo was an ardent lover of mastiffs, and he recognized Guaglione’s quality straightaway. He sold his own mastiff in order to purchase him, reportedly for 30,000 lire, or roughly $170 in today’s dollars. It was a huge sum in those days, in particular in the poverty-striken quarters of Naples.

“And so Guaglione went to live in one of the thousand alleys of Pigna Secca, in a house that looked out onto a courtyard, a house that consisted of one room in which there lived the master, his wife, four or five children, assorted cats and kittens, a Pomeranian with her puppies, some chickens and a lamb, since it was close to Easter,” Scanziani wrote. “The huge Guaglione was tied near a wall of the room with a rope sufficient to hold a bull. In that narrow world – colorful, festive, noisy, sometimes filled with weeping but always spontaneous and lively – Guaglione lived for five years” – until Scanziani purchased him. The inbreeding between Guaglione and his daughter Spes produced the popular sire Ursus della Villanova.

Scanziani lost no time in establishing Guaglione’s place in history: He became the first registered Mastino; he was the model for the first breed standard drafted by Soldati and worked on in tandem with Scanziani; and he became the breed’s first Italian champion, in 1951. (Ironically, Soldano, the famous judge who was so dismissive of Guaglione and the seven other dogs exhibited at that first show, later produced his own version of the Mastino standard.)

Eager to begin his work to revive – or, perhaps more accurately, reinvent – the breed, Scanziani rented space at the zoo in Rome. He then bred Guaglione to a bitch he had acquired at the same time, Pacchiana, resulting in a litter of eight, only one of which survived. That bitch, Spes di Villanova, was bred back to her father Guaglione, producing the well-known Ursus di Villanova, as well as his brother Uno di Villanova and sister Calliope di Villanova. With that inbreeding, Scanziani cemented Guaglione’s genetic impact on the breed.

The Villanova kennel did not produce many Mastino champions beyond those initial breedings, but there were more than enough to jettison the breed on its way. Neapolitan fanciers are quick to point out the many local names who did immeasurable work to help the breed survive and then thrive in those early years. But it was Scanziani who, as a prolific writer and an ardent fan of history, had just the right tools to weave a mythology and a cachet around these rustic Neapolitan dogs. His was the most tricky sort of alchemy, transforming a pedigree-less dog and his rough-around-the-edges cousins into a veritable phenomenon.

You Ought to Be in Pictures

In 1949, Piero Scanziani consulted on a short film called “L’Amico Fidele” (“The Faithful Friend”). In it, he introduces his school for dogs, Associazione del Cane da Difensa e D’Utilita (the Association of Dogs for Defense and Utility), and shows a number of breeds, from Dobermans to Boxers, being trained for obedience, protection and seeing-eye work.

Then we see a crop-eared, dock-tailed dog, with impressively good conformation. “Here is an Italian breed, the Molosser, descended directly from the Roman dog,” says the voiceover, which is supposedly Scanziani, though there is some debate on that. The dog is not identified, but from his side silhouette he could very well be Guaglione.

A Mastino – perhaps the same one – is also shown briefly doing bitework: The narrator describes him as a “young” dog, though Guaglione would have been a mature five years old at the time; since Scanziani acquired him the same year that the film was released, it is unlikely it is one of his offspring.

You decide: Is this the famous Guaglione?

© Modern Molosser Magazine. This article may not be reposted, reprinted, rewritten, excerpted or otherwise duplicated in any medium without the express written permission of the publisher.
Wed, 09/09/2015 - 6:03pm