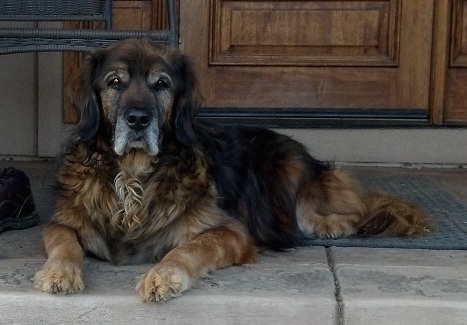 These weren’t just Mastiff mixes. They were the key to conquering blindness in the breed.
By
Denise Flaim

If you poke around on any of the designer-dog web sites, you’ll soon discover that a “Meagle” is a cross between a Miniature Pinscher and a Beagle.

But Mastiff fanciers know better. Their own version of the Meagle consisted of only one litter, whelped in 1999 out of a Mastiff dam crossed to a part-Beagle sire. The six puppies that resulted had an impact on the health of the breed that has been immeasurable, helping to eradicate a devastating eye disorder and saving thousands of unborn puppies from a lifetime of darkness. Rocket the Meagle with his breeder-owner Margot Lauritsen.

Progressive retinal atrophy, or PRA, is a disease of the retina that usually begins with reduced night vision. As the light-sensitive retina at the back of the eye continues to degenerate, the dog experiences progressive vision loss, ultimately ending in blindness. In Mastiffs, PRA has been noted in dogs as young as four months; conversely, Mastiffs as old as three have been found to be normal during ophthalmologic eye exams, only to be diagnosed with PRA before they turn four.   PRA is found in many other breeds, but in all of them, the mode of inheritance is recessive – that is, two parents who are carriers will not have the disease themselves, but can produce it in their offspring. By comparison, in Mastiffs – and in Bullmastiffs, too, presumably because the Mastiff is one of its foundation breeds – PRA is caused by a dominant gene, where only one parent had to carry the gene (and by extension, have the disease) in order to transmit it to the next generation.

But back in the 1990s, the researchers looking into PRA were skeptical that the disease could have a dominant form.

“Several Mastiff club breeders said to me, ‘Why can’t it be dominant?’” remembered veterinary ophthalmologist and professor of medical genetics Dr. Gregory Acland in a 2001 seminar for Mastiff fanciers. “My response to that was, ‘Well, because PRA in dogs is never dominant. Dominant disease has never been established in purebreds.’ And that is generally true.”

But when asked, “How do you know it’s not dominant?” Acland didn’t have a definitive answer. The Mastiff Club of America “decided they wanted to find out for sure whether it was dominant, and therefore agreed to do the thing that I suggested, which I think many clubs would have rejected,” he continued. “And that was to cross an affected Mastiff with a non-affected dog from a totally different breed so that there was no chance that the mate could possibly carry the same gene.” Rocket takes a celebratory turn around the ring at the 2012 MCOA national.

Acland needed a PRA-positive Mastiff, and Margot Lauritsen of Lamars Mastiffs in Brentwood, California, happened to have bred one: “Trouble,” Ch. Lamar’s Nut’n But Trouble, whom she co-owned with Carrie LaBonta. Trouble had early-onset PRA, and had never been bred, but Lauritsen and LaBonta had kept her intact precisely because she might be useful to researchers. With many breeders unwilling to admit they had the problem in their lines, “nobody wanted that stigma,” Lauritsen remembers. Papa was a Beagle mix.

The sire of the litter was “what they call a colony dog – he lived at the research facility,” Lauritsen says. In addition to Beagle, his pedigree included Husky, Poodle and Irish Setter. Lauritsen got to meet “Dad” in person, and she remembers him resembling “a really big Beagle.”

Because they had in-depth knowledge of his pedigree, and had bred him themselves, the researchers were certain that the mixed-breed sire – known simply as “H302” – did not carry any genes for PRA. If his breeding with Trouble produced multiple affected offspring, it would be proof that the disease was produced by a dominant gene, because only one affected parent would be needed to produce it.

To be sure, there were critics of the breeding. Some demanded to know if Trouble had been health screened. (She had, and passed everything but her eyes.) But the science-minded prevailed, and the puppies were placed with five committed Mastiff families.

The Meagles – Rocket, Copper, Murphy, Sabrina, and Stan and Ollie – were a handsome bunch. Murphy looked like a small-scale Mastiff without a black mask, while Rocket and Copper looked uncannily like Leonbergers. “People stopped me all the time to ask what he was,” says Lauritsen, who owned Rocket.   Deb Jones of Maryland kept two of the Meagles, Stan and Ollie. The two were a study in contrasts, with shorthaired Stan delighting in chasing rabbits like his Beagle forebearers, and the more laidback Ollie taking after his more Leonberger-like siblings. Though they never developed PRA, Jones says she was willing to make a lifetime commitment to two potentially blind dogs because Mastiffs in general tend to cope well with eyesight loss, especially those with correctly mellow Mastiff temperament. “A lot of them don’t go completely blind – they can get around a little bit,” she explains, adding that limiting a dog’s exposure bright light will slow the progress of the disease. Meagle brothers Stan (at right) and Ollie. Below, an older Ollie in foreground, after a diagnosis of Addison’s disease; his hair never grew back. Photos: Deb Jones The six siblings had their eyes checked every six months. At 11 months old, Murphy was the first to be diagnosed with PRA by Dr. Acland at the James A. Baker Institute of Animal Health at Cornell University’s College of Veterinary Medicine in Ithaca, New York. Sabrina soon followed.
Those two definitive PRA diagnoses – a third of the litter – was the proof the researchers needed that in the Mastiff the disease was indeed dominant. In short order, they found the mutation responsible, and today a gene test is available from OptiGen that ensures that no Mastiff need go blind from this now-preventable eye disease.
Beyond the Mastiff breed, the Meagles also helped our species, too: PRA is very similar to a human condition called retinitis pigmentosa, and the Meagles provided a large-animal model to test gene therapies for people with the disease.
As for the Meagles, “they were celebrities in the Mastiff world,” Lauritsen remembers. Her Rocket attended every Mastiff national specialty, and in 2002 and he and his sister Copper accepted the first-ever Mastiff Club Service Award award to a canine recipient on behalf of their late dam.
The last of the Meagles, Sabrina and Stan, died last year. When Lauritsen remembers her “gentle mini-giant” – Rocket died at age 12 almost a year after improbably surviving a stomping from a Percheron stud horse and a tumor in his belly – she thinks as much about the joy he brought to her life.
“He was a lot of Mastiff in that he was so gentle and needy – he had to touch you, lean on you,” Lauritsen remembers of her 110-pound boy. “He had the most marvelous temperament. He didn’t know an enemy. He loved everybody and everything. And he was the best dog I ever owned.”
© Modern Molosser Magazine. This article may not be reposted, reprinted, rewritten, excerpted or otherwise duplicated in any medium without the express written permission of the publisher.
Sun, 08/23/2015 - 10:00pm